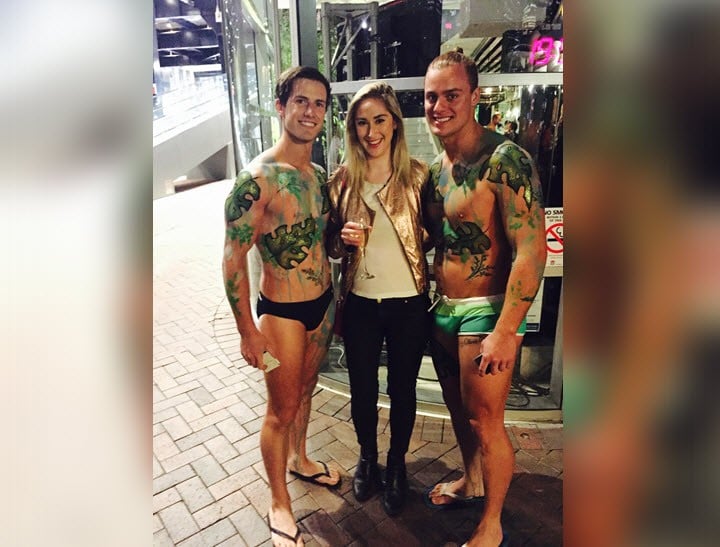 Some of the Mamamia team were invited to an opening of a bar.

It was a pretty standard event. There was free champagne, some Sydney-based celebrities. There was food, and a live performance.

It was enjoyable, but when I recounted the night later to friends, nothing in particular stood out.

But I woke up this morning to headlines that proclaimed the OUTRAGE many felt about this event.

“Outrage over Sydney’s Cruise Bar party as naked women hired as fruit platters” screamed one publication. “‘Is it a bar or a brothel?’ Outrage at Sydney bar’s launch party as they hire women to lie NAKED on tables and act as serving trays – and they are even made to hand-feed guests” said another.

Many feminists took to Twitter to call for boycotts of the bar in light of this huge scandal.

Commenters agreed. The event was a disgrace! This was appalling!

But… I wasn’t outraged.

Rationally and as a feminist, I can definitely understand the controversy.

Women who were stripped down to their knickers and paid to feed sleazy men grapes would usually have me furiously venting to my friends about the misogynistic state of our world.

But I didn’t yell or scream about misogyny last night to anyone except the drunk man calling out “you have nice arses” to my friend and I as we walked home.

I definitely felt the women who were lying topless on the table covered in food was a tired, overused and unnecessary gimmick by the bar.

The Makeup Rules For People Who Wear Glasses

But I thought the same thing about the men posing for photos at the entrance to the bar who were covered in “jungle themed” paint and wearing only jocks.

It was as if the bar owners had read a handbook from the 90s entitled “Sex Sells: tactics for opening your new, hip bar” aloud in a boardroom meeting before looking at each other and simultaneously agreeing they had the secret to a winning formula.

But it wasn’t shocking. It wasn’t new. And I don’t think the gimmick was even that effective.

To be completely honest, I was far more worked up about the mangosteens that featured next to the naked models than the models themselves.

So much so that I took a photo of them, rather than the women.

My indifference may have stemmed from the fact that the models themselves – both men and women – seemed fairly OK with it all.

They smiled. They posed for photos. Then they got up at 8pm and disappeared, with murmurs circulating around the party that they were given a big wad of cash on exit.

Also, all of the guests were prepared for it.

In an event reminder sent around before the event, we were told about the models that would feature with food on them, about the choreographed dance and the contortionist.

And as far as I could see, no-one complained about the naked women (or men) last night. No-one of them threw up their hands and made a statement by leaving immediately.

Instead, a lot of the guests just talked to the models. They learned about their lives and what else they did for work.

Sure, given a plate or a person to eat off, I would choose china over flesh any day.

But I didn’t feel like the women or men were objects.

They were just people who chose to be there, and also happened to earn a lot more for a night’s work than most of the attendees at the party.

Are you outraged by the ‘naked women as plates’ gimmick?

An image with two women hugging has caused ‘outrage’.

This is what a politician looks like when they stand up for their beliefs.

Hold your outrage: Lorna Jane did nothing wrong.

This article kind of touches on a problem. Basically something happens somewhere then it gets on social media then a huge number of busy bodies take offence and howl about it it across the internet. We need to try to shove this genie back in it's bottle. people need to be able to go back to enjoying events without the constant risk of offending people who weren't even there.

Yeah,weird. I dont know why anyone would eat anything of a persons body, I mean, dirt,sweat toxins ewww.