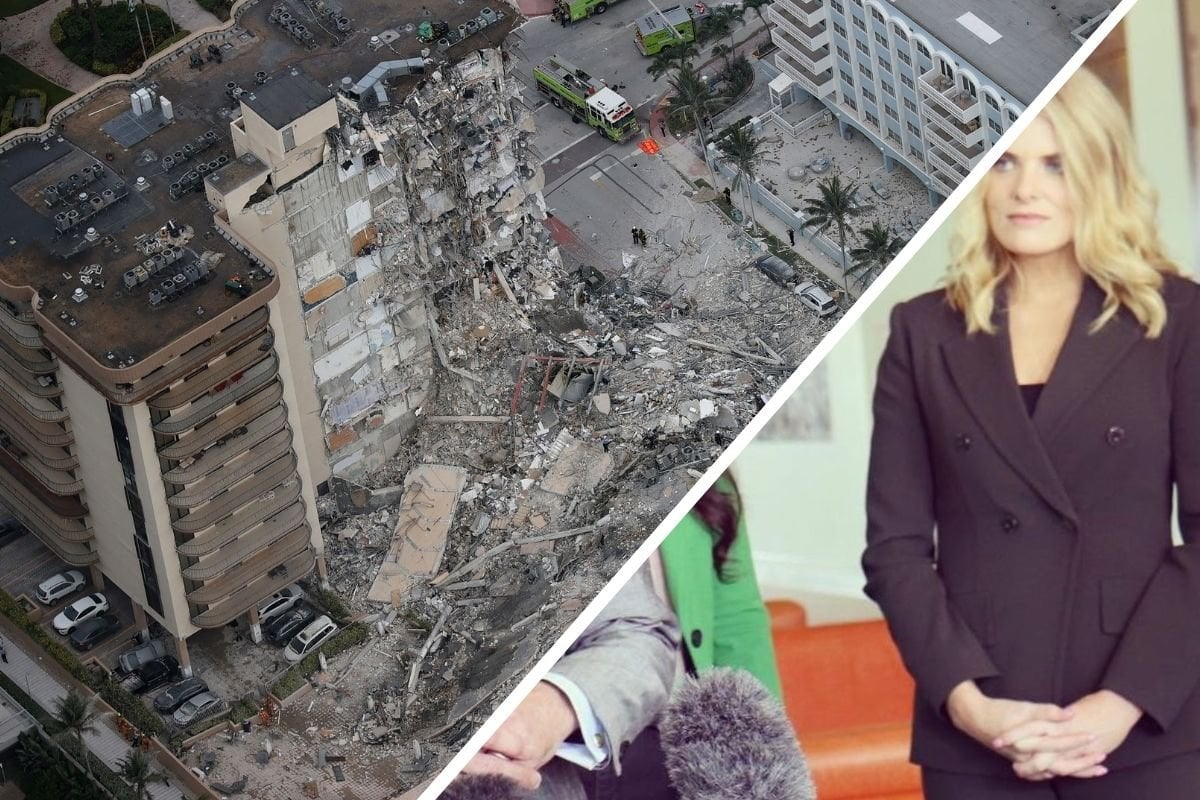 Prime Minister Scott Morrison says he is confident the NSW government can deal with its latest COVID-19 outbreak without shutting down Sydney.

NSW Premier Gladys Berejiklian on Thursday warned the state was entering its "scariest" period since the pandemic began.

Her state has now clocked up 36 cases linked to the outbreak that began in Bondi last week.

All but one of the new infections are linked to a known case or cluster.

Rather than a lockdown, as has occurred in other states, there will be a police blitz to nab anyone defying tough new restrictions.

Other states have responded to the Sydney situation by imposing travel bans or other restrictions on people from parts or all of NSW, just ahead of school holidays.

Mr Morrison said there would be breaches in hotel quarantine, but what counts is how those breaches are followed up.

Just three per cent of adults in Australia have been fully immunised against the deadly disease.

About two thirds of people aged over 70, and about half of over-50s, have received their first dose.

Read more: Everything Gladys Berejiklian has said about the possibility of a Sydney lockdown.

The deputy premier is among those isolating after the state parliament was declared a potential exposure venue on one of its busiest days of the year.

The positive coronavirus result for Agriculture Minister Adam Marshall on Thursday morning threw parliament into chaos, with many of the state's leaders deemed contacts and hundreds of people potentially exposed.

Premier Gladys Berejiklian was tested and cleared on Thursday morning, as was Health Minister Brad Hazzard.

However, Nationals leader Mr Barilaro on Thursday night revealed he had tested negative to the virus but had been deemed a close contact.

He will be tested at least twice more, he said, before he is released from isolation at midnight on July 6.

I have since been tested and returned a negative test result and will be tested again on days 7 and 12, and will isolate until midnight 6 July.

I will continue to perform my duties as Deputy Premier while isolating and adhering to all health advice.

"I will continue to perform my duties as deputy premier while isolating and adhering to all health advice," he said in a statement posted to Twitter.

Parliament House workers were told to stay home on Thursday while a skeleton staff of MPs underwent rapid testing to allow the NSW budget to be passed.

Victorian health authorities are scrambling to find close contacts of a second coronavirus case in the state with links to an outbreak in Sydney.

The man, who works at a dry-cleaning business in the Melbourne beachside suburb of Sandringham, returned a positive test late on Thursday afternoon.

His family has been isolated and are being tested, with the state public health department saying it is urgently trying to understand his movements.

QR code data from the business is being analysed, while his close contacts are being identified and contacted.

The man was a close contact of another worker at the dry cleaners, a man from Oakleigh who tested positive on Wednesday after going to a party at his daughter's house in West Hoxton in Sydney on Saturday night.

The gathering has since been declared a super-spreader event, with more than 12 attendees having become infected.

The Oakleigh man, who is aged in his 60s, returned to Melbourne on Jetstar flight JQ523 that left Sydney at 5.30pm on Sunday.

Hundreds of fire and rescue workers have scoured through tonnes of rubble after a 12-storey oceanfront residential building partially collapsed in southern Florida, with at least one person dead and 99 still unaccounted for, officials say.

Sally Heyman, a Miami-Dade County Commissioner, said officials have been unable to make contact with 99 people who "supposedly" live in the building, home to a mix of people including families and part-time "snow birds" who spend the winter months in Florida.

A fire official said 35 people were rescued from the building in Surfside, a seaside enclave of 5700 residents on a barrier island across Biscayne Bay from the city of Miami, including two who were pulled from the rubble as response teams used trained dogs and drones in a search for survivors.

JUST IN: Video I’ve obtained of the building collapse in Surfside, Florida. pic.twitter.com/BGbRC7iSI9

After speaking with local officials, Florida Governor Ron DeSantis said it was possible that more victims could be found in the rubble.

Built in 1981, the Champlain Towers South had more than 130 units, about 80 of which were occupied.

It was unclear how many people were inside at 1.30am when an entire side of the building pulled away and fell to the ground below.

Authorities in South Florida were responding early Thursday to a "partial building collapse," the Miami-Dade Fire Rescue said. The scene is in Surfside, a few miles north of Miami Beach. https://t.co/1mZcItXpzS pic.twitter.com/vz9LV40Ipt

"It's hard to imagine how this could have happened," Surfside Mayor Charles Burkett told reporters.

Construction work was being done on the roof, he said, but it was unclear whether the project involved any heavy gear.

The deputy prime minister will replace Michael McCormack after toppling him in a National Party leadership spill.

The task force was established to oversee the status of women and coordinate the government's response to two major reviews.

BREAKING: @birmo confirms in response to @jennymcallister in Senate #QT -@Barnaby_Joyce will replace @M_McCormackMP on the Cabinet Taskforce on the Status of Women

Yes, you read that correctly

One review investigated workplace culture at Parliament House and responses to allegations of rape and sexual harassment, while the other recommended a new staff complaints process.

Mr Joyce stepped down as deputy prime minister in 2018 after being accused of sexual harassment.

He fiercely denied the allegations.

At the time of his resignation, Mr Joyce was also under pressure after having an extra-marital affair with a former staffer, who he now has two children with.

Perpetrators can be whacked with fines and jail terms.

A complaints mechanism will support people who don't want to go to the police or through the courts. 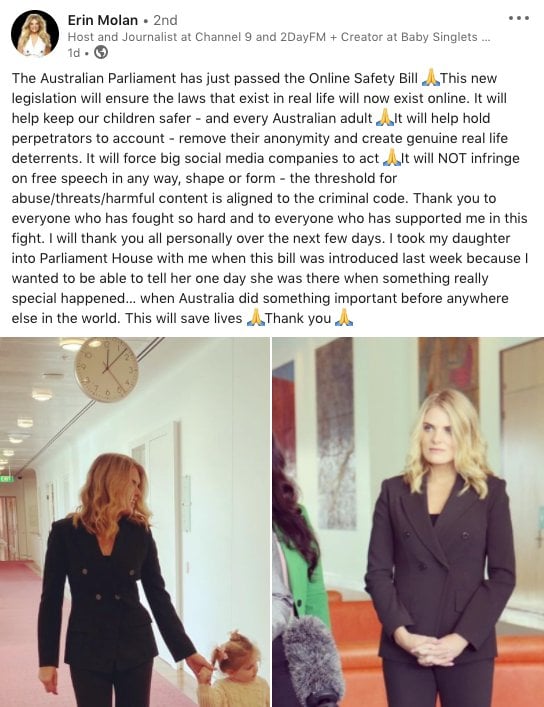 The bill also provides a rapid website-blocking power during an online crisis event, such as the 2019 live-streamed terrorist attacks in Christchurch, New Zealand, that saw regulators helpless while footage went global.

New penalties and powers will take away anonymity from predators on dating sites, internet gambling and private messaging.

China on Thursday lodged a complaint with the World Trade Organisation in the latest escalation of sour relations between the two nations.

Trade Minister Dan Tehan said the normal channels for raising the action were not used by Beijing.

"Obviously China has the right to take this action, but we will vigorously defend the duties that we have put in place," he told reporters in Canberra.

"What we would like to be able to do is not only be able to sit down at the official level and resolve these disputes, but also at the ministerial level.

"But that is not an avenue which is available to us at this time."

Australia earlier in the week launched WTO action against China over wine tariffs that have hit exporters hard, while Canberra also has a complaint about barley before the global body.

Mr Tehan said suggestions of a tit-for-tat trade war needed to be directed at China.

- An appeals court has suspended Rudy Giuliani from practising law in New York because he made "demonstrably false" statements while trying to get courts to overturn Donald Trump's loss in the US presidential race.

- Britney Spears has told a judge overseeing her controversial conservatorship that she wants her life back and for the 13-year long arrangement to end.

In an emotional statement, Spears, 39, said she believed the conservatorship was abusive and that she cries every day and is "not here to be anyone's slave."

Reply
Upvote
5 upvotes
"Joyce to join women's safety task force."
Disgusting. Utterly appaling. But not surprising. This government is a joke.
C
cat a year ago