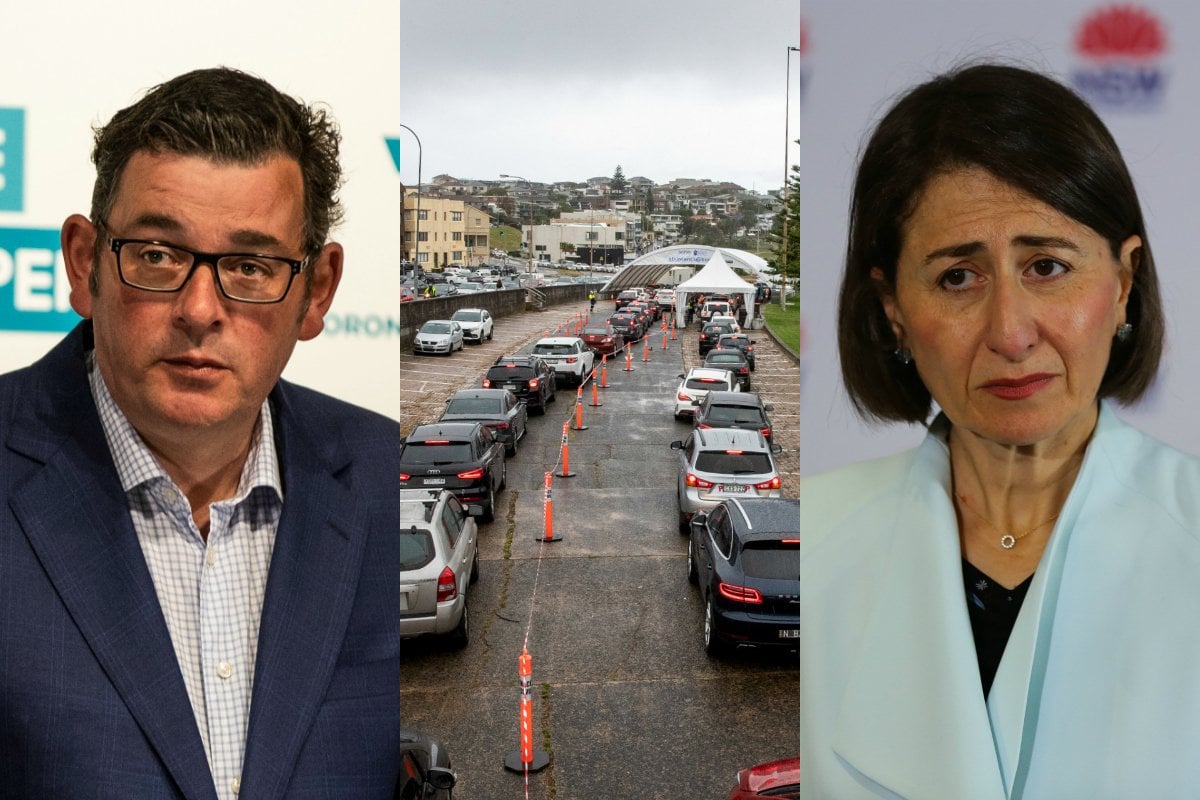 New South Wales has recorded eight new cases of COVID-19 in the 24 hours to 8pm on Monday.

There were more than 44,000 tests undertaken in the same period.

Seven of the eight cases have been linked to the Northern Beaches' Avalon cluster.

The eighth case is a healthcare worker who was involved in the transfer of patients from the international airport, which could be the source of this infection. Genome sequencing will confirm the source later on Tuesday.

A workplace contact of this case has subsequently tested positive after 8pm Monday, and will be included in Wednesday's figures.

At midnight on Monday night, NSW Health updated around 50 venues with case links, right across Greater Sydney. NSW's Chief Medical Officer Dr Kerry Chant urged residents to regularly check the NSW Health website for these venues and the advice linked to them.

She said they were "particularly focusing on venues outside the Northern Beaches".

COVID-19 cases linked to the Avalon cluster have visited many locations across Sydney. A full list of locations and public transport routes, and the associated public health advice, is available from the NSW Government website at https://t.co/pqkRdfh3cR.

Dr Chant said a diner attended the Rose of Australia Hotel in Erskineville between 7pm and 9pm on December 15 whilst infectious, and another diner tested positive on Sunday.

Dr Chant said there were "thousands and thousands" of close contacts in isolation, and they would remain throughout the Christmas period.

"I really appreciate the efforts of people that are adhering to the isolation guidelines and the feedback I've had is people are doing the right thing. So it is important," Dr Chant said.

"We need to remind people that there is a reason we isolate you for 14 days and that's because the virus, even though you've had a negative test today, you can be positive tomorrow."

Berejiklian said she would give an update on what Christmas Day will look like on Wednesday.

Sydneysiders hold out hope for Christmas amid record testing.

Sydneysiders are growing hopeful COVID-19 restrictions may relax in time for Christmas after the number of newly reported cases fell despite record testing numbers.

NSW Health urges anyone in NSW with even the mildest symptoms, such as headache, fatigue, cough, sore throat or runny nose, to come forward immediately for testing, then isolate until they receive a negative result.

The reduction has sparked hope Christmas won't be cancelled for the Greater Sydney region, but Premier Gladys Berejiklian said it was too soon to tell.

"[But] one day's result doesn't tell us a trend," she told reporters on Monday.

No decisions will be made on gathering restrictions for Christmas Day until Wednesday, December 23.

"I would love to be able to tell everybody today what Christmas might look like in NSW or the Northern Beaches, but we're not in a position to do that yet," Berejiklian said.

However, the creeping spread of venues visited by confirmed cases, including a hospital on Sydney's upper north shore, is causing concern.

The Sydney Adventist Hospital in Wahroonga has also informed staff the hospital was visited by a coronavirus-infected person.

In a glimmer of hope, new case numbers have dropped in Sydney as residents rush out in numbers to get tested just three sleeps out from Christmas. @SarahStewart_9 #9News pic.twitter.com/d6ymQ9Dth0

Close and casual contacts have been identified, the hospital cleaned and staff Christmas functions cancelled.

Five cases are now linked to the Turramurra Salon for Hair on Sydney's north shore, and two cases to the Rose of Australia hotel at Erskineville.

Any decision around Christmas restrictions would be based on the prevalence of COVID-19 outside of the Northern Beaches, Dr Chant said on Monday.

"What we're interested in is making sure we don't see any further transmission that is not linked exactly to the Avalon cluster," she said.

Victoria has recorded one COVID-19 case acquired interstate on Tuesday, in a returned traveller who acquired the case on the Northern Beaches of NSW.

The traveller was self-isolating. Vic Health said this stage there are no exposure sites in Victoria.

Yesterday there were 0 new local cases and no lives lost. 1 new case was acquired interstate, 2 international - these cases are in quarantine. 15,521 test results were received. If you have symptoms, get tested and stay home. https://t.co/lIUrl0ZEco #COVID19Vic pic.twitter.com/m7VzFfS3BV

It comes as borders have now slammed shut to Victorians and Queenslanders trying to get home from Sydney, as NSW Premier Gladys Berejiklian pleads with fellow state leaders to rethink their tough response to the Northern Beaches outbreak.

A brief border grace period expired for Victorian and Queensland residents coming from Greater Sydney and NSW hotspot areas at midnight and 1am on Tuesday AEDT, respectively. 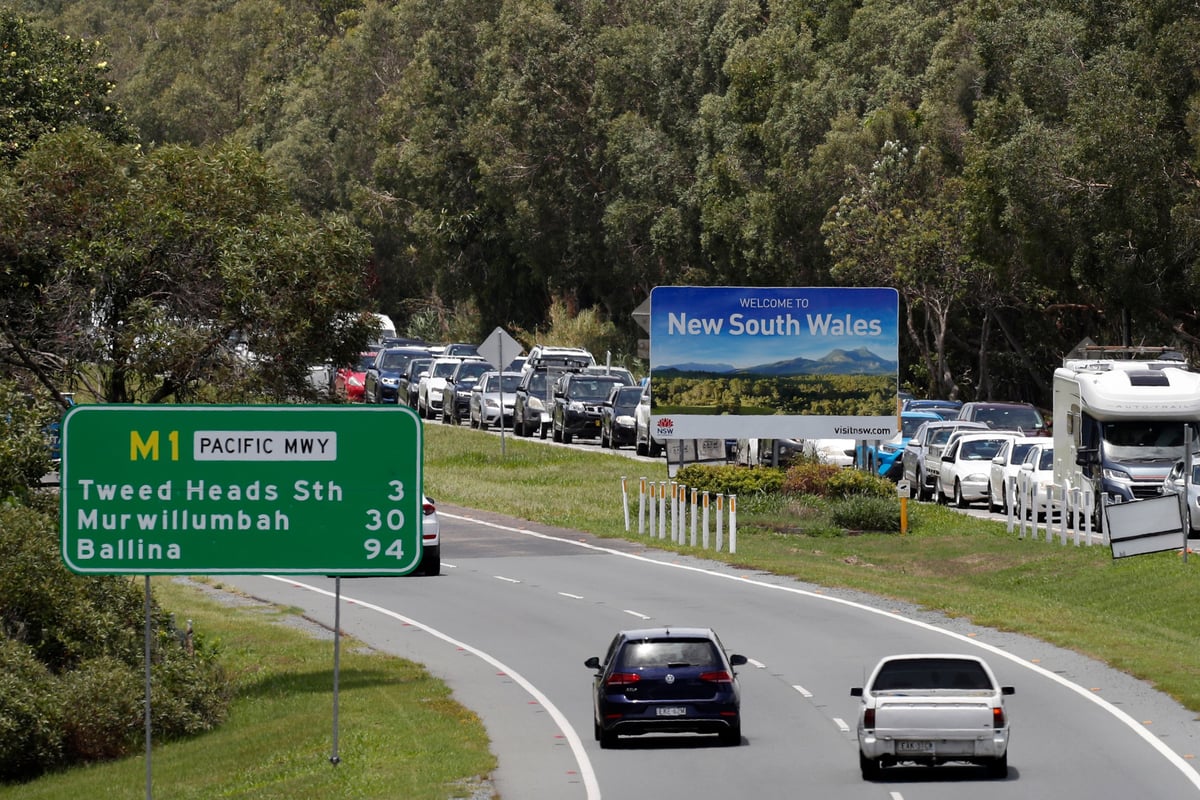 Long queue of motorists waiting to pass through the border checkpoint in Coolangatta on December 21. Image: Getty.

There were reports of long traffic queues southbound on the Hume Highway at Albury and northbound on the M1 at Tweed Heads on Monday evening, just hours before the border closures.

Those who successfully crossed in time weren't required to enter mandatory hotel quarantine, but must instead spend their 14-day isolation period - including Christmas Day - at home.

It comes as Berejiklian made a last-ditch bid to get her state and territory counterparts to consider the "heartbreak" of tighter border restrictions at Christmas.

Residents of Greater Sydney have been locked out of most jurisdictions across the country because of the Avalon cluster, which grew to 83 on Monday.

"It impacts not just people in NSW, but people in your home states that may not have been reunited with family or friends or significant others for a long period of time," she said.

Her appeal did not deter her Queensland counterpart Annastacia Palaszczuk from announcing on Monday afternoon a hard land border will be reimposed from 6am on Tuesday.

Palaszczuk said there was no other option after police caught almost 200 Sydneysiders in 24 hours trying to enter her state illegally.

Jenny Mikakos hit out at her old boss on Monday night, hours after the release of the final report into the scandal that ultimately led to her resignation.

She said the $5.7 million inquiry had "failed to answer key questions", with retired judge Jennifer Coate unable to identify a single person responsible for the fatal decision to use private security guards in the program.

"I believe Victorians deserve to know the truth about an event that has so profoundly impacted them," Mikakos said in a statement.

"They do not need another masterclass in political deflection from the premier."

Former Hlth Min Mikakos is demanding for #Andrews to release his phone records of March 27. The Premier must do the right & decent thing. Stop the spin & call a #RoyalCommission to get to the truth. #801😪#springst https://t.co/A35Z0JKj1e

She's called on the inquiry to release Andrews' redacted phone records from March 27, the day before the hotel quarantine program began, for the sake of public transparency.

Mikakos, DHHS secretary Kym Peake and Department of Premier and Cabinet secretary Chris Eccles have already quit over the scandal.

Despite the report effectively clearing Andrews, Mikakos and other senior ministers of making the decision to hire guards, opposition leader Michael O'Brien is calling for the premier to follow their lead.

"No political leader should be able to survive this type of failure," he told reporters.

But Andrews is standing firm.

The premier apologised for the botched program, blaming lack of time when the program was established in March for the errors that led to Victoria's second wave.

"I want to apologise to the Victorian community for the very clear errors that were made in this program," Andrews said.

"I think that the way in which the program was established... it had to be done quickly. That's the nature of a global pandemic. There is no rule book as such."

Coate made 12 recommendations on top of 69 in the inquiry's interim report, including updating Victoria's pandemic plan and further exploring mandatory testing for returned travellers.

Andrews said his government plans to adopt all 12 recommendations, after spending the summer considering the report in detail.

The European Union has given official approval for the coronavirus vaccine developed by BioNTech and Pfizer to be put onto the market across the 27-nation bloc.

We have just authorised the first COVID-19 vaccine!

Following the recommendation of the European Medicines Agency, we have granted a conditional market authorisation for the BioNTech/Pfizer vaccine
#EUVaccinationDays will start soon. pic.twitter.com/FppyImv2jM

"This is really a historic scientific achievement," Emer Cooke, the head of the EMA, said.

"It is a significant step forward in our fight against the pandemic."

Read more: Everything we know about the new strain of COVID-19 rapidly spreading around the world.

Cooke played down concerns that the vaccine might be ineffective against a new strain of the virus detected in Britain.

"There is no evidence to suggest that the vaccine will not work against the new variant of the coronavirus," she said.

Deliveries of the vaccine had been pencilled in to start this coming Saturday, with inoculations beginning across the EU between December 27-29.

Half a million people have already received the first dose of the Pfizer vaccine in the UK.

Australia's wheelchair tennis star Dylan Alcott has capped a memorable 2020 by finishing the year as the International Tennis Federation's world No.1 for quad singles.

He added an eleventh in October, when he defended his French Open crown with a 6-2 6-2 victory over his doubles partner Andy Lapthorne at Roland Garros.

"In such a strange year, it is a massive honour to finish the year as world No.1," Alcott said.

"A big thanks to my team and everyone who supports me. I also want to send my love to everyone who has done it tough in 2020.

"Let's hope we can all keep working together and get ready for a – hopefully – brighter 2021!".

- US President-elect Joe Biden has received his first dose of the Pfizer COVID-19 vaccine on live television, in keeping with public officials' efforts to show Americans such vaccines are safe.

- Two men have been found guilty of the manslaughter of 39 Vietnamese migrants found dead in a lorry trailer in Essex, UK in October 2019.

- Residents in Hawaii have been asked to stay indoors after the Kilauea volcano erupted on Monday following a series of earthquakes.