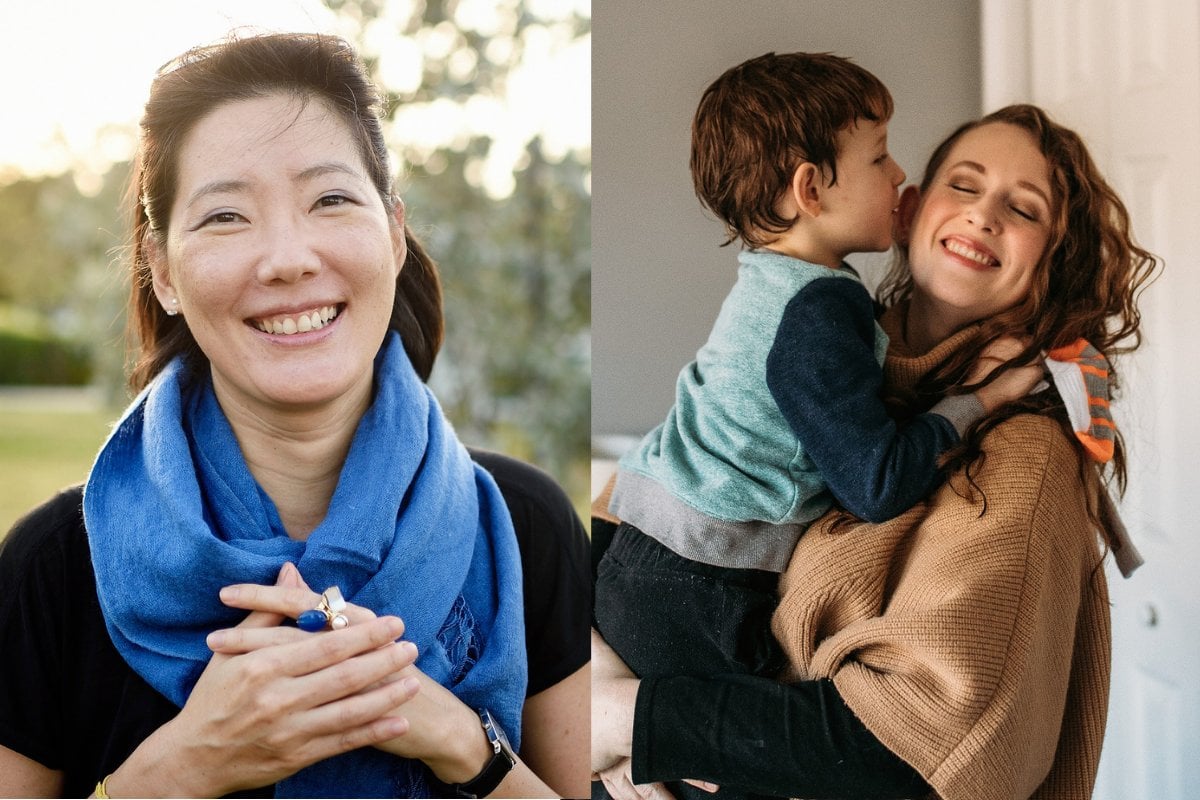 We all occasionally say a swear word. Some of us, more often than others.

It might be because we stubbed our toe, came in contact with a bad driver or just needed to use one for emphasis.

But when we become parents, there's something extra to consider - whether it's appropriate or not to swear in front of our kids.

What words can we say? When can we say them? Are they going to repeat them at school?

So we spoke to 18 parents from the Mamamia community to hear whether they swear in front of their kids. And their answers were varied.

1. "My kids are now 14, 17 and 19. I tried not to swear when they were little so they wouldn't think it's a normal part of speech. The point of swearing is it's for exceptional circumstances so it should be used sparingly. These days our 'swear line' is: we can swear about things but not at or about people. And not so much that it becomes a habit. Be aware of who you're speaking to and who you're around. Think about what they might consider acceptable and offensive. When in doubt, don't." - Kate.

3. "We don't. But I will say things like, 'for crying out loud, bugger, crap, codswallop, etc.' Our kids are three, four and six months. My Mum didn’t let me swear until I was about 16. I still don't swear in front of my grandmother. I’d say once the kids are late teenagers we will let it go." - Bec.

4. "We swear around our three-year-old son. I’m not bothered about swearing at any age as long as it’s not AT someone. E.g. 'you f**king loser' is not okay. But saying 'f**k' when you stub your toe - that seems okay to me." - Maz.

5. "We TRY not to. Try being the operative word. We have a four-year-old that repeats everything and six-month twins. We stopped swearing in front of them from birth." - Sammie.

6. "I swear in front of my son and always have. He’s 10. He knows that they aren’t appropriate for kids to say until he’s older. At the same time though, they are just words. He’s said sh*t a few times and I’ve just let it go, it’s not hurting anyone. As long as he’s not using them to insult or bully people then I’m not worried." - Patricia.

7. "Never (unless the very rare word whilst driving when someone pulls out in front of me, etc). I don't judge others that do. I feel like it gives our home a calm, safe, gentle vibe." - Jacinta.

8. "I'm going to sound like a complete bogan, but my husband and I both do and always have. However, our kids never swear, and they completely understand if they do, in what situations it's appropriate or inappropriate. My parents have always sworn in front of me." - Anthea.

9. "I have never censored myself in front of my kids. I am who I am and I swear. I’m not a potty mouth but I swear. My kids are 13, 11 and two. They have done the toddler swear that we all laugh at and my 13-year-old will sometimes have a swear. But I have raised them to know that they are adult words and cannot say them while they are children. At the end of the day, for me, they are just words." - Peta.

10. "By the time they hit high school we threw in the towel! Copious swearing. The thing is, they learned from us when to and when not to swear." - Carol.

11. "If I slip up my older son (who is nine) giggles and says 'you’d better not say that in front of Cal' (his six-year-old brother who is most likely to repeat it!). Once when Callum was four he casually asked me to help him 'get this f**king hat off of Mr Potato Head'". - Amie.

12. "Yes and proud of it. Kids know when to do it and context. Caring about swearing is overrated." - Sally.

13. "Time and place! At work, school or after school sports it’s a nope. My 10-year-old swears when he’s frustrated and I know he got that from me. My middle child is an angel and reminds my eldest to watch his language. My two-year-old has sworn in context though and only a few times." - Ange.

14. "No! I'm a real prude when it comes to 'bad' language around children. My father was strict with swearing when I was young and I suppose it's just stuck. I think it's awful hearing it from the mouths of babies." - Belinda.

15. "We're not big swearers ourselves but our older kids are in high school now so they hear it at school all the time. We tell them that it's important to pick your audience. It's ok to swear around your friends but not at someone, and not around teachers or grandparents." - Kath.

16. "When my kids were little, I used to let them say every swear word they knew from the bottom of the driveway to the top (about four seconds). Hilarious!" - Susan.

17. "My daughter is now almost 17. I always swore, can't help it, and thought she would copy. She never did. Even if she was telling me another child said a bad word, when I asked what the word was she would clasp her lips together and shake her head. Never said it. I always taught her kids didn't swear, I was a grownup so I was allowed." - Mel.

18. "Well, I didn't think I did... until a few weeks ago when my five-year-old daughter told her younger sister to 'stop being such a dickhead'... then I realised that I must!" - Kathryn.

Do you swear in front of your kids? Let us know in the comments.

anon- a month ago

Reply
Upvote
1 upvotes
I have always spoken normally around my kids - swear words and all.  There are many things that adults do that kids aren't allowed to do, and I view swearing as no different.  So I always told them that whilst adults were allowed to swear, they were not allowed to until they were a lot older, and they accepted that.
msd a month ago