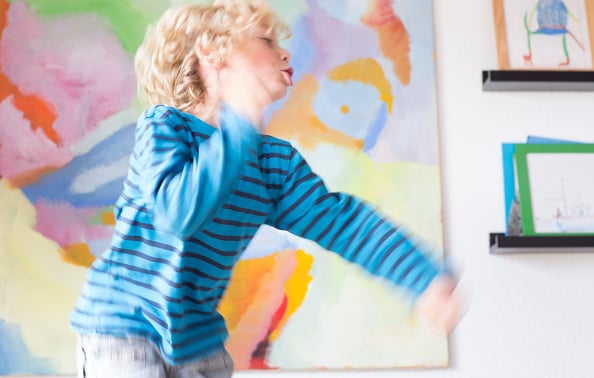 Because we all need this guide.

Kids tend to save their meltdowns for the most inopportune moments – supermarket checkouts, quiet cafes, the moment you are trying to leave the house in the morning.

Tantrum triggers can start as early as breakfast, with the bambino freaking out about getting the blue bowl instead of the red one, and go on right to the end of the day, when they’d rather run around naked than get into bed. It’s no wonder you’re frazzled and exhausted!

Since it’s pretty much impossible to completely prevent tantrums (just like the weather, you just have to be prepared for those morning storms and afternoon downpours), we’ve come up with eight tried and tested ways to get through these long years so you can spend less time stressing and more time enjoying the fun bits.

Be organised. Rushing your children causes stress for all concerned. Allow extra time and give plenty of warning about what is going to happen: “Jack, in five minutes we will be putting our shoes on and going to school”. Not only are children slow at getting ready, they often decide to gather up all their toys or put a certain dress up costume on, only telling you as you open the door to leave. Slowing down and listening to them will save you time and energy in the long run.

It’s important to set expectations before you leave the house or start an activity. Use repetition and ask your child to say your words back to you to help reinforce the goals: “We’re going to the supermarket to buy some food. We’re not going to buy a toy.” Meltdowns are often caused by not clearly setting boundaries. Children who are allowed to jump on the furniture at home will not understand why they cannot do the same when out and about. Decide what is important to you and stick to a few simple rules.

Stars can help kids shine! Make a list of the things you want your child to improve on each week or month, such as holding your hand when crossing the road, eating their vegetables or going to bed without a fuss. Buy a ready prepared chart (or save money and create your own at home) and add a sticker each time your child behaves. Make sure there’s a prize at the end: good reward ideas include a family outing, pizza night or a new toy.

4. Shout shout, let it all out

Allow your toddler to scream and release any frustrations – it’s important they know it’s okay to express how they feel. But as prolonged emotional outbursts can be exhausting for all concerned, it’s best to nip things in the bud as quickly as possible. A great technique is to hold your child close (if they let you!) and place their belly onto yours, saying the words “breathe” over and over. This often slows them down, calming their emotions.

We generally think that everyone is watching the horrible scene unfold, but the likelihood is most people are actually far too busy getting on with their own lives to care. If people are looking, remember that you will probably never see them again. It’s also likely that they’re also parents who are secretly relieved that it’s you in the firing line today and not them.

When you feel overwhelmed, step away from the situation (making sure your child is safe and that they can see you) and give yourself a few minutes to calm down (keep some Rescue Remedy in your handbag; there’s even a kids version). Be a picture of control and do not add your own anger to the mix, it will only exacerbate the situation. Try to see the funny side and remind yourself that period will pass… in a few years!

7. Keep them fed and watered

This sounds obvious, but hunger, thirst and excess energy are tantrum triggers. Good meals, small (non-sugary) snacks, plenty of water and exercise throughout the day will help ward off unnecessary meltdowns. When weather allows, let them run around in the park, dig holes on the beach or build dens in the garden.

Once your child has finished throwing their tantrum, make sure they know how much you love them by telling them and having a hug. Choose a fun activity to shift the mood, such as singing a silly song, dancing together or running a race. This will reinforce your love and move the situation on. The ages of 1 to 3 might be a steep learning curve for parents – but there’s also a huge amount of laughs and fun to be had.

Any other tips you want to add to this list?

Kate Longworth is a blogger and is a mum of three boys.

This article originally appeared on Mum's Grapevine and has been republished here with full permission.

And if your little one has any of these names, they're more likely to be naughty (according to science). it's based on a scientific study.

The toddler tantrum that almost broke me.