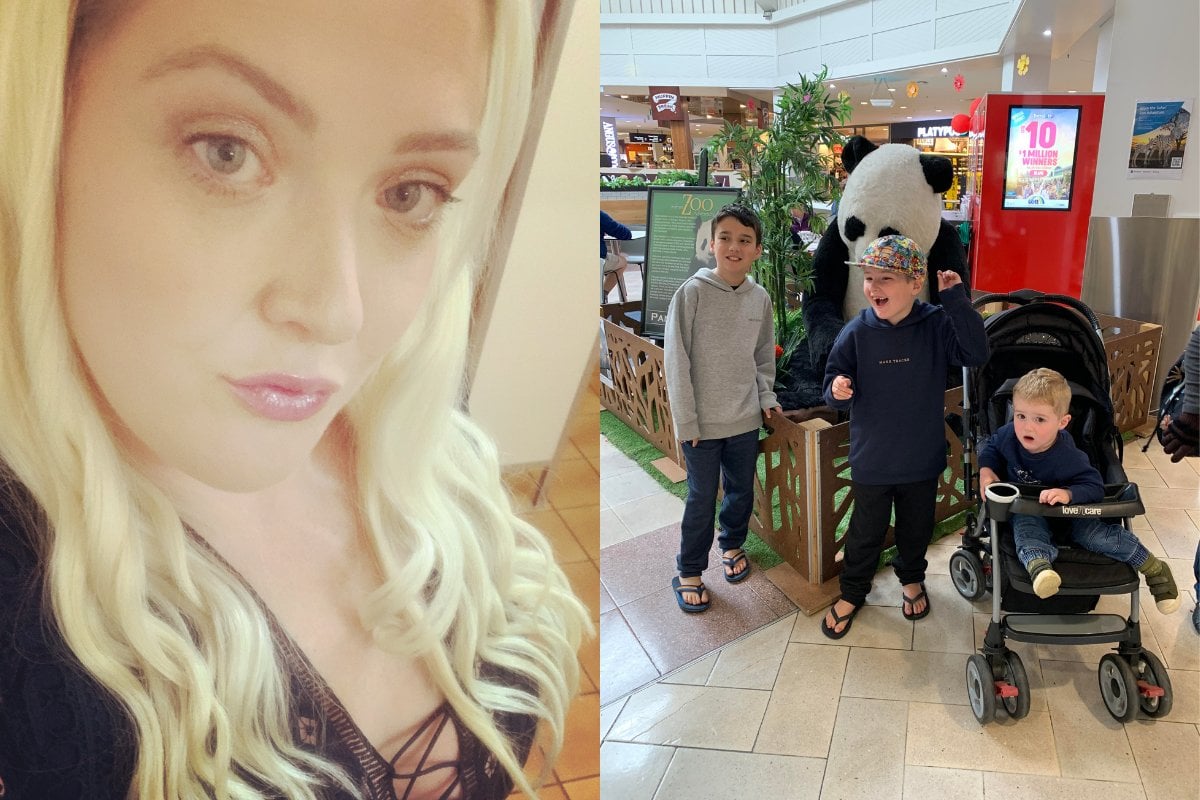 This week we profile Melanie Davidson from Ballarat in Victoria, who is mum to three boys: Alex, Declan and Xander.

Melanie was a single 20-year-old bartender with ambitions to travel the world, when on Wednesday 6 January 2010, she began feeling unwell.

Watch the trailer for Mamamia's birth podcast, the Delivery Room. Post continues below.

“I had just finished a late shift when I started getting bad cramping pains,” Mel tells Mamamia.

“At first, I thought it was just my period so I got through Thursday, but by Friday night, it was a whole lot worse.”

Mel was living with her mum at the time, who thought that maybe Mel was constipated and just needed to go to the toilet.

“We were sat together watching the final episode of Lost on DVD. I’ve always had a bit of a pot belly but by then, I felt really bloated and the pains were horrific.

“Mum kept telling me to go to the bathroom and as I sat myself down on the toilet I felt a sudden urge to push. As I pushed, water began gushing out from between my legs and I was freaking out as I knew that was definitely not normal!”

Mel yelled out that she thought she was having a baby.

Initially, her mum thought she was being dramatic, but as Mel’s cries got louder, she came in to see what was going on.

“By that stage I could feel the top of a baby’s head coming out so mum dashed next door to alert the neighbours and then rang triple zero. They told her to get me onto the floor and off the toilet and to fetch towels.”

Mel describes how she has blocked out some of the detail, thanks to the pain and the shock.

“I do remember six tall and stocky paramedics appearing out of nowhere and being squashed into our tiny bathroom and hallway while mum delivered the baby’s head. One of them had to step in to help guide out his shoulders, which was the worst and most painful part of all.”

Once baby Alex was out and in Mel’s arms, there was no time to rest. The paramedics wanted to get them both to hospital for routine checks.

“I had just given birth on the bathroom floor, not knowing I was pregnant, but I had to get straight up, walk down the hallway, up a steep driveway and climb into an ambulance. All while holding my newborn son who was still attached to me by the umbilical cord.”

“In hospital surrounded by doctors and nurses, I was in shock. I didn’t want to hold him because I was still coming to terms with what had just happened.

“My mum had to call my boss at work to say I wasn’t able to work the next day because I’d just had a baby. He couldn’t believe it and nor could my best friend Ebony who initially thought I was joking.”

As Mel settled into the maternity ward the next day, she had to quickly get used to being a mum.

“While it turns out I had probably been in labour since Wednesday, the birth had happened in around 30 minutes. I had literally no time mentally or emotionally to prepare for motherhood.

“There had been no signs during the pregnancy as my periods had continued as normal, I hadn’t felt sick and as a usual size 8-10 I had not put on any significant weight. This is crazy when I consider baby Alex weighed a very normal 3.3kg at birth.”

Mel and baby Alex stayed in hospital for longer than usual to help her adjust to life as a new mum and to ensure the house was all ready for Alex’s arrival.

“It was January and in the middle of a heatwave and mum had no aircon in the flat. She had to go out and buy a portable unit and she also drove down to my sister’s house to collect some second-hand baby things courtesy of my then one-year-old nephew. Friends and family were very kind gifting us things too.”

After the initial shock wore off, the hardest part for Mel was telling her ex-partner, baby Alex’s dad of his new status.

“Our relationship hadn’t ended very well in September 2009 and I was scared to tell him about Alex. I decided to call his brother first who could then break the news. When we did speak, it was awkward but he stepped up and soon began seeing him every second weekend.”

Following a full week in hospital, Mel moved back home with her mum who took three weeks off work to help out. Life slowly took on a new rhythm and while her travel plans were put on the backburner, she felt happy and well supported.

“My boss was great and told me that anytime I wanted to go back to work, I could. As it happened, I didn’t return to work until 2017 after Alex was diagnosed with Type 1 Diabetes in 2012. I also met my new partner Anthony in 2014 and soon became pregnant with baby Declan.”

Although Mel’s second pregnancy was much more ‘normal’, she almost ended up with another surprise when it came to baby number three.

“I knew straight away I was pregnant with Declan as I had morning sickness and my periods were late. Then in mid 2019 and after a diagnosis of endometriosis, I went to hospital thinking I was experiencing a particularly bad endo flare up.

“As I sat on the bed waiting to be seen, they asked if I could be expecting. I thought it was very unlikely as I had been bleeding heavily. However, when they did an ultrasound they discovered I was already 25 weeks pregnant.”

Baby Xander was born in June 2019 and while Mel won’t be having any more babies due to a recent hysterectomy to try and ease symptoms of her endometriosis, she is grateful she began her journey to motherhood at a young age.

“Becoming a mum in 2010 was certainly a huge and unexpected surprise, but I realise now how lucky I am to have my three boys. They share a beautiful bond and I thankfully I am still young enough to travel and see the world once they’ve grown up.”

I
ican'tthinkofone a year ago

Reply
Upvote
2 upvotes
Far better sex education is needed in schools and free contraception. I teach reproduction in Science class to high school students who are already having sex but have no idea about their own bodies and put themselves at risk with unprotected sex most weekends.
T
talezassian a year ago