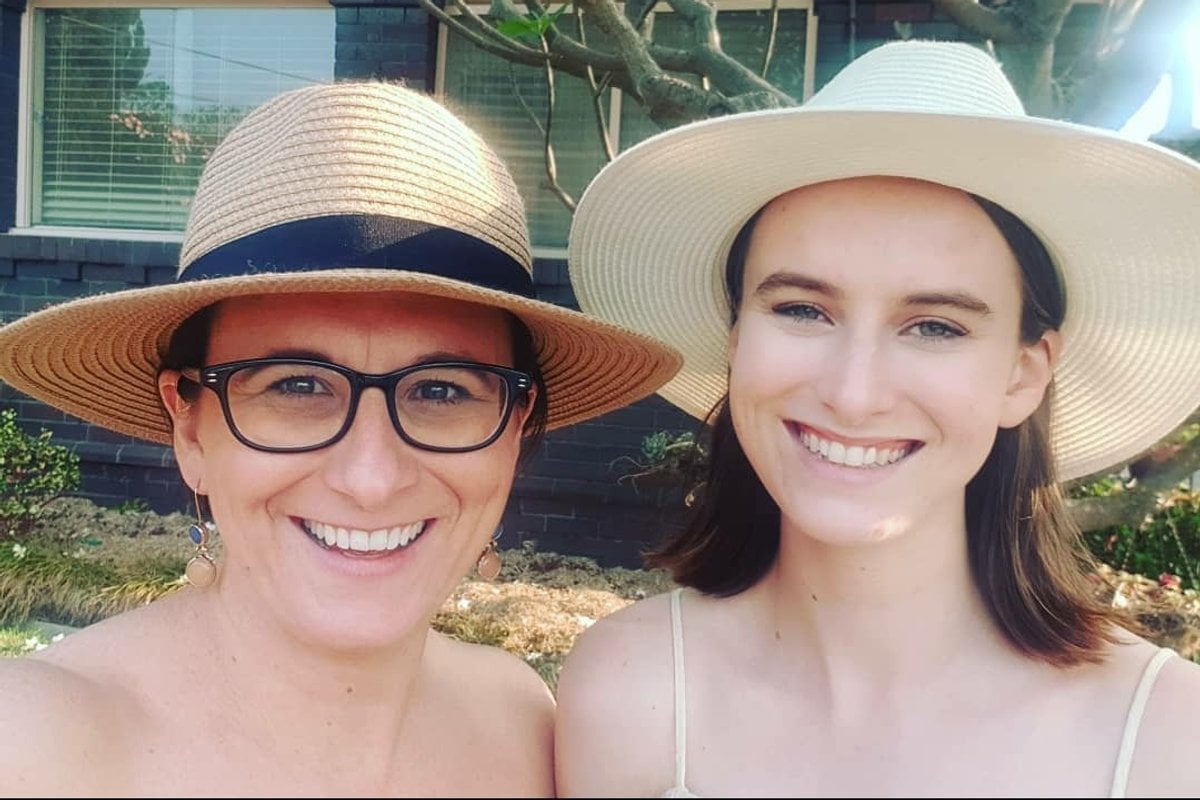 Birth: there's nothing quite like it, and it's clear no two birth stories are the same. Which is why we're asking everyday women and some of our favourite celebrity mums to share theirs, in Mamamia's My Birth Story series. If you have an amazing birth story to share, let us know by emailing some details to:  [email protected] and including 'My Birth Story' in the subject line.

Nineteen-year-old Prue Thomas was working a morning shift in her hospitality job, when she suddenly started getting lower back pain.

“At first I thought I had hurt my back moving furniture around,” Prue tells Jessie Stephens on The Delivery Room podcast.

“I was sent home early from work and soon after that my tummy really began hurting, and it started to expand. I was supposed to be playing netball, but I was in so much pain and so swollen that my sister called my mum, who called an ambulance.”

Watch the trailer for Mamamia's birthing podcast, The Delivery Room. Post continues below.

Prue had previously suffered from Irritable Bowel Syndrome and thought this bout of severe abdominal pain was likely related. When she arrived at the emergency department the examining doctor uncovered the truth pretty quickly.

“He was pressing my stomach and asking if it was painful. I could feel pressure but it wasn’t excruciating. Then when he pressed lower down I was like, ‘oh my God’ and thought I had wet my pants. I was embarrassed and knew it wasn’t normal.

“The doctor disappeared and returned with a heart monitor that he put over my stomach. He confirmed I hadn’t wet my pants, but that my waters had broken and I was in labour.”

Prue was in complete shock as were her parents who by that time, had both arrived to support her.

“I kept thinking; ‘how is this possible? It doesn’t make sense!’ I had been having a regular period the whole way through and while they weren’t as heavy as before, it was not different enough to make me go and get a pregnancy test.”

Prue’s weight remained fairly consistent throughout and she hadn’t experienced any other obvious physical signs of pregnancy.

“I recently finished high school and had been on ‘schoolies week’. I had a bit of a belly, but thought it was some weight gain because I’d been out partying, not that I was growing an actual human.

“I didn’t get morning sickness or feel any kicks, but I remember lying on the lounge one night with my sister and moving my tummy around and saying ‘look at this’. My sister thought it was pretty gross and we both thought my bowels were weird.”

In hindsight, Prue says there was one night she recalls feeling out of sorts.

“On my 19th birthday, a group of friends came over for cake before we went out clubbing. I got all emotional over something someone said and I went upstairs to my bedroom to cry it out. This was pretty out of character for me, looking back.”

As Prue came to terms with the shock of being pregnant, the unwavering support from her parents in the birthing suite made everything okay. Thankfully, her surprise labour was also relatively short and manageable from a pain perspective.

“I had the ‘little green whistle’ (an inhaled pain relief) but there was no time for an epidural or birth plan. There was a very calm and lovely midwife with me the whole time and while it was painful, I just remember swearing a lot and feeling an intense need to push.”

By 2.20pm that afternoon, a healthy and beautiful baby girl named Meghan was born; less than six hours after Prue felt lower back pain at work.

“When she came out, I spent a lot of time staring at her and marvelling at what had just happened. It was shock, but not a terrible shock – I just had to think about what I was going to do next and what my life was going to be like.”

Initially there was some discussion with Prue’s parents about whether or not she would keep her baby.

“I wasn’t particularly maternal and I hadn’t thought about meeting the man of my dreams and having lots of babies, but I knew straight away when I looked at Meghan that I wanted to keep her.

Prue’s parents called her sister who at that stage had no idea she was about to meet a new member of the family.

“My sister had been playing netball with our closest friends, so mum called them to say they were all aunties. They were shocked too, saying they thought I just didn’t want to play netball.”

Without any time to prepare for becoming a mum, Prue had nothing ready for baby Meghan at her parent’s house where she was then living.

“I had arrived at hospital that morning as a 19-year-old girl. I was so unprepared. My mum and dad put the word out and organised a bassinet. They also told all my friends and their parents, who were so kind. They banded together to get baby items and clothes, which was lovely.”

Prue also had to decide if and how to tell baby Meghan’s father. She wasn’t sure if she wanted to, but felt he had the right to know.

“It was a very awkward conversation as I had to explain that I had no idea I was even pregnant but that I’d had a baby and she was his. There were accusations and he didn’t really believe it. Sadly, that ended any contact Meghan had with her father as he wanted nothing to do with us.”

Prue stayed in hospital for a few extra days to ensure she knew all the basics before heading home as a new mum.

“I had to do all the pre-natal classes post-natal; things like how to change a nappy, how to bath and breastfeed a baby. There was quite a bit to learn.”

While Prue’s close family and friends have always supported her decision to raise Meghan, others commented that as a young mum of 19, she had ‘ruined her life’.

“The comments hurt, but they also made me more determined to have a career and a life. Yes, I wasn’t able to go out and get drunk with my friends at the weekend, but I wasn’t too sad about it. I had this gorgeous little human that needed me and wanted snuggles instead and it just didn’t compare.”

“I have had to prove time and again that I can do this. I have had a great career and still have a great career. I also have a wonderful daughter, who I have travelled the world with. I did not let having a child at 19 ‘ruin’ my career or my life. I may have just taken a little longer to get there and it was hard at times when she was younger, but I managed it.”

Prue’s shock labour and the birth of baby Meghan also had a positive effect on her extended family.

“My parents were divorced back then, but Meghan made them have a relationship for her sake. We all had to adjust and get used to having a precious little baby around, but ultimately her arrival brought us all closer together.”

To hear more stories like Prue's, listen to The Delivery Room in your favourite podcast app.

Birth: there's nothing quite like it, and it's clear no two birth stories are the same. Which is why we're asking everyday women and some of our favourite celebrity mums to share theirs, in Mamamia's My Birth Story series. If you have an amazing birth story to share, let us know by emailing some details to: [email protected] and including 'My Birth Story' in the subject line.