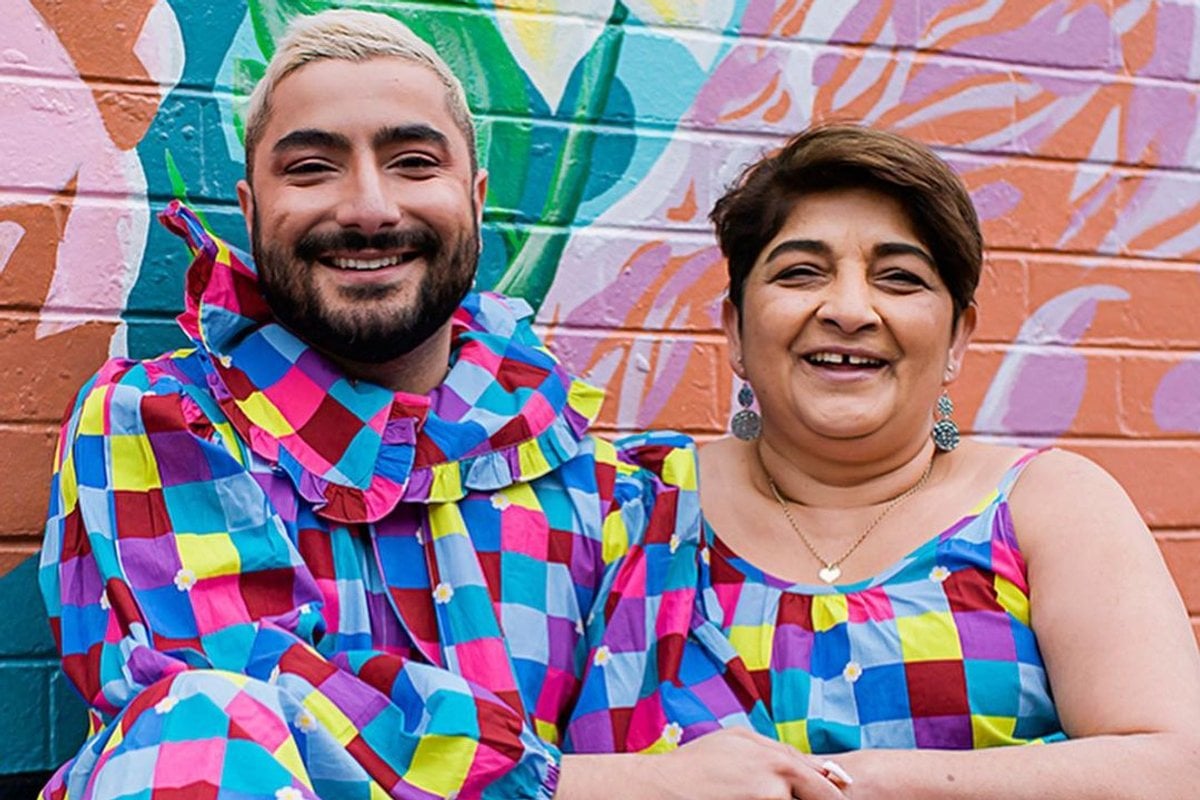 Deni Todorovič is an out and proud non-binary trans person, spreading awareness and advocating for the queer community. And while it hasn't always been easy, they have the support of their wonderful parents.

Deni joined Leigh Campbell and Tegan Natoli for a chat on This Glorious Mess to talk about their journey to coming out to their parents and how other parents can support their kids in the same position.

"I've been truly blessed with the parent jackpot," Deni says.

"Mum and Dad had me when they were 21 years old, so they were young parents. And so we always grew up with like a best friend kind of vibe."

"A lot of my friends would say, 'But why would you tell your mum and dad?'. But who else could give me better advice than the people that brought me into this world? And they just always have this kind of open-door, open-heart policy is what I call it."

Watch: Superwoman is dead! This is why. Story continues below.

The first challenge Deni faced was coming out as gay to their parents at 19 years old.

"My parents are Jehovah's Witness and ethnic, so I won't lie... it was really bloody hard. But their open door, open heart policy and our friendship made it a lot easier for me than for other ethnic boys I know who came out as gay and had their dads shun them forever. I was very lucky."

When Deni realised they were non-binary, they wanted to tell their parents in order to live freely, but it wasn't easy for the family.

"It was really hard and a lot like a second 'coming out', something I never thought I'd have to do.

"We were in lockdown at the time and I'm actually really grateful it happened in lockdown, because when I came out as gay, my mum's primary concern was, 'What would our community think? What would your grandparents think?'

"But in lockdown, because we couldn't go anywhere, couldn't see anyone, we had a bit more privacy to heal through this change as a family. But it was really hard and my mum was very scared."

Deni says that their mum's first response came from a place of fear and misunderstanding.

"She said many things like, 'You will never get married now. Who's going to love you?', 'This is going to be so hard!', 'Are you going to change your name?', 'What does this mean?'

"She was worried that she had lost her son because parents of trans kids, no matter what age, go through a grieving process."

Deni relates this to Kris Jenner's experience with Caitlyn Jenner's transition in Keeping Up with the Kardashians.

"I'll never forget that scene where Kris Jenner is crying because she's smelling Bruce's blazers and she wonders if Bruce is dead now. That's kind of what parents go through when their kids transition.

"So I had to say to them, even though I've come out as non-binary and I'm a trans person, I'm still your son.

"I'm still Michael's brother. I'm still Sophie's uncle. Those terms don't have to change. The only thing that has to change are my pronouns. My name is still Deni.

"You know, it was hard, and it took some time. It was probably a solid three months."

Listen: Deni chats to Leigh and Tegan on This Glorious Mess. Story continues below.

After the shock wore off, Deni could be their true authentic self around their parents and the wider community.

"The first time I went to my parents' café for brunch in a pair of jeans and some Tony Bianco heels, I felt like a new person. I thought, I can just sit here in my heels at brunch and no one's going to think, 'What's Deni doing?'"

Deni's parents soon became quite comfortable with the idea of Deni's identity as non-binary.

"I walked into my bathroom and my mum had bought me make-up remover, cotton buds to take nail polish off with and a nail file. I said, 'Oh, what's all this?' She said, 'Well, you might find them really helpful', and that was her way of saying, 'I love you' because mum shows her love with acts of service. So that was really special."

Deni believes that the more we have honest conversations about gender diversity, the better for everyone.

"When singer Sam Smith came out as non-binary, that was a huge moment. And that really helped my mum as well. I know that by having open conversations it helps to bring more visibility and more recognition for this lived experience, which helps others."

Deni says that the best way to support your kids, or any young person in your life, as they come to terms with their identity, is to create a safe space.

"I believe the most you can do is just foster a safe environment, at least within your own home for your kids to be able to freely express themselves. Because the biggest fear of any parents of queer kids is the fear of safety and judgement when they leave their homes.

"My parents may have struggled, but they always made our home a safe space. I knew I could watch The Little Mermaid and wrap my head in a red towel so I looked like the main character of Ariel and mum would just let me do that."

Finally, Deni says, if nothing else, just listen to your kids and don't unload your fears onto them.

"If you have internal fears and phobias because everyone does, even I do, please don't burden your children with them.

"Just listen to them and then talk to your partner or a friend and you can cry with each other. But don't thrust those fears onto your kids because they're just trying to figure out who they are and that is the last thing they need to hear."