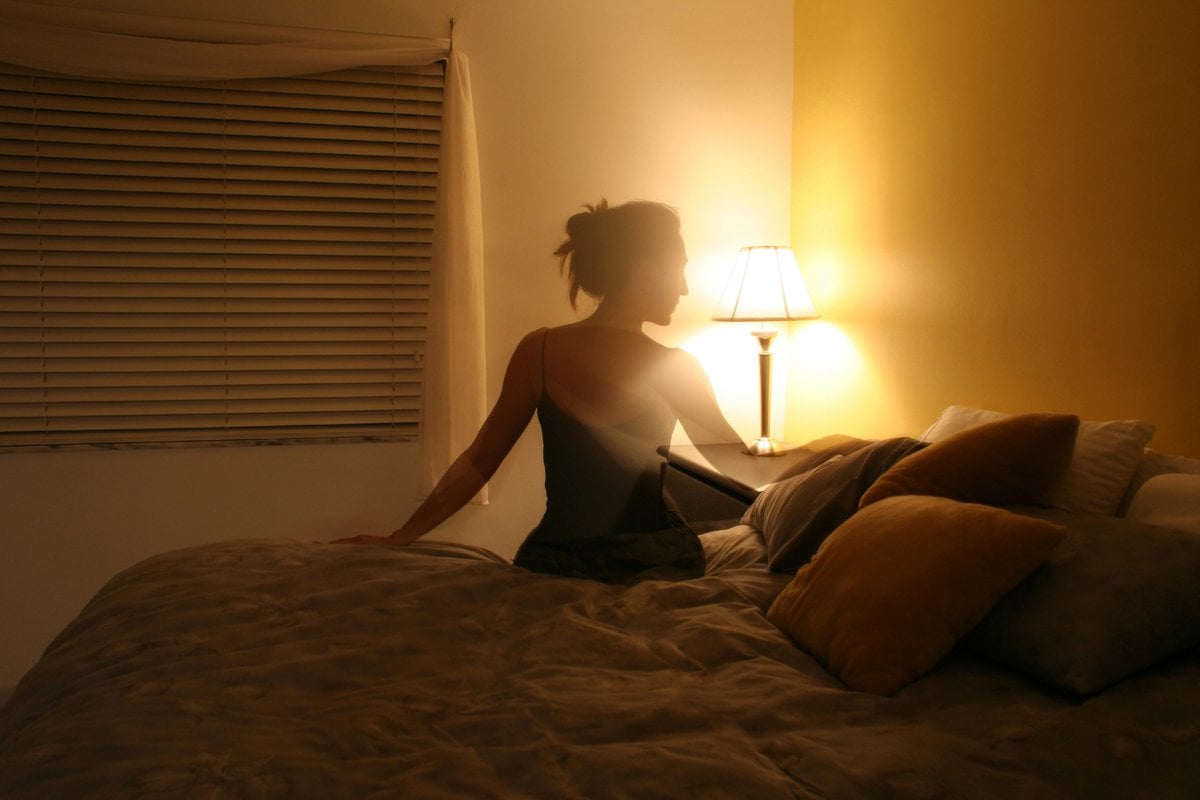 As told to Tarrin Lenard.

I am a Christmas addict.

In 2020 I put my tree up in November. Because we had a new house, two small kids and were in lockdown. Serious joy needed to be sparked. The elf had made its way to the shelf. And a bazillion other places around the house.

Watch: The Horoscopes and Self Care. Post continues below.

When the tiny faces of my two small humans burst into wide smiles, the enormous mental load and extra effort created by said elf was worth it. The tree was up. The shopping was done. Gifts for everyone.

The pressure of the pandemic almost disguised by bells that jingled, bedazzled baubles and mini-Santa figurines that sang Ho! Ho! Ho!

Tom and I had been together for 15 years.

So, three days before Christmas while Tom was in the shower rushing to get ready for a shift at work, I picked up his phone, like I always had, to make sure the notification wasn’t an urgent one. And then I saw it. The text.

Nausea. And a ringing in my ears that made the world silent and the room spin. I knew immediately. There was another woman.

Tom talked. At first, he said it was just someone from work he had helped. And then he confessed to inappropriate messages. An emotional affair. A physical affair.

Tom had been cheating. For six months. With a woman from work.

The truth finally out, I fled to my folks with our kids and my shattered heart. And then along came Christmas day.

We spent it together. Our little family, and the secret that had been exposed but had to remain invisible. We were in our new home. Miming festive tradition for the sake of the kids. It was horrible.

Even the tinsel was dripping in sadness.

Later, Tom took the kids to his parents' for Christmas dinner and left me at home. Alone. Wounded. With a few drinks in a bath that wasn’t worth having.

The reconciliation was a slow burn. It took vulnerability, and courage from both of us.

I think it was the most honest we had been with each other in a long time.

As weeks went on and with all the soul searching and talking, we had started to do, I could see that there had been a shift in him for the good.

I thought about our family and the time we had been together. I thought about what we have been through. My decision became clearer. I wanted to work on this. And we were going to do everything we could to make it.

We could use this horrible thing as a chance to make our relationship better than it had ever been.

She and he no longer work together. When it all happened, he had some time off work and put in for a transfer straight away.

While waiting for the transfer Tom made sure he only worked when she wasn’t. That was all his idea. The last time they saw each other was the night I found out.

I couldn’t understand how I still loved him. I knew I hated what he done, and not him.

That was something that I personally struggled with for so long.

I always thought, if someone ever did this to me, I would leave. I would be out of there so fast! But I stayed. For me, this is the bravest and strongest decision I have ever made.

It’s an unusual thing. For a relationship to continue after an affair. It’s difficult too. The obvious list makers are the heartbreak, the erosion of trust, the feeling like an absolute piece of chewing gum on the bottom of his shoe because obviously she was hotter than you.

Anxiety. Denial. Not enough sleep. Sleeping all the time.

Of course, those things all fall under the umbrella of grief.

Which can, so my therapist says, last for a minimum of two years. Yay. But what feels harder than all the electric shocks that occur when the emotions mix with the brain, are comments like these:

“Show him the door! You deserve better than that…❤️.”

“It makes me physically sick to see a woman staying in a relationship like that. Absolutely mental. Cannot comprehend.”

“That would be it for me. The trust would be gone, and I would never give it back, if my husband decided I was worth disrespecting like that he’d be out the door.”

“Jeez. I would have left without a second thought!”

But if the only way to run the world is to throw away a lifetime of love, connection, and family, I want no part of it.

Relationships are complicated. Keep your Ariana Grande quotes. Don’t simplify the grief, the reconciliation and our lives, in a one liner. Don’t belittle my decision to try again.

Reply
Upvote
Taking back a cheating spouse from what I have witnessed in my life, means that they have permission to do it again.
When people cheat, I now tell friends to leave me the hell out of it. If you know about it then your guilty, if you tell the spouse your guilty. I made mistake of being the honorable person and I ended up the bad guy. Never again.
R
rainyangela 3 months ago

Reply
Upvote
1 upvotes
Some people really need to learn how to be a friend and reserve judgment on their own lives only. Such comments are hurtful and in no way productive to someone’s healing. I wish you and your family the best. Not all situations are the same. You do what you see best for yourself.
News
General
Opinion
True Crime
Politics
Sport
Explainer
Entertainment
Celebrity
Reality TV
Movies
TV
Books
Rogue
Royal
Lifestyle
Beauty
Fashion
Weddings
Home
Wellness
Health
Fitness
Travel
Food
Parents
Before The Bump
Pregnancy
Baby
Kids
Teens
School
Parent Opinion
Work & Money
Money
Finance
Career
Lady Startup
Relationships
Sex
Dating
Separation
Friendship
Family
Real Life
Couples