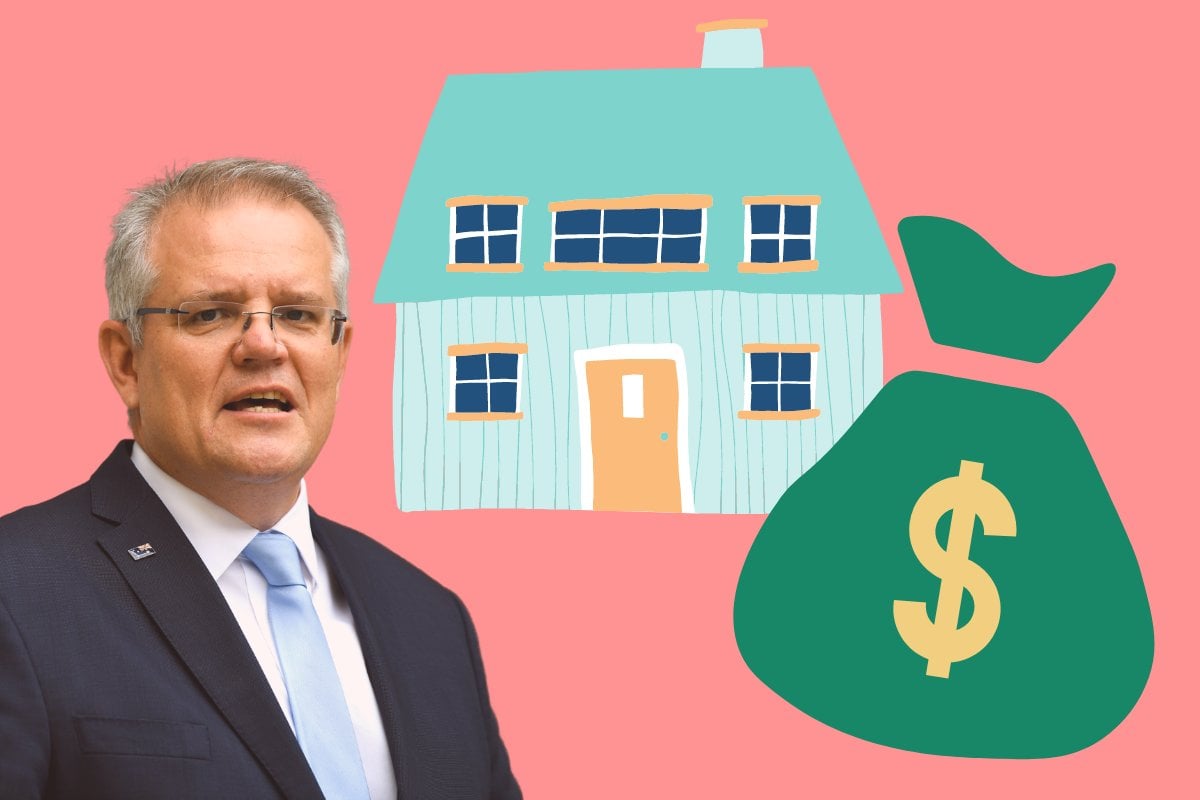 It's common knowledge that Australia is in the midst of a housing crisis.

Add on the rising cost of living, stagnant wage growth and inflation and interest rates - and it makes sense why young Aussies are feeling defeated about being able to own their own home in the near future.

So what is the answer to the crisis? The major political parties have different ideas.

Anthony Albanese has said the Labor Party's strategy is about reducing the cost of buying a home via their 'Help To Buy' Scheme. The scheme would allow the government to contribute 30 to 40 per cent of the cost of a home - equity that must be paid back when the property is sold or the buyer's income reaches a certain threshold.

On the flip side, the Liberal Party this week announced their response to the housing crisis.

What is the Super Home Buyer Scheme?

A re-elected Coalition government would allow first home buyers to take up to 40 per cent or $50,000 from their superannuation to buy a home. They must also have saved a five per cent deposit for the home prior to accessing their super.

The scheme would start by July 2023, if the Coalition is re-elected.

Allowing people to access up to $50,000 would mean they have a larger deposit, meaning they would be more likely to get their hands on a property at auction. The Coalition estimates the scheme would cut the time taken to save a deposit by approximately three years.

Housing Industry Association managing director Graham Wolfe welcomed the decision, saying it is an initiative the association has championed.

But the Financial Services Council is concerned the proposal weakens the sole purpose of super, which is to provide higher standards of living in retirement.

Mamamia's news podcast The Quicky spoke to Matt Linden - the Deputy CEO of Industry Super Australia, who also leads their strategic engagement with the federal government.

He said the impact would be wide-ranging.

"When people are withdrawing their money from their super, superannuation funds will have to have more liquidity (cash on hand) to meet these withdrawal amounts. That means funds will have to change the way they invest, and that will reduce investment returns for everyone."

Here are some of the potential ramifications:

This scheme would increase house prices.

This week, the Minister for Superannuation Jane Hume spoke on ABC radio's national program, where she confirmed that this potential scheme would actually increase housing costs temporarily.

"We know that people will probably bring forward some of their decisions to buy a house earlier and for that reason it will probably push prices temporarily," Senator Hume said. "What we know is that interest rates play a big effect, housing supply plays an enormous effect, that’s why it's important to play all ends."

Senator Hume's prediction has also been confirmed by industry experts.

"Most economists are very clear this will bid [sic] up the cost of housing of first home buyers. It will actually increase prices," Matt Linden said on The Quicky.

Matt also noted that he and his Industry Super Australia team have done the research and numbers, finding it will raise prices by quite a large amount.

"We're talking increases of 10-15 per cent across capital cities. There is a whole range of other things government should be looking at to try and improve housing affordability for young people."

It will disproportionately impact women.

In Australia, women on average retire with 40 per cent less super than men, most likely due to the gender pay gap and the fact women are often the primary caregivers to kids.

So if a woman was to take $50,000 out of her super to buy a house versus a man, the woman would statistically be left with less money in her super - meaning less financial security and stability. Add onto it the fact that women over the age of 55 are the fastest-growing group to experience homelessness and financial instability in Australia.

"In the first home buyer age cohort - ages 30 to 40 - we can already see significant differences in fund balances between men and women. The average balance for women in that age bracket is around $70,000. For men, it's around $90,000," Matt shared on The Quicky.

Matt said his concern with the scheme is that it could exacerbate the gap of home ownership between the genders - with men finding it easier to purchase a home and make use of the scheme, given their higher super balances.

Another problem being raised is whether women in financially abusive relationships could be swindled out of their money by a partner using coercive control.

There were some reports of pressure being put on women by their partners to withdraw their money from superannuation during the 2020 Early Release Scheme related to the pandemic and lockdowns. Given the similarities between the Early Release Scheme and the Super Home Buyer Scheme, no one wants further reports of financial abuse to occur.

"It's difficult to see how you could have built-in protections in a scheme like this to avoid reports [of financial abuse] occurring," Matt said.

It's the long-term consequences that have superannuation experts most concerned.

"The rule of thumb is that each dollar you pull out of super earlier in life costs you four to five dollars down the track," Matt said. "The government has said a feature of this policy is apparently when you sell your first home, you've got to return the money back into your super. But I'm not sure how that will be policed."

The additional point is that for many first home buyers, it is unlikely they will end up selling their first home - so it's unlikely to balance out.

"Having people access and drain their superannuation earnings early in their working life to try and get into the housing market - there are longer-term tradeoffs. People really shouldn't have to choose between a decent retirement and housing."

Ultimately for Matt, he told The Quicky that he doesn't see a future where accessing your superannuation has a role to play in fixing the housing affordability crisis.

"Superannuation was designed to be for retirement incomes - it's really sufficient to get a reasonable standard of living in retirement."

Whether the Coalition's Super Home Buyer Scheme comes into effect is down to what happens at the polling booth in the federal election this Saturday.

Here's what 8 women from the Mamamia community think about the plan:

S
suz m a month ago

Reply
Upvote
I checked in with one of my US based friends as I’d heard they had ‘borrowed’ on their 401k…similar to what is being promoted in this policy, the big difference it was ‘borrowed from their pension fund’ and like all loans it had to be repaid on regular repayment plan..this sounds reasonable as it keeps from people eroding their pension balance and being behind at retirement. The ‘repay it when your house is sold’ sounds hard to administer and repayment timeframe too variable ie: years or decades!. to deal with the opportunity cost of…
G
gypsy a month ago

Reply
Upvote
No it is not and I know from experience with these monetary situations with Real Estate. The sellers/developers know there is more money flowing around and they bite into it with the prices and bargaining. No one gains but the vendors. The buyers lose big time as they have lost super funds. Also, if they need to sell to upgrade to a larger premises for their growing family they have to return the super money and some, therefore in the same market they would be struggling to achieve the necessary upgrade. Their hands are tied. Not a good situation. It is policy on the run, far from well thought out.Desperate policy from a desperate man.
News
General
Opinion
True Crime
Politics
Sport
Explainer
Entertainment
Celebrity
Reality TV
Movies
TV
Books
Rogue
Royal
Lifestyle
Beauty
Fashion
Weddings
Home
Wellness
Health
Fitness
Travel
Food
Family
Before The Bump
Pregnancy
Baby
Kids
Teens
School
Parent Opinion
Work & Money
Money
Finance
Career
Lady Startup
Relationships
Sex
Dating
Separation
Friendship
Family
Real Life
Couples