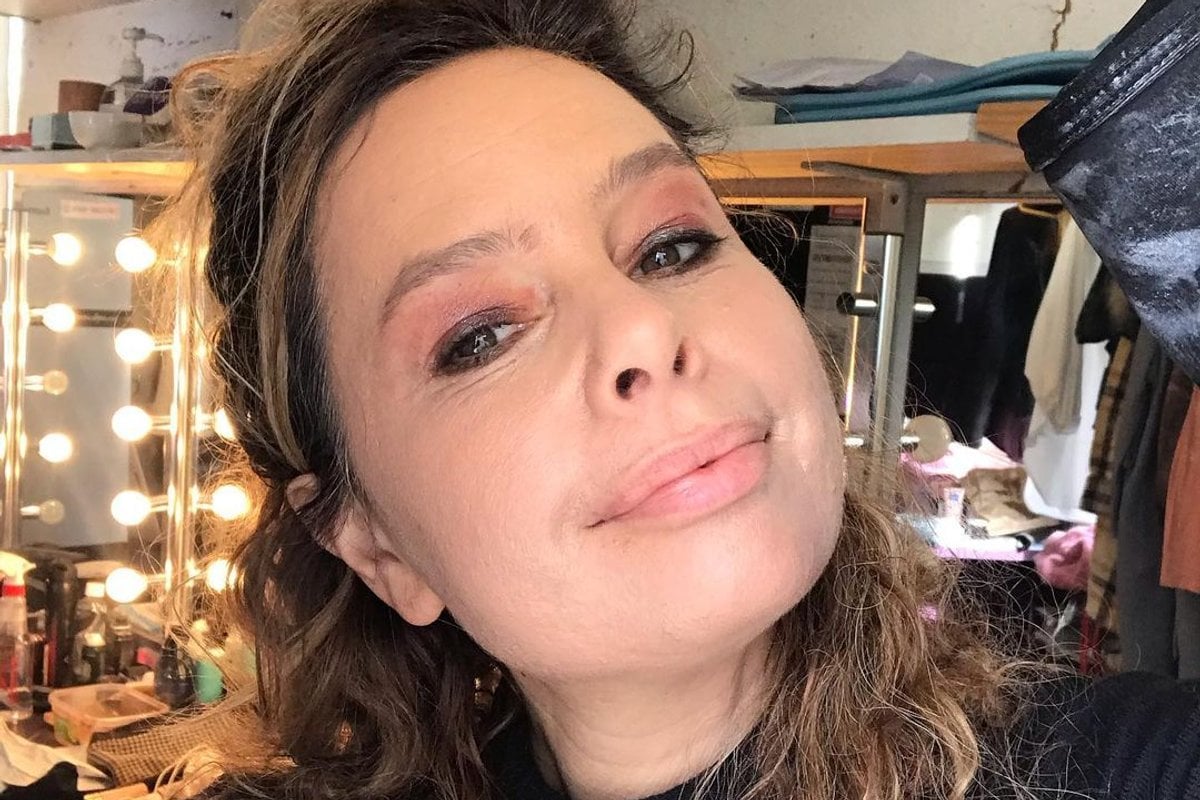 There’s an unspoken order to things.

You finish school, go to university (or acting school in my case), you spend your twenties 'making it', buy a home, settle down with a partner and have a kid – all the while basking in the success you earned during your twenties and thirties.

Forties are for school runs, mum-cars, weekends away with other couples in the Hunter Valley and refurnishing your home.

Like I said, there’s an unspoken order to things, and one of those silent rules is that you can’t 'make it' in your forties.

Making it is for plucky 21-year-olds, ready to take on the world.

Well, I’m here to tell you, unabashedly, that’s a load of rubbish. I turned 40 years old this year, and I've only just made it.

My name is Sandy Greenwood, I’m a First Nations actor, writer and playwright from the Gumbaynggirr, Dunghutti, Bundjalung tribes of Australia.

I was born in Sydney and raised on my ancestral homelands of Bundjalung Country (Byron Bay).

Growing up, it was just me, Mum, my sister and brother.

Mum was a single parent Stolen Generations Survivor – food vouchers and St Vinnies linen were the norm in our household. Making ends meet was tough.

Back then Byron was a quiet little place. Our family doctor was a kinesiologist, and we lived in a one room bush shack, deep in the rainforest, no shower, no car, making bush tracks, surrounded by koalas and my pet dingo by my side.

We were fortunate though to grow up culturally connected, Mum made sure of it, and we felt loved and nurtured by family and the magic of the bush.

But from a young age, I knew I wanted to be an actor.

I paid for my own ballet lessons from the $4 an hour job at the daggy old Brunswick Heads fish and chip shop and bought the family car at 16 to go to auditions.

As Mum has always said to me, "San, you’ve got tenacity." I ended up at one of Australia’s leading drama schools at 17 on a scholarship at the Queensland University of Technology.

My first professional acting job came when one of my most admired role models, the formidable First Nations actor, writer, director, Leah Purcell reached out to me to perform in the creative development of the play, Black Chicks Talking.

I cut my teeth and learnt my craft, touring all around Queensland, performing in old school halls and dusty basketball courts. Later, I landed a gig in the iconic Australian Gothic Theatre Production Children of the Black Skirt, which was directed by renowned stage and screen director, Leticia Caceres.

Then I moved to Sydney to perform the role of an Indigenous orphan in the play Stolen for Sydney Theatre Company’s education program directed by Wayne Blair.

In my twenties though, the time when you should be 'making it', I struggled to find my feet in the industry in Australia.

Being a light skin Indigenous actor in the mid-2000s was difficult.

Also, carrying around intergenerational trauma was a constant struggle to process and overcome.

I had casting directors say to my face that they didn’t know how to cast "a part Aboriginal girl". Hearing this type of thing made me feel like I could never make it in Australia.

Times have changed, but back then, I felt like I had to make a go of it elsewhere, and I headed to the US.

Los Angeles was hard – I wasn't a household name back in Australia. I’d never been on Neighbours or Home and Away and I didn’t have an Australian agent pushing me.

I was a no name freelance actor – but I gave it my all.

To survive, I took up other opportunities and found myself living in Silicon Valley in Northern California, working for an Environmental Foundation as a cultural consultant, presenter and EA.

My boss was a legally blind Native American (Hopi) Visionary and I would accompany him to meetings in Silicon Valley, crossing paths with all sorts of brilliant minds.

I worked as a waitress in a Jewish Restaurant in Beverly Hills for $11 an hour, picked up some freelance film producing jobs, and trained to be an acupuncturist and masseuse under a Korean Healing Master.

The lowest points were probably cleaning gigs I took on to make ends meet.

I remember looking out the window of a bathroom I was cleaning, the toilet in fact, and seeing the Hollywood sign, clear as day. It wasn’t quite the Hollywood dream I had imagined. But I kept going, I knew I couldn’t give up.

Indigenous storytelling has always been my craft, and the part of my work which brings me joy, purpose and healing.

I couldn’t shake the feeling that I needed to tell our story. The one about me, my mum, my nan, my great grandmother.

In 2018, I came back to Australia and wrote the critically acclaimed one woman show, Matriarch about the strength and resilience of four generations of Gumbaynggirr women in my family.

For my portrayal of my mother, grandmother and great grandmother, I won a Green Room Award for Best Actor in Independent Theatre and my script was nominated for Best Writing.

Twenty years since graduating from QUT I’m portraying an iconic Australian native species – you guessed it, a Dingo – the lead role of the critically acclaimed new Australian play Dogged (where Australia’s settler and First Nations histories meet) and making an impact with Sydney theatre critics:

"Greenwood delivered a harrowing performance as Dingo in search of her lost babies, her stage presence was commanding and her portrayal of grief and loss completely gut wrenching." (Theatre Travels)

The reality is, I never gave up. And there were so many moments I could have.

Mum used to say I was tenacious, but tenacity is in our blood. Here we all are – still standing, still fighting, still strong.

My mum and sister have enjoyed much success over the last two years – they are the Gumbaynggirr mother and daughter duo behind the brand Miimi and Jiinda who recently collaborated with ADAIRS on a line which sold out across the nation in hours.

I wanted to share this with you – because most of us think we’re done at 40. But there’s not one way to script life.

There’s a multitude of different ways. An infinite number of ways, in fact.

Like the dingo, we are resilient. And sometimes we’re misunderstood. But you have to be dogged in your pursuit of your dreams. Let no-one tell you they’re not for you and let no one say you’re too old to make it.

I'm stepping into my power and making my dreams come true at 40.

Sandy Greenwood is a First Nations actor, writer and playwright from the Gumbaynggirr, Dunghutti, Bundjalung tribes of Australia.

Reply
Upvote
I couldn’t love this article any more. Thank you Sandy.