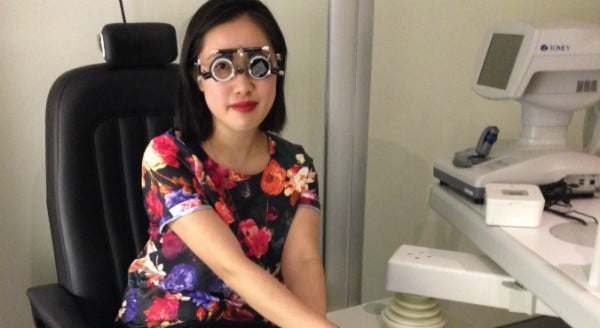 Everyone at Litchfield is more than a little creeped out by Crazy Eyes.

Do you ever worry that you’re being creepy? You know, that perhaps you’re one of those people who gives everyone  weird vibes? So do I.

According to a new study, we have a clearer definition on what it is to be classified as a legit creep. And it seems that all of my fears are confirmed (yes, I am an A-grade creepster. Help!).

It all comes down to three things:

The number one characteristic that would cause someone to be described as “creepy”? Someone who watches a someone else before interacting with them. If you’re guilty of staring absent-mindedly at the person across from you on public transport, it’s safe to say they’ve probably filed you away under “C” for “creep”.

Yes, getting in someone’s personal space or touching them is bound to weird them out. (Anyone else beginning to think they’re creep material?!) (Post continues after gallery.)

3. Steering the conversation to sex.

That person who turns every second remark into a dirty “That’s what she said” joke? You guessed it: creepy.

More than 1,300 people between the ages of 18 and 77 were surveyed about behaviours and characteristics associated with creepiness.

There’s a damn good reason certain traits and characteristics freak us out. The study’s author told Business Insider that it’s a “universal human response” humans developed in order to help them identify whether someone could be a violent or sexual threat – “anything that would make you unsure of what the person would do next.”

Sorry to break it to you, but it seems that we are all a little bit suspicious and strange when it comes down to it.

I do all of those things! It’s a wonder that anyone speaks to me at all.

Thankfully, my profession as a beauty editor was not on the list of creepy occupations. Thank goodness I don’t have to fire myself, in an effort to stop being so damned creepy!

The number one most creepy job? Not surprisingly, it's being a clown. Following that were taxidermists, sex shop owners and funeral directors. The researchers explained that death and sex were “threatening stimuli”, and therefore more likely to be deemed as “creepy”.

It’s saddening to learn that the people who were surveyed considered two natural, human occurrences – sex and death – to be “creepy”.

Well, if we are all creepy, then perhaps that means we are all just… normal. In this weird and wonderful world, perhaps it’s nice to have a bit of unexpected behaviour every now and then.

So next time a clown makes a sex joke just go with it, because they probably think you're creepy for staring at them.

What do you think? Do you think the study is correct in calling those behaviours and occupations "creepy"?