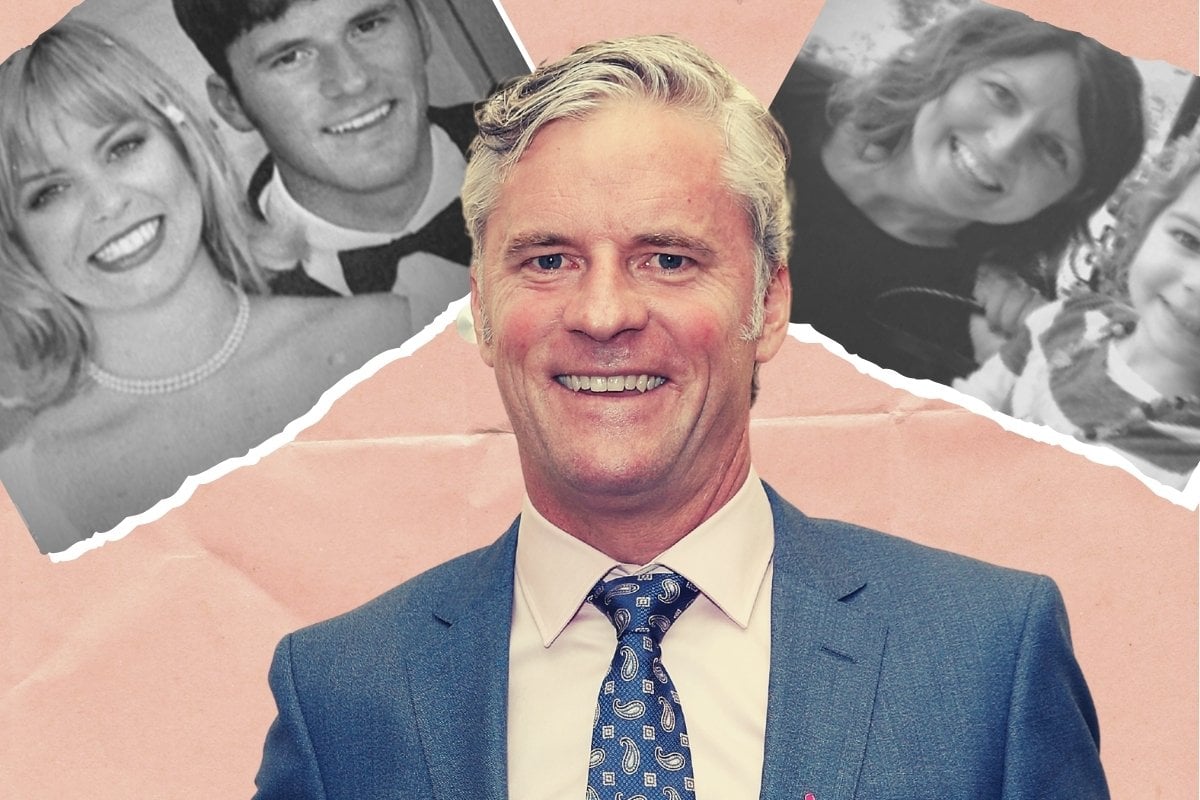 Stuart Diver has endured more heartache in the past 25 years than most will face in their lifetime.

He survived a natural disaster that claimed the life of his wife, Sally, and lost his second — Rosanna — to breast cancer almost two decades later.

Yet rather than wallow in the depths of it all, the 51-year-old has become somewhat of a national symbol for resilience, for finding a means of existing — even thriving — in the face of deep trauma.

Speaking to Mamamia's No Filter podcast, he explained that he does it by asking himself a key question: "What am I living for?"

The answer is simple.

"I love people. I love sharing life with people, I love caring for people. And that's what drives me forward," he said. "That's what gets me out of bed every day."

Luckily, his life has been — and continues to be — filled with an abundance of it.

With the passage of time, Stuart Diver's memories of his wife, Sally, have faded a little. But he remembers the important things.

"She was well liked by everyone, because she was always bright and bubbly, and she was happy. She had that carefree attitude, and she had this really deep determination — she knew where she was going, and she knew what she was doing," he said.

"And that's what I've thrived on when she was alive."

For a time, Sally's death in the Thredbo landslide was tangled up in all the major elements of that disaster; his own near death, his triumphant rescue and the national profile that came with it. He's managed to separate it all over the years with the help of a psychologist, to find meaning in something so senseless.

"I tried to stop her drowning, but she drowned. And that was hugely horrific," he said.

"But when I look back at that, in the most stressful time of my life, what I did was I tried to take care of the person that I loved and cared for the most in the world."

In that realisation was that answer to that question that gets him through: 'What I am living for?'

"People could say her life was wasted. But I look at it and say, yes, her life was definitely cut short, but there is a real duty on me to then live my life to the fullest in the most positive way in memory of her and what a beautiful person she was, and all of those amazing beliefs and traits that she had," he said. "And that's what drives me forward."

Diver found many of the same traits in his second wife, Rosanna Cossettini, a "strong, independent" woman with whom he had a daughter, Alessia.

The couple met in 1999 and married three years later, but shortly after they returned from their honeymoon, Rosanna was diagnosed with breast cancer.

When it became clear it was no longer treatable, Diver was faced with a vastly different kind of loss than he'd experienced before. There was time to contemplate what was coming, to plan for it, to say goodbye. There was also a four-year-old girl to guide through it and care for in the aftermath.

Six years on, he does what he can to remind them both of the love they shared. Together, he and Alessia cook from Rosanna's recipe book, and they remember what it was like to lay on the couch and hug her.

"It doesn't always go perfectly all the time. There are massive lows, there are all of those things. It's a roller coaster for her as well," he said. "But at least the over-riding sentiment for Al is that the memories of her mum are positive. And that's how we're trying to live our lives."

Yes, Diver still allows himself room to feel angry, to feel sad at the unfairness of it all. But the key, he said, is to not stay there for too long.

"It can sound a bit facetious, but it's not, you know," he said. "You can get positives out of these huge tragedies and that's the only way I see to go forward."

Listen: For more of Stuart's story, including the beautiful gift Rosanna left for their daughter, listen below or via your favourite podcast app. (Post continues below.)

Today, Stuart Diver is not only living for the love of Sally, Rosanna and Alessia, but his new partner — a mother, with whom he's enjoying a beautiful, private existence.

Though they live "semi-separate lives" in different parts of the country, he describes their relationship as an incredibly happy one.

"I am the most fortunate guy in the world in that I've met another unbelievably amazing woman," he said. "You would think, 'How much more can someone teach me about my life?' But she's teaching me so much that I had no idea about — in relation to Alessia, in relation to who I am as an individual.

"We're happy. We're happy doing what we're doing. And we just want to move on and live our lives post-lockdown in some sort of normal way."