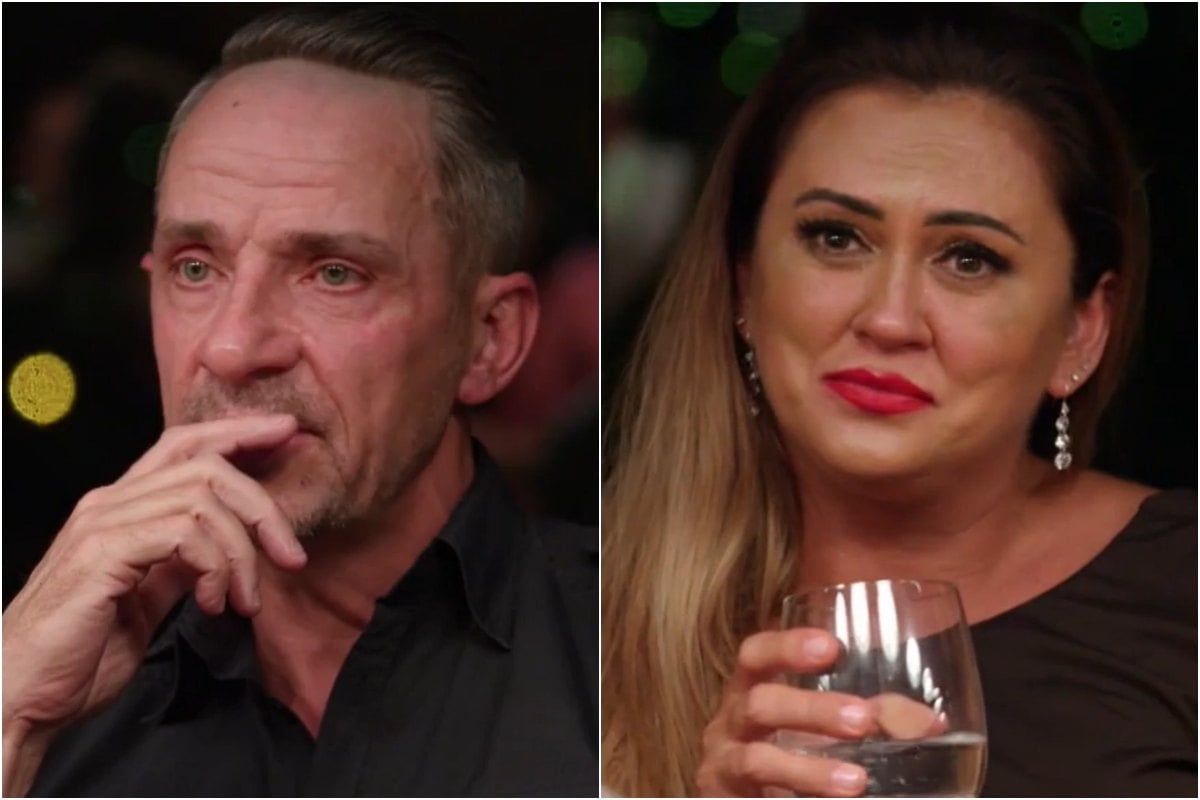 Everybody stand down because tonight’s episode was Mishel’s time to shine.

You see, the QLD mum-of-two is a woman on the verge. Last night she was told by her fake husband of six weeks, Steve, that he isn’t attracted to her. Now, she has nothing to lose.

“He thinks he’s a glass of Moët and really he’s just warm piss in a plastic glass,” she said, describing her husband in a piece-to-camera.

Sure, there are other dysfunctional couples to talk about but none of them are quite so eloquent when describing their other half.

Relive the moment Steve puts his foot in it and tells Mishel he’s not attracted to her. Post continues below.

Things don’t improve at the dinner party. While the old couples were getting acquainted with the new couples – Seb and Lizzie and KC and Drew – Lizzie caught up on the existing drama. After all, this wasn’t her first rodeo.

Eventually, Mishel pushes her (fake) husband just a little bit too far and the episode ends with Steve walking out of the show, with Josh running after him. It’s wrong, but all we can think about is this iconic BBC Walk on the Wild Side scene.

Either way, Steve is done.

Here were the best reactions to tonight's episode.

Steve: CAN I JUST SAY MY PIECE I'M JUST SAYING I'M NOT ATTRACTED TO YOU WHY ARE YOU YELLING #MAFSAU #MAFS

#MAFS that's the drama I want to see

Imagine how the driver felt driving with Mishel and Steve in the backseat... #MAFS pic.twitter.com/s3XzXjHjAQ

Does someone get the stir the pot card each week and this week Josh got it? #MAFS #MAFSAU pic.twitter.com/pHEwxJx7p3

Lizzie, knowing the drama doesn’t revolve around her for once: #MAFS #MAFSAU pic.twitter.com/5pngXWHDDa

Oh Dr John, you sweet summer child. The time for growth for most of these couples had LONG passed... #MAFS pic.twitter.com/mQcRSvIld0

These poor contestants are always so damn sweaty in that dinner party warehouse, no wonder they all start fighting each other by the end of the night #MAFSAU #MAFS