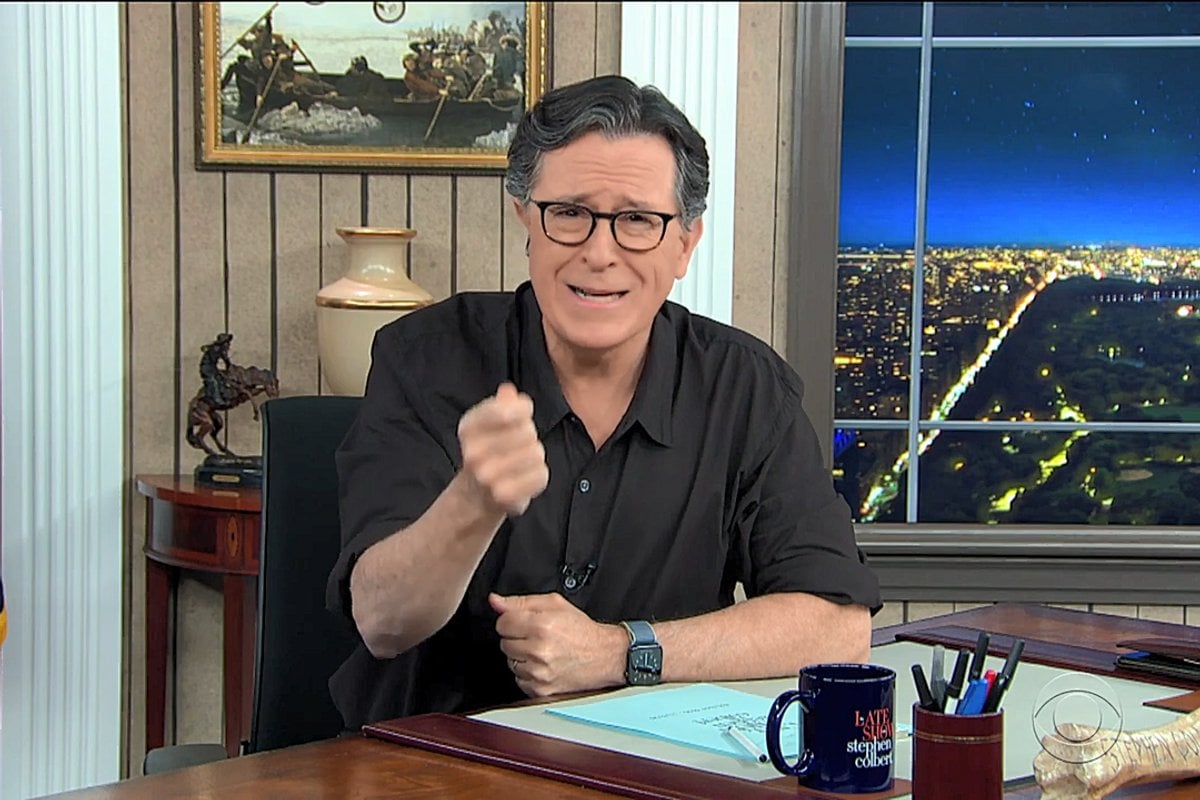 There were fewer jokes and wry smirks on last night's episode of The Late Show.

Host Stephen Colbert fronted the cameras in a sombre mood, dressed all in black — "for a funeral". Because, he said, President Donald Trump had tried to "poison American democracy".

In an emotional opening monologue (which has since been viewed more than 4.6 million times on YouTube), the veteran American television presenter expressed his dismay at Trump, who just hours earlier had given a rambling press conference in which he made entirely unproven allegations of voter fraud in the unfolding election.

Watch a clip from Donald Trump's press conference below. Post continues after video.

With mail-in votes still being counted in crucial states and his opponent Joe Biden creeping ahead, President Trump accused the Democrats of trying to "rig" and "steal" the election and warned that "a lot of litigation" is planned to stop them.

Several major networks in the United States cut their broadcast of the press conference early, and even a commentator on conservative network Fox reminded viewers that there is no evidence whatsoever to support President Trump's claims.

Donald Trump claims, without evidence, that current election projections are based on fraudulent votes

As Colbert noted, the president has expressed several times over the years that he has a problem with losing. As he said ahead of the results in 2016, "I will totally accept the results of this great and historic presidential election — if I win."

"So we all knew he would do this," Colbert said last night, before pausing.

His voice catching and eyes welling with tears, he continued.

"What I didn’t know is that it would hurt so much. I didn’t expect this to break my heart. For him to cast a dark shadow on our most sacred right, from the briefing room in the White House — our house; not his — that is devastating."

Paraphrasing the famous words of Irish statesman Edmund Burke, Colbert issued a call to action to Trump's colleagues in the Republican Party.

"For evil to succeed, all that is necessary is for good men to do nothing," he said.

"So say something right now, Republicans. Not later, not after you’ve stuck your finger up in the wind or wherever you want to put it. Right now. It's in your best interest.

"You only survived this up 'til now because a lot of voters didn't want to believe everything that was obvious to so many of us, that Donald Trump is a fascist. And when it comes to democracy versus fascism, I’m sorry, there are not fine people on both sides. So you need to choose: Donald Trump or the American people."

Watch the full monologue below. Post continues after video.

Some have already chosen.

The Republican National Committee is aiming to raise at least $US60 million ($A83 million) to help finance Trump's legal battles, sources told Reuters.

And Senate Judiciary Committee Chairman Lindsey Graham told Fox News that he was prepared to donate $US500,000 ($A687,966).

So far, only a handful of Republicans have spoken out against the president's apparent attempts to cling to power.

Among them Pennsylvania Senator Pat Toomey, who said in a statement that once the state's final election count is "reached and certified, all parties involved must accept the outcome of the election regardless of whether they won or lost."

Speaking to the US Today Show, he added, "I saw the president's speech last night, and it was hard to watch. The president's charges of large-scale fraud, there's no evidence here."

Will Hurd, a retiring Republican Congressman from Texas, tweeted his rebuke.

"A sitting president undermining our political process and questioning the legality of the voices of countless Americans without evidence is not only dangerous and wrong, it undermines the very foundation this nation was built upon. Every American should have his or her vote counted."

Here are a few more.

We want every vote counted, yes every legal vote (of course). But, if you have legit concerns about fraud present EVIDENCE and take it to court. STOP Spreading debunked misinformation... This is getting insane.

There is no defense for the President’s comments tonight undermining our Democratic process. America is counting the votes, and we must respect the results as we always have before. No election or person is more important than our Democracy. https://t.co/BOO2iaTsEf