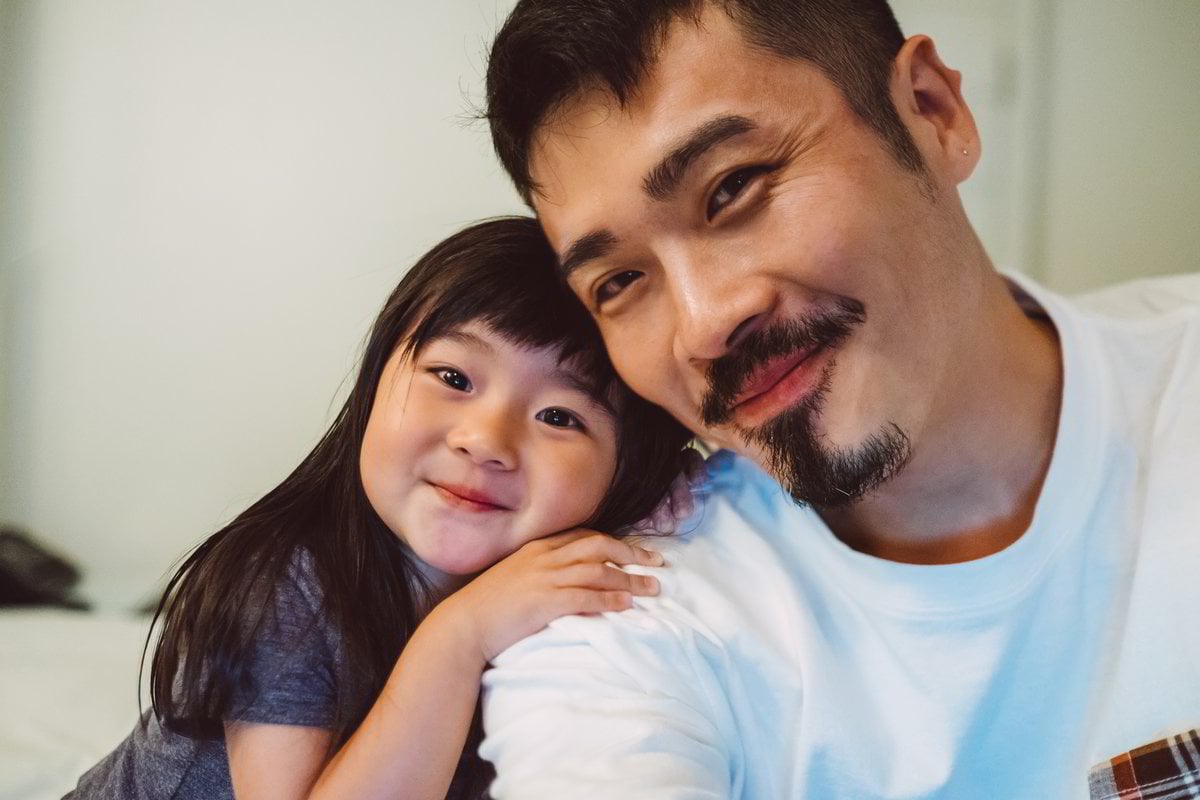 Steve has been married for 13 years. He has three primary school-aged children aged ten to five.

Up until recently, Steve’s business saw him out of the house at least ten hours a day. Running a business in events during peak periods, he would often work through weekends and it was normal to work 18 hour days. He missed most of the "day-to-day heavy lifting and logistics involved in running a house and family," Steve tells Mamamia.

This meant "the bulk of the logistics fell to [my wife]," Steve says of his partner, who until recently, worked part-time hours and has always been the primary caregiver in the relationship.

Watch: If My Dad Was A Home Smart Speaker. Post continues below.

Everything changed in their household on Friday March 13, when Scott Morrison declared “'non-essential' mass gatherings banned”. Working in large scale live events, Steve’s work dried up overnight with no certainty around when it would pick up again.

"Around the same time, my wife’s role became full time," he says. In that moment, what he describes as "the flip" began, and for the first time he was responsible for the running of the home, children and the mental load. He describes it as "both gratifying and infuriating."

My personal needs, they came last

"It dawned on me rather quickly that I had to position myself last in the family, and that was necessary for it to work," Steve recalls. Still, he says he was "surprised at how quickly that came on".

Around the same time that New South Wales schools closed, Steve’s wife started working 12 hour days and across weekends. As her work demands increased "her ability to be present in the house basically stopped and I know what that is like," Steve says. "In the past there have been many times I’ve been home, but not really present and I accepted that had to happen."

"I never fully comprehended the sacrifices she had made to enable me to run my business the way I did," he says. "Even the fact that I could walk out the door whenever I needed to. She had allowed me to be, in some ways, selfish. I hadn’t realised what that took until now."

Steve explains "it has totally flipped around, not consciously, but because she needs that to be able to work the way that she is now".

"There was a real pleasure in being around my kids more, that was such a gift at this time, to give them care and be engaged in their lives in a way I have never had the opportunity to do before. That has been amazing," he says.

During the initial lockdown period "we spent more time in our backyard than ever before," Steve recalls. "We spent hours jumping on the trampoline, playing games and camping."

He also taught his youngest to ride a bike and "went for bush walks and spent a lot of time together having adventures".

"In trying to keep some sense of normalcy and shield them from the weirdness of lockdown, we managed to have a lot of fun," he says.

"They started to see me differently, they would come to me instead of my wife if they needed something or if they hurt themselves.

"I now see that it’s not gendered in the way kids do that, it's about the amount of time you spend with them and how they perceive you."

I found a new satisfaction in getting through domestic chores

"Sitting in a house I had cleaned, where everything had been put away was satisfying in a way that surprised me."

Getting through lists of things he had long been ignoring around the house "gave me a real sense of being able to do something purposeful and it kept me occupied in a way that I could rationalise myself as doing good for the household."

It is a thankless job

"Being a social secretary and looking after three kids’ schedules is a full-time job," Steve says.

Balancing sports, schooling, social schedules and managing the mental load of parenting three kids and their needs was a bigger job than he had anticipated.

He recalls that remote learning with three children has been his biggest challenge. "I was happy when they went back to school, that moment a real weight lifted off me," he recalls.

"I didn’t realise how full on, and just how heavy that load was while we were in it."

He also now gets that it all goes "completely without thanks. The kids don’t understand how much you do for them."

"While I really like my work, I actually like my family more," he says. "I don’t want to run my business the same way I did working so many hours. When things return to the new normal, I want to make more time for family."

Steve reflects on how this might change the balance of responsibility moving forward.

"I don't want the burden falling so disproportionately to my wife. I don't want to get through this and have it return to the way it was," he says. "I’m just glad that I can be there for her now, to repay in some small measure, the sacrifices she has made for me and our kids."

"I didn’t even realise the extent of the sacrifices she has made until now, so it will be about managing the recalibration as to how I keep the good bits that have come from this."

Steve is looking forward to their new normal.

"My family has always been my priority," he says, "but I’ve never treated it as a priority, and I want to give time back to them."