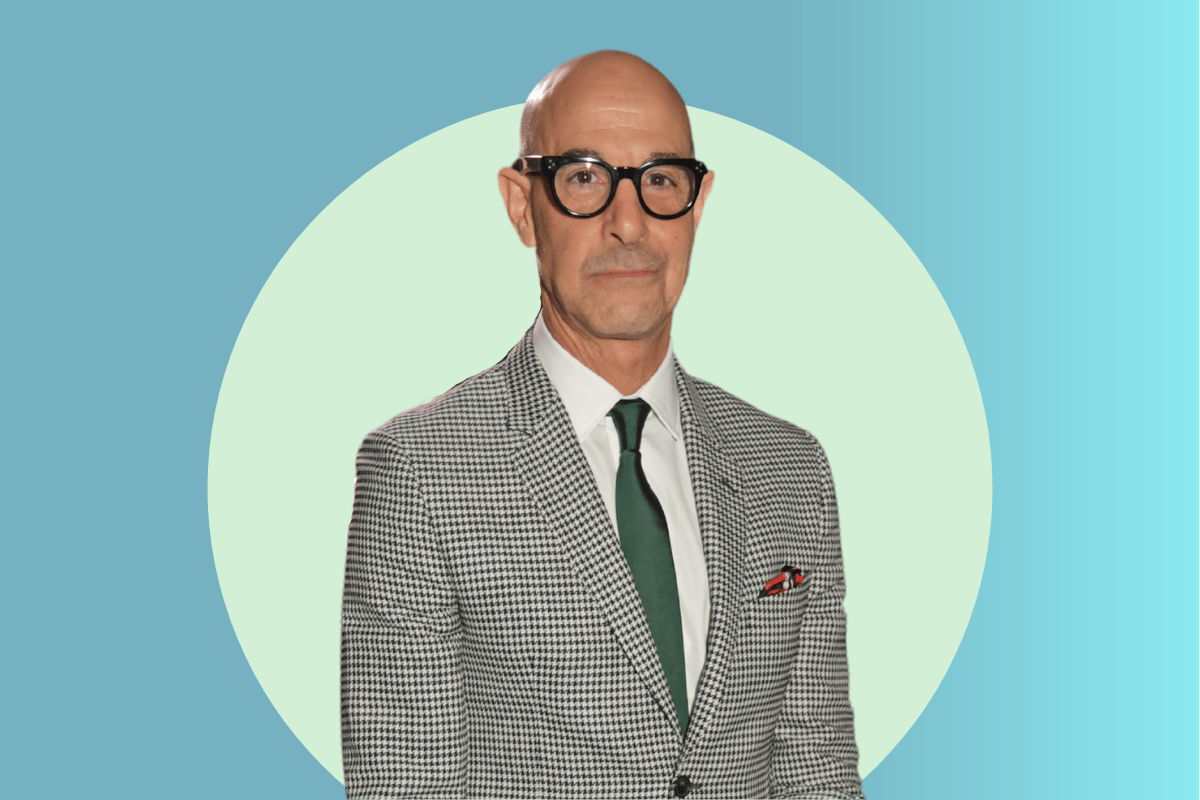 Stanley Tucci is having a moment.

One of the most prolific (and talented) supporting actors in Hollywood is getting the ‘leading man’ treatment. Men and women drooling over him. Thirsty memes. Gushing social media posts dedicated entirely to his forearms. Articles like… well, this one.

In April last year, the 60-year-old become an ‘isolation crush’, courtesy of a curiously sexy Instagram video in which he shared how to mix a Negroni (two shots of gin, two of sweet vermouth and one of Campari, shaken over ice, in case you’re playing along at home).

Watch Stanley Tucci making a negroni. Trust us, you really need to see this. Post continues.

He followed it up with a martini tutorial that had actor Ryan Reynolds fawning over him in the comments.

It feels like, finally, Stanley Tucci is getting the level of attention he deserves.

For longtime fans though, it’s been a 35-year love affair spanning a diverse career that earned him awards, box-office success and brought him to his second great love after the loss of his first.

Stanley Tucci’s childhood memories from the ’60s and ’70s seem to centre around two things: art and food. His father was an art teacher, his mother a school secretary; part of a close Italian-American family in rural Westchester, New York.

Speaking to The Guardian in 2017, he shared snapshots of playing in the woods until his mother called him in for dinner. Of learning jewellery-making, pottery and silk spinning from his dad. Of waking up to the smell of ragu bubbling on the stove. Of his grandmother’s pasta and his grandfather’s wine-making. Of living in Florence for a year at the age of 12, and visiting museums. Of elegant dinner parties thrown by his parents.

But most formatively… “We ate dinner together every night, which is the greatest thing you could do for your kids. It gives real consistency and structure to family life. It is vital that you have a meal together; nothing is more bonding or more healing.”

Though creativity was an integral part of his upbringing, he didn't have ambitions of being an actor. He was introduced to the craft professionally in 1982 when the actor's mother of a school friend secured them parts as soldiers in a Broadway play she was co-starring in.

His first film role came three years later, with black comedy Prizzi's Honour. And then, well, they kept coming. Among the titles on his CV are The Pelican Brief, Road to Perdition, Big Night, The Devil Wears Prada, Easy A, Julie and Julia, plus The Hunger Games and Transformers franchises.

But it was his role as serial killer George Harvey in The Lovely Bones that earned him an Oscar nomination in 2009.

Meeting and losing his wife, Kate.

They were married for 12 years, barring a short separation prompted by Tucci's 2002 affair with The Sopranos actor Edie Falco, who he co-starred with in the Broadway play, Frankie and Johnny in the Clair de Lune.

"We were together and then we broke up," Falco told The New York Times in 2004. "Because there's no way for that to be a good thing. He's a lovely man, and he's back with his wife and kids, and I'm thrilled."

The couple reconciled, but in 2006, Kate was diagnosed with stage four breast cancer. She passed away in April 2009.

"We tried everything we could do to save her," Tucci told The Guardian. "I wish that I could have done more and that I could have been with her at the moment she passed away. I couldn’t be in that room, because I knew it would be so devastating that I wouldn’t be able to take care of the kids after."

This week, Tucci opened up about his own experience with cancer for the first time.

Speaking to Vera, the 60-year-old explained that he was diagnosed with a tumour at the base of his tongue three years ago.

"It was too big to operate, so they had to do high-dose radiation and chemo. I'd vowed I'd never do anything like that, because my first wife died of cancer, and to watch her go through those treatments for years was horrible," he told the publication.

"The kids were great, but it was hard for them," he added.

"I had a feeding tube for six months. I could barely make it to the twins' high school graduation."

Tucci went on to say that the cancer is unlikely to return.

"[Cancer] makes you more afraid and less afraid at the same time. I feel much older than I did before I was sick. But you still want to get ahead and get things done."

A year after the loss of Kate, Tucci attended the wedding of his friend and Devil Wears Prada co-star, Emily Blunt, in Lake Como, Italy. That evening the bride introduced him to her sister, Felicity, a London-based literary agent.

"It is not easy to find somebody who is going to take on three teenagers and a widower. That’s a lot," he told The Guardian. "But she was willing to take on that challenge. She cares for the kids as if they are her own, and it is a tough role, being a step-parent."

The couple has two children together: Matteo, 6, and Emilia, 3.

He has described his parenting style as "much calmer" with his youngest children, although concedes it's a little tougher to bend down to pick them up these days.

Just like his own childhood, he's made family dinners a staple of theirs. Along with good humour.

"I joke around with the kids a lot. They’ll come back from a party and I’ll ask, ‘How many drugs did you do?’" he quipped to The Telegraph in 2017. “And they’re like, ‘Dad, stop it, you know we don’t!’ But you have to make those jokes. The alternative is not talking about it."

Somewhere in the middle of it all, Tucci co-owned a restaurant in New York, penned The Tucci Cookbook, and worked on advocacy projects for the United Nations Refugee Agency, UNHCR.

Despite his success, Tucci told The Telegraph that he never feels like he's 'made it'.

"Never have, never will," he said. Why? "Because I have a mortgage, and it’s a very fickle business. And there’s always something more you want to do."