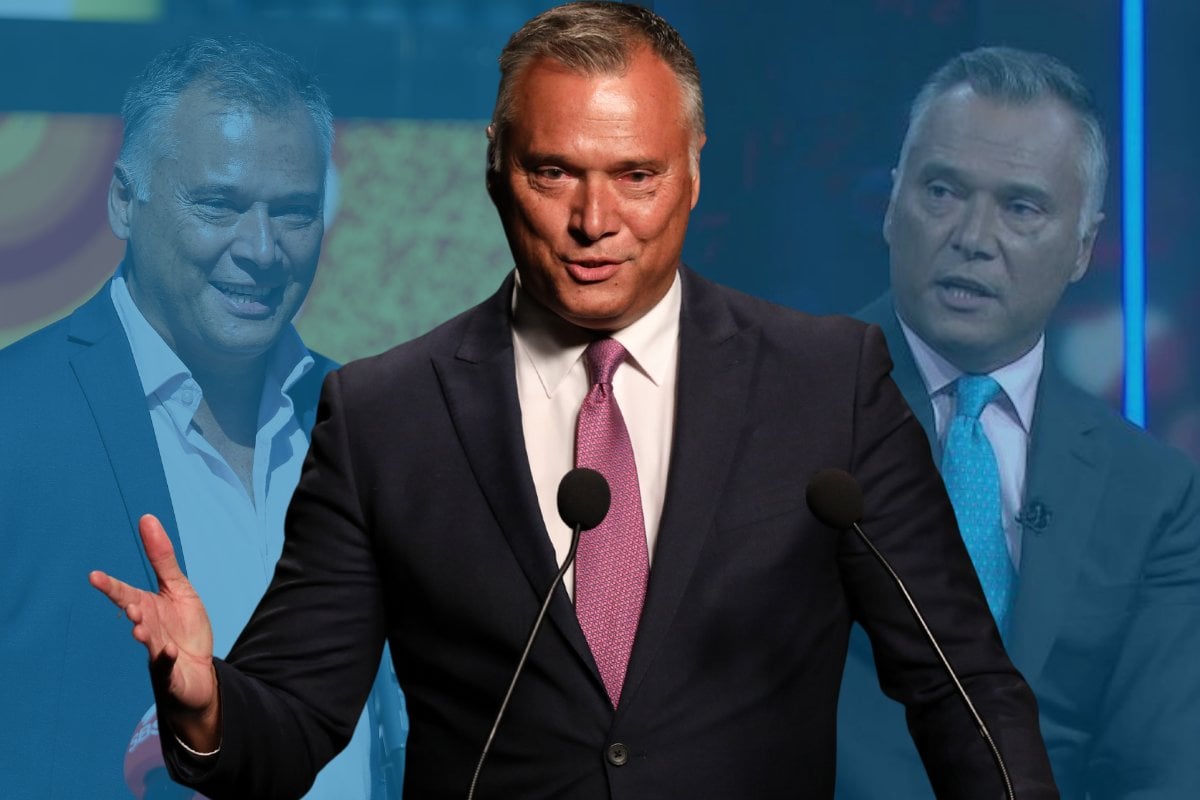 Whenever Stan Grant drives to his parent's home in Griffith NSW, he crosses over a creek called Poisoned Waterholes Creek. It's a place where years ago, Wiradjuri people were targeted by a coloniser who would poison the water with the intent to kill the Indigenous locals who relied on that creek.

It's a history that lives with Grant. A trauma of Indigenous persecution he has inherited.

The award-winning journalist and television presenter was born in 1963 and grew up in Griffith. Growing up, money was tight in his family. Grant's mother is from the Kamilaroi people and his father is of the Wiradjuri.

"My great-grandmother lived here and out the back was a broken-down Model T Ford. My parents called it 'the honeymoon suite' because when they first got together that's where they lived – in a broken-down car," Grant said on Julia Zemiro's Home Delivery.

Throughout his childhood, Grant went to a staggering 13 different primary schools and was often on the move, saying his family's dire financial situation gave him "terrible stomach pain".

Exclusion and difference became a normality. At school, racism and ignorance was common practice – so was regular "interrogation" from welfare government officers.

"I can still hear the roll call of our names. One by one the Black kids were pulled out of class. We’d be searched for head lice, our teeth examined, our fingernails examined for signs of dirt. We were questioned about what we'd had for dinner the previous night. We would have to open our bags to show what we had for lunch," he said.

"These people likely thought themselves well-meaning. But they scared me."

Just like the vast majority of Aboriginal families across Australia, Grant's family was affected by the Stolen Generation. And even though this period in history is officially marked between the 1910s to 1970s, it has continued to tear apart families more recently.

"I remember after school, peering around my street corner looking for the tell-tale white cars of the welfare men, as we called them," Grant wrote. "Any signs of them and I'd hide out for hours. I would wait until dark and then creep back home. I'm talking when I'm six or seven years old, asking me questions about my mum and dad. 'Did my dad drink?' The welfare men traumatised us. It was extremely traumatic."

Grant hadn't always grown up with the desire to become a journalist. But he had loved watching news broadcasts, listening to the radio and reading the newspapers from a young age.

So after moving to Canberra in his teens with his family, Grant met Aboriginal scholar Marcia Langton – and it was Langton who encouraged Grant to follow his passion and potential.

Five years later, he was a press gallery journalist in parliament.

Grant's career trajectory only went up from there. He has worked for countless radio and television networks and mastheads in a career that has spanned more than 30 years – even covering international news across 70 countries.

"There was a deep, deep depression and despair," he said to Julia Zemiro about covering devastating news events overseas. "Despair at the world I was reporting on but also a despair and a depression that came from where I'd grown up and what I'd seen and experienced. Coming back from overseas, I slowly come to an awareness or appreciate that my voice does matter in Indigenous affairs."

And his voice was needed.

Because there was limited Indigenous representation in journalism at the time.

"There was no one who looked like me. We were not presenting the news or current affairs, we weren't foreign correspondents, we weren't political correspondents," he said recently. "The highest form of praise when I came into journalism was to be called a white man. If you did something well, they would say, 'Good on you. You're a white man'." 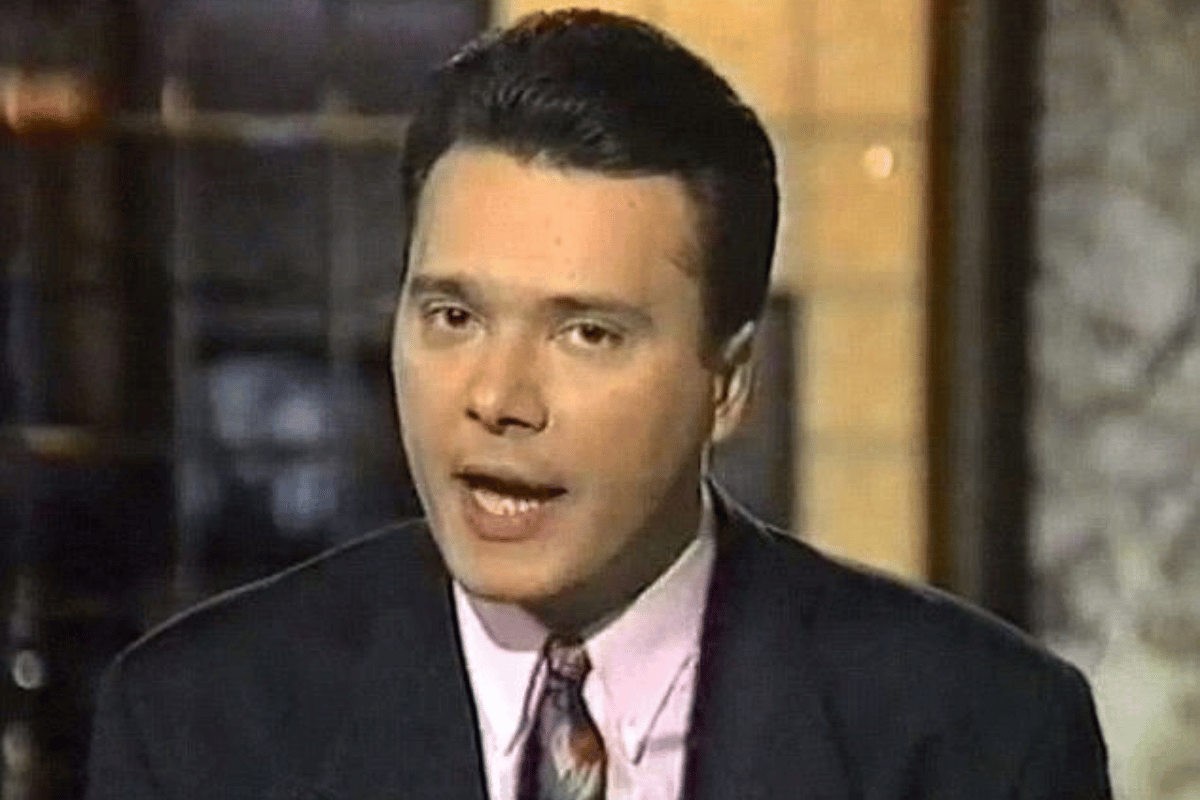 In 2000, the attention surrounding Grant temporarily moved from his career to his personal life.

At the time, he had been married to fellow Indigenous journalist and television presenter Karla Grant, who is the host of Australia's longest-running Indigenous current affairs program Living Black.

After 16 years of marriage, Grant met fellow journalist Tracey Holmes – the pair were colleagues at Channel Seven. They fell in love, Grant and Karla divorced, and Grant went on to marry Holmes.

In a later interview with Sydney Morning Herald, Holmes said: "Stan and I got into some really interesting conversations about the world and people and politics, and I guess I fell in love with his mind. But he was married to Karla at the time.

"We stayed in touch, then in a few months, it became obvious that we were attracted to each other. I didn't want to interfere in his personal life; I let him deal with that, it wasn't my place."

'Tracey's got a secret': Stan Grant and Tracey Holmes open up on their relationship and a surprise twist from the past https://t.co/UZ8Ca4KeWF

The new couple ended up resigning from their jobs at Channel Seven, because the execs reportedly didn't want Grant and Holmes to live together, or for it to become public knowledge.

Reflecting on that, Holmes said: "It still intrigues me how they thought our living situation was their business."

As for Grant, he said about the decision to divorce and start a relationship with Holmes: "There were hard decisions to make about that because I was married. That was difficult. But like a lot of things in life, you make decisions and they are difficult decisions, and sometimes they can be really painful for a lot of people."

A few months into the relationship, Holmes fell pregnant, and by 2001 they were married, and continue to be together today.

Karla and Grant share three children together – Lowanna, John and Dylan. Grant then went on to have a son with Holmes, named Jesse. 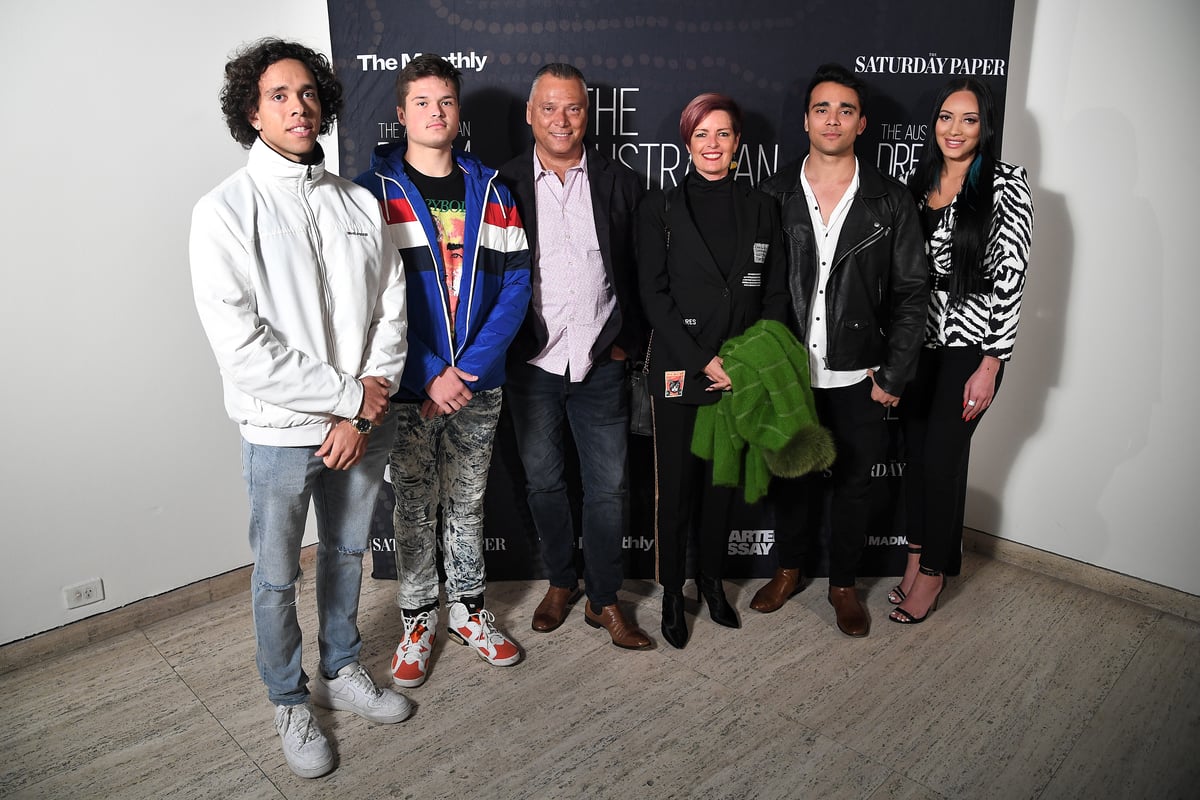 When Grant returned to Australia in the early 2010s after his journalism career abroad, he knew that championing Indigenous issues was something he wanted to focus on.

In 2016, a speech of Grant's went viral. A speech where he spoke of the impacts of colonisation and discrimination on Aboriginal people and their ancestors.

"The Australian dream," Grant said. "We sing of it and we recite it in verse; 'Australians all let us rejoice for we are young and free'. My people die young in this country. We die ten years younger than the average Australian, and we are far from free. We are fewer than 3 per cent of the Australian population and yet we are 25 per cent – one quarter – of those Australians locked up in our prisons. And if you're a juvenile it is worse, it is 50 per cent. An Indigenous child is more likely to be locked up in prison than they are to finish high school."

It was a sobering speech that connected with many.

Listen to No Filter: Everyone's talking about Tony Armstrong. Post continues after audio.

But it was a crucial conversation to have. In a keynote address this year, Grant said that the racism he has experienced throughout his life, but particularly early on in his career, once drove him to suicidal ideation.

"There were times when I would feel the urge to take my own life, coming in me like an irrepressible surging wave. 'Do it now. Jump now'. So powerful, that it would block out everything," he said.

"I remember once standing on the balcony in my hotel room when I was out doing a story... and walking up onto the balcony and standing there, with nothing to hold me, not caring whether I fell. The years of reporting these stories, of dragging my history around with me, took an enormous toll."

Grant credited his wife Holmes for helping him through the dark period, along with the support from mental health services.

"Luckily my wife intervened. I got the treatment that I needed. I found the right people, got onto the right medication, I took the time out to deal with that. I remember one day standing in that beautiful, golden winter light… knowing there was a healing in the country and in the place that I needed."

And for Grant, although his hometown of Griffith carries with it a sometimes-painful history – the Poisoned Waterholes Creek for one – he feels a sense of healing from being on Wiradjuri country.

"Our inheritance is often an inheritance of sadness and grievance. One of the things I've really grappled with is how do I overcome that?" he said. "My struggle has been to move beyond that. I've seen too much of the world to know that clinging to historical grievance leads to violence." 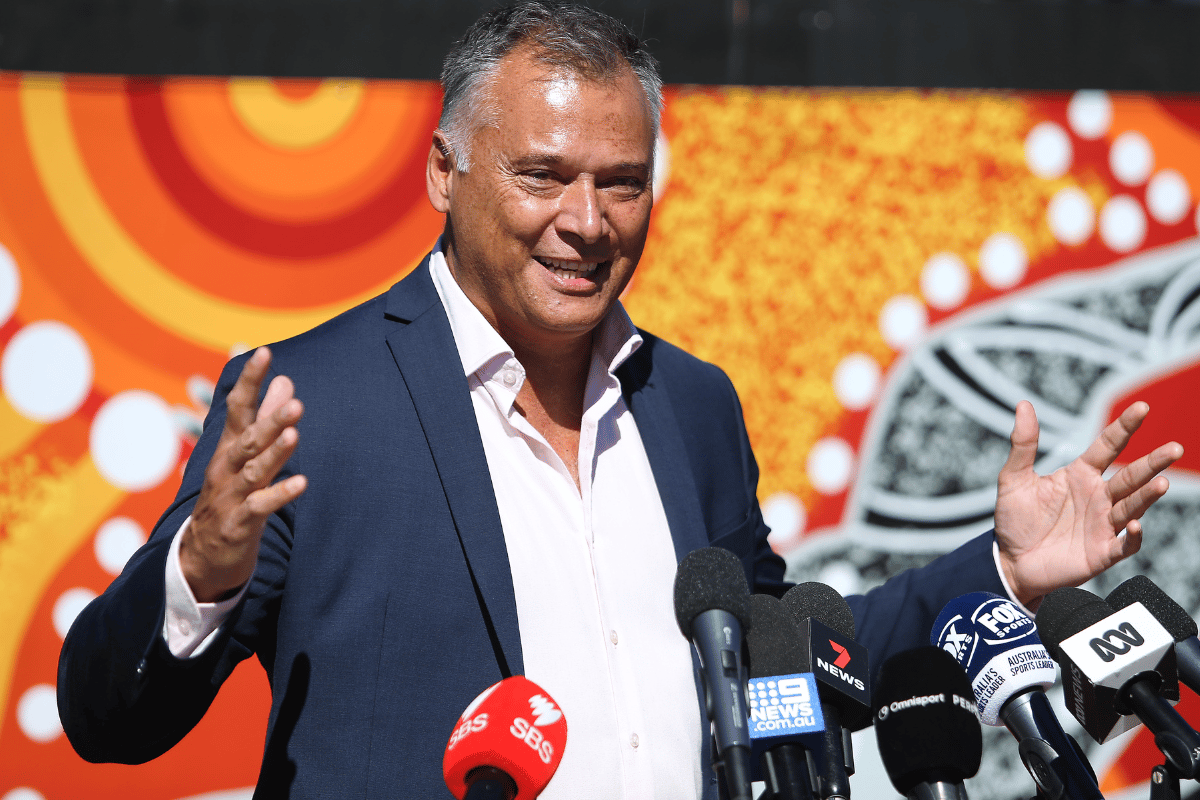 This week he was announced as the new permanent host of ABC's weekly flagship discussion program Q+A.

Grant will begin his new role on August 1 with a special edition of Q+A to mark this year's Garma Festival in north-east Arnhem Land.

"Garma is a talking place where the nation asks itself hard questions about who we are. It is an honour to take the helm of Q+A from there," Grant said in a statement.

Hamish Macdonald walked away from the show in July 2021, having taken over from founding host Tony Jones who departed in 2020. Macdonald said it was a challenging role because of the constant abuse via social media he received. The ABC then trialled a rotating roster of Grant, ABC Melbourne Radio host Virginia Trioli and Insiders host David Speers, before deciding to stay with Grant.

As Grant said: "Hosting Q+A is a huge responsibility. I feel the weight of the audience’s trust in me and the program. I will approach my role with integrity, decency and humility."

Reflecting on that little boy who had experienced racism in school, Grant said he wishes he could tell his younger self that his future looks bright.

"Open up to the world: be someone who continually asks questions," he said. "12-year-old Stan and today Stan aren't that different. 12-year-old me wouldn't be surprised at the person I've become. He would be surprised about where I've ended up. He could never have imagined this was the future awaiting him."

If you find yourself needing to talk to someone after reading this story, please call Lifeline on 13 11 14.