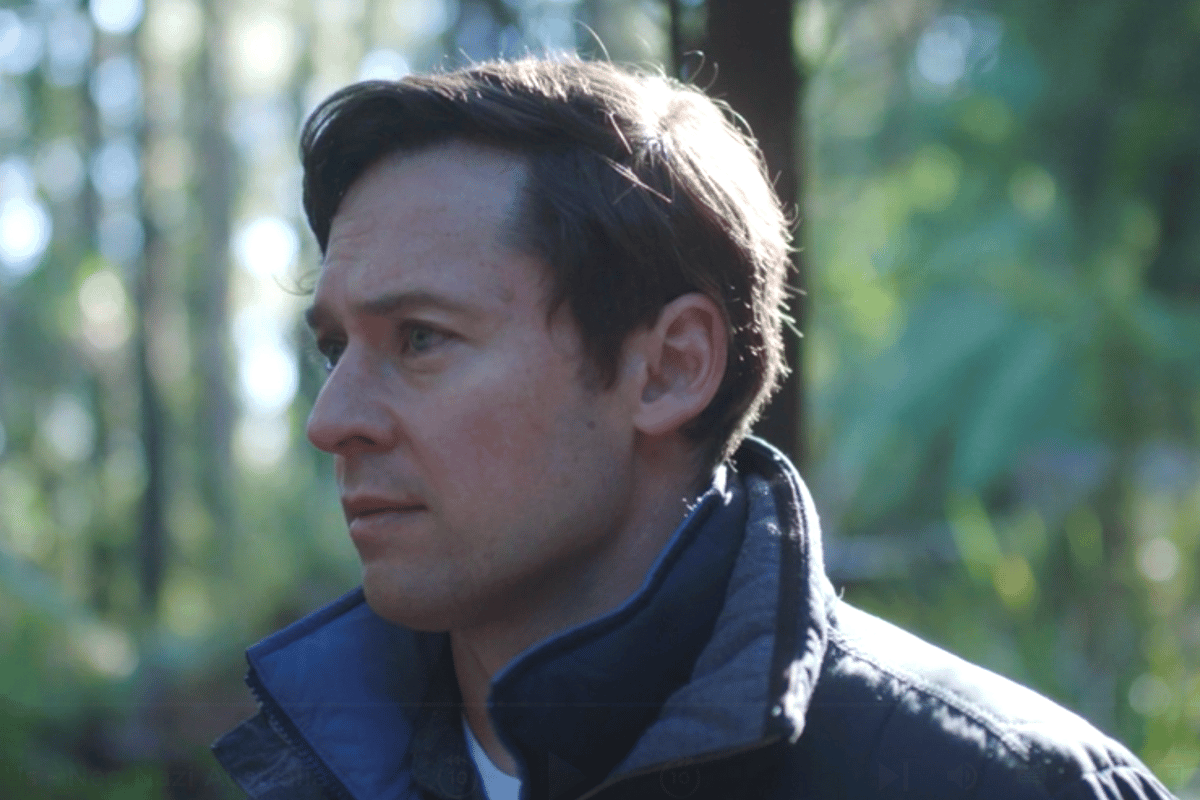 While celebrating a long weekend in central Victoria, a hiker was in the Grampians National Park when he peered into a cave-like rock formation and noticed dozens of men raising their arms in a Nazi salute and shouting "white power".

The hiker had come across Australia's National Socialist Network, exposing an evil that is hard to comprehend: a group that wishes to incite a race war and promote hatred.

It's this group that was the focus of an eye-opening investigation led by 12-time Walkley Award-winner Nick McKenzie.

A collaboration between Stan, 60 Minutes, The Age, and The Sydney Morning Herald, the new The Stan Original Documentary Revealed: Amongst Us - Neo Nazi Australia explores the terrifying rise of neo Nazi activity in Australia.

And terrifying it is, yet we can't look away.

Watch the trailer of Stan's Amongst Us - Neo Nazi Australia. Post continues below.

The documentary follows a brave undercover individual who infiltrates the National Socialist Network - Australia's largest far-right extremist network - and exposes the everyday Aussies at the centre of the organisation and the lengths they go to extend their hateful influence.

Prior to the investigation, McKenzie knew that neo Nazism was dangerous. But he had no idea just how insidious it was, and that the goal of the National Socialist Network is to make their ideology mainstream.

"I knew the movement was growing," McKenzie told Mamamia. "ASIO had issued public warnings, there had been sightings of these guys in national parks, and whispers of counter-terror task forces watching them. But no one in Australia had seen these groups up close."

By going undercover, McKenzie's team were able to reveal "the inner workings of the biggest neo Nazi cells" including their mission to set up a "white-only enclave and infiltrate our mainstream political system". 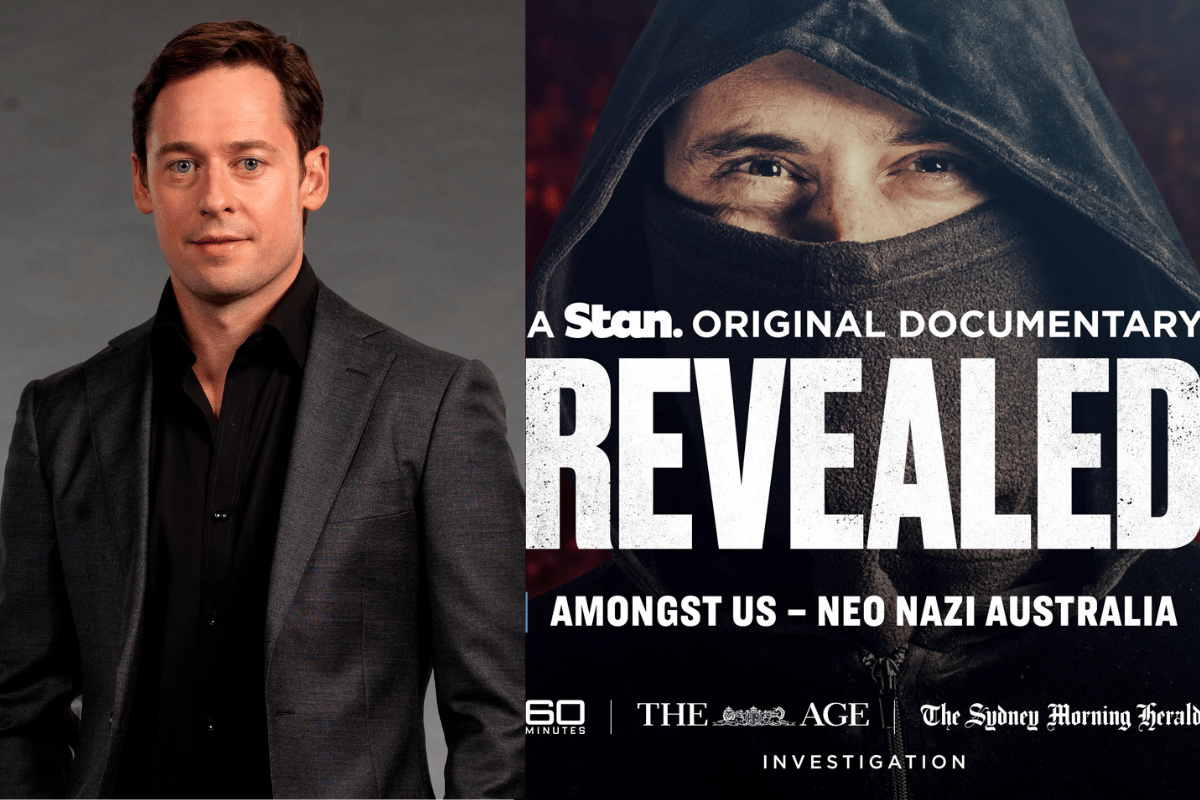 Journalist Nick McKenzie and Stan's Amongst Us - Neo Nazi Australia. Image: Stan. And what the investigation uncovered was astounding.

While the undercover was inside the group, he was able to secretly film the Network's operations and planning. And for McKenzie, the moment he knew his team had 'struck gold' was when the undercover filmed the group incriminating themselves over and over again.

"It was wild when the undercover filmed what was meant to be these secret meetings. He filmed a neo Nazi recruit initiated in a bizarre ritual: the group celebrating Hitler's birthday with a midnight ceremony at a cemetery. But also getting glimpses into the neo Nazis' family life - their girlfriends and wives - was eye-opening," McKenzie said to Mamamia.

With dozens of members, the National Socialist Network portrays itself as a group of "outdoorsmen reviving the imagined traditions of a white Australia". But in reality, they are even more hate-filled than what that description alludes to.

Their self-appointed leader, Tom Sewell, was one of the central figures of McKenzie's investigation.

"The members of the group range from the lost and curious to the fully committed whole-of-life neo Nazis. Sewell is wholly committed to building white ethno-states. It sounds nuts, but [people like him] genuinely think it's achievable," McKenzie explained.

Of course, the National Socialist Network isn't the only collective that shares far-right extremist ideology.

But for people in groups like these, there are often a number of shared characteristics, such as feelings of anger, hatred, self-righteousness and also disenfranchisement.

"There is a hell of a lot of anger directed at those who these neo Nazis blame for taking away their opportunities and power: Jews, mainstream media, politicians, police. So many of these guys are desperate to find a brotherhood or tribe, something that will make them feel part of something bigger than themselves. It's a bit like a bikie club, enforcing loyalty and secrecy."

Of course to uncover the sheer lengths these men would go to was both confronting and enraging for McKenzie. But it also sadly highlighted that antisemitism and racism continue to flourish in modern-day societies.

From October 1, 2020 to September 30, 2021, antisemitism increased by 35 per cent in Australia, according to the Executive Council of Australian Jewry's (ECAJ) Annual Antisemitism Report.

But Jewish people aren't the only target group for neo Nazis. It's also anyone who is not white.

Take for example the white supremacist rally that took place in Charlottesville Virginia. Or the Christchurch massacre, where an Australian neo Nazi murdered 51 members of the Islamic community and injured 40 others in a terrorist attack.

And astoundingly, it was these horrific events that have reiterated and solidified the beliefs of the men associated with the National Socialist Network.

"The most disturbing aspect of our investigation was capturing some of these guys comparing the Christchurch terrorist to Nelson Mandela," McKenzie said to Mamamia. "It was chilling to hear Sewell try to inspire his recruits that they need to press on with their white power revolution to help the Christchurch mass killer get out of jail." 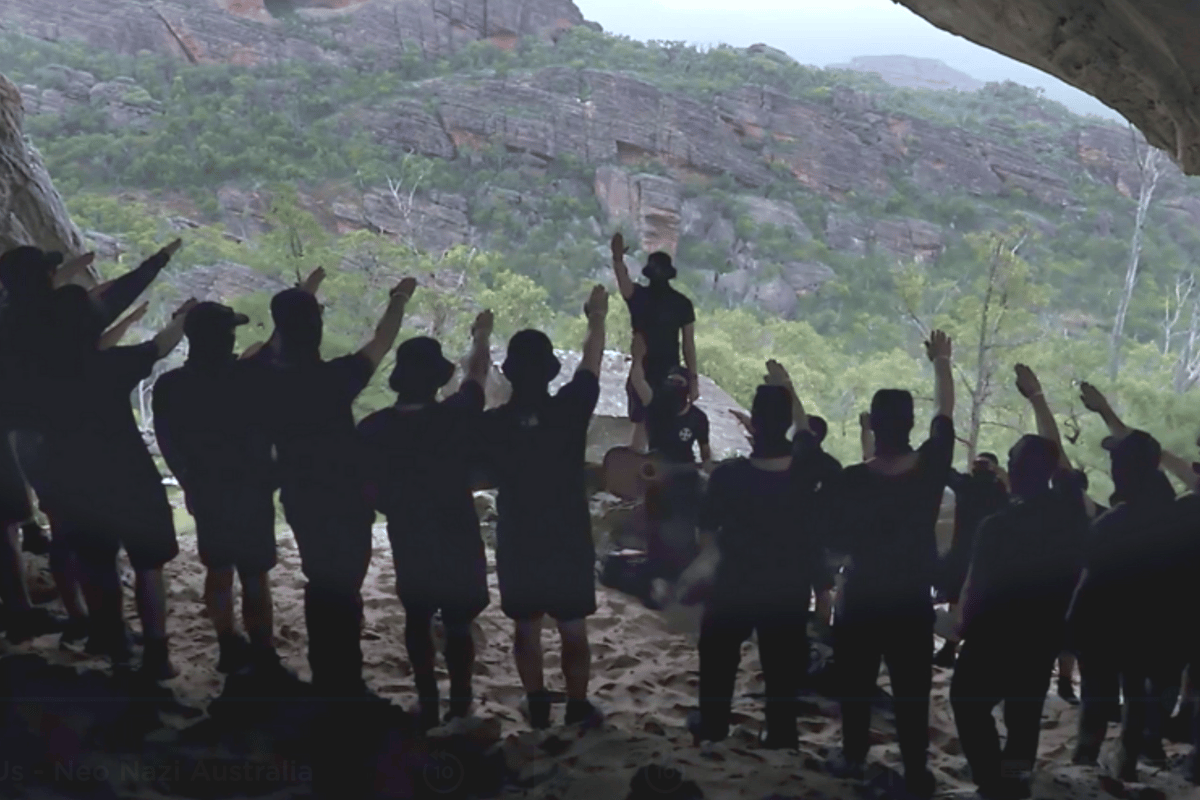 Images captured of the National Socialist Network in the Grampians National Park. Image: Stan. Deep into the investigation, things were becoming unsafe for the undercover, with McKenzie and his team having to make the call to pull him out immediately. It was a necessary decision, McKenzie said.

"The safety of the undercover was paramount. To be frank, the operational security of the group was hopeless. This helped us keep the undercover safe. Still, there were moments of great tension and even panic. As soon as it started getting too dangerous, we shut it down," he explained.

It's a challenging balance for an investigation lead to find: a balance between truth-telling and capturing the story versus ethical dilemmas and ensuring personal safety. But of course, safety will always be the main objective, given the violent nature of this Network.

It's also relevant to note that McKenzie himself is Jewish. And in the documentary, McKenzie does detail what it was like for the Network to discover his own heritage and level antisemitism against him.

"They found an old Tweet I had done where I disclosed that my mother is Jewish. I am proudly Jewish, but it's my personal life, and they made a very personal attack which is upsetting. It makes you realise what total f**kwits they are basically. I underestimated just how dangerous some of them are."

As Director-General of Security at ASIO, Mike Burgess, told McKenzie: "Their views and promoting acts of violence is of grave concern and it does get the full attention of ourselves (ASIO) and federal police." Burgess also noted that approximately 50 per cent of ASIO's critical caseloads are dedicated to groups like neo Nazi cells.

Even though it's a confronting watch, there's good reason why documentaries like these need to continue being made. To spotlight an important conversation, provide quality journalism to the Australian public and ultimately bring unjust people and institutions to account.

"I wanted to open the public's eyes," McKenzie said. "Seeing is believing. The aim was to inform the public that the threat is real and rising and we, as a society, need to confront it."

Further announcements about Revealed projects, including The Price of Hate and Reefshot Original documentaries, will follow later this year.

The Stan Original Documentary Revealed: Amongst Us - Neo Nazi Australia is now streaming, only on Stan.