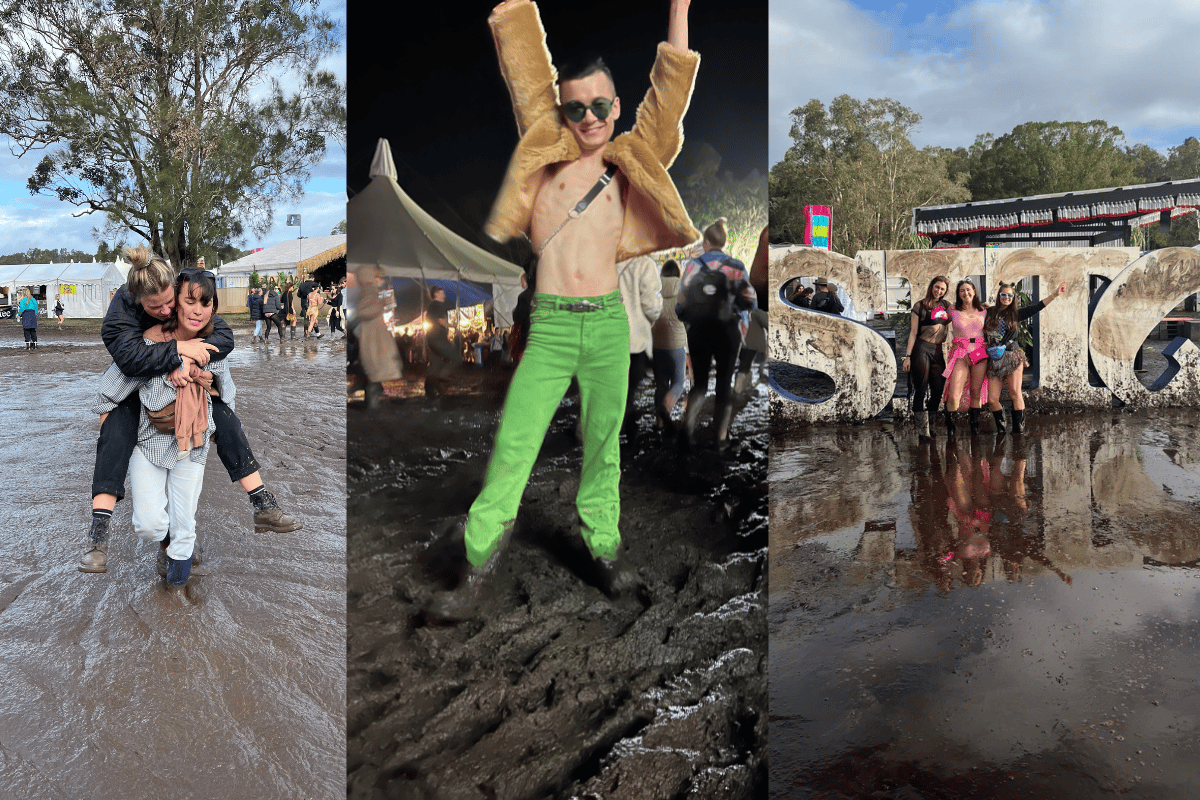 In the midst of a really fraught time in Melbourne lockdown, Jane De Lorenzo and her two friends decided to purchase tickets to go to a future Splendour in the Grass festival at the North Byron Parklands.

They purchased the tickets back in 2020, so they were ecstatic when this year's event finally got the green light to go ahead. It did mean they would be parting with hundreds of dollars – airfares from Melbourne, ticket costs, camping permits, festival outfits and more. But they were determined to make some memories.

When they arrived, things were off to a challenging start.

"From start to finish, communication and the general organisation of the event was unacceptable," Jane said to Mamamia.

On Friday – the first day of the event –organisers said the festival would go ahead "rain, hail or shine".

Jane can appreciate the sheer stress organisers were under – after the impacts of bushfires and COVID, Splendour in the Grass has faced many hurdles over the last few years, and so has the arts and live music industry as a whole.

But when news spread that the first day was cancelled due to serious weather and site conditions, Jane didn't get the memo from official organisers – she had to rely on word-of-mouth from fellow festival goers instead.

"We were obviously disappointed, however after seeing the grounds the next day we realised how negligent it would've been for them to continue on," Jane said.

But even 24 hours later, the grounds were still extremely muddy and quite dangerous. Of course, the impacts of extreme weather are something the wider Byron and Lismore community know too well already.

Listen to this episode of The Spill, which discusses the chaos of Splendour. Post continues after podcast.

But for the festival goers that Mamamia spoke to, the mud wasn't the central issue, as many were prepared with tall gumboots. Instead, it was the overall lack of organisation that left many feeling disenfranchised and concerned.

"Saturday was much better – we had a lot more hope going in – however once again the lack of organisation was hopeless. Wait times were major, there were lots of VIP areas and special tents your average joe couldn't get into unless you were an influencer. Plus the lines to get food and drink were unachievable," Jane explained.

"However, where it really came undone was the transportation. We paid $25 per day for our bus ticket with officials communicating there would be buses every hour going into the festival and every ten minutes coming out. Getting home was a living nightmare! People were crammed together trying to work out where to be, where to go, thousands of people pushing through crowds and just so confused – absolute chaos."

Jane was among thousands squished together like sardines, ankle-deep in mud, in the middle of the night, freezing cold and feeling anxious. This lasted for hours on end. Like many, Jane didn't get home until daylight.

"We were hours into our wait before any staff member even addressed us and it wasn't until people began passing out and looking visibly ill that shared water was handed out and then around 4:30am, bananas were given to the crowd." 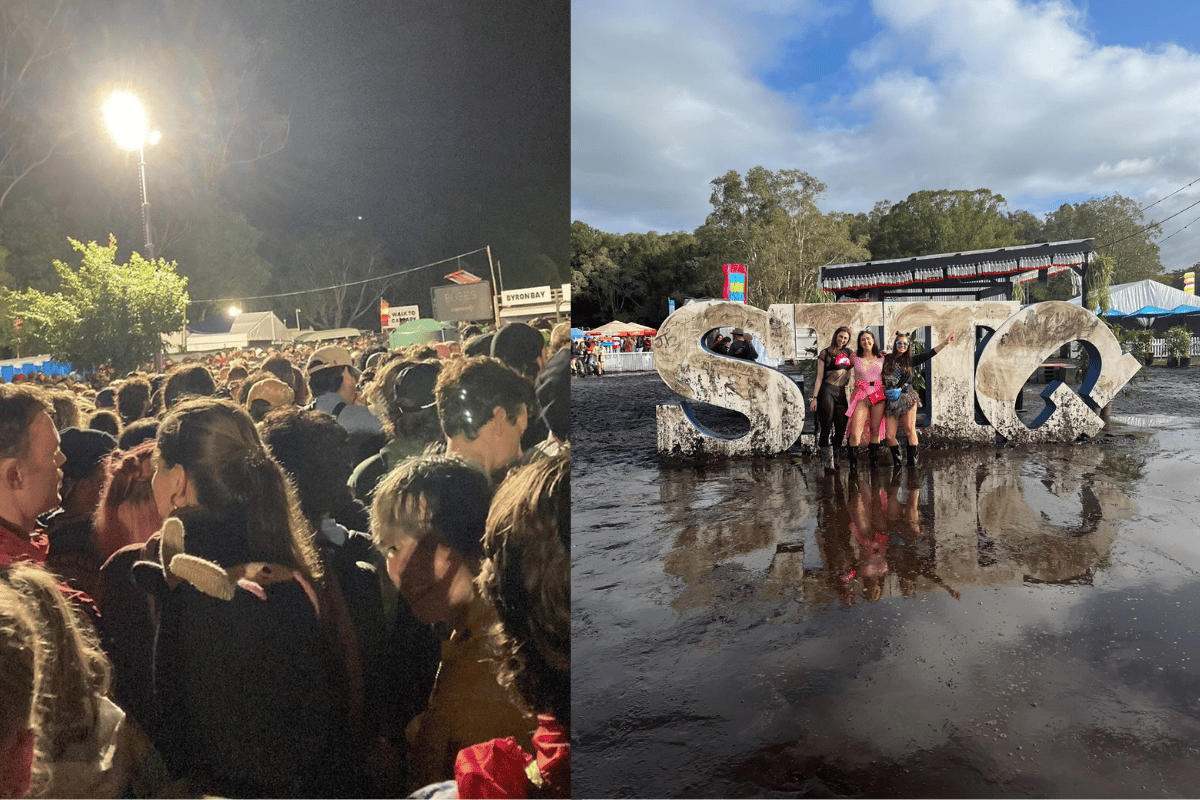 But she felt let down by all that she witnessed and experienced – seeing volunteers and police standing on the other side of the fence for hours on end, watching the crowd of punters desperately trying to get home.

"I'm not usually a 'complainer' and I feel bad being so negative but it was one of the worst experiences of my life. We did not go back on Sunday – firstly due to being so sore and sick from the line but because we honestly couldn't trust the organisers," Jane said.

"Parameters should have been put in place and contingencies to ensure the situation didn't reach that point. On a positive note, the punters stuck in the hell of a line were absolutely amazing! They were respectful, supportive of everyone there and patient beyond reasonable means. We all banded together and got through – those people and the music were the true highlight of the festival!"

Lots of Splendour in the Grass attendees have taken to social media to vent their frustration.

One woman said camp officials refused to let her and her friend out of the gate in front of her, even while she was crying and desperately asking them to let her leave the flooded campgrounds.

Another shared her frustrations with event organisers. She said the mud wasn't really the issue, as festival goers knew what they were getting themselves into following lots of news reports and weather updates. It was the fact they couldn't secure a refund and the lack of organisation around the bus lines that was most upsetting.

just because i shared my tiny experience and used it as a way to laugh about it and not panic, does not mean that i am insensitive to the hardships of others. If anything it makes me more aware of what people have been going through.

Been in a car queue for 8.5h, still potentially 3hours from getting in the camp ground. No staff, no information, think this is Australia’s Fyre festival. A hell scape at Splendour #SITG2022 pic.twitter.com/lO0BOCVHRx

But things weren't completely bleak for all who attended the festival.

Yahn Monaghan shared with Mamamia that for him and his group of friends, they had a positive experience at Splendour in the Grass.

"Luck was on our side. One guy sent me a video of his campsite and it was up to his ankles in water, meaning the tents were flooded. But somehow our side of the campground wasn't flooded," he explained.

"I did find there was a sense of community there, I mean we were pretty much all in the s**t saying 'we're in this together', and we need to make the most of it." 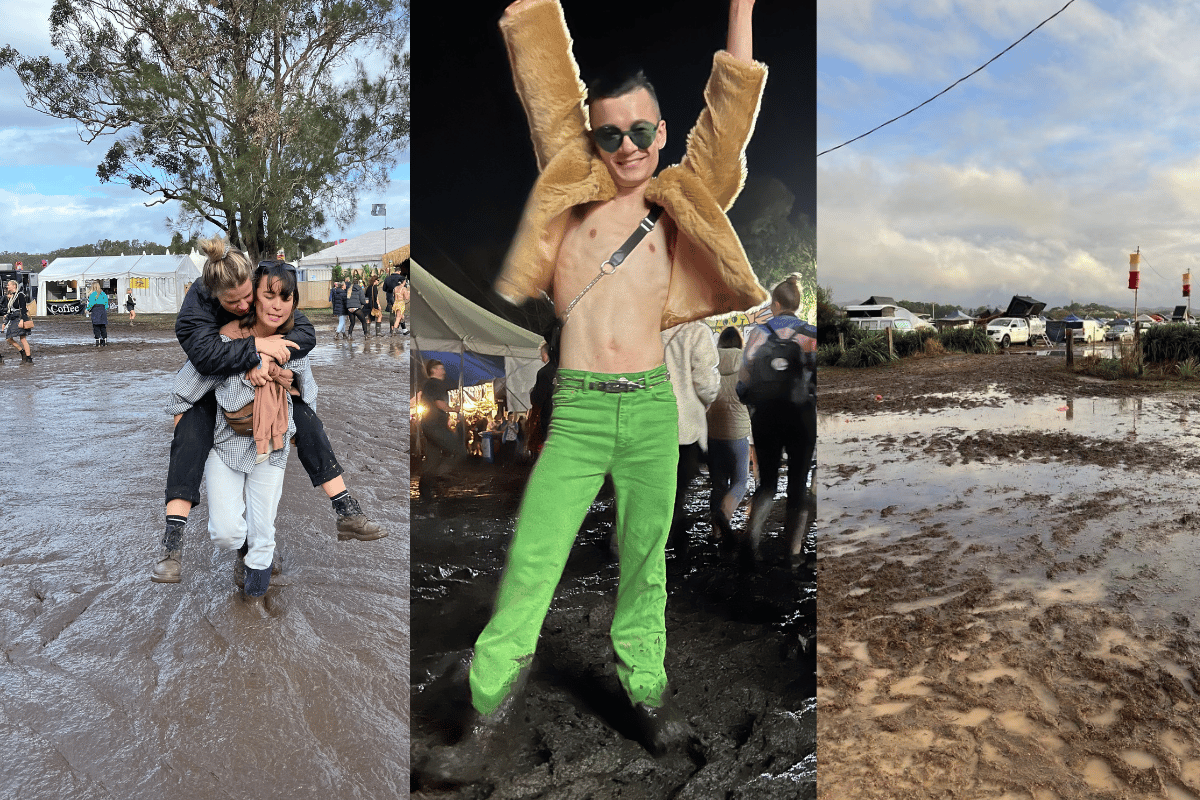 Yahn Monaghan at Splendour in the Grass. Image: Instagram @yahnnyboi. Although Yahn was very fortunate in his experience, he said that looking back on the entire event, he feels bad for those whose experience was the complete opposite to his. Not to mention, the sheer amount of setbacks the live music industry has faced for so long.

"I think considering the challenges the arts as a whole has faced throughout COVID, not to mention the floods in Northern NSW, it was really special to still have Splendour in the Grass go ahead. I'm grateful for the effort it took," he said.

"If anything, there are learning lessons the organisers can take from this year and bring into next year's event. But put it this way – it's a weekend no one will forget! And thank god gumboots were invented."