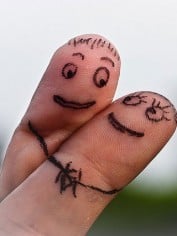 It’s sad to say it, but statistically speaking, you’re never as happy in your marriage as when you were newly wed.

Researchers call this the “downward trajectory in marriage satisfaction”, and while it may not be true for your relationship, most people have certainly experienced some sort of decline in their loved-up levels post-Honeymoon phase.

Fortunately, there’s a solution – and it’s crazy quick and easy.

If you don’t have time to watch the video (it’s worth it though, we swear), here are the crib notes:

Now the only problem with this is, it might be a bit tricky to explain to your partner that you’d like to take 21 minutes out once a year to do a journalling exercise about your last big fight. But once they stop laughing at you, give it a go.

Not only were the people who tried the marriage hack happier in their relationships, they were also less stressed, less depressed and more satisfied with their lives in general. Sounds like it’s worth the time.

How long have you and your partner been together? How do you keep your marriage strong? What do you think the key is to a long and happy relationship?

My husband and I are on our way to 50 years married in a couple of months. We were 20 & 18 when we married, I was pregnant. We were totally opposite personalities, he volatile, me introverted & quiet. However many up & downs we've had, lots of downs, we've managed to stay together somehow. The ubiquitous "they" said it would never last but here we are, possibly quite the happiest we've ever been having mellowed but still healthy and able to enjoy life together.

I
Iggy Crash 8 years ago

Congratulations!!! That's amazing and definitely worthy of a big celebration.

This doesn't mean the technique caused the couples to be happier. It could mean that happier couples were more likely to try the technique, or had more time on their hands to try it due to a lifestyle that was not very stressful in the first place. Has the happiness level of the couples prior to trying the technique been established? Sorry to seem cynical, but so many of these studies are flawed from the outset.

It's always good to ask these sorts of questions. Experimental conditions means that they were put in a group and made to write these things down. Then at the end of the testing period, compared to a control group who didn't write, they had better outcomes. Doesn't sounds like it was observational and occurring naturally in the world, so while still correlational rather than causation, it is safe to say that there is a probability that the relationship is in the direction reported - sounds like the active agent here was perspective taking - something that can have the ability to solve many conflicts if we employed it properly :)