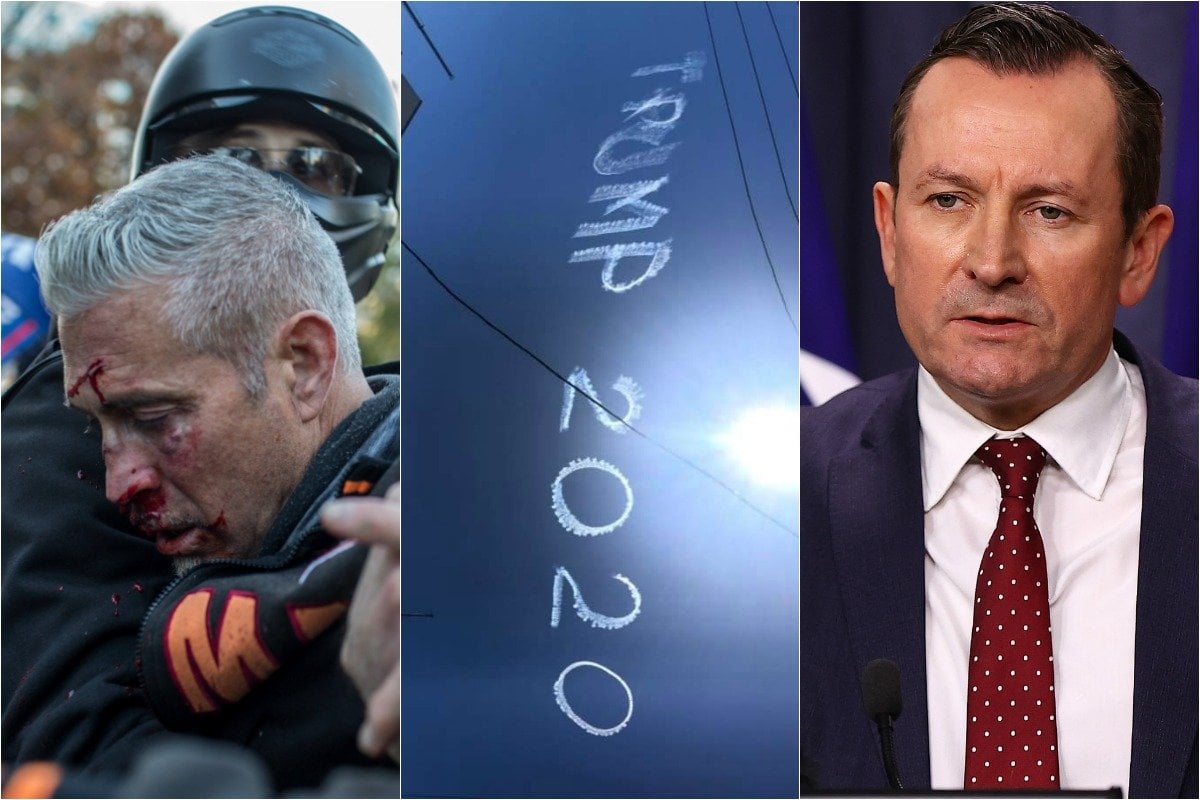 South Australia has 17 new cases of locally-acquired COVID-19 after a worker from a quarantine hotel infected family members.

An 80-year-old woman was diagnosed on Saturday after she went to Adelaide's Lyell McEwin Hospital for a test, with three of her family members confirmed positive on Sunday.

On Monday the ABC is reporting 17 cases have now been confirmed as part of the cluster.

BREAKING: Four new cases of COVID. One in hotel quarantine. An 80 year woman has tested positive and is being considered community transmission. #9newscomau #saparli pic.twitter.com/dKXqtq3BYH

Less than 48 hours after Western Australia removed its hard border restrictions, the state is now forcing anyone arriving from South Australia to self quarantine "in a suitable premise" for 14 days after the outbreak.

WA's hard border transitioned to a controlled border on Saturday, meaning travellers from most states were able to cross the border without needing to quarantine for the first time in 222 days.

Some South Australians were told about the emergency Sunday changes after touching down in Western Australia.

Travellers heading to WA from South Australia will have to self-quarantine effective immediately after an outbreak in the state forced WA Premier Mark McGowan to tighten the rules on WA's recently relaxed border https://t.co/xBnm5E9OxY

Trump tweets that Biden 'won' the election as US protests turn violent.

President Donald Trump has appeared to acknowledge publicly for the first time that Democrat Joe Biden won the Nov. 3 U.S. presidential election but asserted that it was "rigged", reiterating his false claims of widespread voting fraud.

"He won because the Election was Rigged," Trump wrote on Twitter on Sunday morning, not referring to Biden by name.

"NO VOTE WATCHERS OR OBSERVERS allowed, vote tabulated by a Radical Left privately owned company, Dominion, with a bad reputation & bum equipment that couldn't even qualify for Texas (which I won by a lot!), the Fake & Silent Media, & more!"

He only won in the eyes of the FAKE NEWS MEDIA. I concede NOTHING! We have a long way to go. This was a RIGGED ELECTION!

Trump's campaign has filed lawsuits seeking to overturn the results in multiple states, though without success, and legal experts say the litigation stands little chance of altering the outcome of the election.

On Saturday, tens of thousands of Trump supporters ventured into Washington to echo his claims of election fraud, with night-fall bringing clashes with counter-demonstrators that saw fistfights, at least one stabbing and at least 20 arrests.

Dozens of Proud Boys, a far-right group, marched in the streets, some wearing helmets and ballistic vests, while members of the loose far-left movement known as Antifa staged their own counter-demonstrations.

The tensions extended to Sunday morning. Two police officers were injured and several firearms were recovered by police. 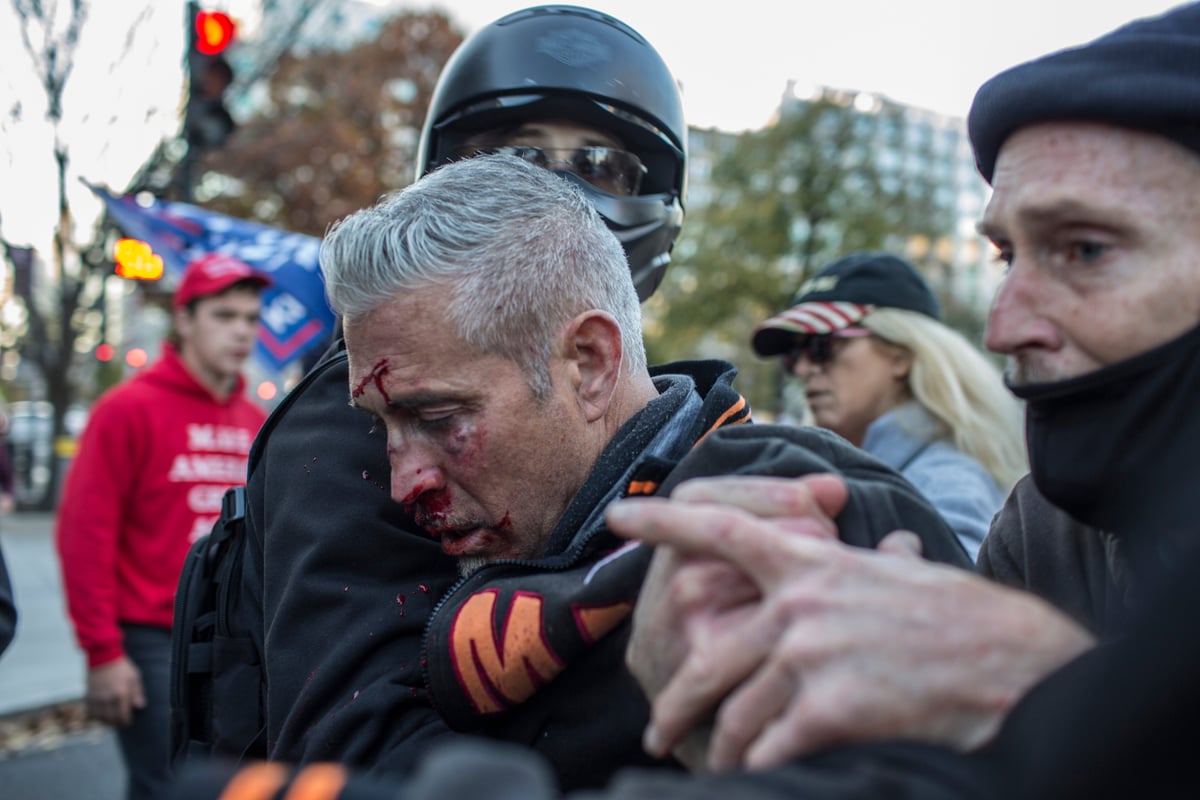 Protests turned violent in Washington as President Trump continues to rally his base against "rigged elections." Image: Probal Rashid/LightRocket/Getty.

Protests extended as far as Sydney, Australia, with locals witnessing "Trump 2020" being written in huge skywriting font across the sky on Sunday.

The words 'TRUMP 2020' have been emblazoned across the Sydney skyline as, on the other side of the world, pro-Trump rallies build across the US. #9News https://t.co/exdj0aARvD

Andrews hints at easing of mask rule next Sunday.

The Victorian government admits it cannot mandate coronavirus rules "follow" residents when they cross the border, including its increasingly controversial mask edict.

Premier Daniel Andrews on Sunday said he would seek advice from Chief Health Officer Brett Sutton on "whether Victorian rules follow you when you move into another state".

NSW will reopen its border with the state next Monday before South Australia follows suit on December 1.

Yesterday there were 0 new cases, 0 lives lost and 0 cases with an unknown source. Three active cases remain. There were 8,323 test results received – thanks to all who were tested #EveryTestHelps https://t.co/eTputEZdhs#StaySafeStayOpen#COVID19Vic pic.twitter.com/ZdsQ7toFtA

A government spokeswoman later clarified the premier's comments, however, noting it had no jurisdictional power over people outside of Victoria.

Mr Andrews is still adamant masks remain necessary but hinted at possible tweaks as Victoria prepares for its final step of easing restrictions next Sunday.

Victoria reported a 16th consecutive day on Sunday without a new case or death.

NSW authorities are worried warm weather could prompt further COVID-19 rules lapses with much of the state expecting temperatures in the high 30s today.

NSW chalked up its eighth consecutive day without a locally-acquired coronavirus case, with all nine cases reported on Sunday among overseas travellers in hotel quarantine.

Despite the streak, NSW Health epidemiologist Christine Selvey said the community couldn't afford to be lulled into a false sense of security.

"With the weather becoming warmer and people starting to attend more social gatherings, NSW Health is calling on the community to maintain COVID-safe behaviours," she said.

Authorities are urging testing for symptomatic people in parts of west and northwest Sydney after traces of coronavirus were found in sewerage systems.

"The catchment takes sewage from approximately 180,000 people," NSW Health said of one network.

The traces were found in samples taken on Thursday from a wastewater network which services parts of suburbs including Leppington, Catherine Field, West Hoxton, Hoxton Park, Edmondson Park, Prestons and Miller.

Australia will build the southern hemisphere's largest flu vaccine manufacturing plant in a bid to sure up its response to future pandemics.

The federal government has struck a $1 billion, 12-year deal with CSL-owned subsidiary Seqirus for long-term access to influenza and fever vaccines, as well as life-saving antivenoms.

Under the new agreement, Seqirus will invest $800 million to develop a high-tech vaccine manufacturing facility near Melbourne airport to replace its more than 60-year-old Parkville site.

Works will start next year - creating 520 construction jobs - with the site expected to be fully operational by mid-2026.

While the federal government stumped up the money, the Victorian government played a part in procuring the land.

Seqirus is the only company that makes influenza and Q fever vaccines in Australia, while no other firm in the world produces life-saving antivenoms against 11 poisonous Australian snakes, marine creatures and spiders.

Aboriginal and Torres Strait Islander children are almost 10 times more likely to be living away from their families than non-indigenous children.

A new report - The Family Matters Report 2020 - will reveal indigenous children continue to be removed from family and kin at disproportionate rates, disrupting their connection to community and culture.

"Our children are 9.7 times more likely to be living away from their families than non-Indigenous children, an over-representation that has increased consistently over the last 10 years," Family Matters chair Sue-Anne Hunter said.

The Family Matters Report 2020 documents the national crisis of continuing and growing removals of Aboriginal & Torres Strait Islander children from their families investigates the reasons for these removals, & highlights the solutions @fam_matters_au #OurMobsMatter

"It is time to completely change this broken system that is not working for our kids."

Aboriginal and Torres Strait Islander children represent 37 per cent of the total population of all children that have been removed from their parents - a staggering 20,077 children.

"Without urgent action, the number of Aboriginal and Torres Strait Islander children in out-of-home care is projected to double by 2029," Ms Hunter said.

Australia's flagship airline Qantas will celebrate its centenary with a low-level flyover of Sydney Harbour.

Qantas was established exactly 100 years ago on Monday in Queensland's outback by two veterans of the Australian Flying Corps, Hudson Fysh and Paul McGinness, together with local grazier Fergus McMaster.

Dubbed "The Flying Kangaroo", Qantas is the oldest continuously-operating airline in the world and has an impeccable safety record.

In pre-COVID times it was the only airline flying to every inhabited continent.

The 100-minute flight at sunset on Monday will carry 100 Qantas employees as well as selected Frequent Flyer passengers.

- British Prime Minister Boris Johnson is self-isolating after contact with someone who tested positive for Covid-19, Downing Street says.

- The Prime Minister will fly to Japan tonight becoming the first foreign leader to meet the country's new Prime Minister, as hopes are raised for a breakthrough in our trade war with China.

- Gunmen in western Ethiopia have killed at least 34 people in an attack on a bus.

- Thousands of Peruvians have taken to the streets again in rallies against President Manuel Merino as his interim government defends the abrupt ousting of former president Martin Vizcarra.

- A Chinese racing pigeon has sold for a world record price of 1.6 million euro (AUD $2.6 million).