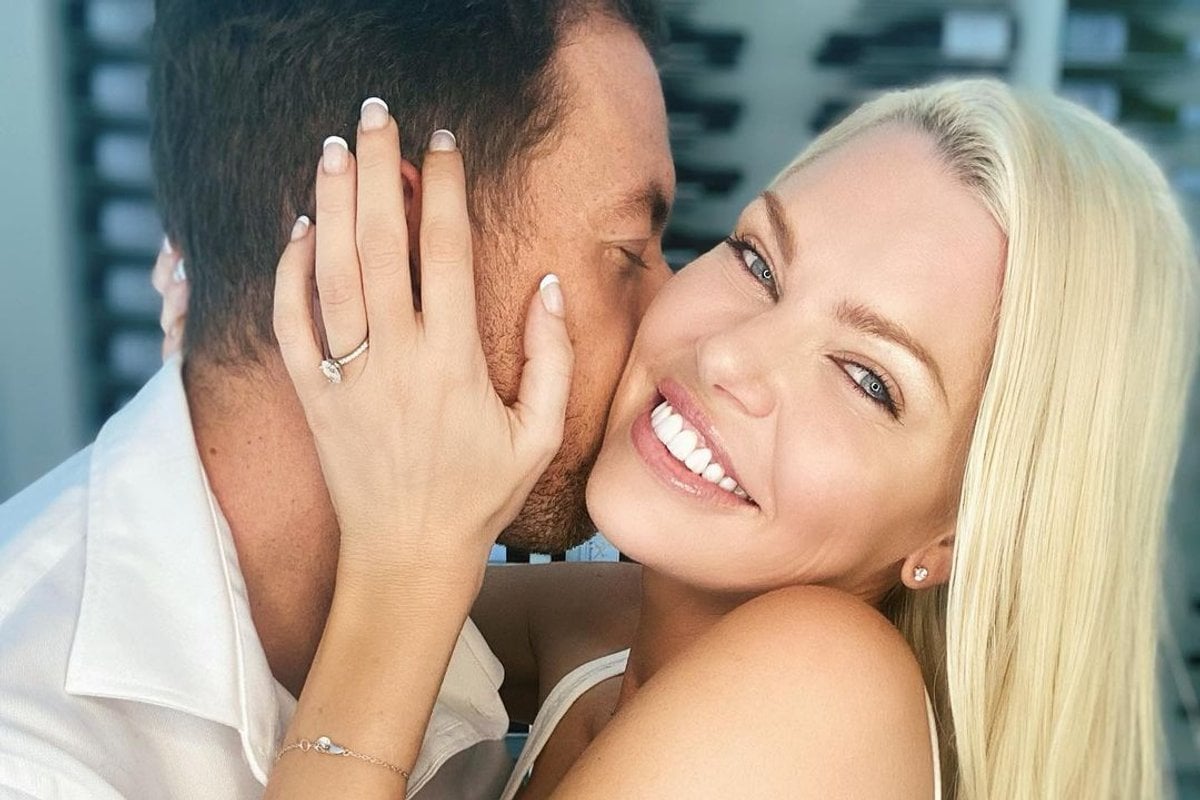 "I'm engaged," Monk shared on Instagram at the time.

"I honestly can’t thank you enough for all the love and support. I know I have the coolest people following me and you’ve always had my back and I feel so cared about. You’re absolute bloody legends," she continued.

"I’m not very good at being mushy. I’m trying to say I absolutely adore you. Joshua and I are so happy."

Gross, 37, who is a neurosurgical robotics consultant, also shared the news on his own Instagram page, writing: "Luckiest guy in the world."

Now, almost one month after announcing their engagement, Monk has shared how Gross proposed on Christmas Day at home while enjoying a cup of coffee, in an interview for Stellar magazine.

"He knelt down, and I just said yes before he even asked," she told the publication.

Gross also revealed that he was "a little heartbroken" when he saw paparazzi photos of him leaving a jeweller in November, which spoiled the surprise.

"I'd gone through six months of cloak-and-dagger secrecy to get this done without Sophie knowing because I wanted her to have a good surprise," he explained.

"Everything is so public for her, I thought this is one thing we can have behind closed doors. So that was a little heartbreaking. I was planning on proposing a little earlier and (the media attention) sort of paused things for a while."

Sophie added: “There was a paparazzi shot of him leaving Luke Rose, so I kind of guessed – and my heart broke for the surprise. But then I guess I was prepared in a way."

The couple also shared that they're planning on having a more intimate wedding and they're looking to start a family in the future.

"We'd like a family, for sure. It's just about timing," Sophie said, adding that they'll "play it by ear" with their work schedules.

The former Bachelorette previously spoke about her decision to undergo embryo freezing with Gross in October last year.

"We both want a family so he’s all for it," she said during a webinar with Monash IVF.

"I did it obviously because I want a family," she continued. "You always think 'oh it'll happen' and you'll meet the right person. So I never really worried about it and I kind of hit 30 and I was like, 'Yeah, I'm still cool' and then I blinked and I was nearly 40 and I was like, 'Oh, God.' Before you know it time's gone."

The 41-year-old also explained why she didn't do it earlier.

"I didn’t have the right partner, now I do and I’d like to do that. I’d love to try and have one," she said. "It’s just peace of mind me knowing that it’s there."

"I had just finished filming Love Island in Mallorca and was on my way to San Francisco for a random TV gig with Channel Nine when I made a last-minute decision to go back to Australia," Monk told the Sydney Morning Herald last year.

Speaking to Stellar in 2019, the television presenter shared that she knows Gross is "the one".

"He’s everything I want in a person and more... I don’t think you could invent a better person for me. I’ve gone for something completely opposite to what I’ve ever gone for," she said.

"He’s a man; a grown up. He’s really sweet without being annoying, and he’s calm and makes me feel safe."

Sophie Monk's time on The Bachelorette.

In 2017, the nation had high hopes for the lovable, self-described bogan from the Gold Coast, who we first met as part of the girl group Bardot on Popstars way back in 2000.

The TV personality's season gave us so many golden moments, from the great 'pissing in the pot plant' debacle to seeing runner-up Jarrod Woodgate struggle to walk through sand after being told he didn’t have Monk’s heart.

But when Monk and her series winner Stu Laundy announced their breakup in January 2018, less than four months after The Bachelorette finale aired, we couldn’t help but feel disappointed after being so invested in her reality TV dating journey.

But despite no long-lasting relationship coming from the show, Monk told The Sydney Morning Herald that she has "no regrets" about going on the reality TV show.

"I used to be a bit of a walkover and a people pleaser. The pace of The Bachelorette taught me to be more confident and honest with myself. It also led to lots of other work, like hosting Love Island Australia," Monk told the publication.

In an interview with TV Week, however, the 41-year-old shared that her relationship with Gross was nothing like her previous ones.

"I wasn't comfortable with myself and would choose people who weren't right for me," she said.

"When you don't feel good about yourself, you attract the wrong thing or you look for somebody to fulfil you. But you need to meet someone who's a bonus to you, not someone to fix you. That took me ages [to realise]."