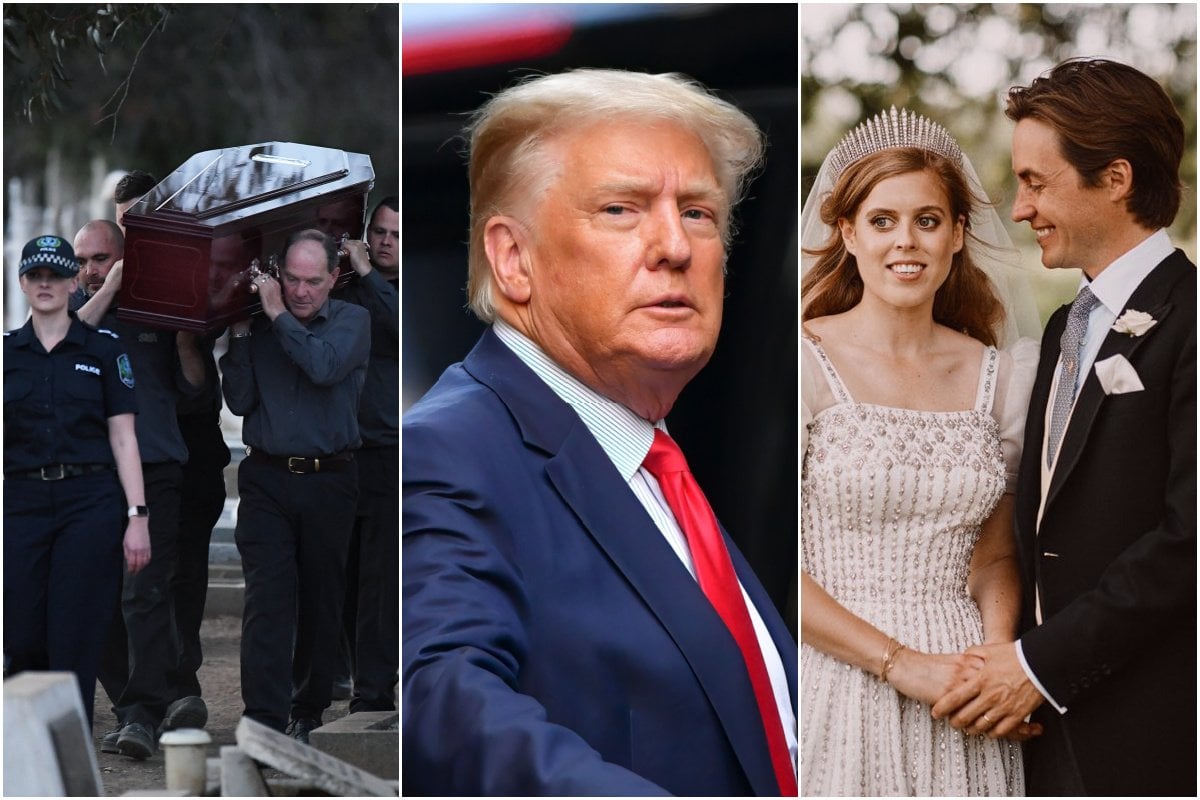 South Australian forensic specialists will begin attempting to build a DNA profile of the so-called Somerton Man from his exhumed remains.

The man's body was found on Somerton Beach on December 1, 1948, with the circumstances of his death remaining an open police investigation.

Major crime detectives and staff on Wednesday spent 12 hours recovering his body from a burial plot at the West Terrace Cemetery.

Four pallbearers carried a coffin containing his remains out of the cemetery under police escort.

They will be taken to Forensic Science SA in a bid to solve the more than 70-year mystery over his death and identity.

Forensic Science SA assistant director Anne Coxon said modern technology was light years ahead of the techniques available when the body was discovered in the late 1940s.

"Tests of this nature are often highly complex and will take time," she said.

"However, we will be using every method at our disposal to try to bring closure to this enduring mystery."

It’s the case that’s baffled detectives and amateur sleuths for decades - the Somerton man - named after the Adelaide beach he was found on, in the strangest of circumstances.

Today police began exhuming his body in an effort to finally solve the mystery of who he is. pic.twitter.com/iUCm2CXhub

Attorney-General Vickie Chapman, who gave permission for the exhumation, said the forensics team was well equipped to handle the challenging task.

The Somerton man was first found by passers-by who noticed him slumped against a seawall. The cause of death remains unknown and many theories have been advanced over his identity, ranging from a jilted lover to a Cold War spy.

The Trump Organisation inquiry is now a criminal matter.

The New York attorney general's office says it has opened a criminal investigation into former President Donald Trump's company, increasing the legal risk for Trump and his family.

The latest announcement marked another escalation of the legal jeopardy Trump faces four months after leaving office, taking to three the number of known criminal investigations of the former Republican president.

The New York attorney general’s office says it is conducting a criminal investigation into former President Donald Trump’s business empire, expanding what had previously been a civil probe. A Trump lawyer did not immediately reply to a request for comment. https://t.co/GeT1KiJVid

"We have informed the Trump Organisation that our investigation into the organisation is no longer purely civil in nature," Fabien Levy, a spokesman for the attorney general's office, said in a statement.

"We are now actively investigating the Trump Organisation in a criminal capacity, along with the Manhattan DA," he said.

Trump has said that the investigation overseen by James, a Democrat, is politically motivated.

James has been investigating whether the Trump Organisation inflated the values of some properties to obtain better loans, and lowered their values to obtain property tax breaks.

In February, prosecutors in Fulton County, Georgia, opened a criminal investigation into Trump's attempts to influence the state's 2020 election results, after he was recorded in a January 2 phone call pressuring Georgia's secretary of state to overturn the outcome of voting based on unfounded claims of tampering.

Third Australian dies in India as Morrison declares: "It's a dangerous place."

A third Australian, Sunil Khanna, 51, has died from COVID-19 in India while caring for his elderly parents.

The Sydney man died in hospital in New Delhi late last month a few days after testing positive to the virus, with the Sydney Morning Herald confirming that both the man's brother and mother also died from coronavirus.

The man's brother is begging the Australian government to allow his father, now alone in the country, to be allowed into the country.

Breaking: Before his death, Sunil Khanna, 51, formerly from Sydney’s west, had been in New Delhi caring for his elderly parents, who are not Australian citizens. https://t.co/fz2xhdCDr2

"It's terrible what has happened... and it's a tragedy when we lose an Australian anywhere, and sadly that happens all around the world when people are in dangerous places.

"So I feel for the family, but it is not a safe place. We are trying to bring people back safely, but equally we've got to do it in a way which doesn't put at risk everything that has been achieved here in Australia."

The India travel ban lifted on Saturday and about 70 people have since returned to Australia, but there are still almost 10,000 people desperate to come back.

Israel to press on despite US urgings.

Israeli Prime Minister Benjamin Netanyahu has vowed to press on with operations against Gaza's ruling Hamas militants after US President Joe Biden urged him to seek a "de-escalation" in the 10-day conflict.

An Egyptian security source said the two sides had agreed in principle to a ceasefire after help from mediators although details were still being negotiated in secret amid public denials of a deal to prevent it from collapsing.

French Foreign Minister Jean-Yves Le Drian said on Wednesday he was hopeful a UN resolution calling for a ceasefire between Israel and Palestinians would pass at the Security Council and that discussions were being held to persuade the US.

Israeli Prime Minister Benjamin Netanyahu said he would continue military strikes in Gaza ‘until its objective is achieved’ after U.S. President Joe Biden called on him to de-escalate the violence https://t.co/VWGzU9QXKV pic.twitter.com/vHz6ypQsFZ

Le Drian told a parliamentary committee there was a chance of success but added: "It's not done yet."

Germany's Foreign Minister Heiko Maas confirmed that he will make a one-day trip to Israel and the West Bank on Thursday for talks with senior Israeli and Palestinian officials.

Palestinian medical officials said that since fighting began on May 10, 227 people had been killed in aerial bombardments that have destroyed roads, buildings and other infrastructure and worsened the already dire humanitarian situation in Gaza.

Israeli authorities put the death toll at 12 in Israel, where repeated rocket attacks have caused panic and sent people rushing into shelters.

Sexual assault charges against ex-MasterChef contestant Ben Ungermann are set to be dropped, after a teenager alleged she "felt his skin on my skin" and "shrunk into a ball".

Ungermann, 37, was charged with three counts of sexually touching a 16-year-old girl in Melbourne without her consent on February 23, 2020.

Melbourne Magistrates Court was on Wednesday told those charges would be withdrawn and replaced with one count of common law assault.

The girl told police she cried after the alleged incident and asked her boyfriend to call her immediately.

MasterChef contestant Ben Ungermann set to have sex assault charges against him dropped. The case is expected to resolve this week on one count of common law assault. Ungermann will fly to Melb to front court on Friday @theheraldsun https://t.co/Ye7goPymop

"I felt his skin on my skin and I shrunk into a ball," the girl said in an interview played to court.

"I was in shock at that point. I started crying and texted (her partner), saying 'call me right now'."

Ungermann's barrister Abbie Roodenburg said she would apply to have the 37-year-old placed on a diversion for the common law assault charge. This would allow him to avoid a conviction.

Ms Roodenburg earlier sought a permanent stay of proceedings, which would have halted the case against Ungermann. The lawyer argued the girl had been "coached" by police while giving evidence.

Magistrate Mia Stylianou said the claims about coaching were "far from ideal", but refused to throw out Ungermann's case altogether. He is due to reappear in court on Friday for the diversion application.

NSW has acquired what the government calls "one of the world's strongest mice-killing chemicals" to combat the rodents which are causing catastrophic damage in regional areas.

Farmers and people in regional towns have been struggling since last year with a mouse plague that has ruined crops, damaged tonnes of stored hay and grain, infiltrated homes and tank water, and caused millions of dollars of damage.

There are concerns this morning the mouse plague wreaking havoc across NSW could soon arrive in Sydney - with reports the rodents have already travelled into the city in trucks carrying food. #9News pic.twitter.com/FGdgu86VbY

The NSW government said on Thursday it had secured 5,000 litres of the anti-coagulant bromadiolone - enough to treat about 95 tonnes of grain - and would provide it free of charge once federal authorities had approved its use.

The poison still has to be approved for use by the Australian Pesticides and Veterinary Medicines Authority to bail corp perimeters. Some experts have expressed concerns over the potent chemical, which could also inadvertently kill native animals and domestic pets.

The baby, the first for Beatrice, the eldest daughter of Prince Andrew and Sarah, Duchess of York, and her property developer husband, is due to be born this northern autumn.

Her Royal Highness Princess Beatrice and Mr Edoardo Mapelli Mozzi are very pleased to announce that they are expecting a baby in autumn of this year.

The Queen has been informed and both families are delighted with the news.

📸 The couple on their wedding day in July 2020. pic.twitter.com/oCHZLBa8oT

"The Queen has been informed and both families are delighted with the news," the Palace said in a statement on Wednesday.

The princess, the ninth-in-line to the throne, and her husband wed at Windsor Castle in July in a scaled-down private ceremony that took place without the usual pomp and fanfare that royal weddings usually attract because of COVID-19 restrictions.

- Global stocks have slipped and cryptocurrencies have sunk as a threat of unwanted inflation had investors shy away from assets seen as vulnerable to any removal of monetary stimulus.

- Researchers will try to prove the geographical origin of Christopher Columbus, who most historians believe was born in Genoa in 1451.

Reply
Upvote
Beatrice’s big royal wedding was over the moment her father’s interview went to air. Covid was kind of a blessing, it made the family disgrace less obvious.

This is celebrity news - doesn't belong with current affairs.

rodeen a month ago