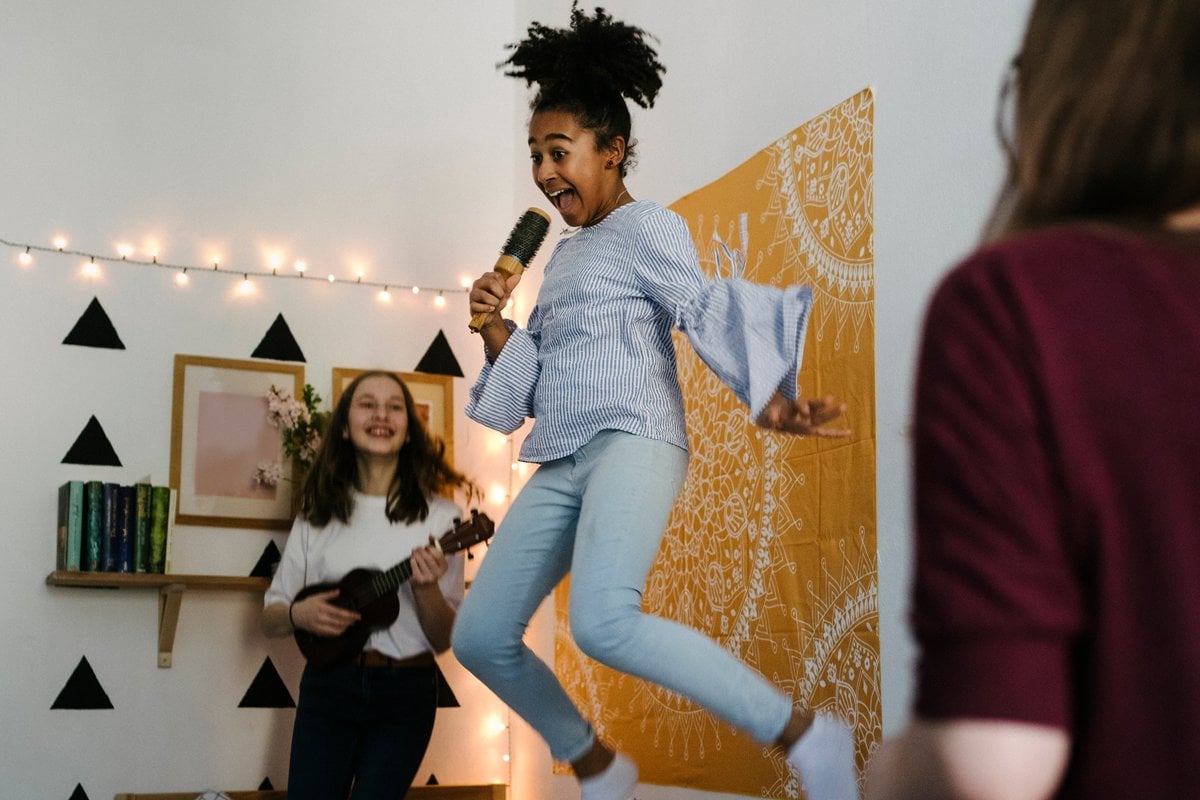 Some of my favourite childhood memories come from sleepovers with friends. From midnight feasts to late night chats and scary movies, it was always a lot of fun.

But as a parent of two boys aged 11 and almost five, sleepovers are not nearly as fun anymore.

When our eldest turned nine, we decided he could go on occasional weekend sleepovers with friends as long as we knew the host family well. We have also hosted a handful of sleepovers at home as a special treat, but thanks to COVID, there haven't been many recently.

Our sleepover rules include limiting the number of friends to just two or three. We also ask that everyone is in bed by about 10.30pm with devices left in the kitchen. We're pretty flexible with snacks and treats, but I'm not very tolerant of noise after bedtime!

To find out what other parents think about sleepover rules, we reached out to our Mamamia community.

Here's what 12 other mums had to say.

"Once I go upstairs to bed, they are only allowed to watch one movie. Once the movie finishes, the TV goes off. They can chat quietly for a bit afterwards but no more tech.

"We allow snacks but I don't have fizzy drinks in the house. The sleepover happens downstairs in the living room. Once or twice I've had to go down to ask them to quieten down.

"There are usually three to four kids at the sleepovers (including mine). Prior to the sleepover, I usually take them all to the park to tire them out a bit and give them something else to do other than gaming!" - Clare.

2. 'We have whole family sleepovers.'

"We’ve established a tradition of whole family sleepovers with another family and it works so well. Every couple of months, we exchange the hosting. The kids aged between eight and three have a brilliant time and enjoy sharing a room, playing together late, and waking up to play again.

"Meanwhile, us adults get to enjoy a special meal and some great wine. No one has to be a designated driver, and it is a relaxed mini weekend break for both families with little cost. As for solo sleepovers, we only do them with our closest friends and only from about age nine to 10." - Leila.

"I didn’t start letting my kids have sleepovers with their friends until aged eight. I needed them to be confident to speak up if they felt uncomfortable and needed to come home. I also didn't let them go to their friend's place if I didn’t know the parents well.

"My kids prefer having sleepovers at ours and that is fine with me. My son’s last sleepover had no restrictions - screens were fine - but the rule was not to wake anyone else in the house. I was woken up at 4am and screamed at them all to go the f*ck to sleep. There were no dramas after that!" - Kristyn.

"I wasn’t in a hurry for my kids to have a sleepover, but they are so desperate to! My 10-year-old had his first one at age nine with a long-term friend.

"At my house, they are often asleep by 10pm. They normally go to bed about 8.30pm watching a movie.

"I generally feed them our regular home prepared food but add a few treats in too. I think it’s all freer in terms of food and bed times at friends' houses, but that’s okay!

"I don’t like to have sleepovers too often as the kids get exhausted and weekends are also about resting after a busy school week and family time." - Briony.

"My daughter is six years old, and it's a hard no for as long as possible. Except for grandparents.

"Even if you know someone, you never really know them. However, she hasn't really asked too much nor had any social pressure yet so we will keep revisiting the rule." - Sally.

Watch: This mum's TikTok featuring her 'unpopular opinion' about not having sleepovers went viral. Post continues below.

6. 'We are wary to send them to other people's houses.'

"We’ve let our kids aged four and seven have one sleepover at our house. We are happy for them to have as many sleepovers at our house as they like, but we are wary to send them to other people's houses yet.

"I know it’s not fair and I feel awful as we had millions of sleepovers when we were kids. I’ll obviously have to rethink it in the future but it’s working well now." - Linda.

"I was never allowed to go to sleepovers as a kid, and I have never allowed my daughter to go to anyone’s house that I didn’t know very well. But never say never. She’s about to turn 14 years old and I have let her go to a few more people’s houses. She has a phone, and she has five or six very responsible friends that I trust with her so I feel like it’s mostly okay.

"As far as when the sleepovers are at my house, I don’t give them a bedtime as long as they’re not bothering me. Honestly, it’s good to have them at your house. I just don’t get too involved. I let them fend for themselves." - Katie.

"My nine-year-old daughter has been having sleepovers for a few years, but only with two kids. Not because she's not allowed to, but I'm finding other parents aren't ready yet or haven't been ready yet.

"I don't have many rules; I find the girls just play among themselves and I give them snacks and lights are out at about 10.30pm but they can chat until they fall asleep. My lights out curfew will ease up the older she gets, but cranky and tired nine-year-old girls don't play nicely the next day! I find my daughter is pretty well adjusted to sleeping over at other people's homes as she has a split/blended family." - Leah.

Listen: On Mamamia Out Loud, Mia, Holly and Jessie discuss whether kids' parties are the new weddings. Post continues below.

"My eldest is seven years old and has been invited to a friends' place several times for a sleepover but we are very reluctant. We compromised and let him have a 'late over' instead and collected him around 9.30pm. The other boys, aged between seven and nine, were on screens, eating junk food, and running around until well after midnight so I'm glad we collected him earlier. The day after he is always so tired and grumpy. It's just not worth it." - Kylie.

"I’m pretty relaxed if I know the parents. My kids are now aged 15, 12, and almost eight and they generally only have sleepovers on a rotating basis with a couple of friends each.

"My kids have all been fine with school camps and stuff, so that's something to keep in mind if you’re reluctant to allow sleepovers since they may not cope with that sort of thing.

"Also, I don’t set rules for the other parents, but I have rules at mine, like the type of movies they can watch. I think too that you have to know your kid and there’s no generic rule of thumb. Some kids have slept at mine from a young age and have been challenging (e.g. refusing to sleep or missing mum) and others are extremely mature and want to stay the week!" - Natasha.

"My three kids now aged 23, 15 and 11 have had sleepovers with family and friends from very early ages. Most of their friends' parents are our friends, so we are very comfortable with it.

"We are a revolving door for our two youngest kids and their mates on weekends. We always have their mates (it's usually their group of four friends) staying over at least one night on the weekend.

"They usually camp out in our shed (man cave). We don't enforce many rules but our kids know our expectations of them and their behaviour and so do their friends." Sally C.

"My son had his first sleepover at a friend's house about a year ago when he had just turned age four. He has also had friends sleep over at ours.

"I’m not too concerned about what goes on regarding bed times as I’m pretty loose with rules. I think it should be fun for them (otherwise, what’s the point?) so I’m all for letting them giggle and chat until they fall asleep.

"If they are tired the next day, I figure they’ll catch up on sleep the following night in their own beds." - Miriam.

Do you have rules about sleepovers for your kids? Tell us in the comments below, or join the conversation in our Mamamia Parents Facebook group.