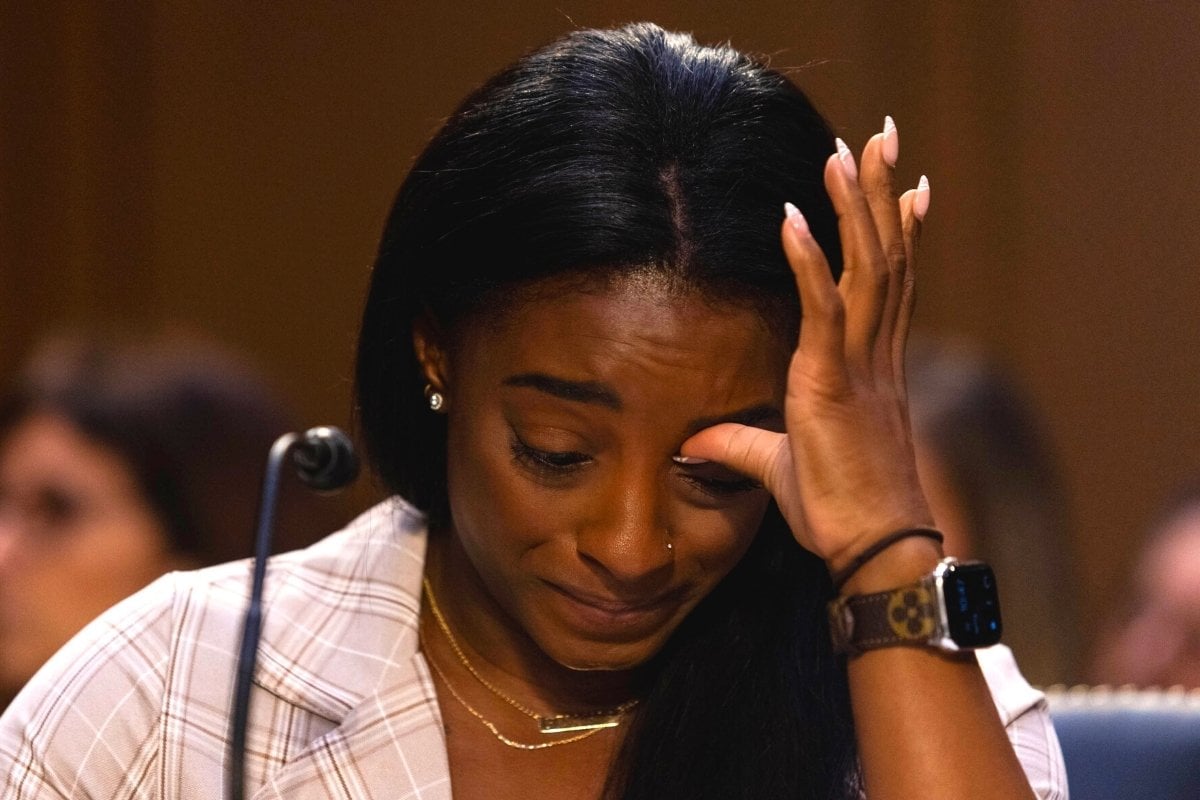 It was the last place US Olympic gymnast Simone Biles wanted to be on Wednesday. Sitting in a room full of Senators, law enforcement officials and media, talking about the fallout of the sexual abuse she suffered at the hands of former USA Gymnastics doctor Larry Nassar.

But the four-time Olympic gold medallist delivered her statement to the Senate Judiciary Committee for a simple reason.

"I sit before you today to raise my voice so that no little girl must endure what I, the athletes at this table, and the countless others who needlessly suffered under Nassar’s guise of medical treatment," she said.

"We suffered and continue to suffer because no one at the FBI, [USA Gymnastics] or the [United States Olympic and Paralympic Committee] did what was necessary to protect us. We have been failed, and we deserve answers. Nassar is where he belongs, but those who enabled him deserve to be held accountable."

More than 200 women and girls, including several top-level gymnasts, came forward with allegations of sexual abuse against Larry Nassar stretching back to the 1990s. He ultimately pleaded guilty to 10 counts of criminal sexual conduct, several of which involved survivors under the age of 13.

He is now serving up to 175 years behind bars.

Listen to Mia Freedman's interview with Aly Raisman - a six-time Olympic medallist who was one of the women and girls abused by Larry Nassar. Post continues after audio.

Biles is among the gymnasts who was abused by Nassar during his tenure as the national gymnastics team's doctor. But she argued on Wednesday that he is not the only one to blame.

"How much is a little girl worth?": Biles' powerful statement.

The Senate Judiciary Committee was convened on the back of a July report into the FBI's investigation into Nassar.

The report, by the Justice Department's inspector general, concluded that "fundamental errors" by bureau agents allowed Nassar's abuse to continue for several more months after the case was first opened.

Among its key findings were that the FBI had been slow to respond to allegations, that agents had initially only interviewed one of the women who had come forward (Olympic medallist McKayla Maroney), and that when agents were confronted about flaws in their investigation, they lied to cover them up.

In delivering her statement to the committee, Biles also highlighted "failures" by USA Gymnastics and the United States Olympic and Paralympic Committee in protecting her and other athletes from abuse, and delaying telling her about the investigation.

In emotional testimony before a Senate committee, star US gymnast Simone Biles blames "an entire system that enabled and perpetuated" sex abuse.

"The organizations created by Congress to oversee and protect me as an athlete... failed to do their jobs." https://t.co/4XH2uT576a pic.twitter.com/IVcyhpeswv

"To be clear, I blame Larry Nassar, and I also blame an entire system that enabled and perpetuated his abuse," she said.

"These are the very entities entrusted with the protection of our sport and our athletes, and yet it feels like questions of responsibility and organisational failures remain unanswered. As you pursue the answers to those questions, I ask that your work be guided by the same question that Rachel Denhollander and many others have asked: 'How Much Is a Little Girl Worth?'

"I am a strong individual and I will persevere, but I never should have been left alone to suffer the abuse of Larry Nassar. And the only reason I did, was because of the failures that lie at the heart of the abuse that you are now asked to investigate."

Biles' former teammates and Nassar survivors Aly Raisman and McKayla Maroney also delivered statements, in which they were scathing of the FBI's handling of their allegations. 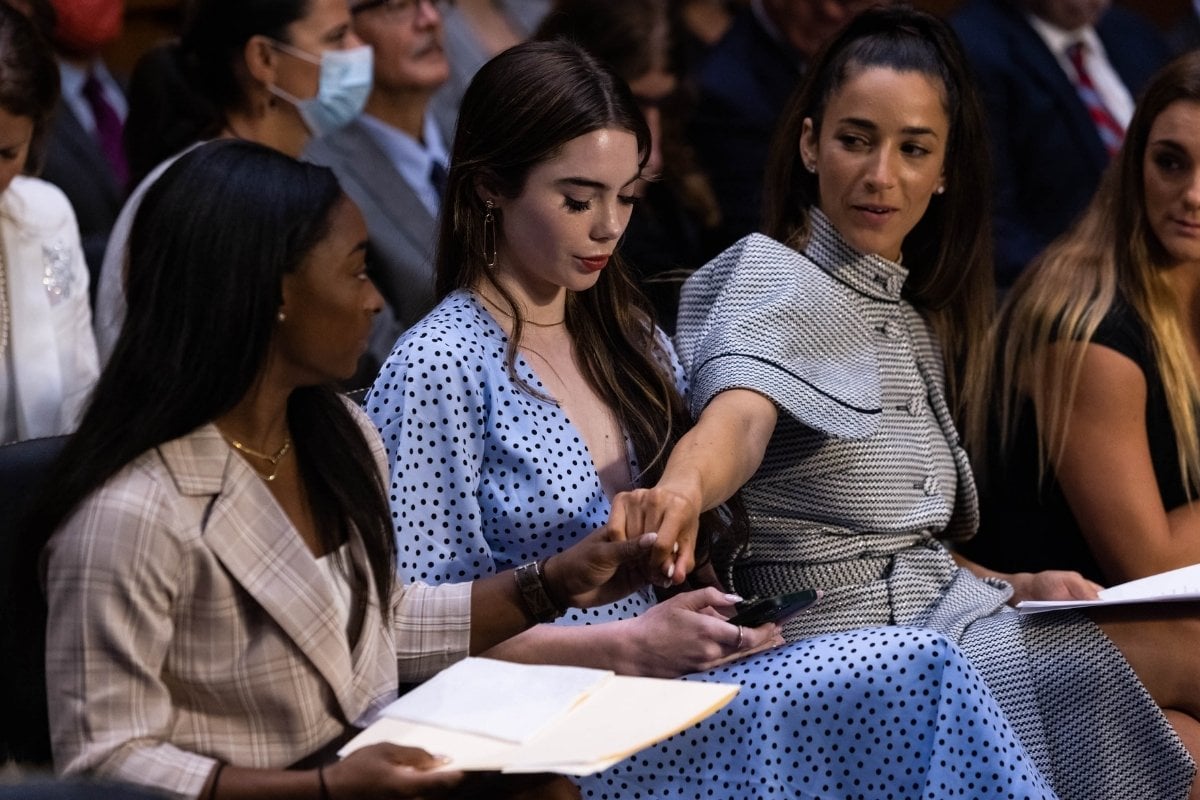 Biles, Maroney and Raisman were among the witnesses to testify at the committee hearing on Wednesday. Image: Getty

Raisman, who served as captain of the 2012 and 2016 US Olympic gymnastics teams, said, "Over the past few years, it has become painfully clear how a survivor's healing is affected by the handling of their abuse, and it disgusts me that we are still fighting for the most basic answers and accountability over six years later."

Maroney, a gold medallist from the London 2012 Olympic Games, described the experience of being interviewed by the FBI. She claimed that after spending hours detailing the abuse to an agent over the phone, he responded: "Is that all?"

“I was so shocked at the agent's silence and disregard for my trauma," she said.

"I hadn't even told my own mother about these facts, and it was the most uncomfortable conversation I had ever had in my life, but I thought as uncomfortable as it was, I was making a difference, and hopefully protecting others from the same abuse. I waited, and I waited and heard nothing. They betrayed me, they betrayed my trust, and they sat idly by, as dozens of girls and women continued to be molested by Larry Nassar.

"What is the point of reporting abuse if our own FBI agents are going to take it upon themselves to bury that report in a drawer?"

Biles hopes that, by the time it's closed, it will send a firm message.

"If you allow a predator to harm children, the consequences will be swift and severe," she said. "Enough is enough."

If you have experienced sexual assault and need to speak to someone, support is available. Please call 1800 RESPECT on 1800 737 732.