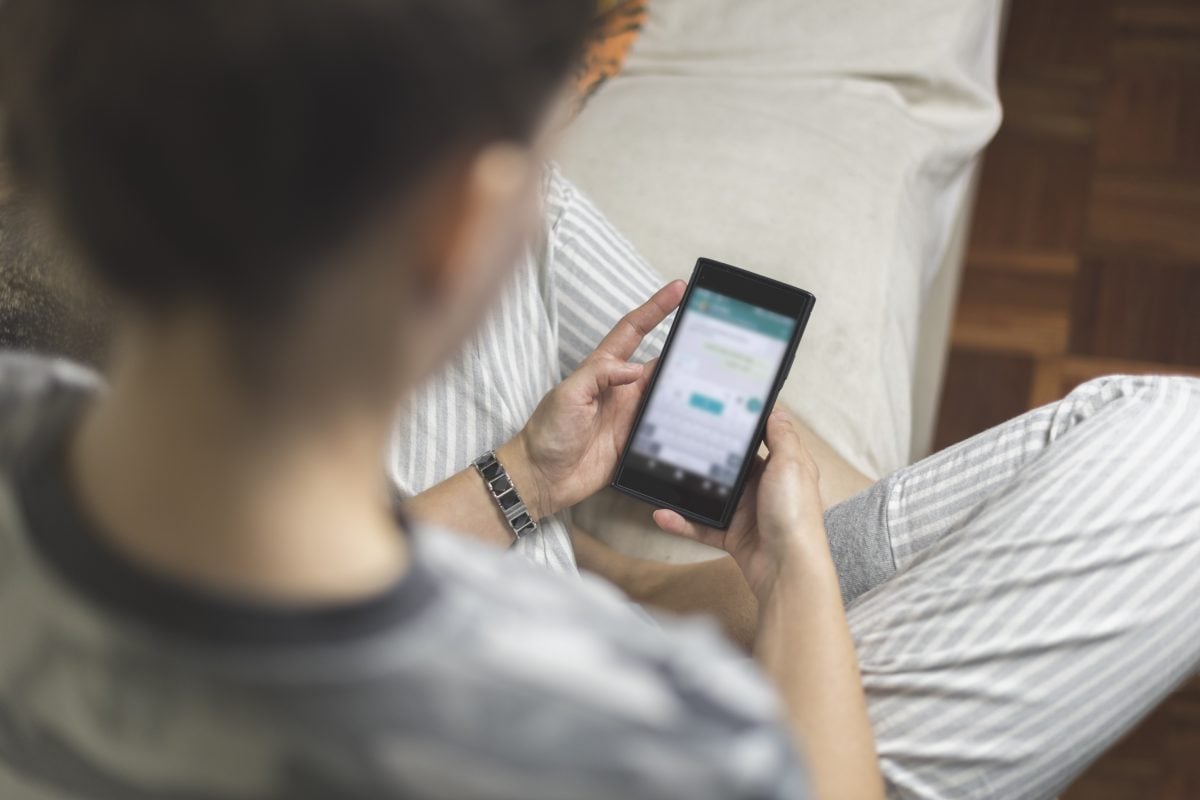 Sometimes a break up is amicable… and then sometimes the whole relationship gets shot down in an explosive ball of flames. Like when cheating partners are involved.

As if finding out your loved one is doing the dirty on you wasn’t bad enough, these poor people made the heartbreaking discovery under the most horrific circumstances. We’re talking, “you couldn’t make this stuff up if you tried because no one would believe you” territory.

If you’re one of those people who believes in fairy tales and happily ever after then turn away now. Stop reading. Because these stories, compiled from a viral Reddit thread, will make you want to give up on modern dating forever.

Here are a few of the very worst ways people found out their partner was cheating:

1. “I got a Facebook message from some lady telling me that my fiancée was a home wrecker. Apparently he was sleeping with this woman’s husband, and she was divorcing him because of it. Fortunately this happened the weekend before our wedding, so I dodged a bullet.”

2. “Someone anonymously sent me video footage of my now-ex with someone he’d said I ‘did not need to worry about’. That shit leaves you devastated.”

3. “We’d been dating for two years until one day, out of the blue she says she’s not happy and breaks up with me. It sucked but I figured it was for the best if she wasn’t happy. About a week later I saw her at the bar with some guy who she sheepishly admitted she was on a date with. Later that night I was standing next to him ordering drinks and he apologised for the awkwardness. “Yeah,” I said. “It’s just weird since we’ve only been broken up for a few days and she’s already dating.” He pauses “…..A few days? She and I have been seeing each other for three months.” We stared at each other for second. And then my ex comes running up to pull him away from me. He shrugged her off and told her to go fuck herself and left the bar.”

4. “I found out from her iMessage linked to her computer. I was on her laptop buying stuff off Amazon and she was sitting on the couch, feet from me, texting her ex. He was trying to get her to send him nudes and they were reminiscing about previous encounters. He was bragging about how he made her “leg shake” all the while I was watching the conversation in real time, right next to her.”

5. "My wife tried calling and didn’t hang up once it went to voicemail. She accidentally left me a two-hour message. It consisted of her and her boyfriend talking shit about me and how much happier she was with him. At the time I was home with our kids and I thought she was 1800 miles away by her dying father’s side."

6. "I got an anonymous email. My boyfriend of six years was starring in a musical and there was one girl in the cast who always made me uncomfortable, but I was told I had nothing to worry about over and over. One night while I was interstate, an email pinged… it said 'Word around town is your man is getting awfully close to one of his co-stars… I wouldn’t be surprised if they’ve already taken it to the next level…' I confronted him and he denied it and told me not to come home, and to just enjoy my holiday. I later found out this was because he was taking the girl away on a dirty weekend. To this day I am convinced the email was sent by was the other girl, emailing me in the hopes that I would dump him so she could have him all to herself. Unfortunately (for both of us as it turns out) I am a stubborn bitch who doesn’t like to let go."

7. "I counted the pictures. Before everyone had cameras on their phones, you had photos developed at labs. She brought home pictures of her vacation to see her “old high-school friend” in Vegas, but there was something missing. See, back in the day the rolls of film were made up of exposures of 12, 24, 36 pics, depending on the film you bought. I went through the photos and it didn’t add up. Literally. The 24-exposure roll only had 18 pictures. Eventually I found the remaining photos… her and the new boyfriend looking happy."

8. "I’d heard my uni boyfriend was cheating on me with a girl from our Psych 101 class, so I went to his house to confront him. My best friend answered the door in just his shirt and her panties."

9. "He begged me to take him back after he’d cheated and we’d spent a few weeks trying to put the pieces back together. He suggested we go on a romantic date: he’d take me to drinks, to dinner and we’d see whatever movie I wanted. I had slowly started to open up and trust him again. Then I opened his laptop to buy movie tickets… You see, he’d sworn black and blue that even though he’d been unfaithful, she had never been in our house. But there was her name, in black and white, signed into her cinema loyalty account on his computer. He still denied it until I showed him the evidence. Of course, this was somehow all my fault for being overbearing."

10. "He told me he didn’t have a Facebook account, but one day I saw the app on his phone. So I did a bit of sleuthing and found out: a) His name wasn’t Sam, that was the dog’s name. b) He had a wife, and the 'family vacation' he had gone on a few months back was actually his fucking wedding; and c) I was definitely the side chick. The confrontation was… unpleasant. We’d been together for almost two years, and looking back from where I am now I realise he’d always been a manipulative, abusive dick but I didn’t want to see it. I eventually left him, but some days I’m not sure I’m over him. That relationship broke me."

11. "His Uber receipts didn’t match with the activities he said he was doing. He said he went to see movie but his receipt said that he went check-in into a hotel. I told him I know he cheated on me but he doesn’t know how until today how I know."

12. "I found pictures of his baby shower on Facebook… with a woman who was not me."

13. "It wasn’t me that was cheated on, but I found out a guy I was sleeping with was cheating on his wife when he added me on Facebook. He was even expecting a fucking child. This was five years ago and his kid is now a student at the school where I teach. It’s awkward."

14. "I was married with a four-year-old and had just had our second baby. I went to the doctors in to get an IUD placed and after routine tests I get told the bombshell: I apparently have chlamydia. Now, I’d had an STD test when I first found out I was pregnant so I know I didn’t have chlamydia then. I call my best friend who pretty much forced me to take the test again. Then I went home to confront my husband. He denied it and denied it until he was forced into a corner with the evidence (hello positive STD test!) I took the kids and went to my parents’. Weeks later the doctor’s office called: my second test was negative. They must have mixed up the samples in the lab the first time. My husband’s subsequent test was also negative. Which basically means I found out my husband was cheating on me because the lab accidentally messed up my results. And I’ve been thanking that clumsy lab tech ever since."

15. "We’d lived together for 18 months, talked about marriage and kids, and had goals and bank accounts together. Then I got a call from a woman who’d found his phone. Turns out she was his fiancee and partner of eight years and had located his phone under the seat of their car. She’d had a gut feeling something was up and looked in his contacts list, where just recently I’d changed my name to “Love You”. She called, and long story short we became BFFs. Loaded up everything we had of his in our homes, walked into his work together, dropped the garbage bags full of shit off and walked out together. Best feeling ever!"

16. "I found another girl’s toenail in our bed. Yep you read that right, a toenail. Also the same guy got so drunk one night that he pulled up Tinder while sitting right next to me in bed."

17. "The parents of the girl he was cheating with showed up to his apartment expecting to see their daughter. I’m still not sure which of us was the other woman."

18. "My cheating ex and I were trying to work things out when we turned up to a party and there was the other woman… or I should say girl as she was 19. He was holding my hand to reassure me, as I am sure he could tell my stomach had dropped out of my ass at seeing her. She sat across the table from us and pretty soon she picked up her phone and started texting. And then his phone vibrates. He picks it up off the table and then proceeds to move his phone under the table where he thinks I can’t see it and begin texting. Her phone vibrates and I see her smile, her eyes flickering ever so slightly to him. I slam both hands down on the table and yell at both of them “I’m right fucking here, you know!” and storm out, much to everyone’s confusion. To this day I wish I’d had the strength to keep my cool and call them out properly in front of our friends."

19. "He died and the other woman showed up to the funeral and told me. At his fucking funeral. Then another girl he’d been talking to on the side posted how she regretted she’d never be able to go on the date they’d been talking about for so long."

20. "My then-boyfriend went to France for a vacation and had made arrangements with his mum to pick him up on his return. I decided to surprise him at the airport and go with her. When he walked out of the terminal he was holding hands with some woman, and before he saw me, he leaned in and gave her a kiss. Needless to say, the four hours home in the car with just me, my ex and his mim were torture.

21. "While my ex and I were still together, he made a Match.com page and used pictures that I was in with him for his profile. A friend of a friend saw his page and contacted to see if we were still dating. Long story short, I wasted two years on a loser who couldn’t even crop a photo."

22. "I heard my roommate and my girlfriend having sex upstairs while I was downstairs with the most crippling depression of my life. I didn’t even have the strength to confront them because I was so depressed. On the upside, they’re now miserable in an open relationship and I am happily married with a gorgeous child."

23. "Um, I knew when two carloads of girls showed up at my house with knives. My boyfriend had been cheating on me for years with a girl from his job. He’d apparently broken things off with her and she wasn’t taking no for a answer. That was a fucking scary night."