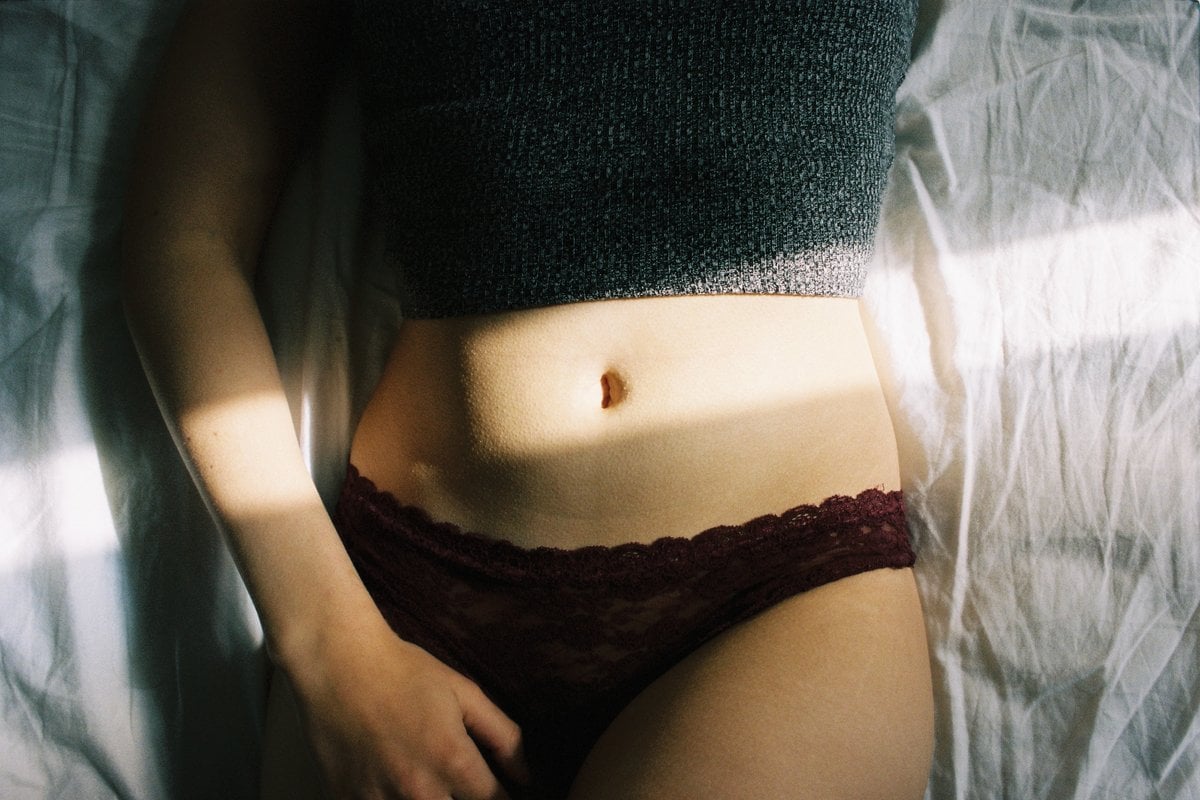 Wanna hear a fun fact? Course you do. Get this: Your uterus usually falls into one of two categories based on its position: an anteverted uterus and a retroverted uterus.

Did you know this? Or did we all just happened to miss that biology class?

Watch: How well do you know your lady garden? Post continues below.

While the former is the most common (around 80 per cent of people have an anterverted uterus), a retroverted or 'tilted' uterus is not exactly an uncommon thing.

So, how do you know what position your uterus is? And why do I need to know this?

Well, it's not really something that you HAVE to know - cause the majority of women with a tilted uterus will not have problems. But a titled uterus can be associated with some specific symptoms, and some of these can become pretty bothersome (lookin' at you painful sex).

To give you a rundown, we've pulled together some of the most common signs of a tilted uterus and what this might mean for you. If any of these sound familiar, it's obviously best to check in with a gynecologist, mmmkay?

Alrighty, let's get to it.

Hold up. What exactly is a tilted uterus?

Oh! Yes. Good call. It's probably best to touch on what a titled uterus is first, huh?

Okay, here we go. Also known as a retroverted or tipped uterus, a tilted uterus usually tips backward at the cervix instead of forward.

While it might sound 10/10 scary (um... pls explain why are my organs tilted), it's actually pretty common - so don't be alarmed.

Just to give you an idea, though, around one in five women (about 20 per cent) have a uterus that tilts backwards at the cervix towards the spine.

Listen: Mia Freedman speaks to her cousin Syl, about an endometriosis diagnosis that turned her into a warrior for other women. Post continues after audio.

And it's typically genetic, so if you're that one in five, there's a good chance that your mother or grandmother also had a retroverted uterus!

Sometimes, a uterus may also be tilted due to scar tissue due to certain medical conditions like fibroids or endometriosis.

How do you know if you have a tilted uterus?

Okay, here's the thing. As we said earlier (umm... are you skimming again? Gah) a lot of people will probably never notice they have a titled uterus and tbh - it's usually something you don't have to worry about.

However, while some women with a retroverted uterus might experience little to no symptoms, there are others who experience symptoms including painful sex and period issues.

The only surefire way to know whether you have a retroverted uterus is to obviously have a pelvic exam or an abdominal ultrasound.

But! If you feel a little uncomfortable in any of the below situations, it could be an indicator that you have a tilted uterus.

If you have a tilted uterus, you might find that certain heterosexual sex positions feel painful or super intense because of the angle of the P in V.

This is *especially* true when you're having a crack on top - cause the penis tends to hit the back of your uterus (unlike the ol' reverse cowgirl, where it hits towards the front).

Deeper penetration might also cause some annoying issues in the pain department (especially with positions from behind).

If this sounds familiar, hit up your doctor and ask for ways to make sex more comfortable - because sex shouldn't feel like this, sweet babes.

2. You have trouble putting in tampons or menstrual cups.

Is this you? If you've always struggled with tampons and can never seem to get them in comfortably, this could be a sign your uterus is tilted backwards (it could also be due to vaginismus - which is a super common issue that affects one in three women).

Cause tampons should be pretty easy to use (once you get the hang of it, obvs), so if you find that it's really difficult to try to slide it in or it feels like it just doesn't sit in properly, we recommend chatting with a doctor for advice.

3. You get really bad period pain.

Bad period pain is pretty common, particularly if the retroversion is associated with endometriosis.

Just how bad are we talkin'?

Well, according to Healthline, a recent study measured the degree of flexion in women who had significant pain during periods and found that the more tilted the uterus was, the more painful their periods were.

The researchers believe this may be due to the sharply angled uterus closing off the pathway of blood from the uterus to the cervix. This narrow passage means your body has to work harder (read: contract, cramp and make you feel like s**t) in order to push out the blood.

Many women who have a tilted uterus also tend to feel period aches and cramps in their lower back, rather than their abdomen. The joys.

While this can also happen in women with an anteverted uterus (cause there are a whole heap of unexpected period symptoms no one talks about), it's more common in those who have a fancy tilt.

4. You may have peed yourself a couple of times.

A tilted uterus will put pressure of other surrounding organs, so it's not uncommon for someone to experience pesky issues like incontinence.

There tons of reasons why someone might struggle to hold in their pee or dribble between trips (and sneezes), but a tilted uterus may be one of them.

It probably goes without saying, but this issue really freakin' sucks - it can make you feel really embarrassed and uncomfortable. So if it's something that is happening to you on the reg, go and see someone.

According to Mayo Clinic, kegel exercises might also help prevent or control incontinence - so get amongst them!

5. You're always getting UTIs.

Do you always get UTIs? Like, all the time? It could be to do with a tilted uterus, you know.

However, there are things you can do if this is causing you grief (cause battling constant UTIs is not a thing that is fun) - so we recommend speaking with a professional and suss out your options.

Like we said, if any of these symptoms bother you, you should definitely make an appointment with your doctor and get some relief - because you don't have to just soldier on and not talk about it.

Do you have a tilted uterus? What's your experience? Share with us in the comment section below.