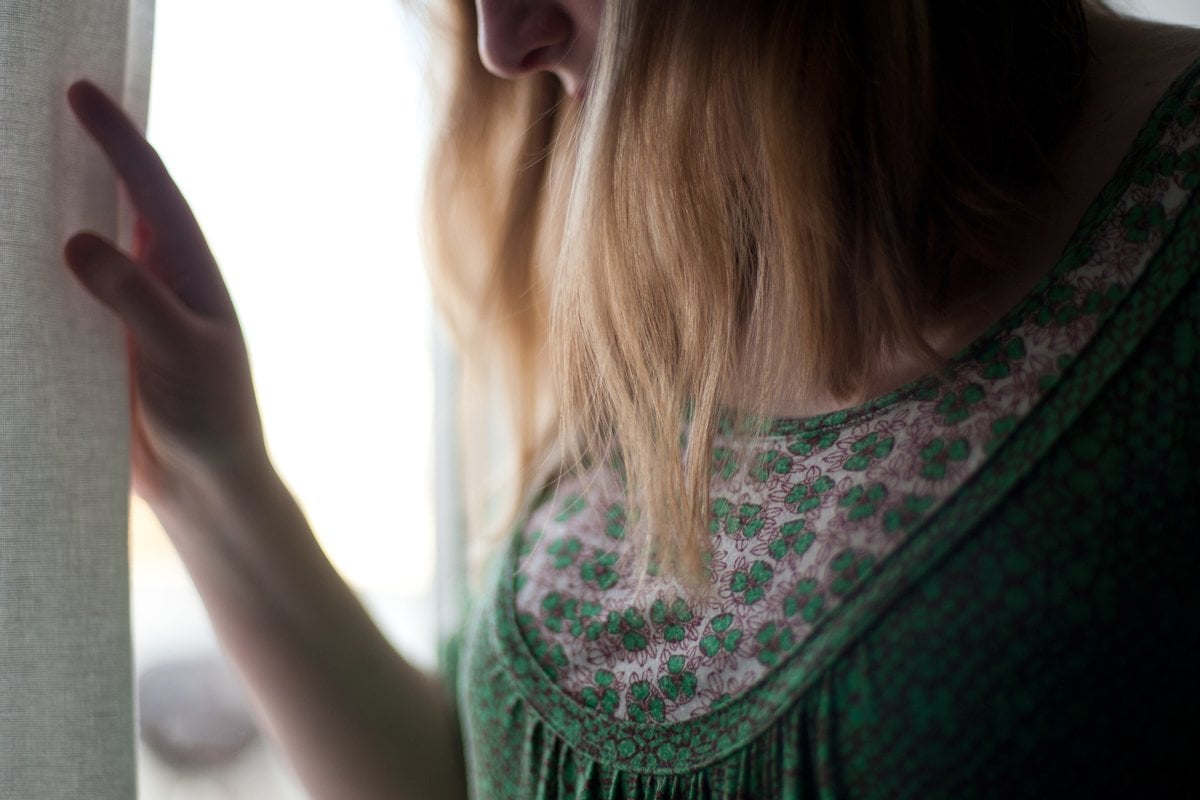 One year, four months and one day ago, I left an abusive relationship. It’s taken a long time for me to admit that, and I’m still too ashamed write about it without the veil on anonymity.

Yet I'm finding myself yearning to do something that will make a difference. Ideally I’d like to one day work with survivors, helping them rebuild their lives.

This article is a starting point, written in the hope that one day I will be brave enough to pursue that goal.

Watch: Women and Violence, The Hidden Numbers. Post continues below.

When I met my ex-husband, I was a very naïve 19-year-old. We were part of the same social circle, and everyone thought he was a great guy.

He pursued me relentlessly, and eventually we started dating. He said he loved me within two weeks of becoming a couple. I now know that this ‘love bombing’ is common in abusive relationships but at the time I was totally swept off my feet.

Within weeks I was covered in bruises from his ‘love bites’.

When I asked him to stop, he blamed me, saying he just wanted me so much. So I wore turtleneck shirts and layers of concealer in an (unsuccessful) attempt to cover the bruises. It didn’t even occur to me that this might not be ok.

When my mum asked if someone had hurt me, I said no and she never brought it up again. No one else said a word; not my friends, not my other family members, not my colleagues. Would I have listened at the time? Probably not, but I might have left sooner than I did.

For many years I was convinced that everything was fine because there was no physical violence.

I gave him everything. He ignored my boundaries, isolated me from my family, told me how to dress, spent large chunks of our money on himself. If I had any concerns, he said I was over-reacting, too clingy, too emotional, blowing things out of proportion, even making things up.

I believed him, because he said he loved me. I didn’t even know what emotional abuse was.

If I said no to sex, he would ask again and again until I said yes just to make him leave me alone.

Sometimes he just didn’t acknowledge my no.

The first time he raped me I thought about leaving him. But I decided it must be my fault for not being a good enough girlfriend, for not screaming, for not fighting harder.

I didn’t understand that it doesn’t matter how loud you say it, no means no.

From the outside it looked like things were great.

We bought a house together, got married, travelled, started a family.

When I developed post-natal depression, he told me not to be silly, that I was fine and should just get on with it. I did eventually see my GP, but by then I was firmly on a downward spiral. I didn’t know that stopping me from seeking medical help was abuse.

I started to think about leaving, I went back to work, tried to save some money to support myself and my baby.

Before I could leave, I fell pregnant unexpectedly.

He was annoyed, it was my fault and he didn’t want another child.

I chose to continue the pregnancy and stay in the marriage. I couldn’t manage two children under two by myself and I didn’t know how much help was available.

I begged him to attend marriage counselling, and he refused, insisting I was making up problems that didn’t exist.

He refused to be part of any decisions regarding our children, and my choices were always wrong.

I felt like the worst wife and worst mother in the entire world. I began to believe that my children were better off without me, that their dad could do a better job on his own. I tried to end my life.

It was at this lowest point, and with a lot of help, that I began to understand that something was really wrong in our relationship.

It took another year before I finally found the courage to leave. When he became violent with one of our children, I simply couldn’t bury my head in the sand any longer.

I thought leaving would be the hard part, but harder still was finally admitting to myself that I was a victim of domestic violence, and that I brought two innocent children into that environment.

Having to hand those children over to my ex-husband, even for just a few hours is excruciating.

There is no evidence that he’s anything less than a loving father, it’s my word against his, and the legal advice I’ve received suggests that he might actually gain more time with the children if I attempt to limit his contact.

I didn’t know the value of keeping records, that could later be used to keep us safe.

I am lucky in that when I asked for help, my family and friends really stepped up.

I will be forever grateful to my parents for letting us stay in their home, helping me to apply for rental properties, and for all their help raising my children; to my brother for coming with me to get the rest of my belongings and helping set up our new home; to my friends who’ve helped with the children and listened to me vent; to the mental health professionals who are working with me towards recovery; to my workplace who have allowed me to take long-term sick leave and helped me to claim on income protection insurance.

I am alive, I am free, and I have two beautiful children who are the light of my life.

Not everyone has access to this kind of support, but there are many services available that can help. A good place to start is the national sexual assault and family violence hotline 1800 RESPECT (1800 737 732).

This article was difficult to write, and (I imagine) difficult to read, but it’s worth it to help bring awareness to the important issue of domestic violence.

If you are feeling unsafe in your relationship, even just a little, listen to your gut and seek support. If you are worried about someone, please speak up, it could make a world of difference to their life.