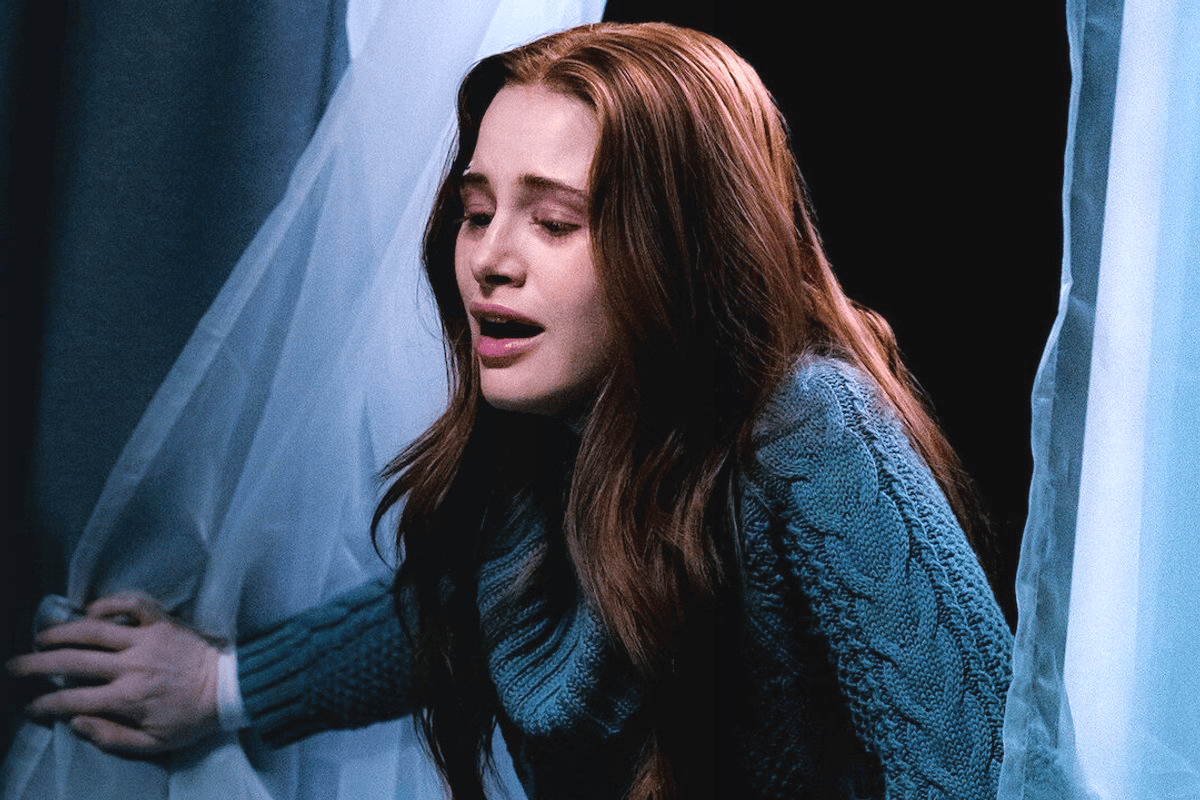 There's something so satisfying about watching a carefully constructed psychological thriller and then looking back over the clues the writer cleverly laid out for you.

Netflix's new psychological thriller, Sightless, follows the story of Ellen Ashland (played by Riverdale's Madelaine Petsch), a former famous violinist who loses her sight when she is brutally attacked in a car park one night. Her attacker is wearing a mask and has long hair but Ellen tells the detective the attacker "felt like a man".

After waking up in the hospital, Ellen talks to her brother on the phone who tells her he has organised an apartment close to the city centre for her to live in, and a carer who specialises in helping people like her who are 'adjusting to their new lifestyle'.

Watch the trailer for Netflix's Sightless. Post continues below.

The next day, Ellen wakes up in her new apartment and meets her new carer Clayton. She has no memory of the trip home from the hospital, which Clayton explains away by saying that the painkillers she's taking would 'kick a linebacker's ass'. This is the first clue that something isn't right, surely if you travelled in the back of a town car from the hospital to your new apartment you would at least have a vague memory of it.

Clayton explains the layout of the apartment to Ellen and shows her the phone and explains that if she dials 11, she'll get the building's security office and if she dials 22, she'll reach his mobile number.

The next day, Clayton brings Ellen a pet budgie in a cage. When she asks him what colour it is, he tells her it's baby blue - the budgie immediately changes colour from green to blue. Another clue - if the budgie could change colour, maybe everything we're seeing is an illusion.

Clayton tells Ellen he became a carer because his mother was sick when he was growing up. He doesn't have to work because he has an inheritance but he sees this as a way of giving back. Ellen tells Clayton that her ex-husband is in prison for fraud and that her attack might be linked to his crimes.

One night Ellen believes there's someone in her apartment so she tries to call the security office but no one answers. Clayton answers straightaway when she dials 22. Another clue.

After a few days, Ellen realises she hears the same alarm go off at 11am every single day. CLUE!

At some point over the next few days, the woman, who is named Lana, knocks on Ellen's door and comes in for tea. She acts strange though, lighting a cigarette when Ellen specifically asks her not to. Ellen touches her face and feels a fresh scar before the woman says 'do not trust anyone' and runs out of the apartment.

Ellen becomes convinced that the man is being physically abusive to Lana. She later has a confrontation with the man when she runs into him in the hall and he chases her back into her apartment.

Clayton confesses that he's developed feelings for Ellen and Ellen says she feels the same way. They start to get closer. 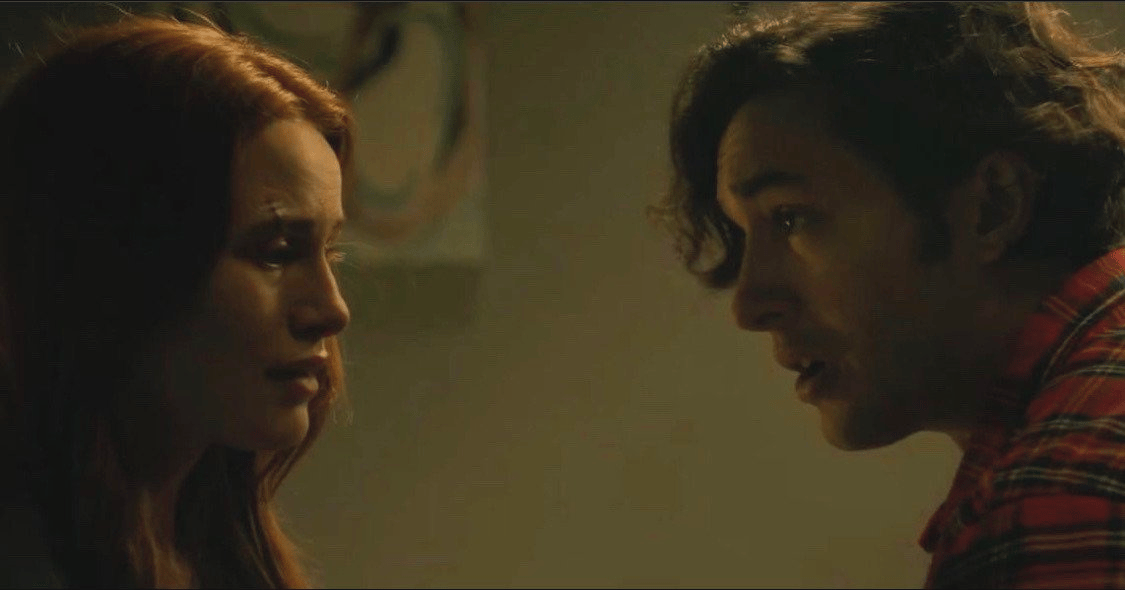 Throughout this whole time, Ellen has been trying to contact her best friend, but she hasn't been picking up or returning her calls. The detective suggests that she may have been the one who attacked her.

Feeling isolated from everyone in her life and believing someone is after her, Ellen decides to end her own life. She dictates a letter to her brother and then climbs up onto the balcony railing and jumps off.

A little while later, Ellen wakes up in a padded room with a speaker attacked to one of the corners. This padded room is what she believed was the outside world. She hears the 11am car alarm go off and climbs back into the "apartment".

Ellen hears Lana in the hallway and asks her to come in the apartment. When she's inside, Ellen turns on the tap and asks Lana what's going on, Lana says "this is all for you" and then runs out of the apartment when her husband comes looking for her.

When Clayton comes over, he tells her this was all a part of her treatment plan and transition back into the real world. When they sit down to eat dinner, Ellen hears Clayton knock on the table twice. That's when she realises everyone she's met since she woke up in the hospital - the nurse, the police detective, the paramedic, the man next door - were all Clayton.

She pretends to drop his drink, hits him on the head with the knife block, and escapes down the hallway into the "apartment" next door which is actually a weird empty storage area where Clayton keeps all his costumes and everything else he needed to pull off this ruse.

LISTEN to the latest episode of The Spill, Mamamia's daily pop culture podcast. Post continues below.

She comes across Lana from next door who is actually Clayton's sister. Lana tells Ellen the only way to escape is through the air-vent.

Clayton eventually tracks her down and tells her that his dad kept him and his sister captive in the basement for three years after their mother died. With nothing to do all day, Clayton would make up characters and listen to Ellen's music through the air vent. He became obsessed with the idea of saving her so devised this plan to blind her, abduct her and hold her captive without her knowledge.

While he's talking, Ellen opens the air vent and finds a vial of the same substance that blinded her. She runs back into her apartment and when Clayton chases her; she spits the substance in his face blinding him.

Ellen and Lana then escape. The movie then flashes forward to six months later when Ellen is about to perform in front of a large crowd. So... a happy ending, of sorts.

OK, so who attacked Ellen in the first place?

It was Clayton in one of his many "characters" and disguises.

But... where are Ellen's friends and family?

Ellen's friends and family had no idea she was missing because she was attacked by Clayton and then taken to Clayton's fake hospital and then to the apartment. No one had any clue where she was or what she was going through.

How involved was the sister? Was she dodgy etc etc

It seems like Lana was pretty damaged from her time in the basement and just reluctantly went along with Clayton's plan. She tried to help Ellen escape as much as she could.

Does Ellen ever get her sight back?

No. But she learns to play music again after she escapes.

You can watch Sightless on Netflix now.