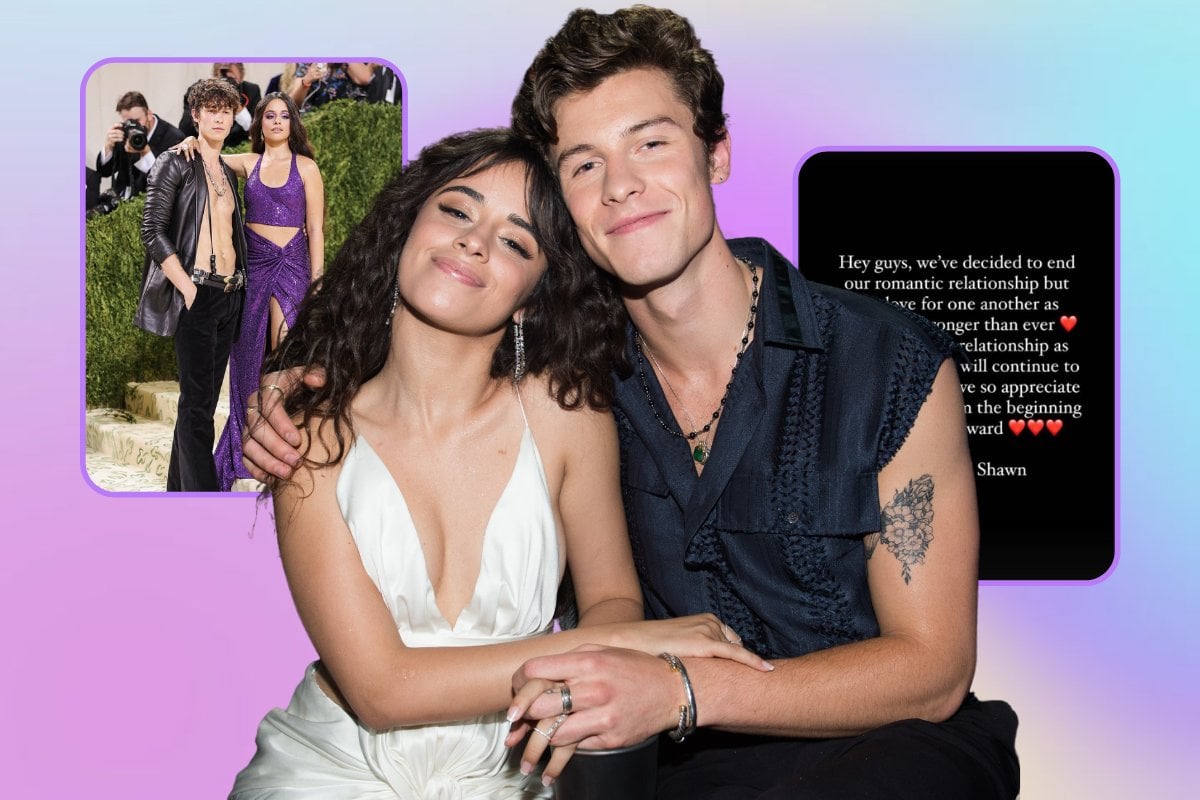 It's been a big week for celebrity break ups.

Supermodel Kaia Gerber and Euphoria actor Jacob Elordi reportedly broke up after a year of dating, and Australian actor Hugh Sheridan and their fiance Kurt Roberts announced their split after being engaged for eight months.

But there was one celebrity split that took place this week that's left people a little shocked; one that people always thought was a publicity stunt but looked like it was lasting the test of time. And that's musicians Camila Cabello and Shawn Mendes.

Watch: How some of your favourite celebrities met. Post continues after video.

Camila Cabello, now 24, and Shawn Mendes, now 23, met back in April 2014 while they were both opening acts for Austin Mahone’s tour.

Speaking to V Magazine in 2019, the musicians reflected on that time together.

"We met on the Austin Mahone tour, and I remember I wanted to hang out with you, but you were always on the tour bus, just learning guitar," the former Fifth Harmony member said.

Mendes replied, "Yeah, that was me. I didn’t talk to anybody. You were the only person that talked to me. Like, you were the only one of everybody on that tour who would say words to me."

The following year in November, the pair dropped their first song together: 'I Know What You Did Last Summer', which sparked dating rumours.

Then in March 2017, Cabello and Mendes posted a video of themselves covering Ed Sheeran’s song 'Kiss Me'.

In June 2019, the musicians dropped their second song together, 'Señorita', which further stirred relationship speculation with the lyrics: "You say we're just friends / But friends don't know the way you taste."

In August 2019, Mendes turned 21 and celebrated with a party, where he was seen kissing Cabello. That same night, Cabello seemingly confirmed their relationship in a celebratory Instagram post.

"Happy birthday to this magic human, I love you," she wrote.

That same month, the couple performed 'Señorita' at the VMAs, and looked pretty close.

It was here when people started speculating that their relationship was a publicity stunt, or a 'showmance'.

The public start of their relationship coincided with the release of their song, which was also nominated for a Grammy.

The couple started posting photos together on social media and were regularly photographed by paparazzi out in public.

But they always denied those rumours.

"People can say whatever they want to say. They can speculate, but at the same time, we are going to live our own lives, enjoy it, and fall for each other like nobody is watching. That is how I want to live," Cabello told Elle in September 2019.

"I never want to open the door for people to feel like they are involved. Like I said, I want it to be mine and [his]. That’s why I’m so tight-lipped about it: because I want to protect it."

That same month, when walking through LAX airport, Mendes told a TMZ camera crew that the couple's relationship is "definitely not a publicity stunt."

The couple also shared a video to Instagram self-parodying how they kiss after Twitter users said how "weird" they looked making out.

"So we saw, like on Twitter and stuff, you guys saying stuff about how we were kissing and that it looks weird, that we kiss like fish... and we just want to show you how we really kiss," Mendes said.

During lockdown in the United States, the couple were seen walking together often; smiling, hand-in-hand, strolling the streets of Miami, and also appeared on Instagram Live, answering questions from fans and performing some music.

It didn't look like a publicity stunt at all.

"Camila and I were so lucky because we were able to just kind of be in a still moment, and it was the first time in the past six years that we've been just able to relax and not work at all," Mendes told Audacy.

"We were going on bike rides around Miami, and it just felt really beautiful."

But assumptions that their relationship was PR stunt returned at the 2021 Met Gala when Mendes' sexuality came into question.

In a video with Vogue where the couple got ready for fashion's biggest night, Mendes said Cabello's outfit was "giving Cher", and fans assumed that one single comment suggested the musician was gay.

Now, after announcing their breakup in November 2021, those same ugly rumours are floating around.

"Hey guys, we’ve decided to end our romantic relationship, but our love for one another as humans is stronger than ever," they said in a joint statement on Instagram this week.

"We started our relationship as best friends and will continue to be best friends. We so appreciate your support from the beginning and moving forward."

And no matter whether the relationship was a PR stunt or not, speculation about people’s sexuality should never be part of the conversation.