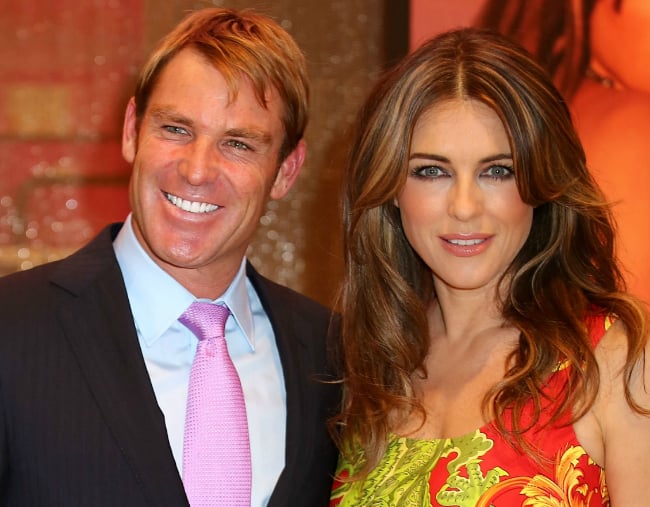 They were Twitter’s King and Queen of oversharing and our favourite celebrity couple at the time – and now Shane Warne has shared new details of his not-to-be relationship with actress Elizabeth Hurley.

In his memoir, No Spin, the former Australian cricketer details his romance with Liz Hurley, giving new insight into why the couple split in 2013.

At the time, it was a long drawn out rumour that the pair had broken off their engagement (Warne made an impromptu proposal in 2011) with neither party confirming the news outright for months.

The first indication that something was really wrong with the couple – who had met in 2010 in a private box at a racecourse in England and immediately hit it off – was when the normally regular Twitter users both stopped posting.

A short time into the social media freeze in September 2013, the couple addressed media scrutiny and reports of their split with conflicting Twitter statements.

Hurley apologised to her fans for the "Twitter silence" and hinted that a something serious occurred with the statement: "Too raw & personal to share right now."

However, that same day Warne dismissed reports of their breakup as "absolute rubbish".

"Yes we’re sorting through some (private) issues. But we’re not throwing the towel in yet," he wrote.

However, despite photographs of them looking happy together at around this time, it was only three months later in December that they split for good.

Warne waited until February 2014 to confirm the news, appearing on the Today show to talk to his friend Karl Stefanovic.

"It’s a shame it’s all over and done but that’s the way it goes," he said. "I’m just a man doing the best I possibly can."

On national TV he offered no concrete explanation for the split, but simply said that the pair remained friends who "catch up when we can".

Almost five years on, and Warne has shared more about what led to their breakup, though according to his autobiography there was "no single, clear reason" for it.

According to extracts published on News.com.au, distance played a role.

In 2013, Liz took up the part of Queen Helena on TV drama The Royals and the time she spent in England apart from her fiance concerned the cricketer in more ways that one.

"The more you’re apart, the more you ask questions," Warne wrote, hinting that he became jealous of her friendship with ex Hugh Grant.

"I got jumpy about the time Elizabeth still spent with Hugh Grant … He is her best friend but they saw each other more when I wasn’t around so, well, you know."

However, the relationship ended amicably enough that the pair remain friends years on.

In June this year, Warne posted a birthday message to his former fiancee on the day she turned 53.

And in the book he even uses the word "love" to describe their current relationship, perhaps hinting at a possible reconnection one day.

"We still love each other in many ways — we’re not in love, like we were — but I still care for her deeply."

"I think we were good for each other and I know that I miss the love we had."

No Spin is available in bookshops or online.