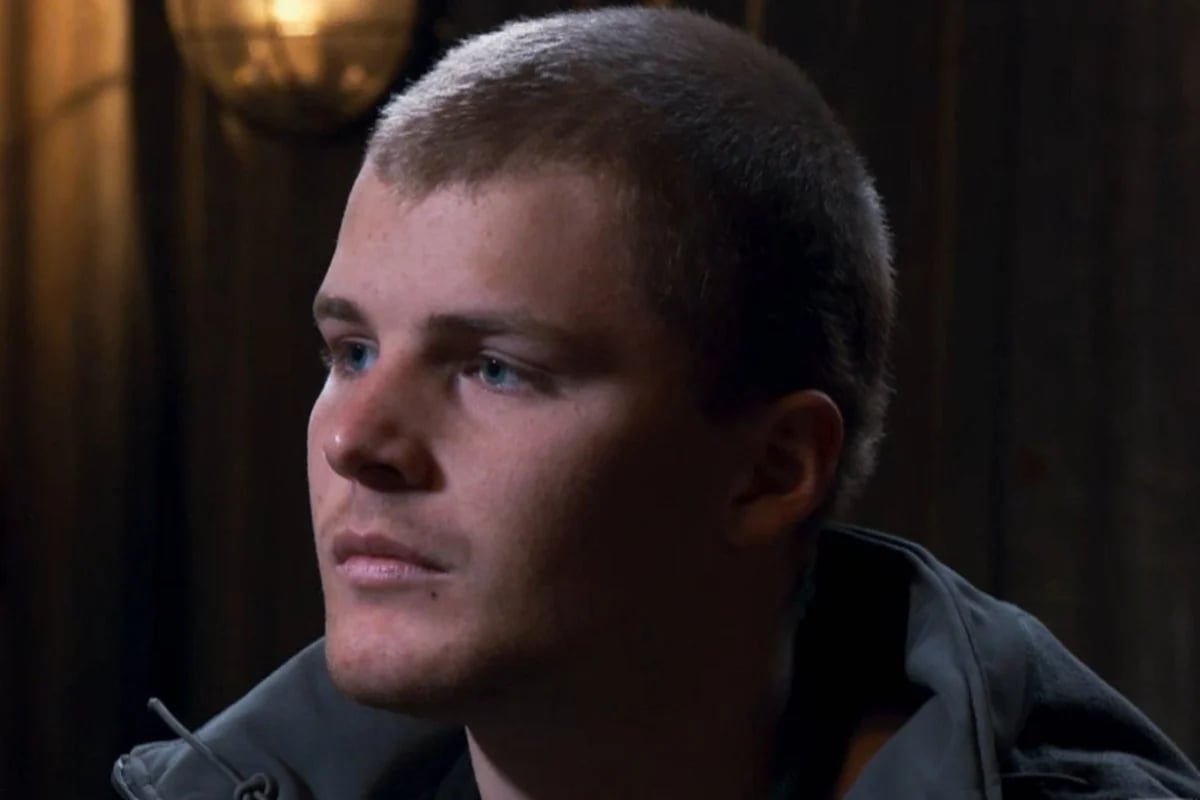 Jackson Warne is on a quest to step out of his father's spotlight.

The 21-year-old, who is currently on Channel Seven reality show SAS Australia, is determined to prove there's more to him than his connection to one of the most famous Australian cricketers.

"I just want to make my family proud, and this is one of the hardest things I'll ever do," Jackson shared on SAS Australia.

"But it's going to be as Jackson Warne. Not as Shane Warne's son."

During Tuesday night's interrogation on SAS Australia, Jackson gave insight into living in his father's shadow.

“It’s been pretty frustrating my whole life,” he said. “Whenever I walk into a room or meet someone it’s always, ‘Oh that’s Shane Warne’s son Jackson’. It’s never, ‘it’s Jackson’. I just want to be Jackson.”

Later, he elaborated, explaining: “I kind of wish in another reality that I wasn’t Shane Warne’s son."

In a post shared to Instagram, the 21-year-old further opened up about his decision to appear on the gruelling TV show.

"Whilst I was happy with my life and very content with my day to day, I felt that I was almost too comfortable and something was missing," he wrote.

"So why did I do it? Simple answer: 'Get comfortable being uncomfortable'."

Whilst I was happy with my life and very content with my day to day, I felt that I was almost too comfortable and something was missing. I was doing the same thing, eating the same food and stuck with the same thoughts, caught in this cycle. I needed a change. So why did I do it? Simple answer... “get comfortable being uncomfortable” October 19th @sasaust7

Jackson is the only son of Shane Warne and his former wife, Simone Callahan.

Warne and Callahan, a certified yoga instructor, first met in 1992, before getting married in 1995 around the height of Warne's cricketing career.

In the years that followed, the couple welcomed three children – Brooke, 23, Jackson 21, and Summer, 19.

Throughout their marriage, however, Warne faced countless affair allegations.

In 2000, the cricketer was stripped off his vice-captaincy after he was caught harassing a British nurse with lewd phone calls and voice messages.

In 2003, a Melbourne woman came forward, claiming that she had had a three-month affair with the cricketer.

Then, in 2005, three more women spoke publicly about their alleged experiences with Warne, including one woman who exchanged dozens of lewd text messages with the cricketer.

After 10 years of marriage, Warne and Callahan divorced in 2005. For years afterwards, they had an on-and-off relationship, with the couple living together for some time. 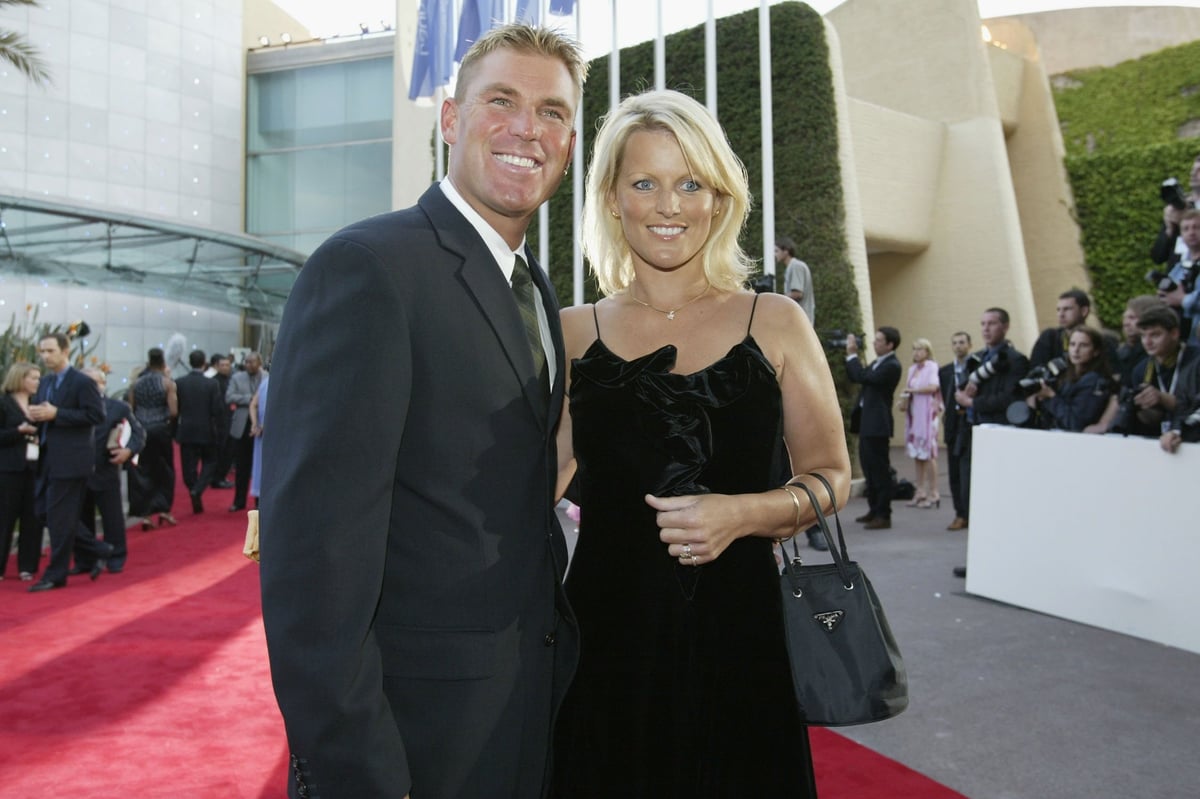 But after photos surfaced of Warne and British actress Liz Hurley in late 2010, the cricketer confirmed that their relationship was over.

"Sadly and unfortunately Simone and I split up a while ago. Our close friends and family were informed at that time," he said in a statement on his website.

"It is a private matter, so we did not make it public. We remain friends and will continue to be good parents."

In 2018, Callahan opened up about their split, telling The Sun "the kids were hurt and upset" after they found out about Warne's relationship with Hurley via the media.

"I remember getting up in the morning, turning on the computer and seeing those photos," she recalled.

"I was shocked and embarrassed for the children because it was so public and this was just before the holidays. It ruined our Christmas," she continued.

"Shane is a little kid, like Peter Pan, and he doesn't think about how his actions will impact other people.

"You would think that a mother like Liz Hurley would be more mature and respectful of my kids, but she wasn't.

"I don't believe in hatred and ­bitterness but I do believe karma will make things right in the end." 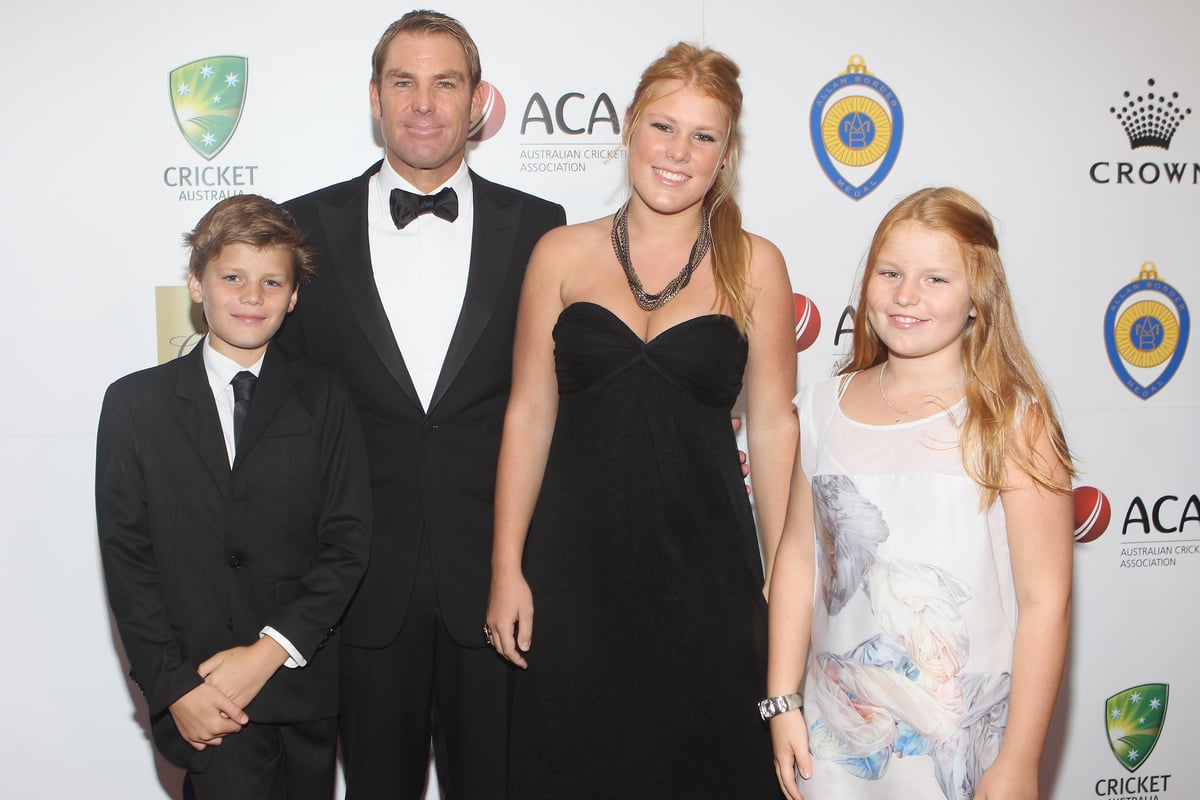 Shane Warne and his children in 2012. Image: Getty.

Speaking to A Current Affair in 2018, Callahan shared that she was unhappy living in the public eye during her relationship with Warne.

"I didn't really enjoy that time in the spotlight," she admitted.

"The person I wanted to be was suppressed a little bit, through everything that happened," the 50-year-old added. "I tend to shy away from all of it."

On Fox Sports show A Week With Warnie earlier this year, Warne shared that he isn't proud of all of his decisions.

"I made some horrible mistakes and choices with things. But I was always true to myself, and that’s what I’m proud of today," he shared.

"Some of the things were really hard to take. I let my family down; I embarrassed my children... but that’s something I have to live with," he added.

Growing up, the Warne children didn't exactly have the most conventional childhood.

Brooke, Jackson and Summer were all quite young when Warne retired from the professional stage, and they always viewed the cricketer as "just dad".

But growing up, Jackson, in particular, felt pressure to follow in his father's footsteps.

"I played [cricket for] one year when I was at school, and in one of the games it got in the newspaper and made some articles," Jackson told news.com.au last year.

"The pressure and expectations... I just was not really interested.

"But when we were going through school, it didn’t matter what we wanted to do, Dad just wanted us to be happy."

Warne told the Sun Herald he never projected his love of cricket onto his son.

"I never pushed Jackson into cricket. He played it for a year, took a hat-trick - took four wickets in five balls - bowling a little bit of leg-spin or with the seam, smashed a few with the bat. Still, the game didn't really grab him," the 51-year-old shared.

Speaking to news.com.au, Brooke shared that she only recently recognised her dad's sporting career.

"I think when we were little we didn’t appreciate how much of a legend he actually was and how much he did," she shared.

"It’s only recently, the past two years or so, we’ve started to realise, he’s bloody good. He changed sport completely."

While little is know about what Brooke and Summer are up to in 2020, Jackson, who has tried modelling, hopes to become a professional poker player.

"I want to leave my mark in the poker world as Jackson Warne," the 21-year-old said on the A Few Off The Wood podcast.

"It is something I definitely want to do professionally."

While appearing on SAS Australia, Jackson made headlines when he admitted that he had never eaten tomato soup before.

"I've only had like 10 different foods before. I've always eaten the same thing since I was young," he told fellow contestant Schapelle Corby.

On the show, Jackson tried steak, pineapple, rockmelon and mandarin for the first time.

Speaking to news.com.au, the 21-year-old shared the foods he typically eats, including eggs, bacon, toast, cereal and burgers.

"In the morning I’d wake up, and I’d have eggs and bacon with an oat shake. I’d go to the gym and train, then I’d have two burgers and a protein shake and then I’d rest for the rest of the day. And for dinner I’d have a lasagne or pasta," he shared.

"It’s not like I don’t want to try other foods, it’s just that I enjoy what I’m eating and it works for me."

On his Instagram page, Jackson has started documenting himself trying new foods, including watermelon and beer.

"One New Year’s Eve when I was really young, Dad was super pissed, and he gave me some of his VB. I had a sip and went, 'No way, never again.' That was horrible. It was the worst thing I’ve ever tasted," he shared.

"I went straight onto the vodka instead," he added.

The 21-year-old also shared that he has never tried a vegetable before.

"So it goes toast, cereal, eggs, bacon, pizza, pasta, lasagne and apples. I've never had a veggie," he admitted.

He also opened up about his father's weird food habits.

"Funny story with baked beans, when we used to go out as a family for breakfast. My sisters, my mum, and I would order eggs, bacon, omelette or whatever but dad would bring in his tinned spaghetti or baked beans and ask them to put it on pieces of toast [for him]. That’s how much he loved his baked beans!"

You can watch Jackson Warne on SAS Australia on Mondays and Tuesdays at 7.30pm on Channel Seven.