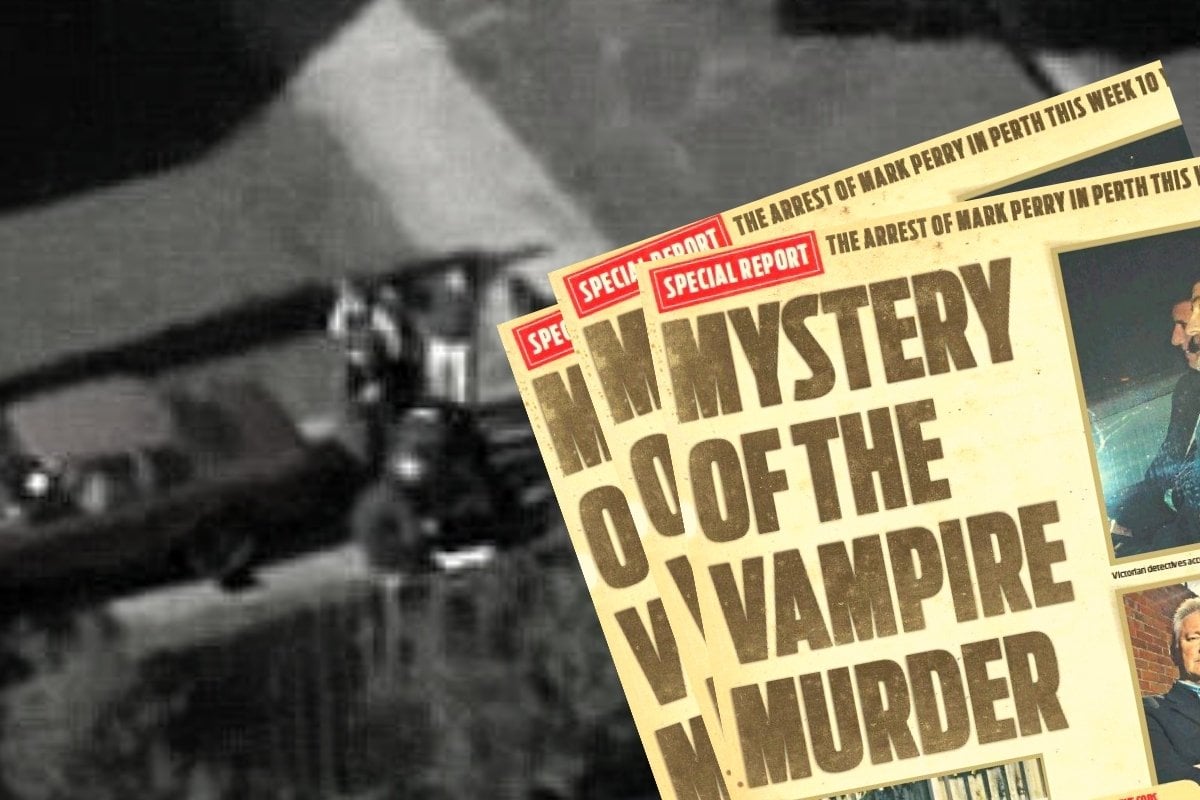 Warning: The following deals with sexual assault, which may be triggering for some readers.

On the morning of June 4, 2003, news helicopters circled over the Melbourne suburb of Reservoir, cameras trained on a particular Howard St home. Single story, white weatherboard with a terracotta-tile roof.

A sedan was parked in the driveway. Behind it, lay the body of a man, splayed and bloodied.

Watch: Mamamia's True Crime Conversations explores some of Australia's most notorious cases, with the people who know the most about them.

Paul Fuller was among the camera operators hovering above. For him, there remains something indelible about the scene that day.

"I know the events that had lead to this moment with this guy, and it had these very strange, exotic and slightly macabre elements to it," Fuller told podcast The Trial of a Vampire. "But there was something kind of dreamlike about the moment as we orbited around, because it was almost likely something that someone would have written for a drama... It didn't feel quite real."

The man laying dead in that driveway was Shane Chartres-Abbott, a man who was due in court on rape charges. Courtesy of tabloid headlines, many knew him by another name: 'the vampire gigolo'.

It happened at Hotel Saville in Room 307.

On the evening of August 16, 2002, Shane had been summoned to the South Yarra hotel by a 30-year-old woman named Penny*.

Yet, the scene discovered in Room 307 the following morning told of a gruesome violation.

The hotel manager, having noticed the pair hadn't checked out, inspected the room and found the woman curled in the shower recess, surrounded by bloodied sheets. Her face was swollen and her tongue had been partially severed.

Penny, who'd also worked in the sex industry and whom Shane had been with several times, had no memory of the assault.

But Shane was the last person she recalled seeing that night. Her blood was also found on a jacket at his home, and her phone was in his bag.

Police had their suspect.

But, according to Walkley Award-winning journalist Adam Shand, there were questions that went unanswered.

Adam has been reporting on Shane Chartres-Abbott for more than 18 years, including via the investigative podcast The Trial of a Vampire.

"We've had a good look at [the events of August 16/7], and we didn't feel that that was an ironclad situation," he told Mamamia's True Crime Conversations podcast. "There were ways that people could have got into the hotel room, including by a broken back door, which had no alarm on it. So there was some doubt over it. But it was sort of pushed to one side because of the nature of the injuries, and also the nature of the suspect."

Shane had an interest in black magic, witchcraft and superstition. Penny, with whom he'd had several encounters, claimed that he'd told her that he was "a 200-year-old vampire who needed blood to survive".

Yet Adam suggests that the vampire was a character, a "part of his escort schtick".

"People were buying a fantasy of fiction," he said, "but when it hit the press, what seemed to be was the 'here's this bloodthirsty guy...'"

Shane was charged with multiple counts of physical and sexual assault, all of which he denied.

He claimed to have left Penny in the hotel around 5am, entirely unharmed, and speculated that another person must have subsequently attacked her.

Shane raised sensational allegations to his lawyer that Penny had warned him there was a target on his back the night of their last encounter. He claimed she said that a group of people planned to use him in a pornographic 'snuff film' — a purported genre in which a person is killed on camera for the perverse pleasure of viewers.

No evidence was found to support the claim. Be he was insistent.

Shane believed members of this ring had attacked Penny, and set him up. The jacket (which was too large for him) and the phone had been planted, he argued.

As the podcast explores, Shane told several people in the lead-up to the trial that he was being watched and that he feared for his life. Yet he was resolute in his determination to take the stand and assert his version of events.

The day Shane was due to give evidence in court, was the day he was executed outside his Reservoir home. His pregnant girlfriend was with him at the time.

She told The Herald Sun of her memories that day. Of the two masked men approaching. Of one pushing her to her knees. She noticed a handgun in his other hand, then heard two shots.

"I thought it was a kid’s cap gun," she said. "It didn’t sound like it did on the movies. It wasn’t like this explosion; it was just popping noises."

Shane suffered shots to the throat and chest. He died at the scene.

The suspect had become a victim.

The investigation into Shane's murder became the most expensive in Victoria's history at more than $30 million.

It spanned more than a decade, and included a criminal trial and a costly probe by Victoria's then anti-corruption watchdog, the Office of Police Integrity.

Much of it was based on a story that came from behind bars, courtesy of a hitman whose name shall not be reported.

This person, who Shand refers to as 'The Author' due to his penchant for storytelling, claimed he had killed Shane Chartres-Abbott as a favour to an associate who made the request on behalf of a man named Mark Perry — Penny's former lover.

The Author alleged two police officers had aided in his crime by leaking Shane's address and temporarily concealing the murder weapon.

The Author was serving life in prison at the time, and according to Adam Shand was offered a range of incentives by prosecutors to provide evidence. Adam also notes that Victoria Police were in the grips of the gangland murders, a series of slayings by rival organised crime groups.

"I think anyone who knew The Author knew he was an inveterate liar and should never have been taken seriously. But because there was a chance now to find the nexus between the gangland war and corrupt Victoria Police, it consumed the leadership of Victoria Police," he said.

"They had no leads. They were way, way behind... So to have this confession was manna from heaven. And they were prepared to stand up no matter what."

But when tested, The Author's claims fell apart.

No charges were laid against the officers as a result of the corruption probe. And in 2014, a jury acquitted Mark Perry along with two other men The Author had implicated in the plot: Warren Shea and Evangelos Goussis (the man jailed for the murder of gangland figures Lewis Moran and Lewis Caine).

So what of justice? Penny's brutal assault remains unpunished. As does Shane's murder.

Adam Shand is hopeful that can be rectified.

"I have some cunning plans left to make that happen. To be honest, I'm working on those right now," he said.

"I think it's all about The Author, because he could tomorrow decide to tell the truth. And then just crater the whole prosecution, as ridiculous as it was, and tell the truth of what happened: the fact he had no involvement whatsoever; he never met Mark Perry; he'd never been involved with the ex-police in the way that he claimed to.

"He could do it tomorrow. He has nothing left to live for. I don't know why he doesn't do it."