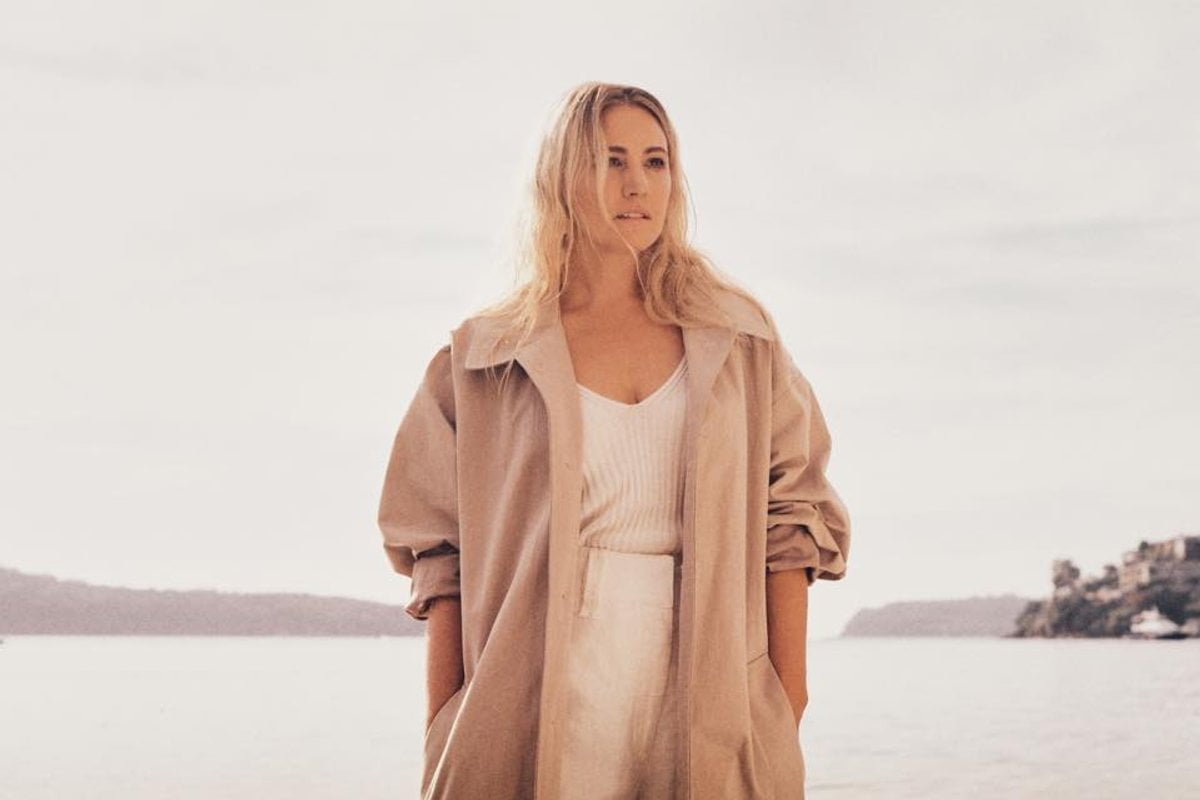 This post deals with sexual harrassment, and could be triggering for some readers.

It was Summer 2013. Aussie darling of pop soul Jessica Mauboy was performing her heart out to a packed crowd, at the mercy of her every note and every glamorous costume change at the Star Event Centre in Sydney.

A wide eyed junior employee of a major record label was with a group of colleagues and executives enjoying the spectacle.

"I remember standing with one of the executives when he made a joke, and I innocently nudged him. He turned around, reached out and grabbed my breast, in a room full of hundreds of people with a male industry colleague standing right beside us who witnessed it all unfold," she alleged, wishing to remain anonymous.

"When he grabbed my breast, he laughed, and I froze. It was very visible that I was uncomfortable. I felt humiliated and still question to this day what I did to make him think it was okay to touch me like that."

Watch: The trailer for Four Corners' investigation into Sony Music. Post continues below.

She went on to explain that this was not an isolated incident. And, as had happened before, and would happen again, my friend, an accomplished marketer, publicist, and manager, said that the man standing directly beside her perpetrator said, and did, nothing.

Sexual harassment in the Australian music industry has been widely reported in the media of late, thanks to women who are finding support among their peers to tell their stories through mechanisms such as the anonymous social media account Beneath the Glass Ceiling, and the research of Dr Jeff Crabtree, produced earlier this year, as well as numerous reports by Australian music industry publication, The Industry Observer, Schwartz media’s podcast Everybody Knows, and the ABC 4 Corners investigation into Sony Music.

But sexual harassment is rampant in the music industry because it is a symptom of a system that is built on a slave/master model that the music industry has adopted for the better part of the last century – remember Judy Garland?

Drugged, groped, and starved by a system that exploited her voice and her art. This is not new. Make no mistake, this is the way this business works.

Not all women experience overt sexual harassment. While many do, what every single woman who works in music will experience is an unequal power dynamic that is hard to name in the first instance.

I, myself, think back to my own experience. It was 2003, and I was at the Cafe Metropolis in Cremorne, on Sydney’s lower north shore. I had just spent the better part of a year recording my first EP.

"I love it. Great voice. Good songwriting. You look great. The whole package," the man across from the table told me as we sipped on lattes. The jewel cased CD lay on the table, a prop that this man in power kept picking up, spinning round, tapping his fingers upon, as he praised my work.

That this record executive, this highly favoured decision maker was spending his precious time, paying for coffee, taking time out of what must be a very busy schedule to meet with me as a young hopeful artist was one of the biggest confidence boosts I'd had at the time. I was giddy. This was the moment I had hoped for. And yet. The next words were unexpected.

"You need to get on Neighbours, though." Um. Sorry, what?

In a flash, we went from talking about my craft, my music production, songwriting arrangements, and the artistic process I had meticulously managed, to talking about me being on television?

I could hear the brakes of this music industry road train screeching to a stop.

"Neighbours?" I asked, just to be sure.

"Yeah, you know, to boost your profile," he said.

Wouldn’t that be your job? I wondered to myself.

"Get yourself an agent, get some television work."

I did not get myself an agent. I did not look for television work.

It would be the better part of a decade for me to regain my confidence. In fact, I pursued music as more of side prospect while I studied political science in order to "get a real job" and the idea of music being a vocation for me was all but gone. Until I got a call in the middle of the night from Jackson Five star Jermaine Jackson in 2012, after he discovered a song of mine.

"Who are you? Why don’t we know you? You write like Dionne Warwick," he said.

Were it not for this call, and the two years of mentorship with Jermaine that followed, I would never have considered music again.

Jermaine reminded me of my craft, he sang my songs back to me, told me I had a great voice, and reminded me why I loved music in the first place. (And going on tour with the Jacksons was pretty cool too.)

Alan Williams, associate professor and coordinator of the music business program at the University of Massachusetts told USA Today: "Part of the issue is that the music industry has for well over a century been in the business of exploiting musicians."

"In the world of publishing, that term is used explicitly — 'exploiting' a copyright. Thus, musicians of any gender start from a place of disempowerment. The situation gets more challenging for women navigating the industry," Williams says, "with their experiences exacerbated by conceptions of 'stardom' that are sexualised from the outset."

There are bottlenecks at every turn in the music business. Because of the slave/master model the major record labels maintain with women, there is a false narrative that there can be only be a few people who will "make it". But there is a growing movement of artists, especially in the UK and the US, who identify as "middle class" working musicians.

They manage their own music business as they roll out their music, in all sorts of ways. After all, it is the very nature of being an artist to think outside the box.

Still, a survey taken at the South by Southwest conference showed that 97 per cent of current artists still want a major record label deal.

Brian Dubb, who works with independent artist Imogen Heap (who sang the Christmas heartbreak hit 'Let Go' from the movie The Holiday) and has created a platform for artists to manage their own music in the same way the major labels do, thinks this is madness.

"It really is a slave-master relationship," he said on a Clubhouse call with Imogen Heap last week.

He said artists should not be pursuing such contracts, and it is why he set up his artist and management tool Centralized.me to empower artists to work for themselves.

You see, the major record labels will stop at nothing to ensure their chosen artist at any particular moment in time gets to number one.

Phoebe* worked at Sony Music for 10 years. She told me that in May 2013 an artist had what the industry defines as a "priority single track" that needed to be rush released.

Phoebe’s job was to ensure it was live on a telco platform to allow customers to download it in order to contribute to ARIA chart sales.

"It was a company priority to get the single to number one," says Phoebe. Due to the pressure to release, Phoebe said there were technical glitches, and the song failed to go live in the ARIA chart week.

The song landed at number two, down by a mere 100 sales or downloads.

The senior team were not happy.

Phoebe says, "They wanted answers as to why it missed the number one position." She says that she and her colleague were called to a meeting.

As Phoebe dialled into the meeting from Melbourne, one senior executive said he was disappointed and embarrassed by the number two result. He went as far as to say, "You should be thanking me for not firing you today".

Phoebe says, "There was silence and then I realised I would have to grovel and thank him for allowing me to keep my job. So after this man said, 'Well aren’t you going to thank me?' I meekly replied, 'Thank you.' I didn’t want to as I didn’t feel what happened warranted it but felt I was backed into a corner. No one in the room defended me, and my excellent work ethic and track record of the last eight years seemed to evaporate in that moment." Later, another senior executive who was in the meeting said to Phoebe, "Don’t worry, he’ll forget it and be onto targeting the next person or next thing soon."

The industry doesn’t need to operate this way.

In fact, things are looking up, even if only a little.

Zac Abroms, director of music business Viceroyalty, tweeted: "The Venn diagram of artists that have gratuitously thanked Denis Handlin in the past and artists that didn’t win an ARIA last night is a circle."

What’s more, it was recently announced that there would be a national review of sexual harm, sexual harassment and systemic discrimination in the contemporary Australian music industry with recommendations for reform. This review would be led by experts in cultural change and gender equality Alexandra Shehadie and Sam Turner, and is the result of the tireless work of artist Jaguar Jonze.

The future is bright for women in music, but only if the current system that enslaves artists, and belittles women who work in the industry, continues to be dismantled.

Take Me Back to the City by Jules is out now. You can find her on YouTube, Instagram, or Spotify.