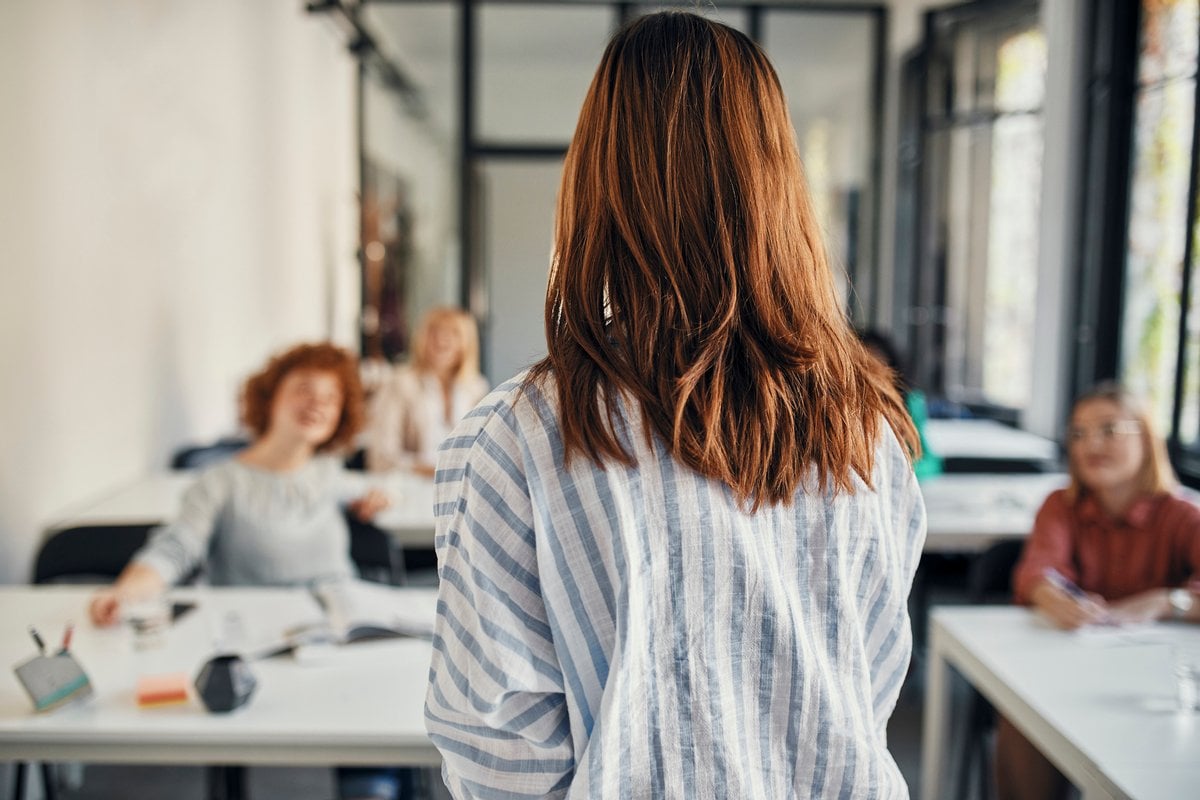 He wore a green polyester tracksuit every time he did a day’s relief teaching.

The zipped-up jacket stretched across his big belly- the kids at school likened him to the guy in the beer ad who sang ‘Belt your beer back, you’re with your mates’.

I don’t remember his name. I do remember the way he would sidle up behind me and press his body against me. More than once.

Watch: Women and Violence: The Hidden Numbers. Post continues below.

I was a 22-year-old PE teacher and I guess he thought I was fair game. I went to the Deputy Principal and complained about this man’s behaviour, only to be told, “You should be flattered!” It was 1981 and I felt sickened by his response.

I’m 21 and in my very first year of teaching, a long way from home, and on the steep learning curve that every newbie teacher has to climb. I’m enjoying the independence of leaving home, and working at a school which forced me to live outside the cosy bubble I had existed in until then.

Many of our students lived in government housing and had very little. Others lived in the big houses on the hill and wanted for nothing. I can’t recall who lived where, and for the most part I got on with the kids, some of whom weren’t much younger than me.

For a few of the young, male teaching staff, some of whom were married, I was fresh meat.

They would visit the small PE Staff room at lunchtime and share ‘banter’ - how I hate that word- with the male PE teachers.

I had no experience of this. I’d grown up in a family where my father was always respectful of women, attended a single sex girls’ school, and enjoyed the company of the guys in my course at uni.

This was my first experience of ‘locker room talk’ and I was outnumbered and very small compared to the men.

The occasional double entendre would be directed at me and I would smile awkwardly and try to get on with my work.

The comments became less subtle; I can’t bring myself to actually write one in its entirety here.

Suffice to say that it made reference to my lips and how I ‘got them’.

What was I to do? I was very young- on the first day when I met the Principal he asked how old I was.

I looked about 16, and perhaps he had some idea of what was coming. If he did, he didn’t say anything.

I was on probation, needing to prove myself in my first year of teaching in order to become a permanent teacher in the government system.

I would never have mentioned it to Mum and Dad on the phone; they were worried enough about me being so far away from them.

I felt that I couldn’t make waves in a workplace where I was the youngest and least powerful member of staff. My 21-year-old self said nothing.

For context, l should tell you that in 1980 in the warmer months female PE teachers wore short skirts or dresses, much like modern tennis players.

I was very careful about the length and what I wore under them, and took pride in my professional appearance.

We also wore ‘bobble socks’ which were much like the no-show socks we wear now, but with a pom-pom sewn at the top above the heel to stop it sliding into the shoe. I provide this detail as a bit of light relief, for me at least, in the telling of this story.

I can’t remember the lead up to the incident on the particular lunch time, but suddenly I was hanging upside down, with one of the men grasping an ankle in each hand, and being shaken up and down so they could ‘see my knickers’.

Well, everyone saw them as I struggled to cover them with my skirt as I tried to defy gravity. (I would comment on my allusion to Wicked at length if the incident- and let’s call it by its actual name- sexual assault- wasn’t so horrible.)

Eventually I was lowered to the floor and I scrambled up onto my chair, mortified, as ‘the boys’ laughed themselves stupid.

It was 1980, I was 21, and there was a culture in some workplaces which would appall you.

The events of the last couple of weeks in Canberra are also appalling.

In no way do I compare the alleged rape of Brittany Higgins in a minister’s office at Parliament House to the harassment I received.

Likewise, the historical rape allegations of a woman who is no longer able to speak for herself. But here I sit, aged 62 and in my retirement after 40 years of teaching (I moved out of PE after seven years), moved to tears of frustration that young women still suffer in workplaces where a culture of toxic masculinity is the norm.

Where they have no voice. Where ‘he said, she said’ is the language used by the Home Affairs Minister, a former police officer, to describe rape allegations.

I feel that we may have reached a turning point. I hope so.

Brittany Higgins has courageously opened the door. If you haven’t seen her interview with Lisa Wilkinson, I urge you to do so. It is possibly the most powerful piece of television you will see.

The current climate is ripe for change and the momentum must be maintained. I hope for a future where young women feel confident to raise their voices without being victim blamed, or told that being groped should be seen as a form of flattery.

I hope for a future where there are no more men in green tracksuits.

Reply
Upvote
I was 40 when I started a career in teaching high school students. Overweight and old. I thought I would be safe from sexual harassment by my students. I was wrong. When the female students complained about the male students showing off their underwear following the latest fashion trend, I responded as I'd been taught and told the offending student to pull up their pants. If challenged I would explain about sexual harassment and how wearing their pants like that might constitute harassment.  In response, some cut the draw-cords in their tracksuits so their pants could not stay up. Others would put their hands down their pants to adjust their genitals whilst they spoke with me. One pretended to masturbate in class. When I told them off, en masse they mooned me. I was shocked and distressed. I complained. The school leadership team (especially one particular male co-ordinator) told me it was my fault for antagonising them.
They say rape is sometimes used as a weapon to punish women. Sexual harassment sometimes feels like that. It is not simply entitled or clueless males. Sometimes it is a coordinated attack to silence and humiliate 'difficult' women.
News
General
Opinion
True Crime
Politics
Sport
Explainer
Entertainment
Celebrity
Reality TV
Movies
TV
Books
Rogue
Royal
Lifestyle
Beauty
Fashion
Weddings
Home
Wellness
Health
Fitness
Travel
Food
Parents
Before The Bump
Pregnancy
Baby
Kids
Teens
School
Parent Opinion
Work & Money
Money
Finance
Career
Lady Startup
Relationships
Sex
Dating
Separation
Friendship
Family
Real Life
Couples