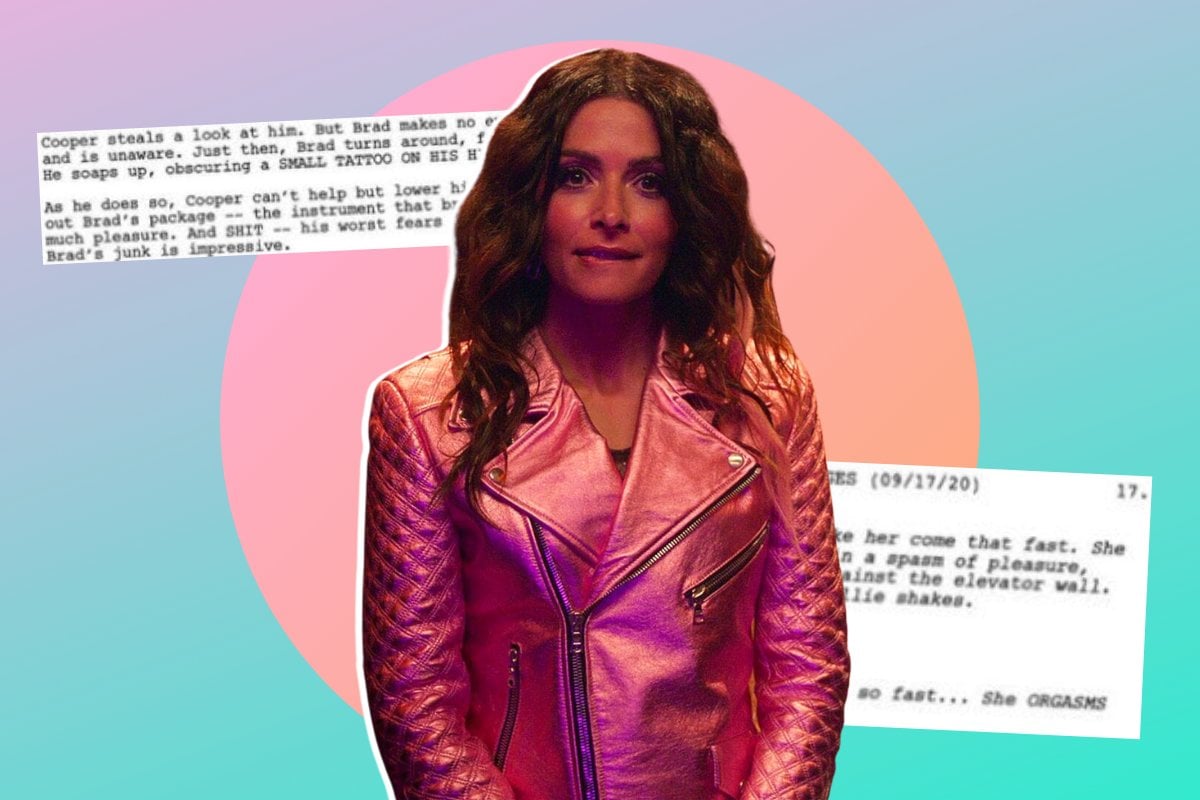 The horniness of Netflix's Sex/Life truly knows no bounds.

The very randy series, which took the world by storm because of its... plot, is actually even steamier than we thought.

I SIMPLY DID NOT IMAGINE IT POSSIBLE.

Watch: No seriously, this show is horrrrny. Post continues below video.

Sarah Shahi, the actor behind the show's extremely... passionate main character Billie, has shared parts of the show's script on Instagram and yep, turns out every nitty gritty detail was laid out on paper.

"The difference with the sex scenes in this project was EVERYTHING was on the page," she wrote.

"Unlike other scripts that can be a bit more vague in their descriptions. This allowed for an emotional point of storytelling to happen THROUGH the sex scenes. Not just sex for shock value."

Look. I'm not sure how much 'emotional storytelling' I personally took from the show, but if she says so.

The first snippet she shared was from the show's second episode. The... pool scene. I'm sure you... recall.

The script sets the scene: synth-pop plays loudly over fragmented underwater shots of "a leg, toes, a belly, a bare ass, breasts and lips..."

"And finally, as we rise above the water, FACES - BILLIE and BRAD going at it in the pool. Again." 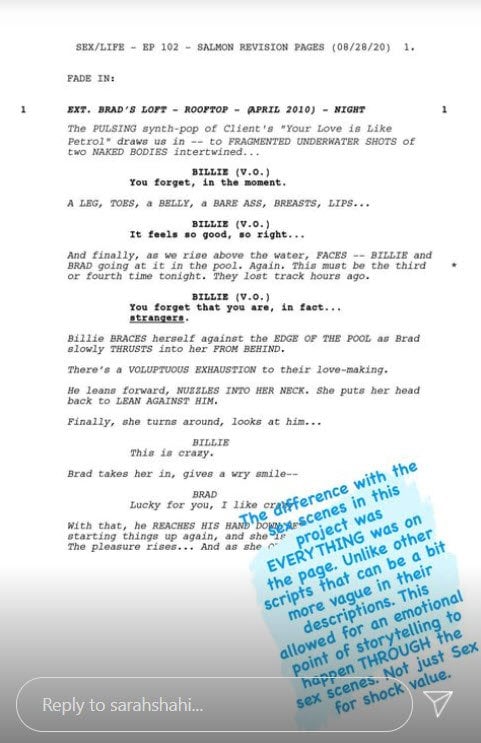 The script informs us that Billie and Brad are like rabbits because "this must be the third or fourth time tonight".

WHERE THE HELL DO THEY GET THE ENERGY?

The script literally spells out the... uh... thrusts. But that's not the weirdest part.

The weirdest part is the use of the words "voluptuous exhaustion". It means so little, and yet so much.

"This is crazy," Billie says.

Next, Shahi shared the script for the INFAMOUS SHOWER SCENE.

The scene everyone in the world Googled.

The scene I was told to watch for work.

As the script outlines, Brad is standing alone and naked in a gym shower.

He is surrounded by "MULTIPLE SHOWER HEADS". It seems like a weird thing to point out, but is definitely the least eyebrow-raising part of this whole thing.

As we know, Cooper then enters the showers and "steals a look at him", but Brad doesn't notice because he's... facing a wall. We can see his butt. Obviously.

This is where... it happens.

"Brad turns around, facing front. He soaps up, obscuring a SMALL TATTOO ON HIS HIP."

Was there a tattoo? Did anyone notice? Unfortunately, I do not recall it as I was HIGHLY DISTRACTED BY SOMETHING ELSE AT THIS MOMENT IN TIME. 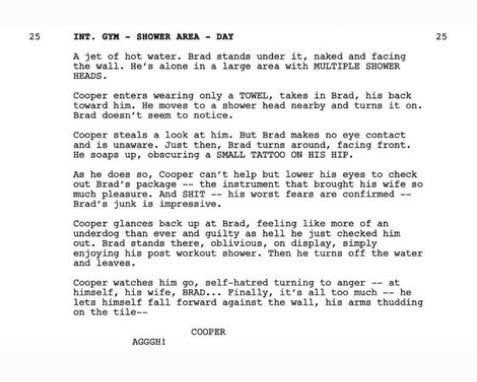 "Cooper can't help but lower his eyes to check out Brad's package," the script tells us, pointing out it is "the instrument that brought his wife so much pleasure". I mean, ouch. The screenwriters really didn't have to do him like that.

Next is my favourite part: "And SHIT," the script reads. "And SHIT" IS RIGHT.

"His worst fears are confirmed - Brad's junk is impressive."

Everything in these scripts is extremely, extremely over-the-top, except this part.

"Impressive" it says. We've all seen it. We know that's not an intense enough descriptor.

After all of that, and after his 'self-hatred turns to anger'(???), Cooper thuds his arm against the wall tiles and says: "AGGGH!"

The next part we are shown is the scene where Cooper takes Billie on a date after reading about her pool escapades on her unlocked laptop.

Cooper 'tenderly' tells his wife he loves her and Billie nearly... cries.

Then he "GOES DOWN, where he hasn't gone in 18 long months."

In case you were wondering, it's "exquisite".

At least until they're interrupted by the owner of the pool, who Cooper thought was away. 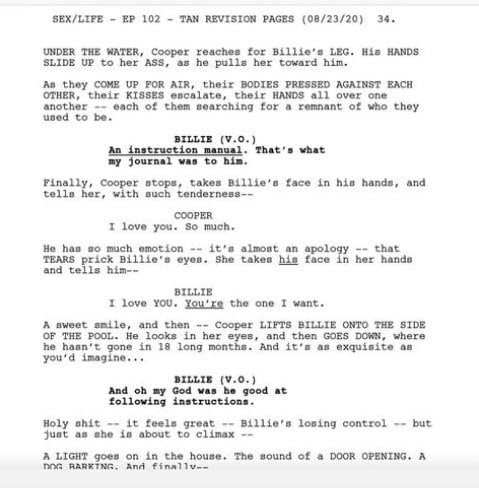 Finally, Shahi shared the script of the elevator ride where Billie is nervous about meeting Brad's mother.

It begins with Brad giving her a "sly grin". Naturally.

He asks what he can do to help her relax, but he does not wait for her to... answer. Instead, he lifts her skirt up and, look, I'm so sorry about this but: "slips his fingers inside her panties".

"We're going to twenty-two," he tells her. "You got nineteen floors to come."

I MEAN. OK. BUT THAT'S A LOT OF PRESSURE. 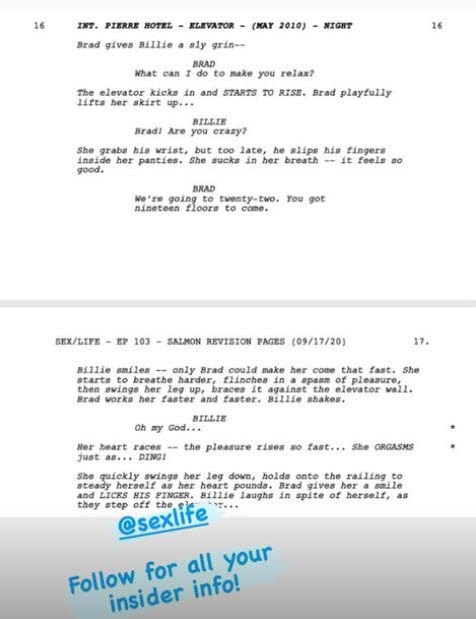 The scripts tells us that Billie leans into the challenge and GOODNESS, SHE COULDN'T HAVE TIMED IT BETTER.

Billie swings her leg down and steadies herself. Brad licks his finger. AND THEN THEY HEAD OFF TO MEET HIS MOTHER.

If you thought watching this show was... a lot, reading it really is something else.