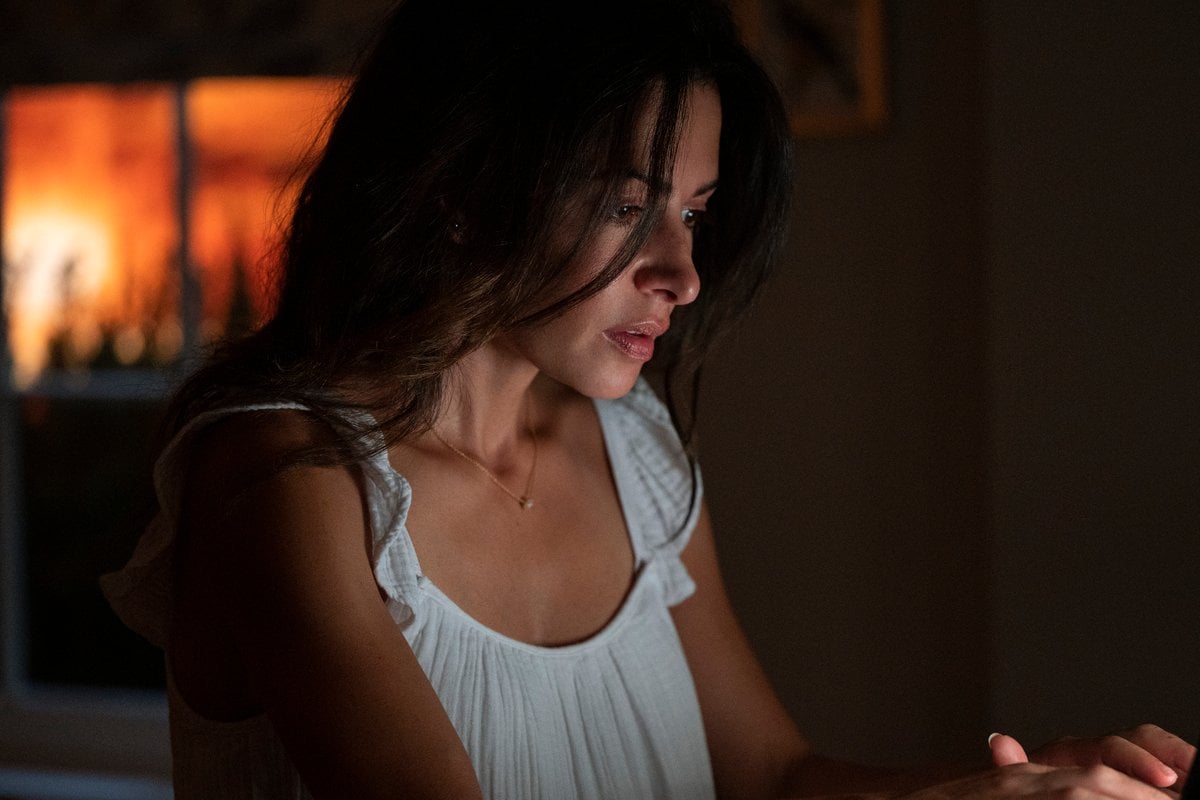 It’s 2021, and as clever, feminist women, we like to think we’re progressive. Yet, for the second time this year, many of us have lost our minds over another good-looking bad boy winking at us from our Netflix home screen.

I’m not mad at myself. I’m not even disappointed. Because hell, there’s honestly nothing else going on in my #lockdownlife, so bring on the terrible TV.

Are we discussing our careers? Nope. Are we discussing the scary state of the political landscape? Absolutely not. What about even the #FreeBritney saga!? Not even a mention. What’s dominating every group chat is the monster cock that makes a FULL-FRONTAL appearance in this trashtastic new show*.

Watch the trailer for Sex/Life. Post continues after video.

Sex/Life revolves around Billie, who is married to the lovely Cooper, and they live in the suburbs with their two children. Once upon a time, she had fabulous sex with a tall man named Brad, who decides he’d quite like to come back into her life to f*ck sh*t up after seeing her for the first time in eight years. And despite being a very clever lass, Billie lets him.

But just as I theorised with Bridgerton, I think most of the online commentary around Sex/Life is coming from a certain generation of women. While the 'Zoomers' or Gen Z are busy dancing on TikTok in their crocs and socks, it's the (hetero) women in their 30s and beyond who can't stop thinking about a certain sizeable shlong.

Just like Billie, I think we can all reflect on our misspent youth with rose-tinted nostalgia. Most of us have an ex in our past who gave us the best sex of our lives, and we ALL have memories of times that were far more careful and selfishly wonderful.

It was only three weeks ago that I was driving along Bourke Street and started to cry because 'Innerbloom' by Rufus Du Sol was playing and I couldn’t imagine a time being absolutely cooked and carefree at a festival again. Yes, I cried during a song, but I was crying because, at that moment, I missed a much younger and much more free version of myself.

While socially and statistically, we’re told that men are more likely to cheat in a long-term, hetero relationship, in my experiences and conversations, women are far more likely to be tempted. It’s women who romanticise their single days and look back on them fondly. It’s women who like to live vicariously through their single friends, demanding date deets as soon as it’s done. It’s women who talk about sex more and giggle together over wine as they reminisce over particularly pretty peens they’ve met.

Sorry for the ridiculously generalised and sexist portrayal of my life, but my straight male friends just talk about sport and what BBQ they like.

I KNOW I have too much time on my hands right now, but the characters in this show annoyed me far more than they should have. Brad’s character was put on a pedestal, and the idea that Billie might end up with him was romanticised. Maybe I’m the only one that gauged this, but it made me SO uncomfortable. Brad was a toxic f*ck-boy that relied on ‘daddy issues’ to act like a truly terrible human being. He was also a really boring character whose only positives were his lovely apartment and magical (and completely unbelievable) ability to make Billie orgasm through finger bashing her like a 15-year-old. 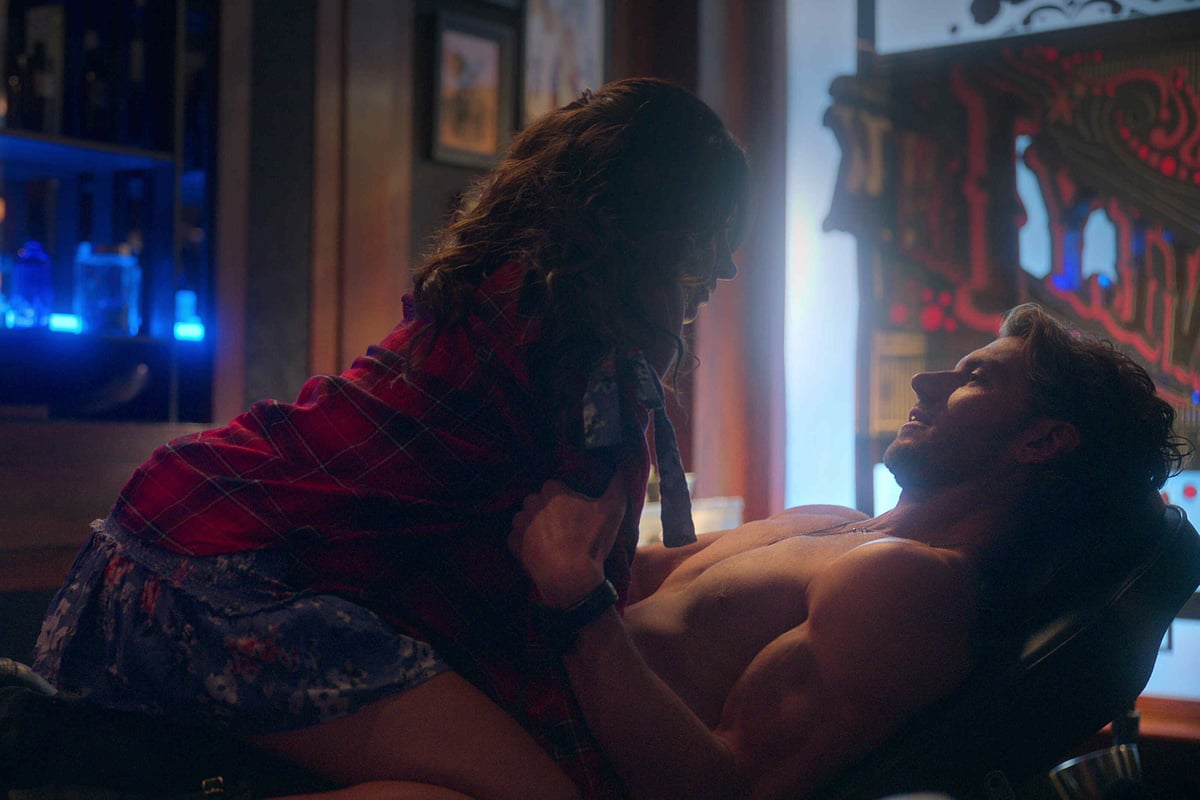 Billie is a brat who thinks she’s special because she had ridiculously good sex with someone once upon a time. Wake up doll, we all have a sexy ex who made our toes curl. For some reason, it’s generally the ex that fits into the tired yet relatable ‘bad boy’ trope. When many of us reminisce of the best sex of our lives, it’s generally not with who we’ve ended up with, or our kind boyfriend in our early 20s. It’s with the person that came into your life and f*cked shit up. They brought drama and danger, which is why the sex was so hot. Of course, there are exceptions to the rule, but the same man that asks you to squeeze his back blackheads and brings you cups of tea in bed is probably not going to perform a muff dive publicly.

We love the fantasy of stepping out of our comfortable lives and reflecting on a time when sex was a priority - even when that fantasy is wrapped up in an objectively terrible TV show.

Reply
Upvote
9 upvotes
I’m sorry; but her husband is problematic as hell. How are people missing this?
Society constantly tells mediocre men how amazing they are and this show reinforces that. The show tells us (and everyone in it tells him) that he’s the best man in the world because… he wanted to get married, he was nice to her, he made her dinner and he is nice at work. Yes, these are good things; but surely this should be sort of a baseline expectation of any half-decent man and not the be all and end all of the best of men and partners?
His lovely wife wants to be intimate with him and have sex with him and he either doesn’t, half arses it, or watches sports over her shoulder! WTF! He is not at all in touch with his partner or her needs. Nor is he interested. You need to maintain a positive sexual relationship with your SO!
He is all about his career and wants constant applause from her for it; but doesn’t see how much she has given up in terms of her own career to maintain their family.
He shows very little interest in what is actually going on with her.
He violates her privacy horrifically by reading her journal, and then grabs her face in a violent and aggressive way.
And that’s just in episode one.
This guy is endless red flags. He is not lovely. He is not the ideal. He is a Nice Guy TM being shoved down our throats as the perfect guy and due to our internalised misogyny we accept it. Ugh. This show is full of toxic masculinity. All of the men in her life suck. Why is this the best we can do?
S
sogden03 4 months ago

Reply
Upvote
@snooze this comment is everything! Thank you!
M
mamamia-user-197644376 4 months ago

Reply
Upvote
2 upvotes
@snooze I totally agree with this. In my opinion Billie’s behaviour is also toxic, but why is her husband portrayed as the ‘nice perfect guy’ that all straight women should supposedly want?!!
You forgot to mention the party where he continues to violate her after she clearly said no, then blames her for his own behaviour.
J
jrtassie 4 months ago

Reply
Upvote
1 upvotes
@snooze thank you for saying this so well!! I 100% agree with you and I am so annoyed that everyone just sees this show as a ‘misled woman going back to her shitty ex’… it’s not! Her husband makes her so sexually frustrated she’s thinking about someone else! Men need to do better here, not women 👏🏻
G
guest he him 4 months ago

Reply
Upvote
2 upvotes
@snooze Hang on, are you saying that a mismatched sex need between long term partners allows the partner whose needs aren't being met to run back to an old flame for purely physical needs?
I don't think Netflix would run this scenario in reverse as that would just be called "Husband cheats with Ex" and get 0% of 51% of the population watching. (Sorry for the rubbery %s)
A
albec07 4 months ago