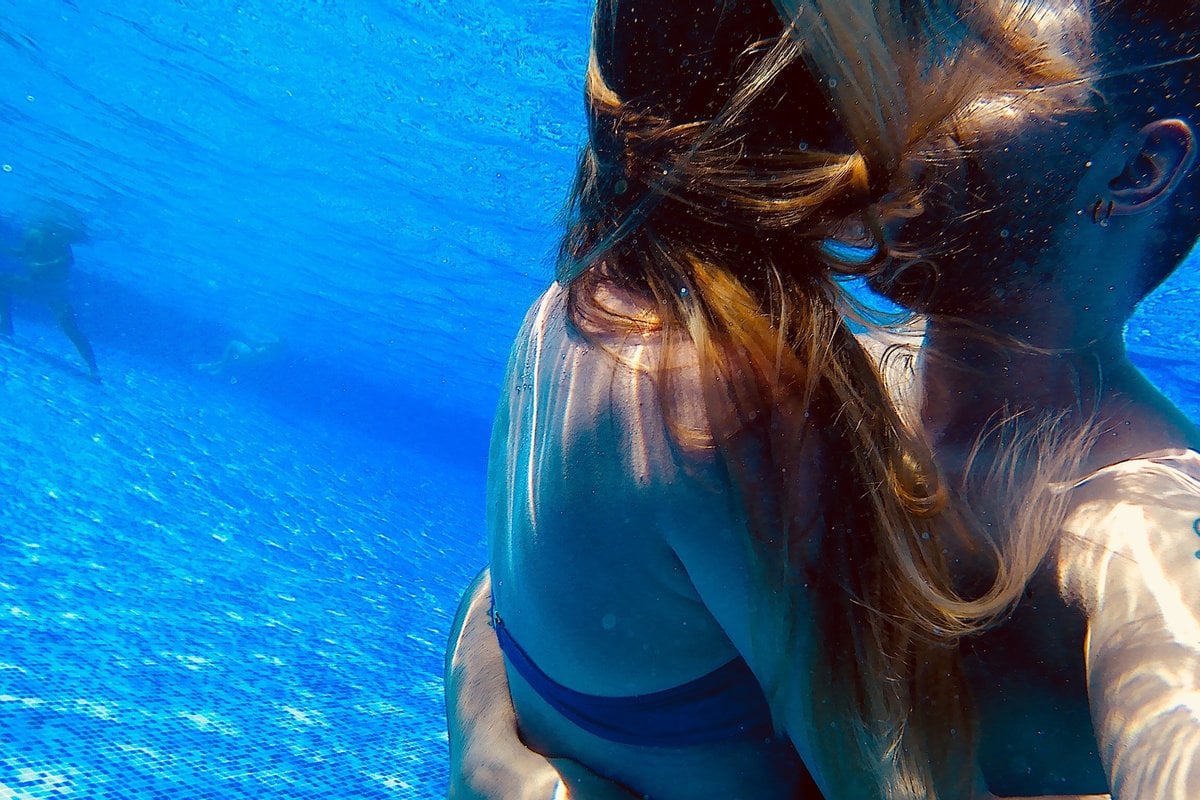 He told me later that it all started the moment he clocked me from across the beach club.

I’d been in the pool, in my teeny, tiny sparkly gold bikini, when I walked past him.

“You had the most infectious energy,” he said, “and your body looked unreal!”

But for me it all began when his friend asked me to guess which one of them was single.

Michael was the last one I picked.

Shirtless in grey board shorts with pecs that made me weak and arms so big I lost all concentration, he was gorgeous. ...So I didn’t think there was any chance he’d still be single.

I was immediately excited.

He smiled at me, sending waves of possibility through my body. Without question, I was drawn to him like a moth to the flame. And the sexual attraction between the two of us was undeniable.

I knew I needed his hands all over me so I cheekily suggested he looked strong enough to do the Dirty Dancing lift.

With his fingers wrapped around my waist and my hands on his bulging shoulders, I flew above the pool. Until I came crashing down into a sea of limbs and vodka.

“OUT!” the security guard bellowed as I came up for air, laughing into the chlorine. Making our way back to the sun bed, we collapsed in a heap of wet and almost naked bodies.

Afterwards Michael said we spoke about all things life, work and relationships.

But what I remember is his searing blue eyes burning into mine.

Neither of us were able to stop smiling, and it was the most intense sexual connection I’ve ever had with a stranger.

Soon we were kissing.

Deeply, passionately, it was all-consuming, as if everything had been hurtling up to this inevitable moment.

The whole world disappeared around us.

The party, the people, the music, the beat all blended into the background.

It was just him and I.

But as the sun began to set, I pulled myself away and insisted that we watch it disappear into the sea.

I was standing on my tiptoes, trying to see over the fence, when Michael swooped me up onto his shoulders.

Suddenly, a voice behind us barked, ordering me to get down.

“The only place to watch the sunset is on the rooftop terrace which is VIP,” the security guard grunted.

Michael shot me a look that said it all.

By the time we’d snuck upstairs, the balcony was surprisingly quiet and there was an empty hot tub right in front of us.

We couldn’t believe our luck, and climbed in.

As the sun fell into the sea that evening, Michael leaned across the bubbles and kissed me again, before pulling me onto his lap so I was straddling him.

“We kissed so f***ing passionately,” he reminded me later, “your hands wandered, as did mine, until we were both ready to rip each other to bits.”

On top and in control, my right hand snaked down his body towards the drawstring of his shorts. Easing my fingers under the material, I let them slip until I was grasping him in my hand.

With an inhale of breath, Michael pulled me close as I played with him below the waterline. Sliding his own big hands across my back and around to my front, he pushed my bikini top open until my perky nipples were free. Quickly slipping his lips over them, he sucked hard and fast, sending sensations plummeting down my body.

Tingling with pleasure, I lost all thought as I threw my head back and gyrated across his lap. Pulling my mouth to his once again, Michael reeled me in, keeping my face in front of his while his fingers found their way into my bikini bottoms.

Sliding his index inside me, he pushed against my flesh, hitting exactly the right spot.

I bit on his lip in an effort to keep calm, as he slipped another finger in and begun a circular motion.

It was all becoming too much to bear as my breathing accelerated and heart raced. Michael held me against him as the hot water bubbled and hid his action beneath the water.

With a final push against my clitoris, I came undone, pressing my mouth against his in an effort to mask my orgasm.

Panting, I looked into his clear blue eyes and laughed at how carried away we’d gotten in such a public place.

Suddenly, his smile dropped as he looked over my shoulder.

“You two aren’t meant to be here,” yet another security guard boomed. “Get out!”

That was seven weeks ago, and Michael and I haven’t stopped messaging since.

He’s finally coming to visit me next weekend.

And this time, I won’t be holding back.