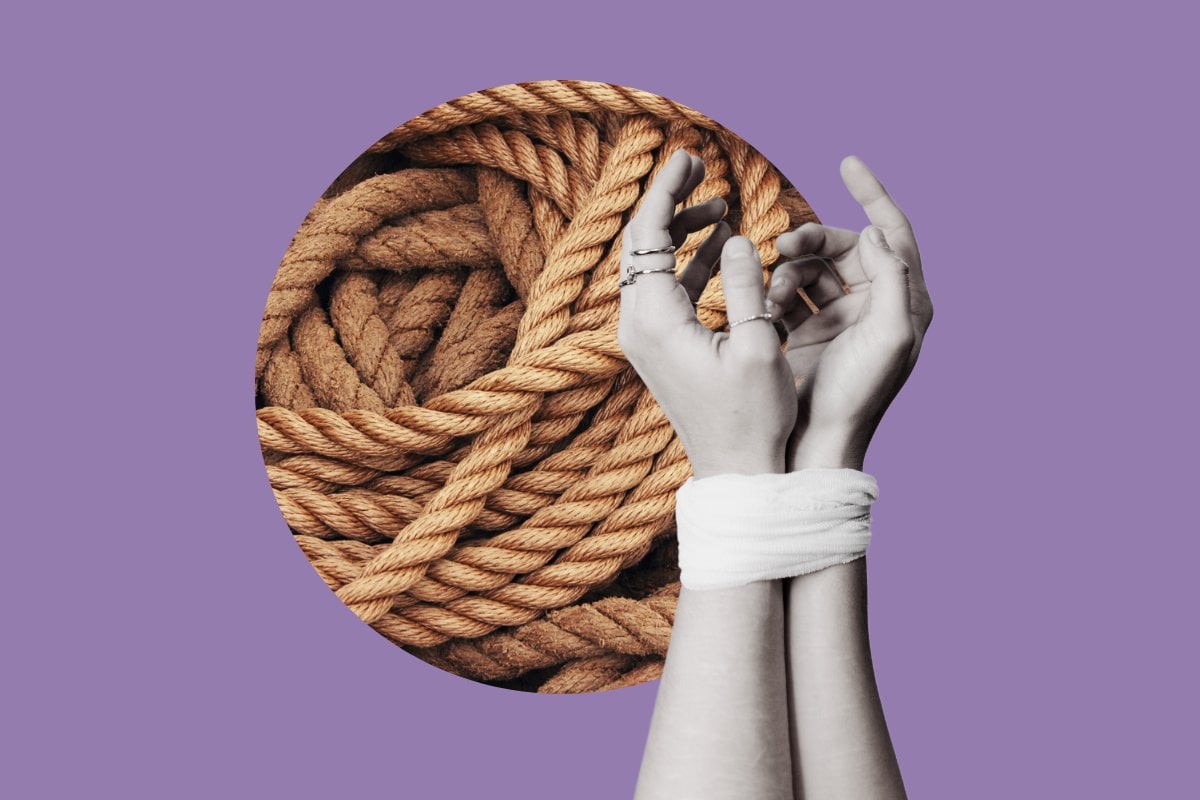 My mind suddenly spiralled, full of naughty thoughts and fantasies.

I’d been vibrating at the highest sexual frequency since I’d met Dan at a sex club two nights before. We’d started chatting at the bar, his hands exploring, before he took me on a couch and up against the glass window.

Back at his, we hadn’t stopped, going again and again until I was sore.

Since then, I hadn’t been able to stop thinking about my wild Saturday night – my first time at that kind of kink party.

By 10am on Monday, I’d already made myself come three times from the thoughts alone.

“Lingerie or...?” I messaged back, my mind reeling.

“Yeah, surprise me,” he replied. “I want to explore your sexual fantasies like you’ve never done before.”

I had to pop out to the hardware store that evening, before we’d arranged to meet back at his at 9pm. I was shopping for sandpaper but somehow found myself in a completely different aisle.

Browsing their wide selection of ropes.

I picked up a white nylon, running my fingertips down its tight fibres, feeling the rough surface on my soft skin.

My mind lit up as I smiled to myself, carrying it towards the counter.

Within an hour I was on his doorstep, a short black dress covering up the black lace lingerie underneath.

A mesh bra, g-string, suspender belt, thigh-high stockings and patent black heels. But it wasn’t going to be the only surprise.

“I think I’m a little overdressed,” I smiled, glancing down my body.

With one step he had me up against the lounge room wall, his mouth making its way down my neck as his steady hands removed my dress. Letting it fall to the floor, he paused, taking everything in.

The air burned with sexual tension.

Turning my body around, he held me against the bricks as he undid his own belt. Then, with expert fingers, he moved my panties to the side, before pushing himself in.

I gasped, hands splayed across the wall, as he thrust from behind, and completely lost myself in the moment.

Afterwards, spent and ravishing, we ordered Japanese and ate sushi on the couch, still in my lingerie. But it wasn’t long before he looked at me again with that insatiable appetite.

Pulling me into his arms, he lifted me up underneath my bum and carried me through to the bedroom with my legs wrapped around his waist.

He threw me down, hunger In his eyes, and I knew the moment had come.

“My surprise,” I purred, leaning across the mattress to reach into my black bag of tricks. “I want you to hogtie me.”

Handing over the bundle of thick rope, I saw his eyes light up.

“Turn over,” he suddenly ordered, completely in control.

Rolling over onto my stomach, I felt him grab my arms, pulling them back behind me before winding the white nylon around my wrists.

Then, he took hold of my ankles, drawing them up so that my knees were bent.

Looping the long rope around my feet, he tied them so that they joined my hands, with all the expertise to suggest that he’d done this before.

Pulling the knot tightly, he tugged at his work, as I felt the material grate against my skin. This was going to be fun.

Lining my body up, he knelt over me from behind, as I pushed my bum back to meet him. The only part of myself I could still move.

Then, tied up and restrained, I gave up all control in a way I never had. Giving him permission to do what he wanted. However he wanted. I was his submissive.

Listen to this episode of Sealed Section. Post continues after audio.

Tugging at the rope to get deeper, go harder, he yanked at my hair, while facedown, I moaned loudly into the sheets.

It was primal and animalistic, like nothing I’d ever felt. And I was more turned on than I’d ever been before.

Straining against the ties that bound my body, I felt myself get closer and closer, as my clitoris swelled and gyrated against the mattress and he continued to pound me.

As his groans got louder, my ecstasy amplified, matching the speed of his movements.

Having little control over when I could come, one more push sent me over the edge and I exploded. Waves of shock and pleasure shot through my body as I felt him let go too, coming together just like the rope that tied me.

It was the greatest orgasm of my life.

R
rbk a month ago