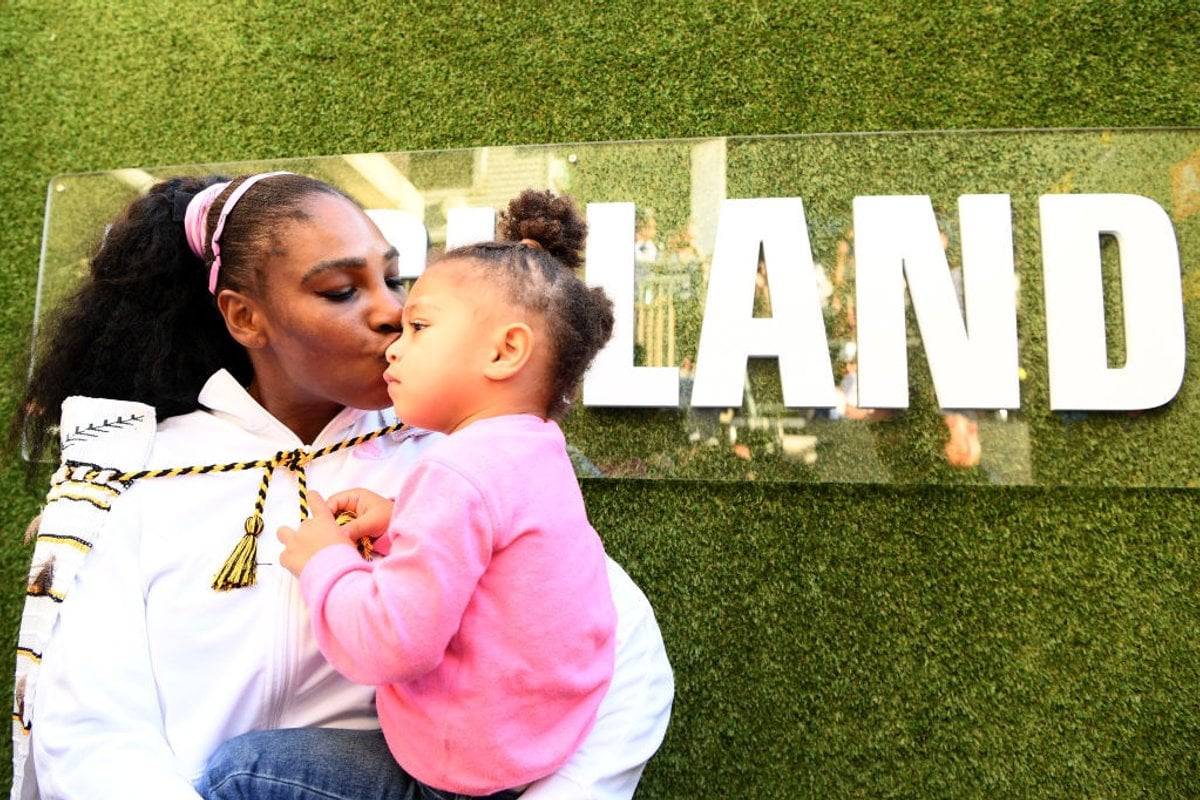 In a compelling essay published by Elle Magazine this week, tennis icon Serena Williams writes about the birth of her daughter Olympia, and the traumatic aftermath that almost ended her life. She describes how black women are three times more likely to die during or after childbirth than their white counterparts in the US, and how listening to black women can for some, be the difference between life and death.

After years of gruelling training and competition to push her body to its absolute limits, Serena enjoyed a much more relaxed way of life during the latter part of her pregnancy.

“I settled into a whole new way of being,” she writes in Elle Magazine.

“I was relaxed not playing: my life was just sitting at home, and it was wonderful. I still had plenty of work to do, but my focus narrowed to keeping myself healthy for the baby.”

Serena took classes on breathing techniques to ready herself for the birth. She initially put doctors off when they wanted to induce her labour, but checked into hospital on August 31, 2017 for an induction.

“Contractions started shortly after that, and it was great! I know that’s not what people are supposed to say, but I was enjoying it, the work of labour. I was completely in the moment. I loved the cramps. I loved feeling my body trying to push the baby out.

“I wasn’t on an epidural; to get through it, I was using my breath and all the techniques I’d learned from birth training (I had taken every birthing class that the hospital had to offer).”

The next morning, Serena was still pushing and her baby’s heart rate was dropping with every contraction. Nurses instructed her to roll onto her side, but after several more challenging hours as the contractions got faster and harder, her doctor took action.

“By this point, I was more than ready for the epidural, but after 20 minutes, the doctor walked in, looked at me, and said, ‘We’re giving you a C-section.’ She made it clear that there wasn’t time for an epidural or more pushing.

“I loved her confidence; had she given me the choice between more pushing or surgery, I would have been ruined. I’m not good at making decisions.

“In that moment, what I needed most was that calm, affirmative direction. Since it was my first child, I really wanted to have the baby vaginally, but I thought to myself, ‘I’ve had so many surgeries, what’s another one?’

"Being an athlete is so often about controlling your body, wielding its power, but it’s also about knowing when to surrender.

“I was happy and relieved to let go; the energy in the room totally changed. We went from this intense, seemingly endless process to a clear plan for bringing this baby into the world.”

In a 2018 article for Vogue, Serena tells how her husband Alexis Ohanian cut the cord after the emergency c-section and says that as they placed her tiny daughter on her chest, “it was an amazing feeling.”

Serena writes that she worried she hadn’t felt an instant connection to her bump, but it all changed the moment she held her baby girl.

“I loved her right away. It wasn’t exactly instantaneous, but it was there, and from that seed, it grew. I couldn’t stop staring at her, my Olympia.”

It was the next day when Serena felt short of breath that things went badly wrong.

“So much of what happened after that is still a blur,” she writes.

“I may have passed out a few times. In my haze, I wondered if I should ask someone about my drip. In 2010, I learned I had blood clots in my lungs—clots that, had they not been caught in time, could have killed me. Ever since then, I’ve lived in fear of them returning. It wasn’t a one-off; I’m at high risk for blood clots. I asked a nurse, ‘When do I start my heparin drip? Shouldn’t I be on that now?’

“The response was, ‘Well, we don’t really know if that’s what you need to be on right now.’ No one was really listening to what I was saying. The logic for not starting the blood thinners was that it could cause my C-section wound to bleed, which is true. Still, I felt it was important and kept pressing.

“All the while, I was in excruciating pain. I couldn’t move at all—not my legs, not my back, nothing.”

The pain caused Serena to start coughing which burst her C-section stitches. She was sent back into the theatre to repair the damage, but it was far from the end of her ordeal.

“Little did I realise that this would be the first of many surgeries. I wasn’t coughing for nothing; I was coughing because I had an embolism, a clot in one of my arteries.

“The doctors would also discover a hematoma, a collection of blood outside the blood vessels, in my abdomen, then even more clots that had to be kept from travelling to my lungs. That’s what the medical report says, anyway. To me, it was just a fog of surgeries, one after another.”

It was while recovering from this second operation and feeling like she was dying, that Serena found the strength to talk to her nurse and ask for further investigation because of her history of blood clots. It took multiple requests before they took her seriously.

“Finally, the nurse called my doctor, and she listened to me and insisted we check.

“I fought hard, and I ended up getting the CAT scan. I’m so grateful to her. Lo-and-behold, I had a blood clot in my lungs, and they needed to insert a filter into my veins to break up the clot before it reached my heart.”

It was only after this fourth and final surgery that Serena realised just how unwell she had been. She had a good relationship with her personal obstetrician, but says she barely saw the other doctor who was supposed to be checking up on her. She had to fight hard while vulnerable and unwell, simply to be heard.

“In the U.S., Black women are nearly three times more likely to die during or after childbirth than their white counterparts.

“Many of these deaths are considered by experts to be preventable. Being heard and appropriately treated was the difference between life or death for me; I know those statistics would be different if the medical establishment listened to every Black woman’s experience.”

Seven days after Olympia’s birth, Serena and Alexis could finally take her home. The trauma inflicted on Serena’s body left her struggling to even walk a few metres down the driveway, but thankfully her recovery didn’t prevent her from bonding with her baby daughter.

“I went from not being able to really imagine her in the womb to us being completely inseparable.

“I still feel like I have to be around her for every day of her life, as much as possible. I’m anxious when I’m not around her. Honestly, it’s a little much!”

Serena's essay, published in the April edition of Elle Magazine is adapted from Arrival Stories: Women Share Their Experiences of Becoming Mothers, an anthology collected by Amy Schumer and Christy Turlington Burns, out April 5.