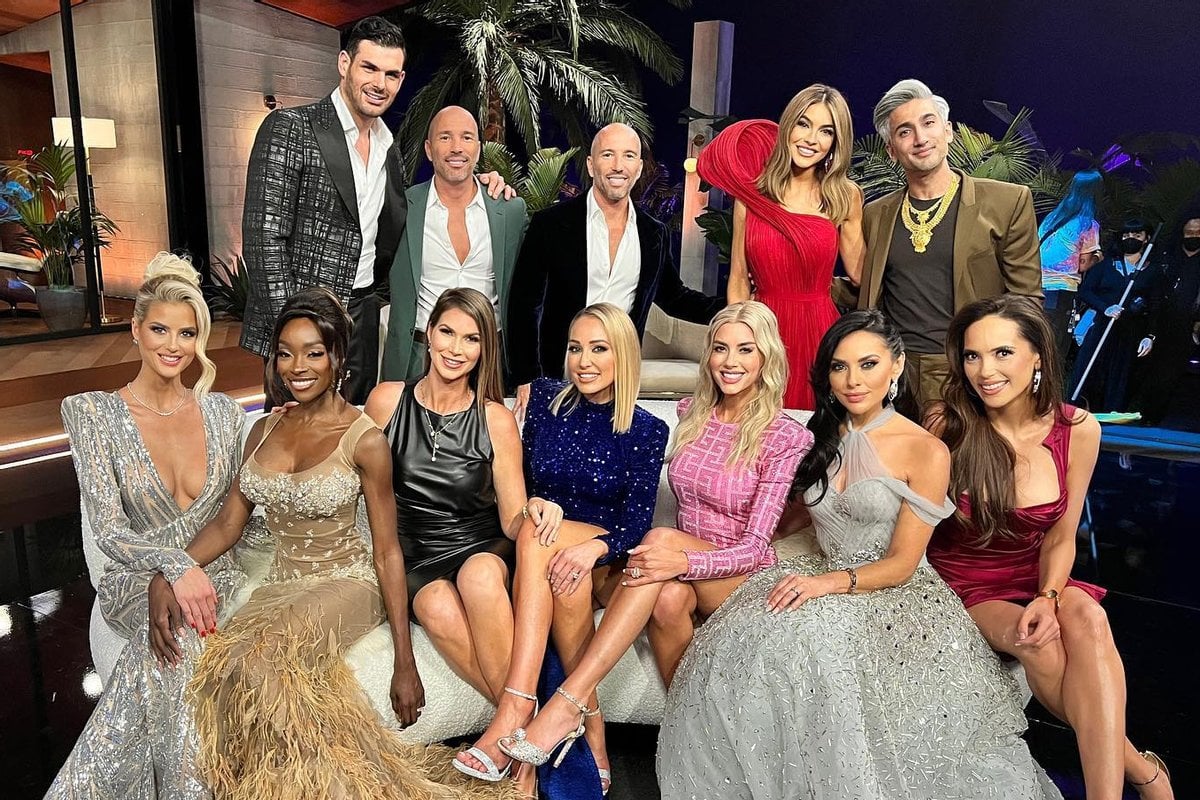 After another drama-filled season, the cast of Selling Sunset has returned for their first reunion.

In the special, which aired on Netflix on Friday, the agents, brokers and Romain sat down with Queer Eye's Tan France to unpack season five and discuss life, relationships and friendships post-filming. And there were some serious bombshells dropped.

Here are the 10 biggest moments from the Selling Sunset reunion.

Need a refresher before we get into it? Here's the Selling Sunset season five trailer. Post continues after video.

After months of speculation, Chrishell Stause confirmed her relationship with Australian singer G Flip during the reunion special.

When host Tan France asked the reality star, 40, if she was dating anyone, Chrishell spoke publicly about the 27-year-old musician, who is non-binary and uses they/them pronouns, for the first time.

"I recently have been spending a lot of time with someone that's very important to me. Their name is G Flip," Chrishell said, before explaining she "was probably as surprised as anyone".

"Nothing's really changed for me," she said.

"I'm still very attracted to masculine energy and a good human. I heard people talk about these things and they're like, 'I knew from a young age.' That's not me. I'm just, I'm very open to good energy."

Chrishell explained the relationship began when she was asked to be in the musician's music video, which was briefly played during the special. 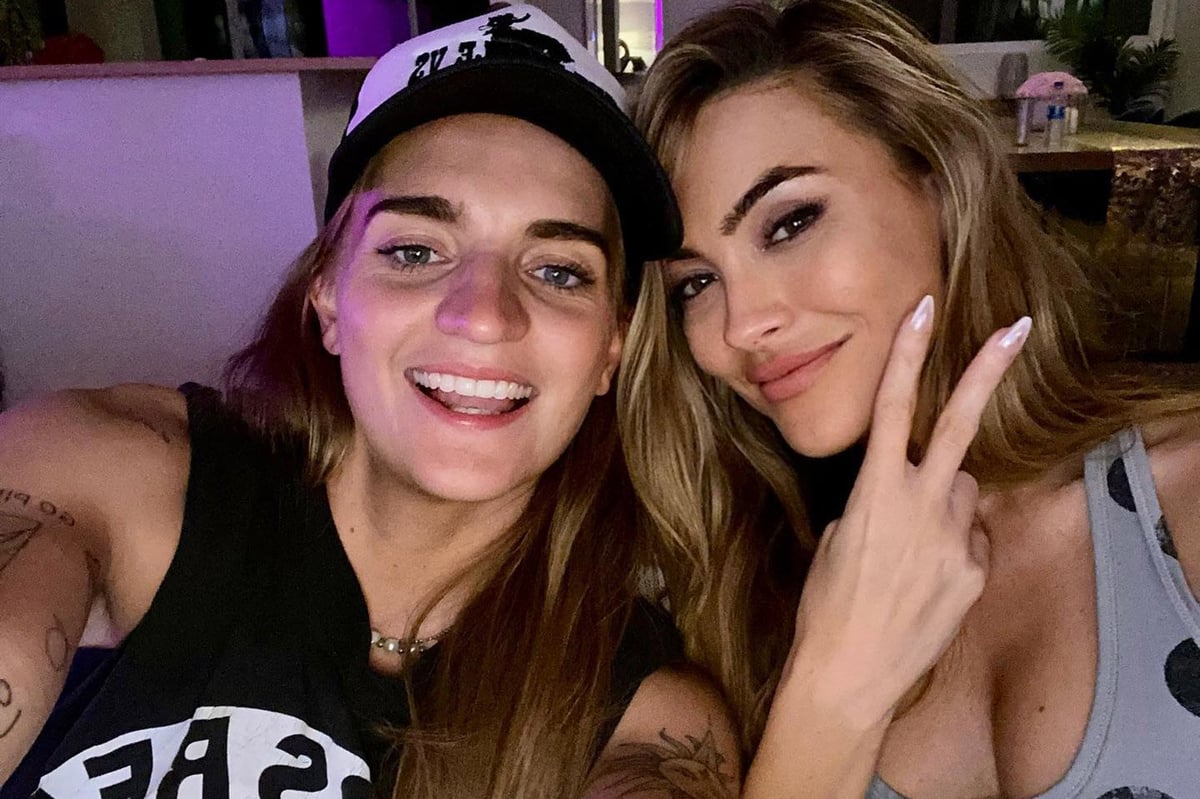 She added that she still wants to be a mother, but she isn’t putting as much pressure on herself.

"I, you know, had this serious relationship [with Jason] and obviously, I am hoping to have a family but I’ve also taken some of the pressure off myself as far as what that looks like," Chrishell said.

"I don’t necessarily have to have the child myself - [I’m] open to adoption, things like that. And so I’m just kind of enjoying right now and having a lot of fun and dating."

When Jason was asked for his reaction, he responded: "They seem like a badass, for one. And two, the smile that's been on your face for the last couple [of] minutes makes me very happy. So I'm proud of you."

For someone who doesn't show much emotion on the show, Jason Oppenheim got quite choked up about his breakup with Chrishell during the reunion special.

When replaying the season finale, tears welled up in Jason's eyes.

During the special, an unseen clip was played, showing Oppenheim talking about the breakup with Mary Fitzgerald, admitting he "f**ked up".

"I think the more I thought about [having children], I went into the other direction. I just felt like this is not the time in my life when I want to have a family," he said. 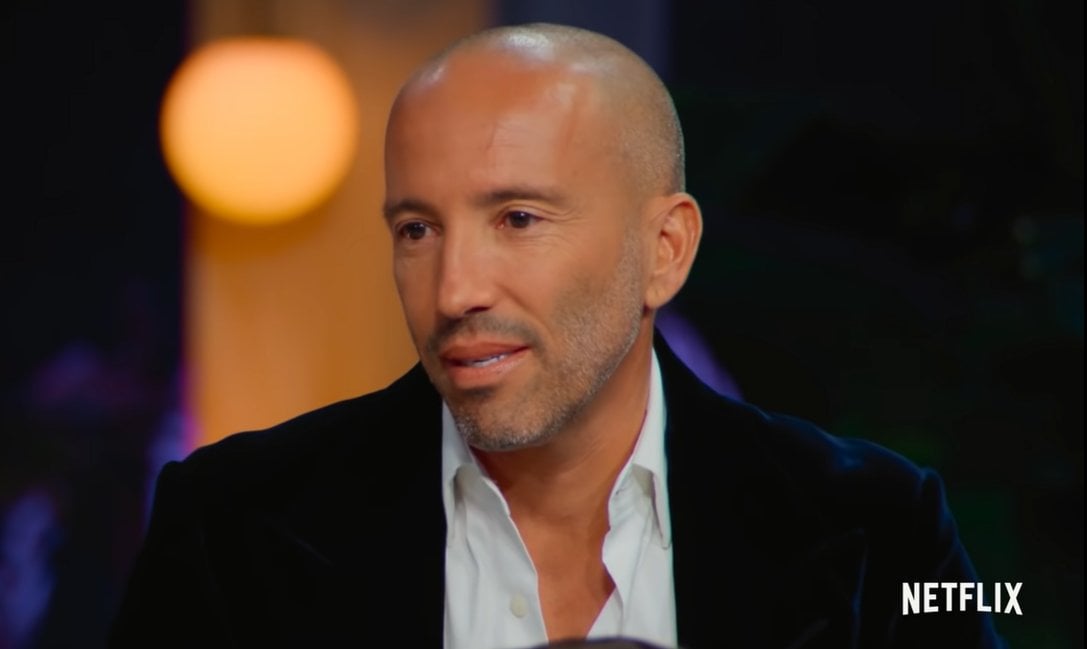 "I feel like I f**ked it up. I also feel guilt. We were happy and [I] f**ked something up that was really good, and she’s in pain and I caused that," he said, before calling Chrishell "the love of my life."

"And now I have to deal with her being happy with someone else and I’m probably never going to meet someone like that again. So it f**king sucks."

The real estate boss also admitted that he "didn’t handle the breakup as well as I could have" as he "shut down a little bit emotionally" to make it easier.

3. Christine and Amanza were absent.

Both Christine Quinn and Amanza Smith were not in attendance after they both allegedly tested positive for COVID-19.

Amanza made a brief appearance via video chat.

On the other hand, a rep for Christine previously told TMZ that "she tested positive for COVID on Saturday and out of an abundance of caution, she did not attend the reunion."

Christine's rep also told the publication that producers offered her the opportunity to video chat in for the reunion, but she declined as she wasn't feeling well enough to do it.

When TMZ asked Mary if she believes Christine tested positive, she said: "I mean, me personally? No, because we all tested on Tuesday and again on Friday."

In a tweet, Chrishell also alluded to Christine lying about having the virus.

When TMZ posted the photos on Twitter, Chrishell replied with a GIF saying: "And the lie detector determined it was a lie".

4. The commission rates you see on the show aren't what the agents receive.

Towards the end of the special, Tan France spoke about how loaded the cast must be because of the insane commission rates shown for each property in the series.

However, the cast confirmed the rate you see on the show isn't actually what they receive.

"So the commission we see on the show you don't get?" Tan said, to which Mary shook her head.

"Every agent has a commission split with their broker/brokerage," Jason confirmed, before Chrishell said that they don't get a bigger cut than the agents.

5. Maya opened up about her stillbirth.

During season five, Maya Vander was pregnant with her third child. But when the cameras stopped in December 2021, Maya experienced a stillbirth at 38 weeks.

At the reunion, Maya detailed what happened and how she is now.

"Apparently it was a freak accident. We got the autopsy report about a month ago," she said. "It was just a bad accident with the cord mixed with some swallowed placenta."

"But I'm getting much better," the realtor continued.

"I have two beautiful children and I'm very lucky and thankful for that, but I also lost one. So that void is still there and I think part of my healing is getting pregnant again and I really hope I will."

Read more: Maya was pregnant while filming Selling Sunset season 5. Before the show aired, she lost her baby.

6. Heather spoke about having children.

Heather Rae El Moussa has been open about her IVF journey on her social media, and shared more details about it during the reunion.

She explained that she froze her eggs a few years ago, as she wasn't sure she wanted to have her own kids. But now married to Tarek El Moussa and raising his two children, she's changed her mind.

"As I fell more in love with [Tarek's children] and my husband, I started thinking about wanting to create something with him and wanting to have a child of my own," she said.

Heather explained she went through another round of egg freezing and created embryos, then confirmed they have two very strong embryos.

She also noted they know the sex but aren’t announcing anything at the moment.

After receiving a promise ring from her British boyfriend Tom in season five, Vanessa Villela confirmed the couple are engaged.

She shared they are getting married in "130 days" and the wedding will take place in Los Angeles.

8. The bribe from Christine really happened.

Season five ended with some tension between Emma Hernan and Christine Quinn, after Christine allegedly offered Emma's client $5,000 to not work with her.

During the reunion, Jason confirmed it actually happened, saying he's since spoken to the man Christine offered money.

"We’ve texted and we haven’t really addressed this situation," he said.

Jason also said that "right now, there’s not a place for [Christine] at the Oppenheim Group".

"In the future, if she takes real estate seriously, if I can get an understanding of her perspective of things, if she changes her behaviour, if she brings in a big listing, there's a lot of reasons where I would consider her having a place at the Oppenheim Group, but I have to say, right now, there isn’t a place."

9. Emma and Micah are not dating.

Despite getting close during season five, Emma Hernan confirmed she is not dating LA developer Micah.

“[We have] a flirty, you know, connection," she said before calling him a "good friend."

Emma is, however, still spending time with her ex-fiancé, Peter Cornell, the man who was also linked to Christine.

"I’m single, I don't have to answer to anybody. I'm living my best life. I might spend time with my ex. It might be fun," she said.

"We have not been boyfriend/girlfriend since I called off the engagement, however, have I've doubled it and went back for seconds? Yes. It doesn't mean we're dating. I could go on a date tomorrow and that could be my future husband."

At the end of the reunion, Tan France asked the Oppenheim brothers about their Orange County office, before announcing there is another show from the brokers heading to Netflix.

In the final minutes, they played the trailer for Selling The OC, and it looks just as drama-filled (if not more) than the original show.

Watch the trailer for Selling The OC here: