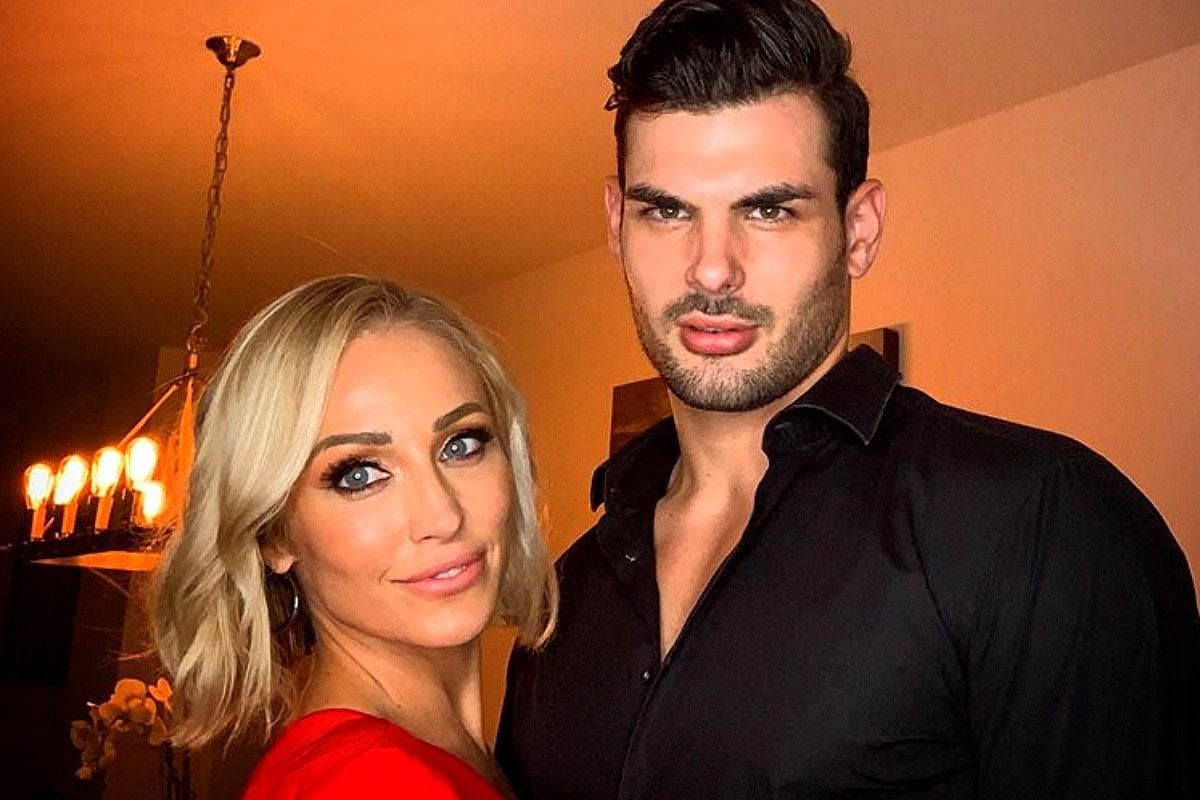 If there's one thing all reality TV viewers know to be true, it's that what happens off-screen is often much juicer than we're led to believe.

It's certainly the case with Selling Sunset, the hit Netflix series centreing on the personal and professional lives of the people who work at the Los Angeles based real estate firm the Oppenheim Group.

Ever since the three seasons of Selling Sunset dropped on Netflix, it's been one of the most-watched reality TV shows of 2020, with viewers as interested in the intricate lives of the Oppenheim employees as they are in drooling over the luxurious homes they sell.

With a fourth season of Selling Sunset on the horizon there have been plenty of rumours swirling around the fate of the show, whether the company is about to split in two and allegations that the storylines are all fabricated for the cameras.

According to Selling Sunset stars Romaine Bonnet and Mary Fitzgerald, viewers are only treated to a small taste of the show's biggest storylines.

The newly married couple were guests on Mamamia's daily entertainment podcast The Spill and set the record straight on the drama leading up to their wedding, co-star Chrishell Stause's surprise divorce and what to expect from season four.

Listen to Selling Sunset stars Romaine Bonnet and Mary Fitzgerald talk about the show's juiciest behind the scenes stories on The Spill. Post continues after podcast.

Ever since Selling Sunset hit our screens there have been allegations that the stars of the show don't really work in real estate and that the drama and relationships we see on the show are fabricated for the cameras. Is there any truth to that?

"It’s all real, but they really edit everything down," Mary told The Spill. "There’s a lot more that happens then what everyone sees, but the main thing is we don’t fight every day, we’re not that dramatic.

"No one wants to watch us just sitting in our office silently working, so they just edit it down to the most entertaining parts.

"It would also be very easy for anyone to verify our legitimacy because our licenses are all hung with the department of real estate. You can easily look online and see what we’ve sold. It’s very easy to verify it, so whenever people say our jobs aren’t real, I just laugh."

If so many of the storylines are cut out of Selling Sunset, what's the one scene you're most surprised viewers didn't get to see play out on screen?

"For season three it was going in to see the doctor about freezing my eggs, because we actually filmed the entire thing," Mary said. "They were all in the room with me and it was very graphic and very detailed because they were there with me for all the tests and the ultrasound.

"All those scenes of both me and Heather were cut out. All because there was so much going on with Chrishell and Christine (Quinn), so that was a bigger storyline that took priority."

One of your storylines centred around Romain's Las Vegas bachelor party where Brett and Jason Oppenheim rented a suite for the occasion and Mary was filmed being incredibly upset that women had come into the room and felt she had been lied to. Can you tell us what actually happened?

"Leading up to the wedding we had a whole week of me just basically yelling at everybody," Mary said. "I was so mad and I was yelling at Jason and Brett saying 'you got him in trouble!' They had that all on film and there was a resolution to this where you find out what really happened in Las Vegas but they cut it all out.

"So I get that people are still wondering about it, but he didn’t do anything wrong. He was just dumb."

"For the bucks party they booked out a huge suite and we put all the alcohol into one room," Romain explained. "Then after the nightclub they brought girls back but obviously wanted to get some drinks. Mary had told me before we went on the trip that she didn’t want any girls in my room, which I respected. But then they came in with me to get a drink and left after.

"So when Mary asked me about it, it was a week before the wedding and she was so stressed so I didn't say anything. That was my mistake, but I didn’t do anything wrong. It was the wrong choice I made not to tell her."

"But next time you’ll tell me, right?" Mary adds. 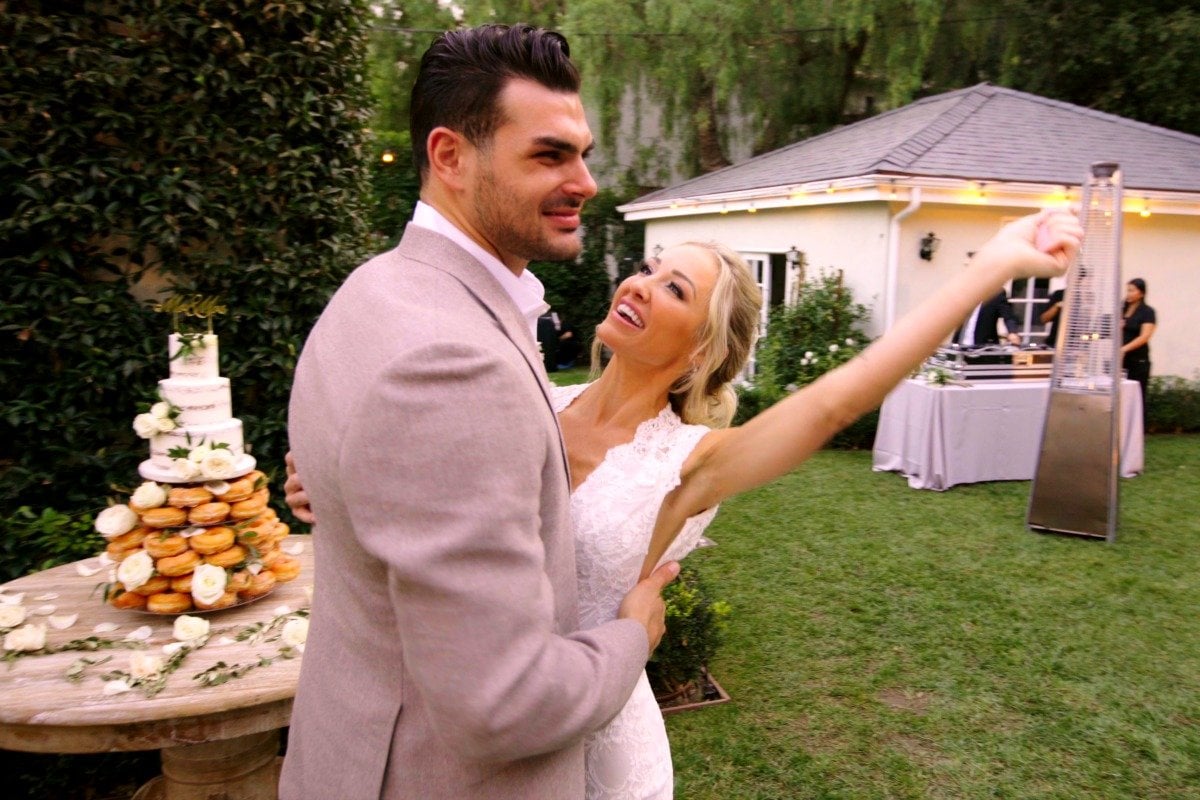 "Leading up to the wedding we had a whole week of me just basically yelling at everybody," Mary said. Image: Netflix.

One of the biggest Selling Sunset storylines involves Chrishell Stause being blindsided by a text telling her that her husband of three years, This Is Us actor Justin Hartley, was divorcing her. How did that play out behind the scenes and did you have any idea it was going to happen?

"We absolutely didn’t know that was going to happen," Mary told The Spill. "We were just as blindsided as Chrishell, maybe even more. They didn’t even show how shocked we all were on the show. When we heard we were all frantic.

"The night before it happened we were with Chrishell at a charity event," Romain added. "Where she was gushing about her husband."

"She actually texted me that morning," Mary said. "Right before it happened when I was still mad at Romain for the whole bachelor party thing.

"So that morning Chrishell texted me and Amanza (Smith), who was going through stuff with her kids, and she said 'I’m so sorry, I didn’t give you guys enough attention with everything you’re going through but I’m here for you and I feel so bad'."

"She had no idea what was coming and 30 minutes after that, it happened. She got a text, and it said that Justin had filed for divorce. So I know for a fact she had no clue anything like this was coming. She was heartbroken and my heart still goes out to her.

"She's the strongest person I know, but that’s not easy for anyone to go through, especially in the public eye."

Mary, there's been a lot of interest in your on-screen feud with co-star Christine Quinn, where do the two of you stand now?

"Christine and I are better than we were before," Mary said. "We didn't speak to each other for quite a few months because there was just too much that had been said or done.

"Then I saw an article that had come out about her wedding and how disappointed she was with the way it was portrayed and I know how she gets. She gets very hurt and she lashes out.

"I know how she feels, so I reached out to her and the conversation went really well. We FaceTimed for an hour and a half, and dug into all the things that have happened in the past and we’re in a better place now.

"She was thinking her wedding was going to be an entire episode and I get that. They tell you 'this episode will be your wedding'. That's in your head, so when you see that your wedding is maybe seven minutes of a forty minute episode, and half of it was just fighting? It’s disappointing." 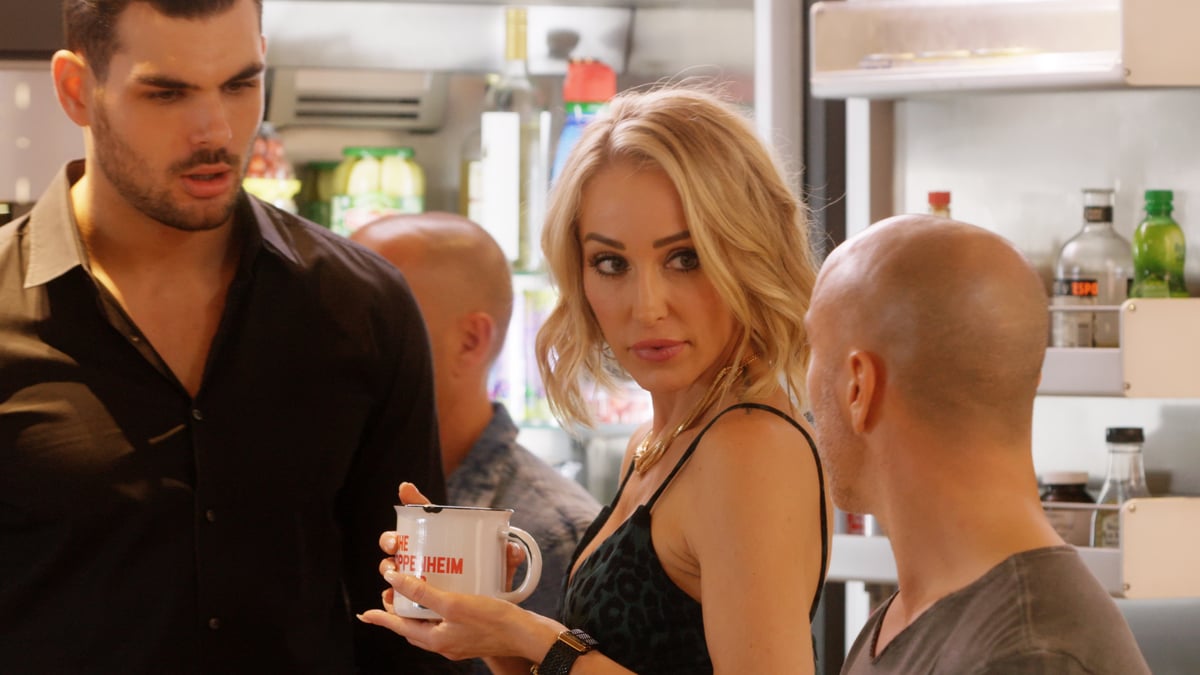 "It’s all real, but they really edit everything down," Mary told The Spill. Image: Netflix.

Finally, the biggest storyline going into season four is that Brett is leaving The Oppenheim Group to start up his own rival brokerage and some of the Selling Sunset cast are going with him. What's actually happening?

"It’s not as dramatic as all the press are saying," Mary said. "He did hang his license at his own brokerage but he is still very much involved in all of our lives and he’s still part of our family.

"Some of the girls were saying they were going to move over to him, but Brett’s not taking anyone on! I see all those headlines and I don’t even want to ask because honestly, it’s more drama.

"But all he’s done is hang his license in his own brokerage. He’s still involved with us and no one else is moving over with him."

You can watch all three seasons of Selling Sunset on Netflix.