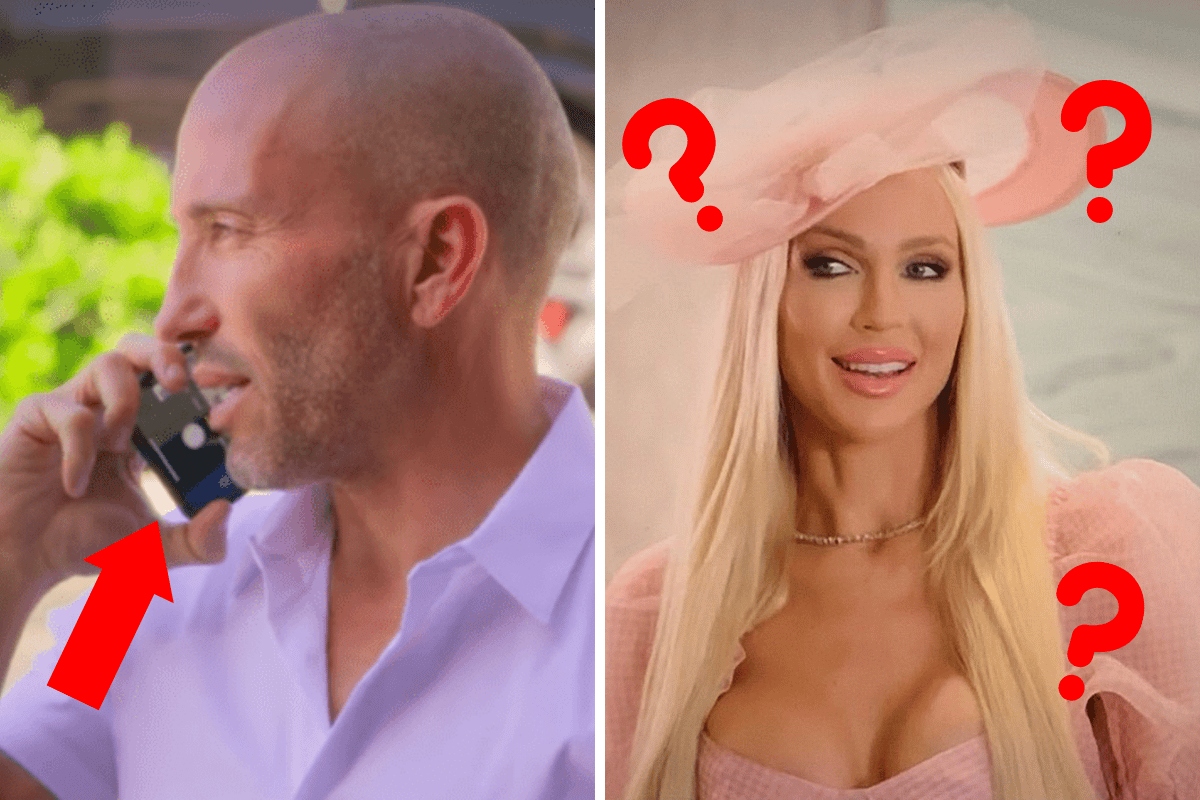 Selling Sunset is the perfect mix between impeccable real estate and the juiciest of drama.

However, what's a good show without a few *fake* storylines? Or perhaps, scenes?

Well, thanks to a fair few editing faux pas, the Netflix real estate show has made these fakies incredibly easy to spot.

We're not sure why, but it just kept happening, again and again.

So, here are five major edit fails from Selling Sunset that we need to talk about. Immediately.

When producers switched out a TV... for flowers? 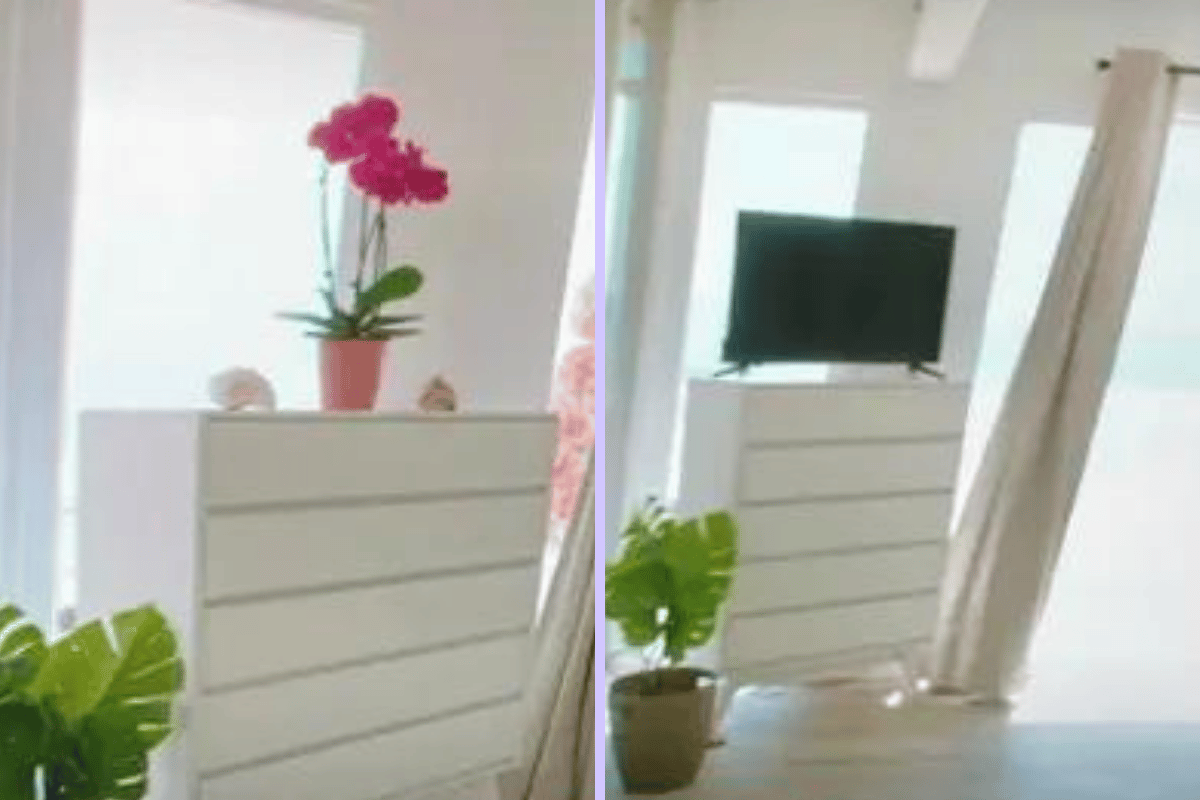 In Season four, newcomer agent Vanessa Villela met with Jason and Mary at her Los Angeles listing. The views, the renovations and the sheer size of the mini-mansion remained unimportant because WHY was there a TV on the dresser in one scene and then a random orchid in the next?

And why exactly did no one bother to double check all the scenes lined up before airing?

The producers are confused. Twitter is confused. We're all bloody confused.

Chelsea, we don't know how to tell you this... but there's something on your dress. 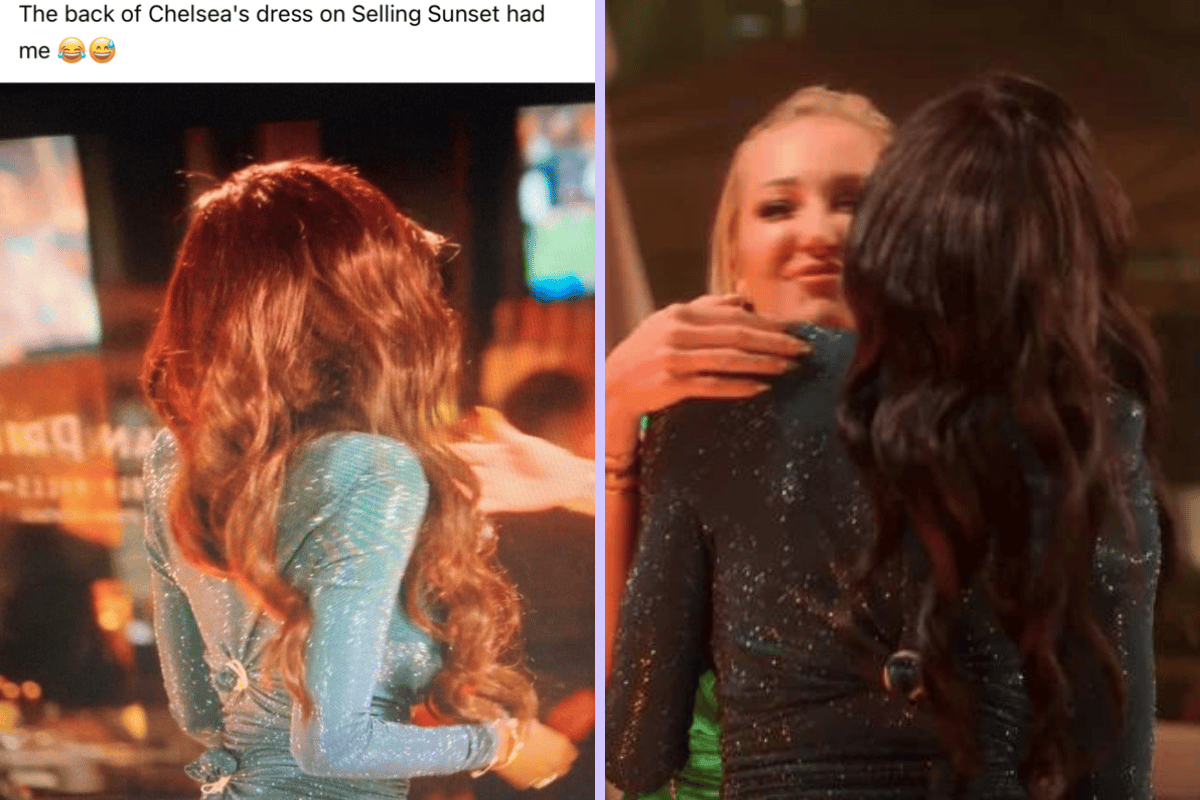 Not sure what exactly the editor of Selling Sunset were thinking? Image: Netflix / So Dramatic! Comuni-TEE Facebook Page.

Chelsea Lazkani, we have something we urgently need to discuss with you.

Are you aware there's rubber bands tied to the back of your dress? We're guessing you are, so just one more question... why?

The entire ordeal was shown at a dinner between Mary and Chelsea, and we're gravely concerned as to why she couldn't just pick another dress in her size?

And furthermore, WHY did no one think to cut this bit out?!?! Were there really not enough cameras to record, we don't know, a different angle perhaps?

Jason. Babe. We know you're faking that phone call. 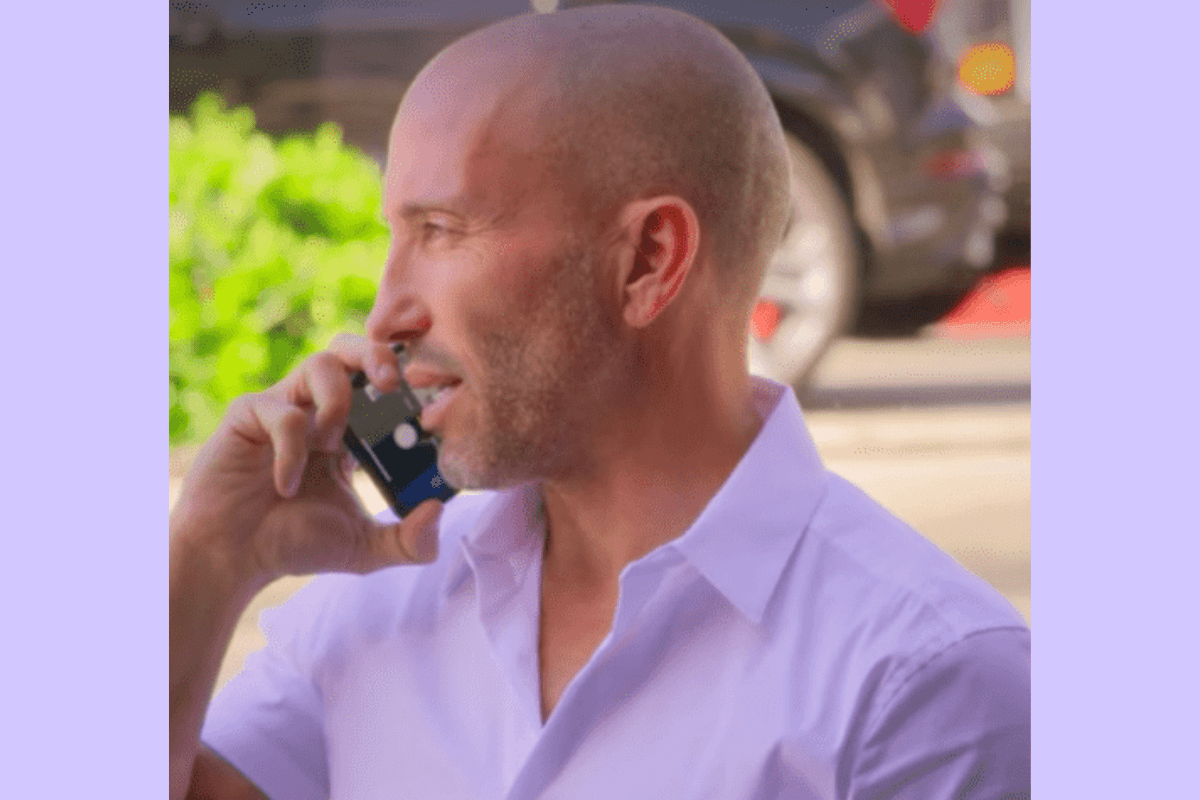 About 24 minutes into episode seven of season five, Twitter spotted a grave error.

Jason from The Oppenheim Group stepped out of the office to supposedly 'make a call to a client' but uhm, sweetie, we can see the camera app open on your phone.

Christine's hats are beautiful but like, don't switch them out mid-party? 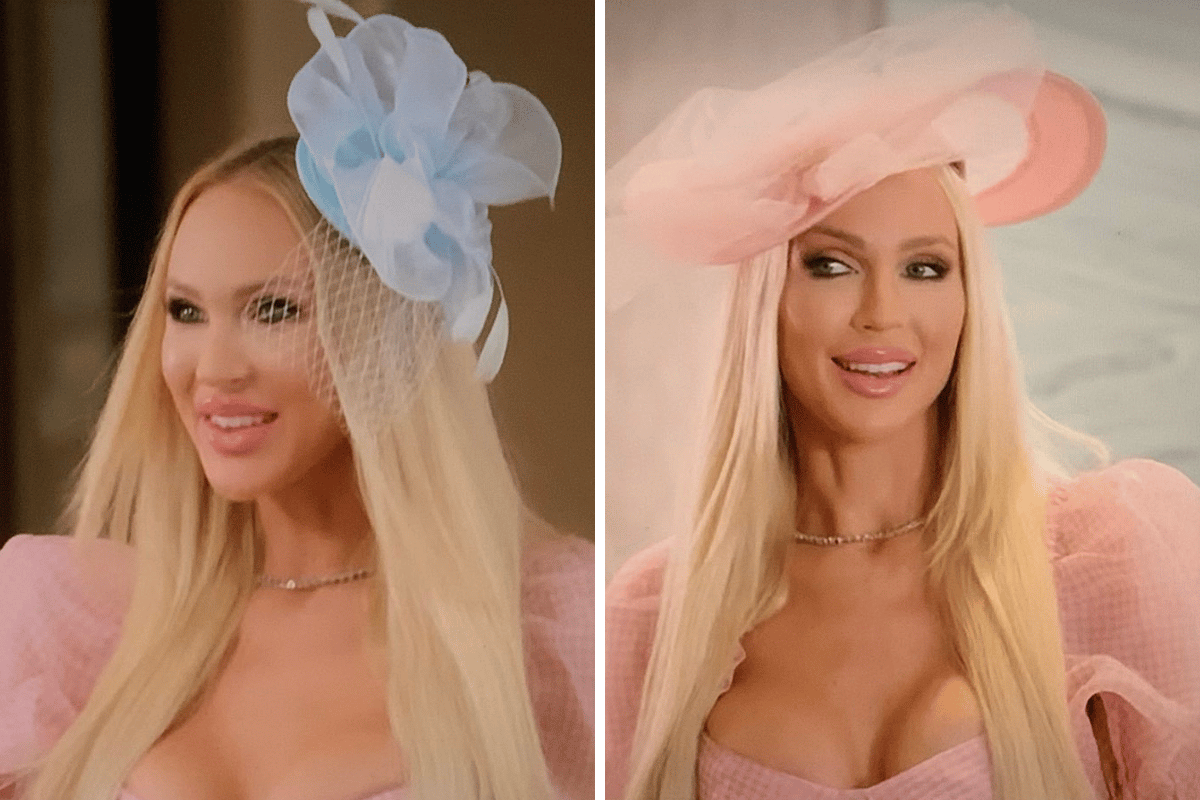 Halfway through Christine's tea party in season five of Selling Sunset, she made the bizarre decision to swap from a blue hat to a pink hat.

We need to know what exactly caused her to switch in the middle of filming, and why exactly Netflix producers even let this occur?

Remember when everyone thought Christine was doing yoga like three seconds after having her baby? 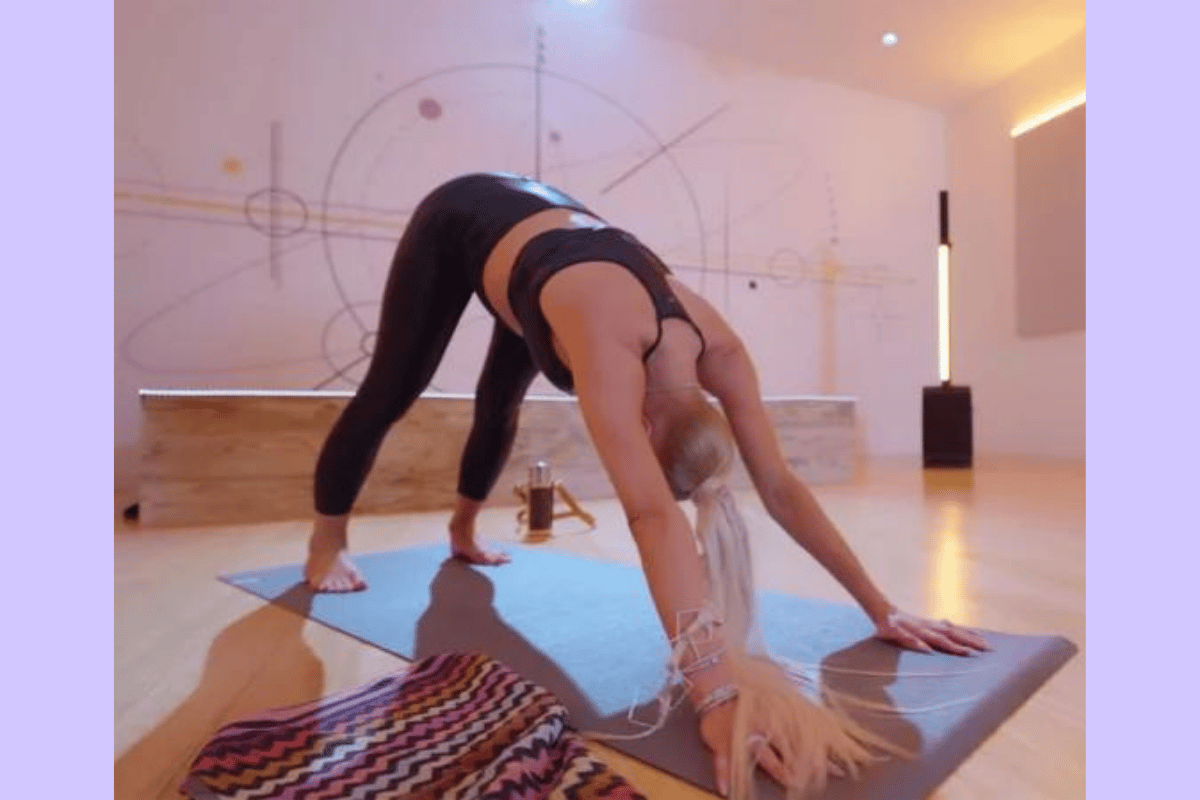 We will NEVER forget how Twitter exploded after watching this. Image: Netflix.

Just a few days after giving birth, our beloved Christine shocked literally everyone watching Selling Sunset at home when she was shown doing intense yoga moves in front of her friend Davina Potratz.

Everyone had questions, so many in fact that she later made a statement clarifying that she actually filmed those scenes while she was still pregnant with her baby.

Christine even went on to say that cameras purposefully filmed in a way so they wouldn't show her baby bump. Which is odd, because no one is having a baby and then doing a downward dog three minutes later.