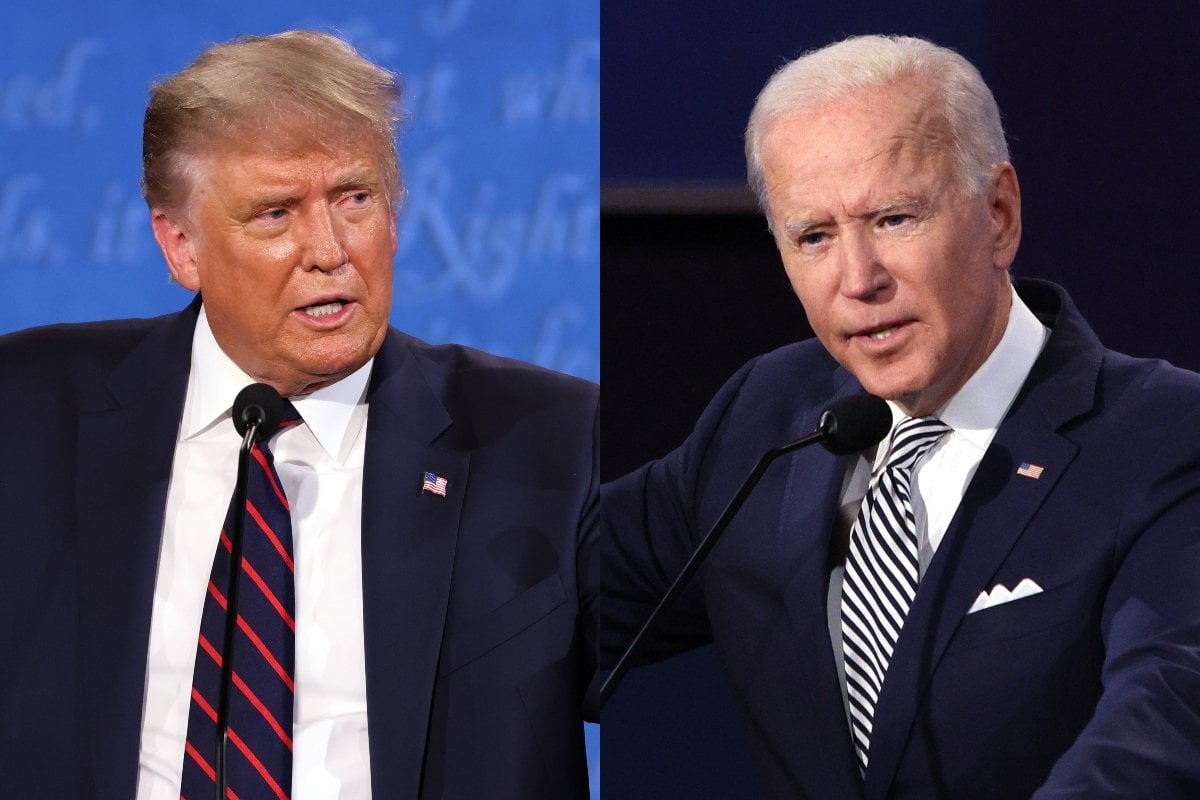 As unfortunate as it may be given their first go, United States President Donald Trump and former Vice President Joe Biden are scheduled to meet twice more for presidential debates ahead of the November 3 election.

Debates were set for October 15 and 22, but a lot has happened in the 10 days since debate one: namely, Trump's coronavirus diagnosis and hospitalisation late last week.

Watch: Trump and Biden in the first US presidential debate. Post continues below video.

This week's vice presidential debate between Mike Pence and Kamala Harris ramped up measures, just slightly, with plexiglass screens erected on stage to separate the candidates - both of whom tested negative for COVID-19 ahead of the event.

Then on Thursday (Friday AEDT), the Commission on Presidential Debates announced the second presidential debate will feature the candidates virtually rather than onstage together.

Given 2020, that doesn't sound too out of the ordinary. But not everyone was happy (guess who!)

Just hours later, it appears that debate is now... not happening.

It's all very confusing, and we mostly just feel bad for the poor people at the commission who are no doubt having a really fun day at work.

This is what we currently know:

The second debate has been scheduled to go ahead at Adrienne Arsht Center for the Performing Arts in Miami.

It was originally meant to take place at the University of Michigan, but it determined it wouldn't be safe to host the campaigns, plus so many journalists and guests during a pandemic. That makes... so much sense.

Anyway, after Pence and Harris' debate, in which the candidates were separated by glass panels and regularly shown in split screen shots, the Commission on Presidential Debates clearly realised... this could definitely just happen over Zoom.

So, it announced a plan to go virtual.

The Second Presidential Debate will be VIRTUAL, @debates says ! pic.twitter.com/W3ZXKVLEbO

The debate would remain 90 minutes long with no commercial breaks.

The moderator, C-Span political editor Steve Scully, and voters would still be in Miami.

Trump: "I'm not going to waste my time."

Trump was not at all pleased about the commission's plan, designed to keep others safe given the White House cluster that has infected at least 30 people so far including himself.

In a TV interview with Fox Business less than an hour after the commission's announcement, Trump said he was "not going to do a virtual debate".

"I'm not going to waste my time on a virtual debate" -- Trump, on with Maria Bartiromo, begins his first post-coronavirus interview by saying he's pulling out of the second debate. (He sounds a little hoarse.) pic.twitter.com/R43JSszfll

"I'm not going to waste my time on a virtual debate. That's not what debating is all about, you sit behind the computer and do a debate, ridiculous," Trump told interviewer Maria Bartiromo.

"And then they cut you off whenever they want. I don't think I'm contagious at all."

He said "the commission changed the debate style".

"That's not acceptable to us. I beat him in the first debate, I beat him easily.

"They're trying to protect Biden. Everybody is."

What has Biden said?

Pre-commission announcement, Biden said in a speech in Pennsylvania he didn't think the debate should still go ahead if Trump still had COVID-19.

"Too many people have been infected. It's a very serious problem," he said.

"So I will be guided by the guidelines of the Cleveland Clinic and what the docs say is the right thing to do."

While boarding a flight to campaign in Arizona on Thursday, after the announcement and Trump's Fox interview, Biden said it would be "irresponsible" for him to comment on Trump's debate decision.

"We don't know what the president's going to do," he said. "He changes his mind every second."

His deputy campaign manager and communications director Kate Bedingfield simply said in a statement Biden was looking forward to speaking to Americans, without mentioning the debate specifically.

"Vice President Biden looks forward to speaking directly to the American people and comparing his plan for bringing the country together and building back better with Donald Trump's failed leadership on the coronavirus that has thrown the strong economy he inherited into the worst downturn since the Great Depression," the statement said.

But things are moving fast... and now they've all booked other events for the same evening.

Wait, what? Both candidates have scheduled other events for the same day?

Given Trump's resistance, Team Biden suggested the second debate be delayed a week until October 22, which is when the third and final debate is already scheduled "so that the President is not able to evade accountability."

Trump countered, agreeing to the October 22 debate - but only if it was face-to-face - and asked for the third debate to be moved to October 29, just five days before election day.

Biden rejected an event that late in the campaign.

"Trump's erratic behavior does not allow him to rewrite the calendar, and pick new dates of his choosing," Bedingfield said.

Not long after, ABC News announced it would host its own town hall where Biden will answer questions from voters on national television in Philadelphia - in key battleground state Pennsylvania - on October 15.

But... will Trump even be recovered from the virus by October 15?

This feels like a... very important question. But no one knows the answer because we don't know exactly when Trump last tested negative for COVID-19.

If that were true, the president may have known he had contracted the virus, or had symptoms, as early as Wednesday, September 30. He met in person with officials in Minnesota on Wednesday and appeared at a fundraiser in New Jersey on Thursday.

This would also have meant he could've been infectious on September 29, during his first debate with Biden (who has tested negative multiple times since).

As this news started making headlines, a statement was released redacting Dr. Conley's initial comments with the claim he had "misspoken" and that Trump was only 24 hours into his diagnosis at the time of the press conference.

His doctors and the White House have also dodged questions about when Trump's last negative test was - which could mean he wasn't being tested as regularly as he should have been, or he tested positive earlier than the public was told.

Trump has been talking up his recovery, telling Fox Business he thinks he is "better" and would love to do a rally "tonight".

"I'm back because I'm a perfect physical specimen and I'm extremely young. And so I'm lucky in that way."

On the bright side, it sounds like we'll have at least another week to prepare for another 90 minutes of yelling, insults and interruptions.