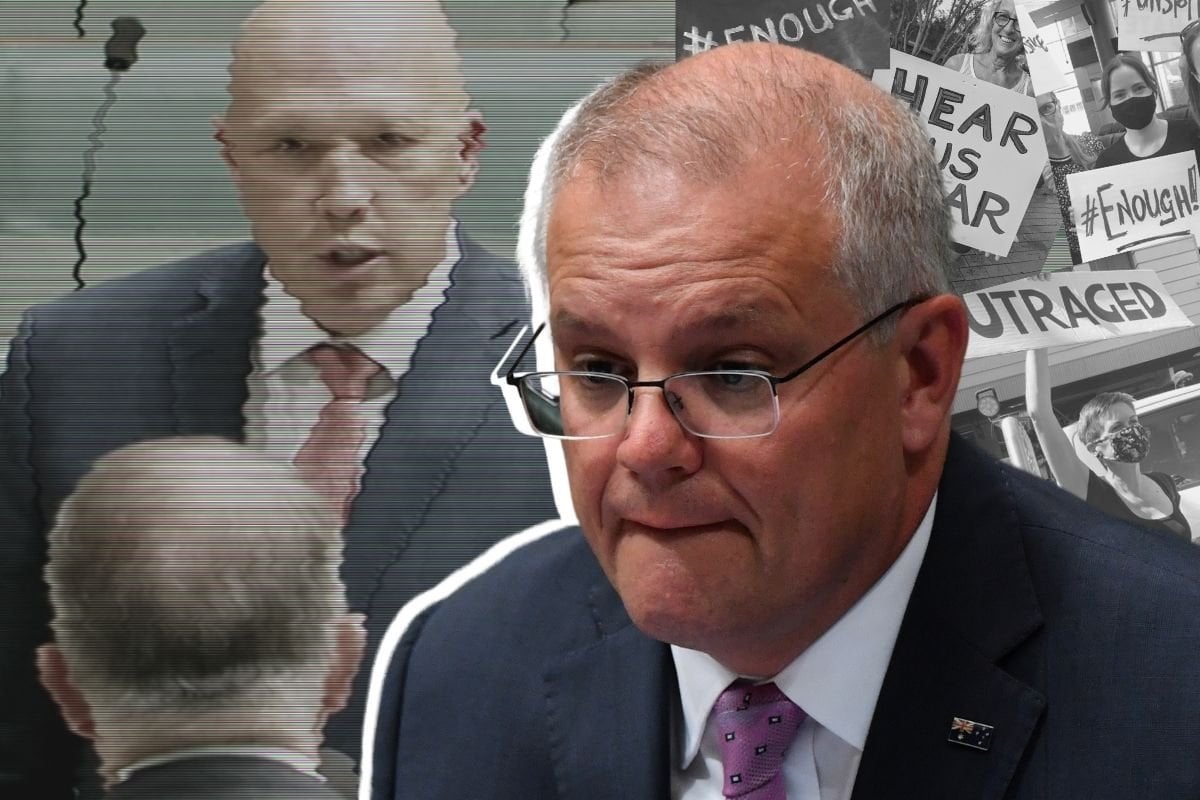 On Monday women and their allies marched in their thousands.

They made signs and chants and demanded to be heard. Demanded to feel safe. Demanded change.

In 42 towns and cities across Australia, there was a sense of empowerment and camaraderie in our combined anger, as women stood side by side and fought for rights as basic as fairness, equality, justice and respect.

Some politicians made an effort to stand and listen. It was multiple sexual assault and harassment allegations within their place of work that helped spark this movement, after all.

Labor leader Anthony Albanese was there. Deputy Labor leader Tanya Plibersek was there. Numerous MPs from all sides of politics were there. But not a single senior member of the Coalition turned up. Not even the Minister for Women.

Prime Minister Scott Morrison offered a private audience with the protest organisers, but they didn't want to meet 'behind closed doors'.

And then our Prime Minister got up in Question Time and said marches like the one unfolding yesterday were being "met with bullets" in other countries.

"This is a vibrant liberal democracy, Mr Speaker, not far from here, such marches even now, are being met with bullets, but not here in this country, Mr Speaker."

It was as though women should've been grateful that we weren't shot, while walking the streets to protest for our own safety and respect.

Dear @ScottMorrisonMP, the entire point of today’s #March4Justice is that women right around the nation want MUCH more than just not meeting bullets for asking to be heard. We’re seeking respect & decency & we won’t be quiet til we get it. (We won’t celebrate no bullets 🙅‍♀️) pic.twitter.com/SPTe9DI4vD

On Monday, the Morrison government gave varied reasons for their lack of engagement with what was happening mere metres away on the lawns of Parliament House.

"I'm not making any promises, but I'll see what I can do," said Deputy Prime Minister Michael McCormack, citing his 'full schedule' as an excuse.

But how can we believe that when not a single senior member of our sitting government walked the eight minutes across the forecourt to stand and listen?

How can we believe that when Labor Leader Anthony Albanese tried to take the protest demands into Question Time and several Liberal party members stood up and walked out of the chamber as he read them?

How can we believe that when Albanese started reciting Brittany Higgins' speech, and Home Affairs Minister Peter Dutton stood up and said, "I think the Leader of the Opposition has had a fair go, I move that he no longer be heard."

Have they been listening at all?

Astonishing. Scomo says women will be believed. Not only did they not walk outside the building to listen, they even gagged her words through the opposition leader.#auspol #qt pic.twitter.com/g4PmYj4Qox

Of course, Albanese's own party has faced allegations of sexual harassment and abuse. Anonymous complaints have arisen in a closed Facebook group, and when questioned about them, the Labor leader said simply that they were "very disappointing".

He also sought to distinguish between these “anonymous suggestions” and the allegations currently facing the Coalition, arguing that he needed claims against “specific individuals” to investigate.

But Scott Morrison is the leader of this country, and sometimes - like on Monday - you have to front up even if you know the reception isn't going to be all that pleasant.

And then, on Tuesday, Morrison was asked about his controversial "met with bullets" comment by the Opposition Leader Anthony Albanese.

"Does the Prime Minister regret that comment, particularly on the second anniversary of the Christchurch Massacre, conducted by an Australian citizen?" Albanese pressed.

He raised his voice asking "What issue does the leader of the opposition have with celebrating democracy and the right to protest, Mr. Speaker?"

Again, none of this is the point.

What no one wants is two men shouting about who is and who isn't worthy of office, rather than focusing on the significant issues at hand that demand our undivided attention.

Our Prime Minister is not listening.

In 1996 John Howard donned a flak jacket and faced an angry pro-gun mob as he moved to change gun laws in this country in the wake of the Port Arthur massacre.

The women of Australia aren't protesting a right to bear arms. They just want justice and respect. They want to feel safe. They want to be listened to. But instead of turning up, even for 10 minutes, Scott Morrison and his cabinet actively turned away.

So it's hard to believe the government when they tell us things are changing. But this week we witnessed women sharing their voices and realising their collective strength in a show of power many have been waiting decades to be a part of.

This picture. Brittany Higgins leading the #March4Justice. This is what change looks like. 📸: Getty Images pic.twitter.com/F5P1lfx3AC

The women of Australia have sent a clear unwavering message: they will not stop until they are listened to.

So prick up your ears Scott Morrison, we will be heard. This is only the start.

Reply
Upvote
Women have long been labelled 'difficult' by men whenever they raise their concerns.
The ways we can be passively difficult are endless. Let's start being really difficult.
A
anonymous a year ago