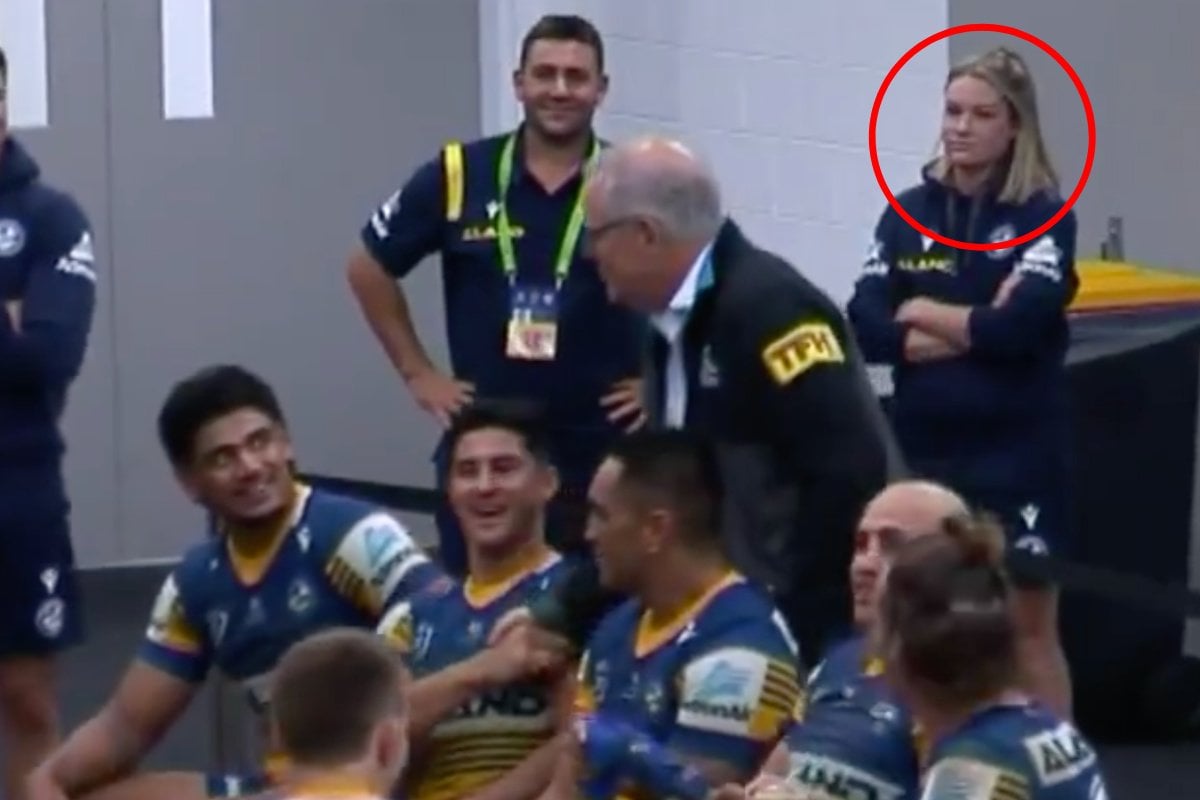 You may have seen that Scott Morrison was at the footy on Saturday night.

The Prime Minister of Australia took a brief relief from parliamentary affairs, currently engulfed in countless allegations of sexual misconduct, and attended Bankwest Stadium to cheer on his cherished Sharks who lost to the undefeated Eels in an injury-filled match.

After the final whistle was blown, Morrison was committed to showing sportsmanship and put aside his team’s loss to show up in the change room of the victorious Eels amid their boisterous celebrations.

As he stepped inside, the players gave him a rowdy welcome - a reception he likely hasn’t recently received amid plummeting polls thanks to his handling of issues affecting women in Parliament House and, more broadly, across the country.

Players seemed elated he was there, with one offering him a beer to skull. Morrison resisted, then took a small sip before placing it down. The men pumped their firsts in the air as they clapped and cheered him on.

But there was one person in that room who wasn’t so happy. A woman.

As cameras spanned the room, Scott Morrison is seen walking past a woman in the corner who had her arms folded, donning a look of contempt.

Her name is Tahleya Eggers and she is the sports scientist for the Paramatta Eels.

“She is all of us,” wrote a Twitter user under the name Social Kristancing.

His tweet was in response to an earlier tweet by Ladies Who League, who wrote: “I’m sick to my stomach. Scott Morrison doesn’t have time for women but has time to hang around with the Sharkies at the footy. I’m disgusted.”

She is all of us pic.twitter.com/SHLecsnPMX

“Proud to claim this one,” Eggers replied on Twitter.

“I will not respect a man who has the time to shake hands of men who have won a football match but is ‘too busy’ to attend the March for Justice.”

Eggers was referring to the Prime Minister’s refusal to go to the ‘March for Justice’ rally on March 15 when thousands of women gathered on the front lawns of Parliament House to protest against the sexual assault, discrimination and harassment of women in this country.

The sports scientist’s tweet received thousands of likes, before she deleted it and put her account on private.

There was some speculation on social media that she was pressured to delete her comment, however the Eels have denied this.

Given she was pressured to remove her post, I would like to encourage all to repost on @tahleya_eggers behalf.
“I will not respect a man who has the time to shake hands of men who have won a football match but is ‘too busy’ to attend the #March4Justice” #auspol @samanthamaiden pic.twitter.com/64nUVZb2Du

Sydney Morning Herald reports Eggers does not want to provide further comment and has been asked to direct all media inquiries back to the Eels.

The Prime Minister has faced mounting pressure in the past month to enact meaningful change to ensure a safe working environment for women in politics, as allegations of misconduct continue to surface.

In an interview with Ray Hadley last week, Morrison said: “I’m just glad the footy’s back on. It helps everybody.”

Reply
Upvote
Yet there are women out there who love him

Reply
Upvote
1 upvotes
@flyingdale flier Do you keep this comment saved so you can cut-and-paste it ad nauseum to articles in order to obliquely blame women for men being crap?

Reply
Upvote
13 upvotes
Blokey, everyman 'Scomo' ensuring his 'boys' are still gonna vote for him. We know where his priorities lie, once this all goes away.  Eggers has more integrity in her little finger than he does

Reply
Upvote
4 upvotes
@anonymous He was at the football, talking to footballers, seems pretty appropriate to me.
He made time to talk to the women, they refused to turn up.

Reply
Upvote
4 upvotes
@snorks  Oh no,  HE refused to turn up, he wanted it on HIS terms, just so typical of Mr Control Freak.

Reply
Upvote
@gypsy you do get the irony of that don't  you?

Reply
Upvote
2 upvotes
@snorks  No I do not, he could  have ‘lowered himself’ even if it is in his own mind only and met with  them outside. He is just another man, nothing special trust me. He doesn’t mind meeting with Fire fighters and footballers in their territory for a photo moment,
News
General
Opinion
True Crime
Politics
Sport
Explainer
Entertainment
Celebrity
Reality TV
Movies
TV
Books
Rogue
Royal
Lifestyle
Beauty
Fashion
Weddings
Home
Wellness
Health
Fitness
Travel
Food
Parents
Before The Bump
Pregnancy
Baby
Kids
Teens
School
Parent Opinion
Work & Money
Money
Finance
Career
Lady Startup
Relationships
Sex
Dating
Separation
Friendship
Family
Real Life
Couples