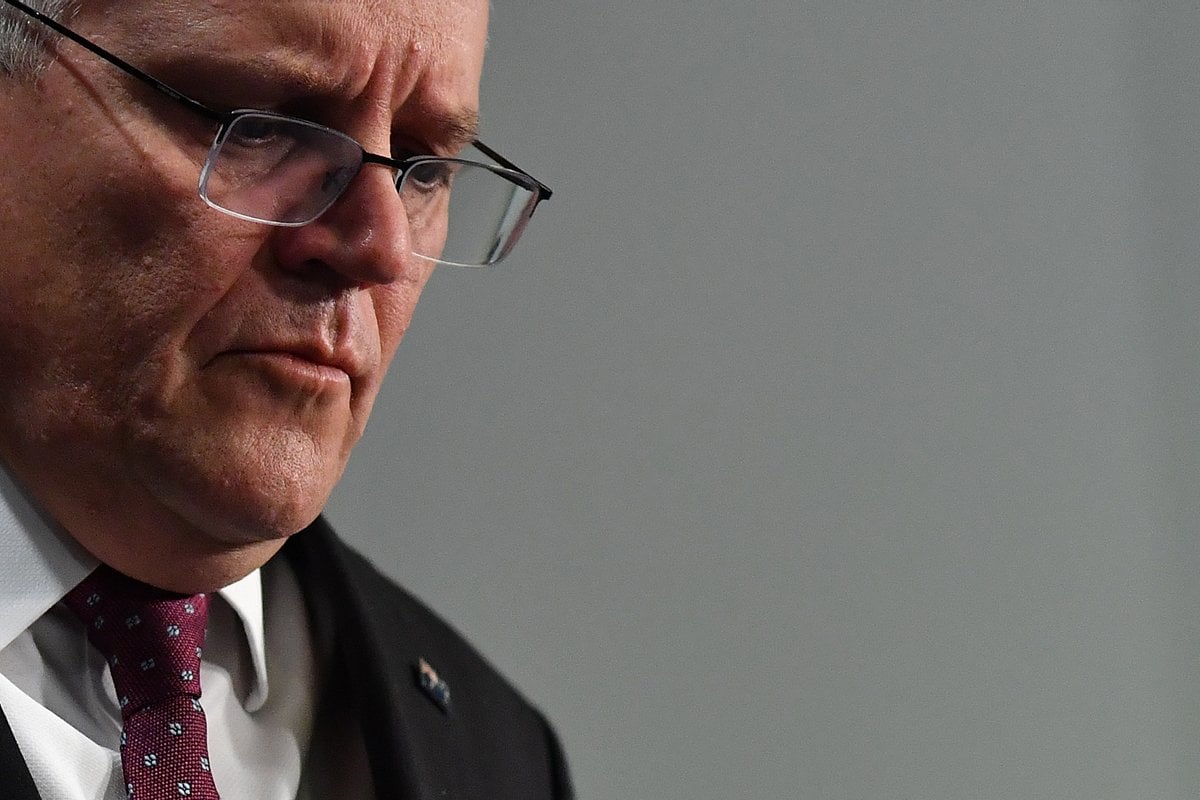 Prime Minister Scott Morrison was on the verge of tears on Tuesday morning as he expressed his disgust at the treatment of women in Parliament House, however said "today was not a day" for him to provide a list of actions that will change the sexist culture.

The press conference follows new revelations that a Coalition staffer performed a sex act inside the office of a female Liberal MP. The male was sacked on Monday night after Channel 10 broke the story.

Here are five moments you may have missed from the press conference.

Scott Morrison said he was "shocked and disgusted" at the parliament staffers who performed lewd sex acts on the desks of female MPs.

He told the media he will meet with all Coalition staff later on Tuesday to discuss behavioural issues.

"We must get this House in order. We must put the politics aside of these things, and we must recognise this problem. We must fix it," he said.

Scott Morrison close to tears talking about the women in his family.

The Prime Minister became emotional when explaining the important influence the women in his family have on him.

Morrison faced criticism for his response to Brittany Higgins' rape allegation last month, after he said his wife "clarified" the gravity of the incident when she asked him to consider if this had happened to his daughters.

On Tuesday in Canberra, the Prime Minister said, "people might not like the fact that I discuss these with my family... but this is how I deal with things."

Watch: Scott Morrison talks about the women in his family. Post continues below.

He continued: "I have the deepest of vested interests. Criticise me if you like for speaking about my daughters, but they are the centre of my life."

"They have motivated me my entire life, they have taught me the values and the faith has sustained me every single day in this job. Which is why I am here, I owe them everything.

Scott Morrison on what he's learnt about women's lived experience.

After acknowledging the criticism he has received in the past month, Morrison said he has "been doing a lot of listening over this past month".

He shared exactly what he has learnt about women's lived experiences in this country.

"Women are too afraid to call out bad behaviour for fear of losing a job in the workplace. That is not OK, it is not their fault, it is the environment we have allowed to be created," Morrison explained.

"Women who are afraid to walk to their car from the train, and they carry their keys in their hand like a knife. For fear of being attacked. That is not OK. That is not acceptable. In this country, our country as great as Australia, women walk daily with that fear."

He went on to say he has recently learned that women are often "overlooked and treated like they have nothing valuable to contribute" and that women are frequently intimidated, belittled, diminished and objectified in the workplace and elsewhere.

"That is not OK," he repeated.

When asked by Sky News' Andrew Clennell if he had lost control of his ministerial staff, the Prime Minister deflected the question by bringing up an HR complaint at News Corp.

"Right now, you would be aware that in your own organisation that there is a person who has had a complaint made against them for harassment of a woman in a women's toilet. And that matter is being pursued by your own HR department," Morrison said.

The Prime Minister then warned journalists about how they report on the incidents that occur inside Parliament House.

"You are free to make your criticisms and to stand on that pedestal, but be careful," he told media.

Labor's Kristina Keneally went on Sky News following the press conference and claimed the Prime Minister had "outed" the woman by making her allegation public knowledge.

"Did he have that woman's consent to do that?" Keneally asked. "Was he speaking with her consent?"

"did he have that woman's consent to do that? Was he speaking with her consent? What was he doing?"

Scott Morrison says "today is not a day for me to list further actions."

One journalist pointed out that it has been over one month since Brittany Higgins' rape allegation, and asked the Prime Minister why it has taken him so long to express his shock and disgust at women's lived experience.

"This has been a terribly difficult month. I was shocked and appalled when I learnt of the situation involving Brittany Higgins," Morrison responded.

"But as the month has progressed, and as I will engage with so many women, what has become the issue, and rightly, is that this is not just about the terrible things that have happened to one woman in this place.

"We moved immediately to start addressing issues around that particular case but this is far bigger than that and I think that is the voice that has arisen over the course of this past month. This was a shout about what is happening across Australia, not just the specific events."

He went on to assure women of Australia that he has heard them.

Despite the assurance, he said: "Today is not a day for me to list further actions."

It is unclear when that day will come.

Reply
Upvote
1 upvotes
Crocodile tears, good card to pull out when all else is failing. Really, that man is so predictable and shallow and then ‘the best form of defence is attack’ makes up a lot of rubbish and has to apologise for it later. This is our Prime Minister, he is a bumbling baffoon.

Reply
Upvote
@rodina  And the Logie goes to,  the one and only, Scummo.