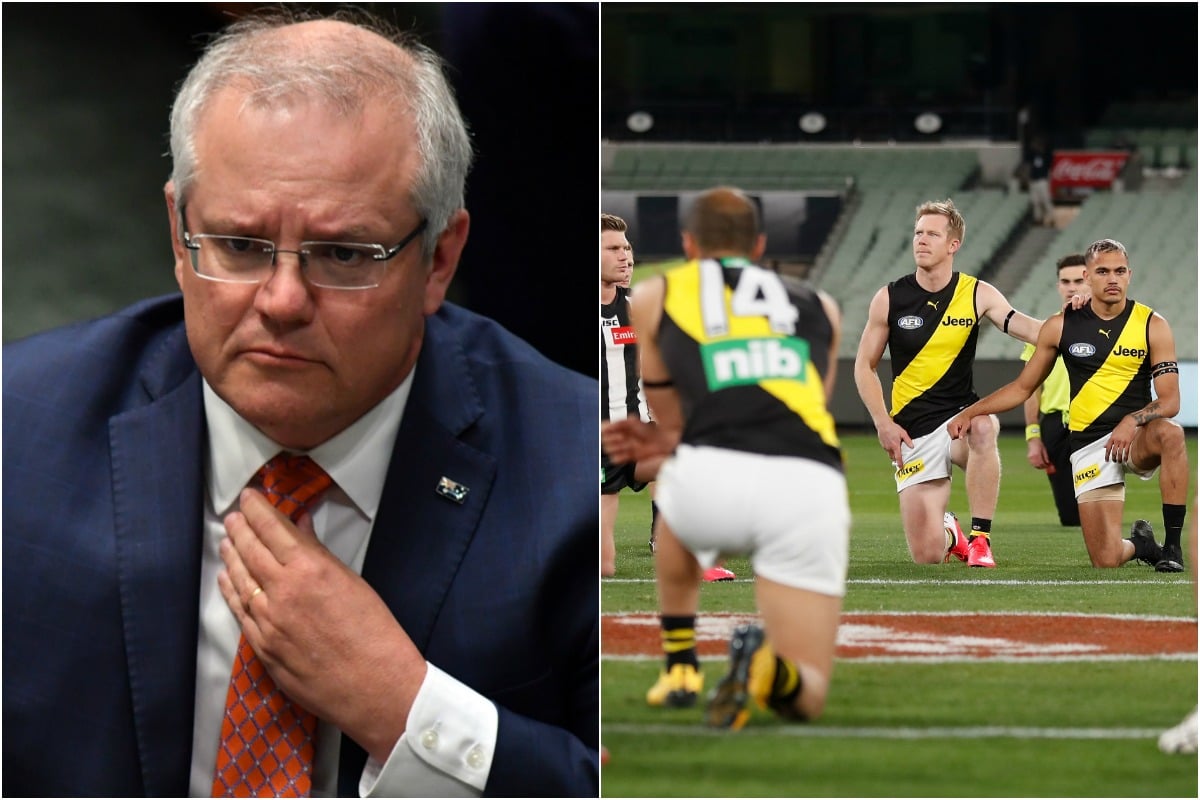 A "four-square-metre rule" from July and everything else we learnt from Scott Morrison's latest update.

In a Friday press conference, Prime Minister Scott Morrison gave state premiers and chief ministers an ultimatum on reopening borders, saying states that want to bring international students in, cannot do so unless they let all Australians in.

Morrison said there was a very robust discussion with his state and territory counterparts this morning about border closures that was very "constructive". 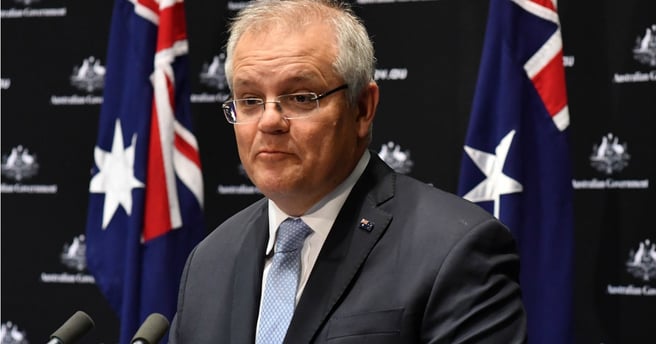 "I anticipate states will be working through those decisions in the next few weeks. And they'll come to their own conclusions, but what is important, whatever date that is, that it is nominated as soon as possible because that will enable the travel and tourism, and hospitality industry to plan for that time."

On the comments he made yesterday (which you can read in full below) in regards to Australia having no history of slavery, Mr Morrison told reporters the comments were in regards to how NSW was originally settled and "were not intended to give offence and if they did I deeply regret that and apologise for that".

PM says his comments on slavery were about how NSW was originally settled.. "my comments were not intended to give offence and if they did a deeply regret that
and apologise for that"

He also made the point that Australia has always made a point of "acknowledging" the "issues" in our history.

"We need to address them... personally I have been heavily invested in these issues," he said.

On the topic of social distancing, the prime minister said Australia is "on track" to meet stage 3 restrictions in July.

Morrison says that a “four-square-metre rule” will replace the 100-person cap for anything from funerals, to weddings, to gatherings.

Despite the desire for more relaxation, Morrison was steadfast in his desire for planned Black Lives Matter protests to not go ahead this weekend in Sydney and Melbourne.

"On the rallies and protests that are planned for this weekend… ethical advice hasn't changed.

"The medical advice is that this is an unsafe thing to do. It puts not only your own health at risk, but it puts other people's lives at risk," he said.

Scott Morrison claims there's "no history of slavery" in Australia.

“People wanting to take (the protests) further this weekend are showing a great disrespect to their fellow Australians,” Scott Morrison told 3AW yesterday, calling the rallies a "double standard".

In another interview with 2GB, the prime minister claimed there was no history of slavery in Australia while trying to discuss the same issue.

"Prime Minister Scott Morrison asserted in a radio interview that 'there was no slavery in Australia'.

"This is a common misunderstanding which often obscures our nation’s history of exploitation of #FirstNations people and Pacific Islanders."https://t.co/UKlTHs2sCy

"Australia at the time of colonisation was a pretty brutal place, but there was no slavery… I think what we’re seeing with some of these protests, they start on a fair point when they’re raising issues about … people’s treatment in custody or things like that.

“Fair issue… but now it’s being taken over by other much more politically driven left wing agendas, which are seeking to take advantage of these opportunities to push their political causes," he told the broadcaster.

Morrison followed up his claims with the comment: “I’ve always said we’ve got to be honest about our history.”

While Australia was not a "slave state" like America, this country did very much have slavery. Some 62,000 Melanesian people were brought here and enslaved to work in Queensland's sugar plantations between 1863-1904.

First Nations people also experienced slavery in the cattle industry, with employers "buying and selling" Aboriginal workers amongst each other. There were restrictions on their freedom of choice and movement. There was cruel treatment and abuse, control of sexuality, and forced labour - the very definition of slavery.

AFL players 'took a knee' for Black Lives Matter at the MCG.

As Collingwood and Richmond players warmed up for last night's season re-opener, every single player wore a black shirt and later took a knee in solidarity with the Black Lives Matter protests.

The umpires were also involved in the movement, which happened around the centre circle less than five minutes before the siren sounded.

“There were discussions (on Wednesday) and came from the playing group that both teams felt strongly about,” Magpies chief executive Mark Anderson told ABC Radio.

Players take a knee to support the Black Lives Matter movement before the 2020 AFL Round 02 match between the Collingwood Magpies and the Richmond Tigers at the Melbourne Cricket Ground. Image: Michael Willson/AFL Photos via Getty.

“Certainly both our clubs are endorsing and supportive of our players doing that and they’ll do that just before the bounce. We strongly support them doing so.”

The move was to pay tribute to the 2016 protest by San Francisco 49ers quarterback Colin Kaepernick, who refused to stand during the American national anthem for an entire season.

The peaceful protest cost him his career, and was largely ignored and ridiculed - especially by President Donald Trump.

A man who attended a Black Lives Matter protest in Melbourne last Saturday has tested positive to COVID-19.

He developed symptoms 24 hours after the event, and was "potentially infectious" at the rally.

Victorian Chief Health Officer Professor Brett Sutton said the case was "unlikely" to have been acquired at the protest due to the short time frame of the man being symptomatic. 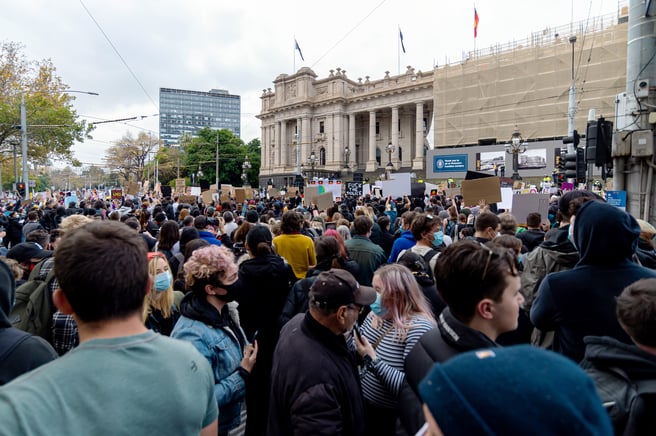 A significant investigation is underway into the man's movements - he wasn't wearing a mask at the protest.

More than 10,000 people gathered in the city's CBD during the demonstration.

More restrictions eased across the country.

As of tomorrow, NSW is reopening gyms, dance, yoga and pilates studios, indoor pools, saunas, tattoo and massage parlours and food courts. Up to 20 people are also allowed at indoor and outdoor gatherings from Saturday.

On Monday, the Northern Territory will no longer require interstate travellers to undergo 14 days quarantine.

South Australia is preparing to today outline a greater relaxation, with border measures possibly on the agenda. Increased number limits for large gatherings is also expected to be announced.

Victoria won't be increasing indoor and outdoor gatherings from 20 to 50 until June 22, with an increase from 50 to 100 not expected until late July.

Lawyers challenging the Queensland government's constitutional right to keep the state's borders closed amid the coronavirus crisis are set to return to court.

Billionaire businessman Clive Palmer, and a group of tourism operators named Travel Essence, launched separate proceedings in High Court after the borders were closed in March.

Currently, school students, workers and freight drivers can enter the state without an issue, but Queensland is closed to anyone else because of COVID-19. 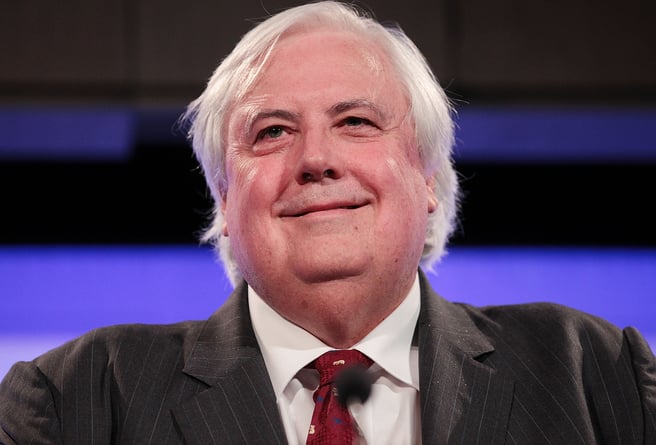 She has flagged a potential September re-opening, however, this is under a monthly review and could be pushed forward.

Animal abuse on the rise due to lockdowns.

The Royal Society for the Prevention of Cruelty to Animals has revealed the number of cruelty reports from March to May increased 16 per cent compared to last year.

Freckle was living in a small cage on a concrete floor, with nothing but a hard-wooden box to sleep on. No bed or blankets. No food or water. No toys. You can help neglected animals like Freckle this winter by making a tax-deductible donation today https://t.co/zVavKlWXe9 pic.twitter.com/Td2X8WRkpc

The increased animal abuse during the pandemic has been linked to earlier reports of family violence.

RSPCA Victoria said that cruelty to animals may occur alongside other forms of violence.

"Numerous studies have confirmed that in households experiencing domestic violence where companion animals are present, there is also a high probability of animal abuse."

- India has reported a record new 10,000 virus cases with the country being swamped by rising infections.

- Russia's recorded more than 500,000 infections with 8700 recorded in the past day. Despite the increases, the country partially reopened its border this week in a bid to reboot its devastated economy.

- One of the four former Minneapolis police officers awaiting trial in the death of George Floyd, has been released on AUD $1,084,400 bond, in part crowdfunded by the public. Thomas Lane is accused of helping to hold the unarmed black man down while Derek Chauvin lent on his neck.

- Retired Australian teacher Garry Mulroy is appealing his conviction in Cambodia for indecent assault against minors,  after the prosecution also said it would appeal the verdict and the leniency of his sentence.

- Queen Elizabeth has taken part in her first public video conference to mark Carers Week, with the 94-year-old and her daughter Princess Anne taking part in the call.

Reply
Upvote
4 upvotes
It would be really great if people who want to lead the country actually knew a little bit about the history of Australia. We had slavery. They just had to go about it a bit differently by the time Australia was settled, because loading up human beings onto boats and shipping them from Africa to the colonies had fallen out of favour. If we had of been settled at the same time as America, we most probably would have had African slaves here, too.

Reply
Upvote
3 upvotes
@laura__palmer australia didn't need slaves, as we had convicts to do the work.
G
guest2 2 years ago

Reply
Upvote
2 upvotes
@laura__palmer it would be really great if people knew about the history of slavery, so the guilt could be shared.   Between the 1400s and 1900s, approximately 14 to 17 million slaves were sold from the continent of Africa, throughout the world. The Arab slave trade existed up until the 20th Century.   Guess who kidnapped and sold those poor buggers into slavery?   It wasn't the despised white man.
M
mamamia-user-391653937 2 years ago