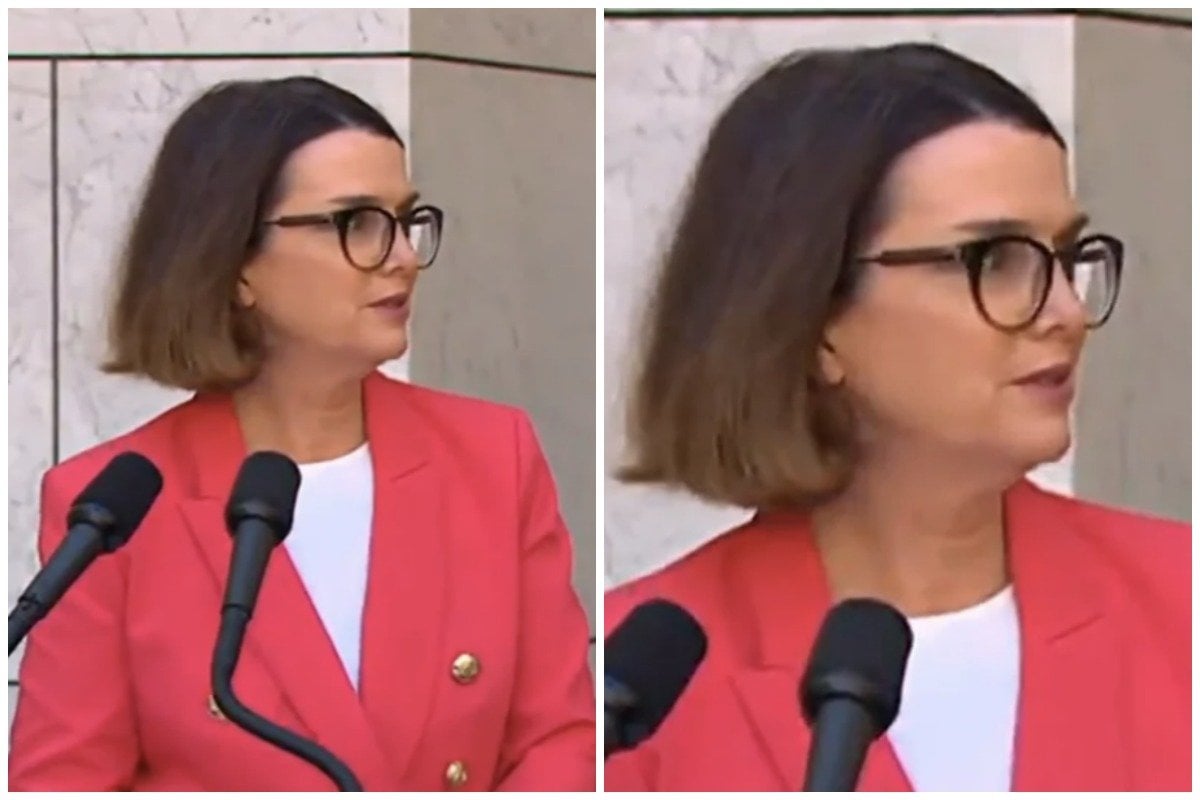 We were hoping they were distracted by the whole 'President-refusing-to-count-votes-that-weren't-in-his-favour' situation, but then someone found... it. And now the whole world is talking about the time Australian Prime Minister Scott Morrison perfectly exemplified sexism in politics when asked - or more correctly, the female minister beside him was asked - about misogyny in politics.

Here's a rundown in case you missed it.

On Tuesday, a journalist named Phil Coorey asked cabinet minister Anne Ruston, "As a woman in government, your reflections on the culture inside, has it got better, worse or no change since the 'bonk ban'?"

You can watch what happened right here. Post continues below.

The bonk ban refers to former Prime Minister Malcolm Turnbull's response to Liberal ministers having sex with their staffers, leaving them open to blackmail or compromise. Monday night's episode of Four Corners alleged that the 'bonk ban' was not just directed at then Deputy Prime Minister and Nationals leader Barnaby Joyce, but at multiple high-ranking members of the Liberal party.

Ruston, standing beside Morrison, began: "Well, Phil, the only thing that I can …"

But seven words in, Morrison decided he had something to say about all this. 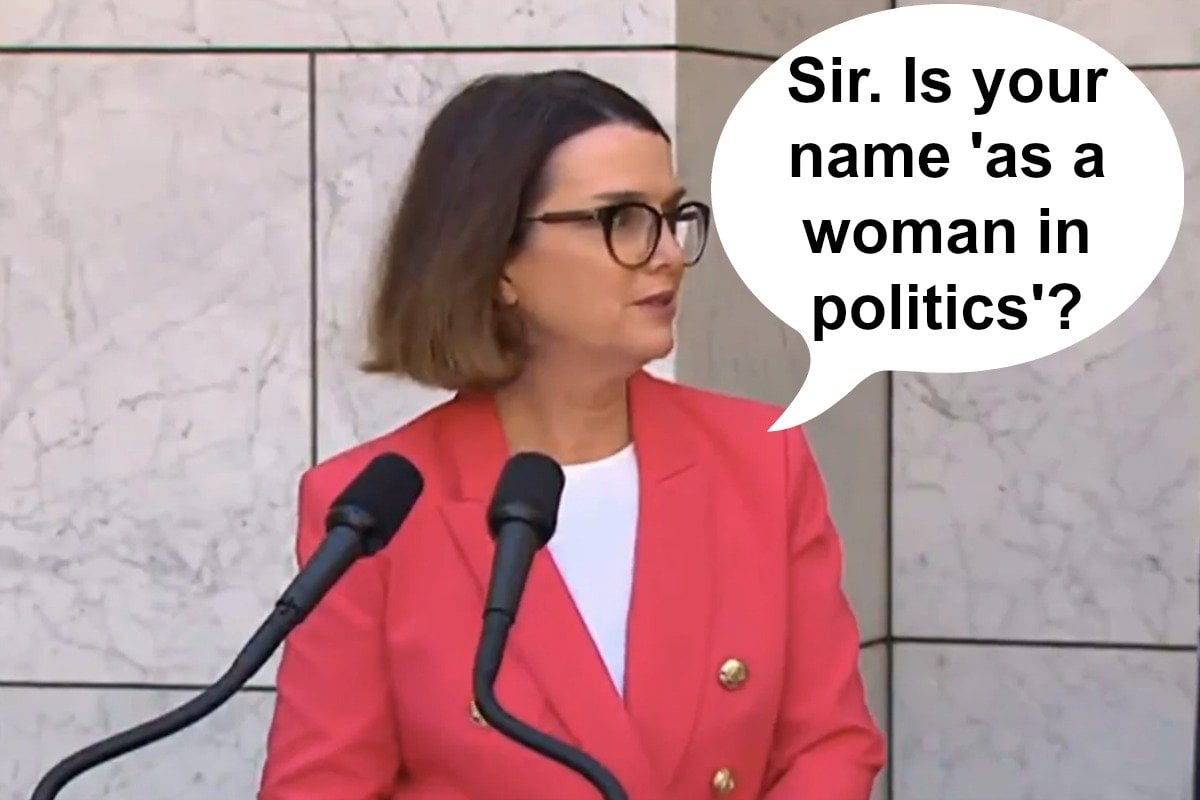 The moment became so uncomfortable that Coorey had to essentially ask his question all over again, while the PM's advisors made hush signs with their hands. (This is entirely speculative).

Viewers responded to the moment of profound irony immediately.

One thing I will say is it was ...surprising... during @ScottMorrisonMP’s press conference, when the actual woman in the equation was asked about the @4corners story last night on, you know, how tough it is for women in parliament, the PM jumped in and interrupted her.

EXCUSE ME, I’M SOMEWHAT OF AN EXPERT MYSELF: Looking out at strip of cafes along the banks of Canberra’s Lake Ginninderra, one might be mistaken for thinking they’re in Paris. The wind whispers over the water as it does down the Seine. Where the Notre Dame would sit, a Hungry Jacks does a roaring trade in the morning sun. A mocha with two handed to a hungover builder. A 14-year-old boy on a razor scooter calling you a fuckwit. This is Belconnen. And this morning, Scott Morrison was walking the banks with his security detail in tow. He was walking in a blue suit because the vintage Sharks gear that his bloke advisor found for him on Depop, eBay and Etsy hadn’t arrived yet. But his morning was interrupted, one witness said, because he overheard two women discussing a very personal topic. They were sitting outside The Lighthouse Bar having a coffee, cigarette and a catch-up. “Excuse me,” said our affable PM. “I couldn’t help overhear you two discussing your vaginas. Which one of you has endometriosis?” The women looked at each other then back to the Bigfella In Chief. “I bet it’s you because you are pale, meaning you have an iron deficiency. In my experience, endometriosis can be effectively controlled with ibuprofen and perhaps a warm wheat bag if you’re not made of sterner stuff,” “I’ve got advice that it’s not really that bad. So there you go. Now, would you girls like a photo with the Prime Minister?” More to come.

But then word caught on overseas.

First, BBC News ran the story, "Australian PM under fire for interrupting female minister," which explained, "the incident comes amid reports of sexual misconduct in parliament."

At the end of the article, text reads, "You may be interested in watching..." which leads to arguably one of the best videos of 2020, where the PM is yelled at for taking a press conference on someone's lawn.

"CAN EVERYONE GET OFF THE GRASS PLEASE?" the barefoot man in tracksuit pants yells live on television, before Morrison nods his head, "Sure, let's just move back from there," and why is this video still so funny. 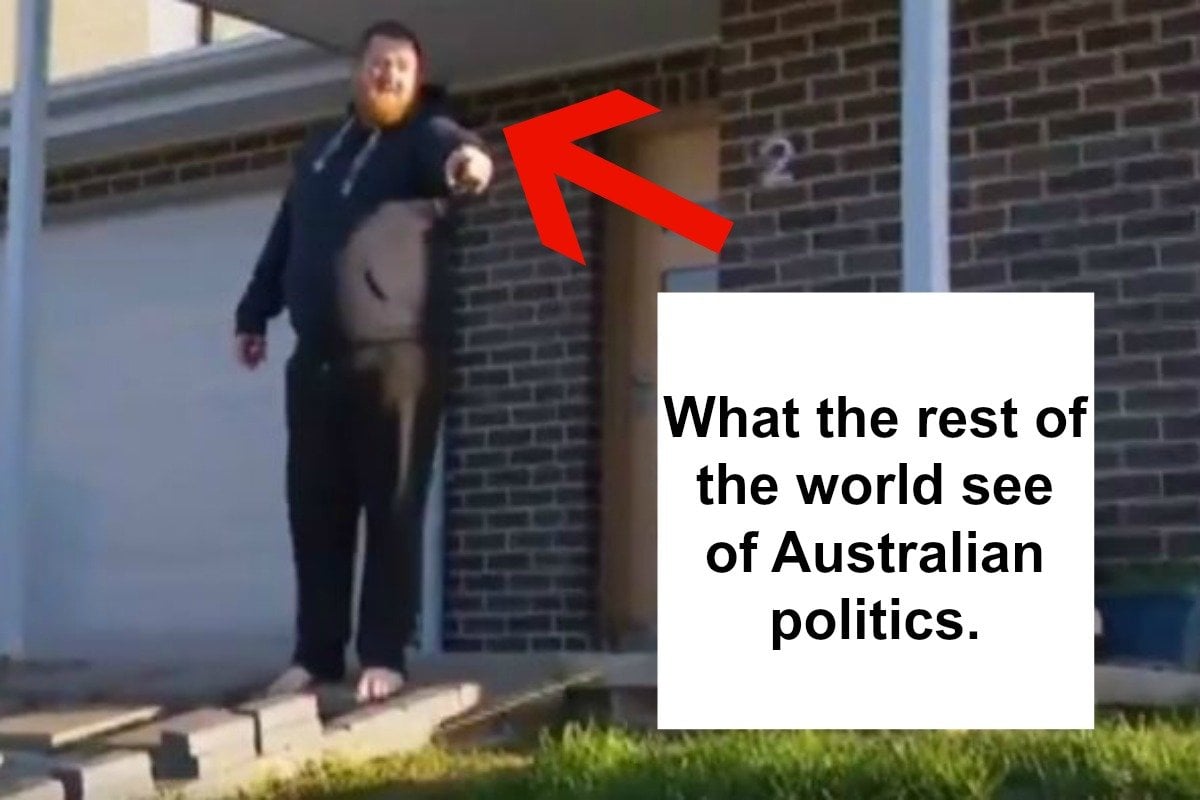 But it was The New York Times' coverage that attracted thousands of responses, with the headline "Australia’s Struggle With ‘Bonk Bans’ and ‘Manterruptions."

"He carried on at full paternal volume, apparently without noticing that he had cut her off. When he was done, he gestured to her to carry on," Damien Cave writes.

"For many, Mr. Morrison had revealed himself to be exactly the kind of leader that many women had suspected: a bloke’s bloke who assumes he knows what’s best and works hard to protect his mates even if they are accused of misconduct."

Misogyny rules supreme down under pic.twitter.com/j2C6ENGJzE

Dear New York Times,
This is a photograph of many of the government misogynists leaving the house as a woman makes her maiden speech. Says a lot about what Morrison approves of. pic.twitter.com/hNPRiSPkAe

Not super surprising. Just look at this display of ignoring @tanya_plibersek making a speech in the House of Representatives: pic.twitter.com/faV3H44d8r

There were also dozens of references to Julia Gillard's misogyny speech in October 2012, where she addressed the sexism exhibited by then opposition leader Tony Abbott.

While the now viral video might say something about Australian politics, its shareability is probably in part due to how many women personally recognise Morrison's behaviour. Most women know what it feels like to be spoken over or dismissed, in both professional and social settings.

In the end, the optics of Morrison speaking over the top of Ruston answered the question about women's treatment in politics better than words ever could.

As it stands, just 23 per cent of federal Liberal politicians are women. Until we get closer to 50 per cent, men's voices are inevitably going to be far, far louder.